Today's play would have a hard time living up to the energy and excitement levels displayed in the FIDE presidential election. Even the players in action were fascinated by what they might be missing during the rounds, and one top GM wondered if it was possible to find out the latest voting news during the game.

The story could be told in two tweets by Georgios Souleidis, the official Olympiad photographer present at the FIDE General Assembly. This was the scene as former World Champion Garry Kasparov made some final efforts to hold back the tide before the vote:

And here he is after the count was over and incumbent Kirsan Ilyumzhinov had again won by a landslide: 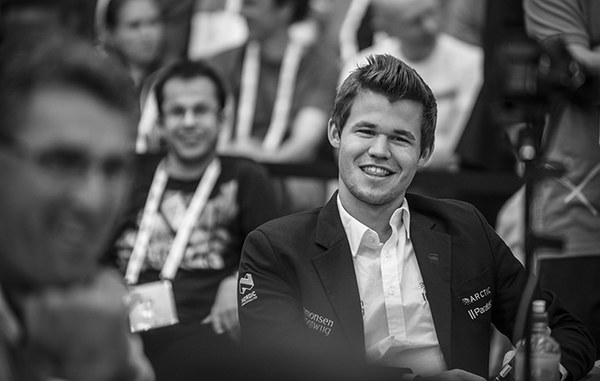 Magnus Carlsen was in high spirits before his game | photo: David Llada

NRK TV had a board reshuffle request arranged, so that Norway 2 could also be on main cameras today, since they were facing number one seeded Russia. This means that there was a smorgasbord of local chess action for Norwegian viewers, even if very few dared hope for the kind of upset the second squad pulled off against Ukraine in round two. They did have early grounds for encouragement when young IM Aryan Tari held Ian Nepomniachtchi to a draw on board four.

It was time to cast worried glances towards the world champion's board again. Magnus Carlsen appeared to be inviting real trouble against Turkish GM Dragan Solak, playing surprisingly risky chess with the white pieces.

There were few results in top matches in the first half of the session, but there were definitely some eye-catching moments. One of the quickest was from the always tricky Spanish GM Miguel Illescas Cordoba, who lured Latvian IM Toms Kantans into an absolutely wicked trap disguised as a combination.

19. ♖b8? Very tempting, but Black has a brilliant counterstroke up his sleeve.

Hungarian talent Richard Rapport was again involved in early violence. Yesterday he picked up a point when US GM Onischuk blundered a piece early, today Rapport sacrificed one to get some quick punches in against Israeli GM Emil Sutovsky, and looked to be on the way to another win against a top team. 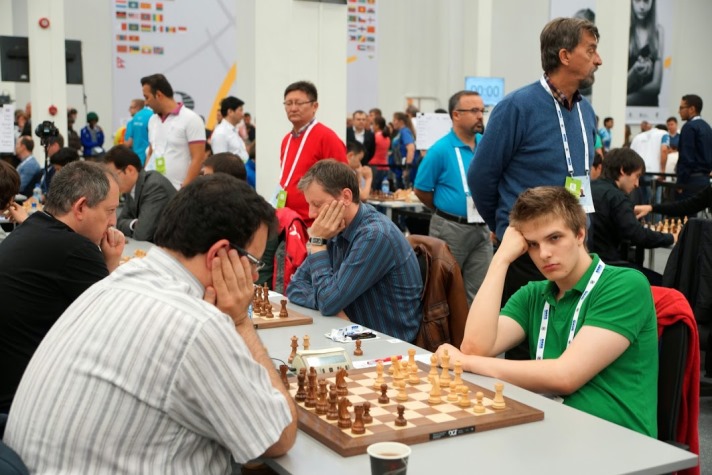 Top board Open match China-Ukraine had three draws recorded in the first three hours of play - the decision would come on board four, where teenager GM Yi Wei sacrificed a rook for perpetual check against Ukrainian GM Alexander Moiseenko, to shake off pressure and draw the match. The dropped match point means China can be caught by France, Azerbaijan, the Czech Republic or Romania.

The Women's group continues to be a pure duel - favorites China built up very dominating positions on their white boards to set the stage for another convincing match win against the 9th seeds France, but the front-running second seeds Russia were having a harder time with 10th ranked Armenia, with many sharp games - though still with every chance to come out on top again.

One of the most photographed scenes in Tromsø during the Olympiad has been the chess themed display window in the Fretex charity shop. Today the items in the window were auctioned off, but the people in charge of the shop did not seem to understand that holding the event at 10 in the morning was not the way to capture the maximum chess audience.

The auction, carried out using a gavel and a pot lid to deliver the final 'Gone!', sold off a few of the prime items, including an Asian style chess set for NOK 850 from an asking price of 150, but many of the unusual pieces are still available due to the low early morning turn-out. Some of the items still on offer are a Coca-Cola themed set and a pair of pink and black checked high-heeled shoes - as well as an assortment of other sets and a few books.

Tomorrow there will be plenty of local excitement - the Norwegian Prime Minister, the Conservative Party's Erna Solberg, will be in Tromsø to make the first move to open the penultimate round. She will also do a brief session with NRK TV, so there will be commentary from the highest level of the nation on Tuesday.

Olympiad action actually kicks off on Tuesday morning, 09:00 at the Tromsø courthouse, where a judge will hear the Russian Chess Federation’s lawsuit and assess the petition for seizure to guarantee that the organization holds sufficient assets to deal with any eventual legal action. 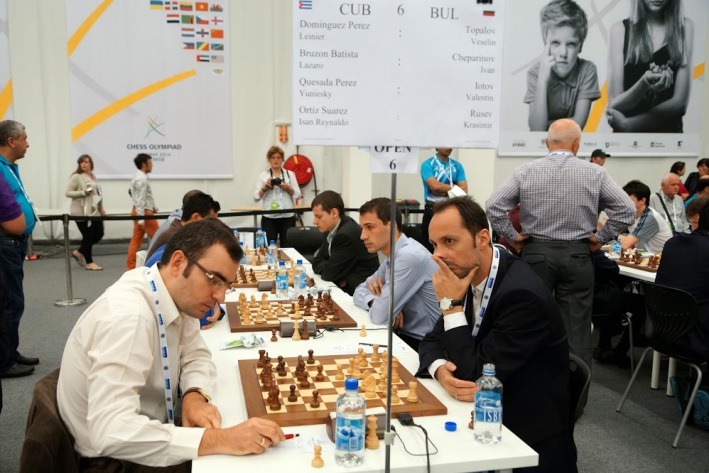 Veselin Topalov was one of the players who had to borrow clothes due to missing luggage - in Round 9 he faced Leinier Dominguez | photo: Paul Truong

The organizers had another milestone – the problems with baggage handling at Oslo Gardermoen Airport seem to have finally been solved, at least as far as the Olympiad is concerned; no new or ongoing complaints were registered on Sunday.

The Tromsø Olympiad information desk has been praised for their efforts to deal with what they could, and arrange insurance and compensation claims for those who have had to put up with horrific delays and needed to buy emergency wardrobes. The 'suitcase mountain' piling up at Oslo's international airport has been the subject of national TV coverage, and the Olympiad is just a high profile victim of this bottleneck.