Countless Norwegian and international volunteers are giving their all during the Chess Olympiad – and among them is local driving force Marit Næsvold. She’s putting in a big effort to ensure that many of those involved in the Olympiad are eating well and enjoying themselves, although she actually retired on the day the Olympiad began. 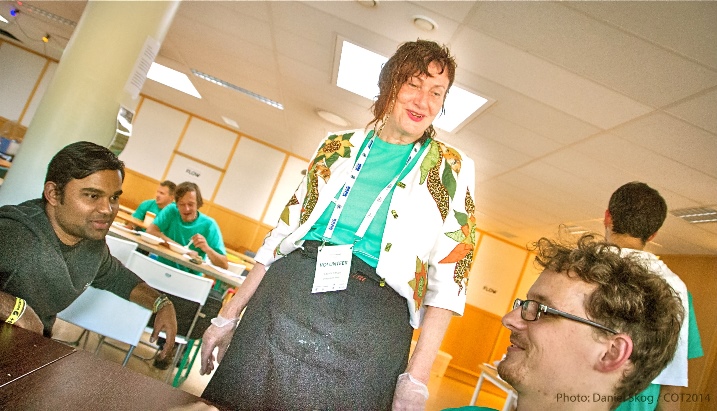 Marit Næsvold and the other members of the Chess Olympiad’s highly skilled kitchen team ensure the Olympiad’s many staff and volunteers are served good food and drinks – and not least have the opportunity for a pleasant break in the canteen | photo: Daniel Skog, COT 2014

The first thing that strikes you when you meet Marit Næsvold is her huge level of enthusiasm and concern. As she says herself:

As soon as I heard that the Chess Olympiad was looking for volunteers, I wanted to be involved and make a contribution!

As a volunteer hostess and cook, she is making a major contribution towards the implementation of this gigantic event. It’s no small number of people that Marit is taking care of during the Chess Olympiad. She’s the local delegation host for the teams from El Salvador and Slovakia, each of which number around 15 people. And as a member of the kitchen team, she’s serving meals to hundreds of staff and volunteers.

Marit thinks it’s wonderful that the “world is coming to Tromsø” and she is only too happy to contribute to implementing the Chess Olympiad | photo: Daniel Skog, COT 2014

Marit is listed for six shifts in the kitchen – and she also fills in a bit more when needed. On one of the first days of the Olympiad, Marit popped into the canteen in the evening. Dinner was being served to 150 arbiters and extra hands were needed. Marit, who had just returned from a performance of Chess in Concert, stepped in to help still wearing her high heels! “I happily take such things in my stride,” she said.

Hospitality of the highest level

As local hostess, she welcomed the two delegations on arrival at the airport and then showed them around the city. Marit has made an extra effort. She invited the delegation from El Salvador home for dinner and along with her daughter, Hege Næsvold Pedersen, served them an impressive North Norwegian feast! The Central Americans dined on smoked salmon, herring, fårikål (a traditional Norwegian mutton and cabbage stew), meat cakes, bacalhau, fish balls in curry sauce and capelin roe. This was followed by a desert comprising wafer cornets and cloudberry cream, sour cream porridge, rice porridge and Kvæfjord cake, which is also known as the ‘world’s best cake’.

I gave them some advice, such as not mixing porridge with the other food.

Tonight the Slovakians are visiting me at my cabin on the island of Kvaløya. I’m putting on a barbecue, and they can relax in the hot tub if they want to. My former son-in-law Morten Lønstad is the proprietor of the Steakers restaurant and he is donating a large amount of food. Perhaps the Eide Handel supermarket will sponsor something too. It’s nice to get some help, as otherwise the bill can easily run to several thousand.

Eide Handel is also sponsoring much of the food for the volunteers at the Chess Olympiad. 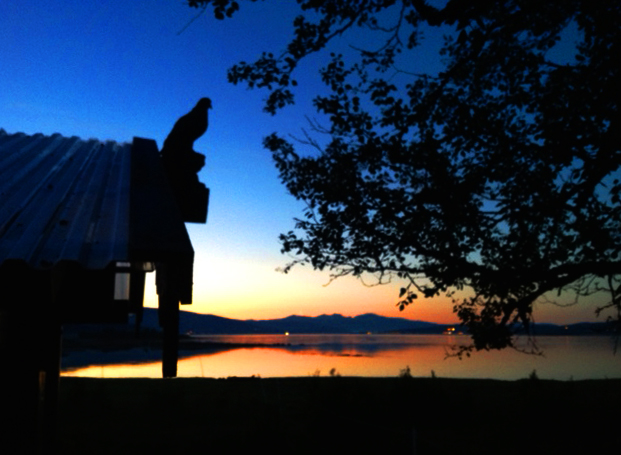 Tonight Marit is welcoming the Slovakian delegation to her cabin, which has an idyllic waterfront location on the island of Kvaløya | photo: private album

Marit, who is 70 years old, is a teacher. She retired on the very day the Chess Olympiad started, and the enterprising woman already has several educational projects in the pipeline. Marit has been active on the ‘international front’ all her life. She has travelled widely, lived in the USA for a period and 30 years ago was involved in organising a big carnival in Tromsø involving participants from South America. So voluntary work at a Chess Olympiad with 180 participating nations came naturally for Marit, who puts pride into thinking outside the box. She says with a smile:

I’m a local patriot as well as a citizen of the world.