FIDE dignitaries are not the only politicians visiting the 41st Chess Olympiad. When the organizing committee needed extra funds, Norway’s Liberal Party played a key role in convincing the coalition government to pay up.

Abid Raja, a Liberal Party MP and avid chess player, is visiting Tromsø along with party leader Trine Skei Grande and deputy leader Ola Elvestuen. He appeared on the official live broadcast of the Olympiad:


We are very proud to have the Chess Olympiad in Tromsø, and of course proud that it is going this well.

The government of relies on the Liberal Party for a parliamentary majority, and there is a written agreement to negotiate with them first. The Liberal Party spoke with the mayor of Tromsø, and soon felt very strongly it was wrong to risk a great sporting event.

Chess has a brand new position in Norway. Magnus and national broadcaster NRK cover chess extensively. This lifts the sport.

Raja will not compare the similar boom Norwegian chess experienced during the 80s, when GM Simen Agdestein came second in the Junior World Championship and at the same time played football on Norway’s national team, becoming the country’s first chess celebrity. Raja commented:

Magnus is the World Champion - he came from an environment that produced a superstar, and this is a good thing for Norway.

He is grateful the Carlsen parents gave their son the opportunity for chess success, taking a year off from school and work to travel with their four children. The MP has already started to pass on his knowledge of the game to his young children. Raja has happy memories of scholastic chess, where his team came 4th in the Oslo Championship, and an even better 3rd in the Norwegian Championship. Raja recalls: “My chess teacher in elementary school was ecstatic!” 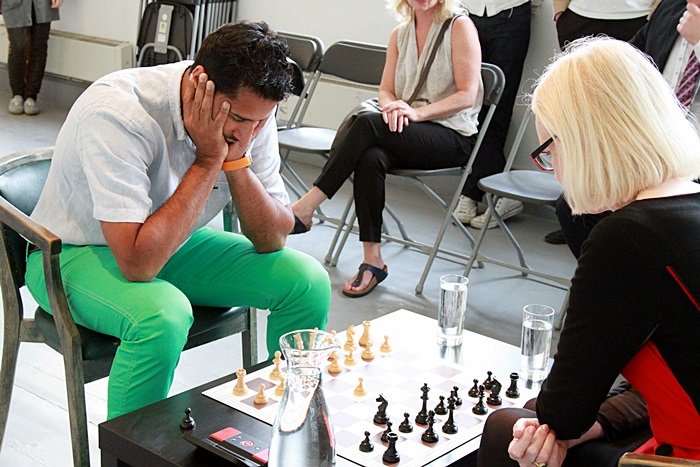 Abid Raja on the way to winning one of Ida Lorentzen's artworks! | photo: Georgios Souleidis

This background helped him win a unique artwork from artist Ida Lorentzen here in Tromsø:

It has the colours of the Liberal Party, and I am thinking of hanging it in my office.

Raja will be watching the Chess Olympiad for a few more days. He is not sure who to root for besides the Norwegian teams:

I worked for a year in the Norwegian Embassy in India, and hope their women do well. But their men are missing two of their best players and Russia is looking tough to beat.

The FIDE election has not gone unnoticed by the Norwegian politician:

It looks exciting, and I only hope it will be in accordance with the good values that come from transparency and democracy. Otherwise, I see no reason to speculate.


Abid Raja took a selfie with Garry Kasparov, currently the most visible politician in town:

And another with Tromsø itself in a starring role!