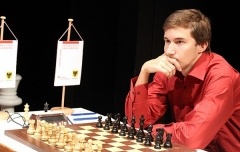 Prodigious even by the standards of chess prodigies, Karjakin broke the record for claiming both the International Master (11 years, 11 months) and Grandmaster (12 years, 7 months) titles. He won a blitz game against the then World Champion Vladimir Kramnik at 14, though he left it until he was 19 to win his first major tournament, Wijk aan Zee 2009. In the same year he took Russian citizenship — giving him access to better chess coaches and support — and married WGM Kateryna Dolzhikova.

Karjakin’s progress was seldom spectacular, but he quietly added to his haul of major tournament victories. In 2012 he acquired a sponsor and won the World Rapid Championship, while in 2013 he took clear first at the Norway Chess tournament ahead of Magnus Carlsen and Hikaru Nakamura. He proved that was no accident by repeating the same feat a year later.

That result, and Kramnik winning the 2013 World Cup, helped him qualify by rating for the 2014 Candidates Tournament in Khanty-Mansiysk. He started badly, and when he suffered a second defeat at the end of the first half it seemed he would struggle simply not to finish last. Instead he beat Svidler, Kramnik and Aronian in a run of form that saw him become the only player to truly challenge Viswanathan Anand. In the end, however, he had to settle for second place.

The couple had their first son in October 2015, just weeks after one of the most important and dramatic tournament victories of Karjakin's career, the 2015 FIDE World Cup in Baku, where Sergey came back from the dead against Peter Svidler.

The World Cup win qualified Karjakin for the 2016 Candidates tournament in Moscow, where, after almost three weeks of gruelling action, he emerged as the challenger to Magnus Carlsen for the World Championship title.

Few believed in the chances of Sergey in the 12-game World Championship match that took place in New York from November 11-30, 2016, but he proved his doubters wrong.

After some early scares he became increasingly confident before ending a sequence of seven draws by winning Game 8 in some style.

Sergey had Magnus deeply worried and came close to landing a knockout blow in Game 9. That ended in a draw, however, and when Karjakin missed a forced draw in Game 10 Carlsen seized his chance to level the scores. The remaining two games were drawn, making the match score 6:6, before Magnus emerged a 3:1 victor in tiebreaks.

Like many players after losing a World Championship match, Sergey has struggled to regain the chess level and motivation that brought him to the brink of the title. Although he won the World Blitz Championship shortly after the match, his 2017 was lacklustre at best.

He has a knack for performing when it matters, however, and in the 2018 Candidates Tournament, which he qualified for automatically as the previous challenger, he came very close to forcing a rematch against Magnus. He defeated Fabiano Caruana in Round 12 to tie for the lead, but Fabi found the strength to win the final two games and clinch the tournament.

For now Sergey is a sleeping giant, but as one of the members of the famous class of 1990 (including the likes of Carlsen, MVL and Nepomniachtchi) he's young enough to make another assault on the title.