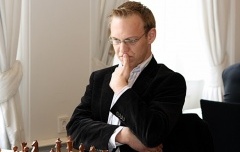 Markus Ragger is the best Austrian chess player and in a country with only a handful of grandmasters a clear standout. Markus learned the rules of chess at just three years old, and was quickly hooked on the game. He won everything there is to win in the way of Austrian youth national titles, and scored prominent results internationally, such as his 4th place finish at the 2006 U18 World Youth in Batumi, Georgia.

Ragger became a Grandmaster in 2008. That year he also won his first Austrian Championship, a feat he repeated in 2009 and 2010. Further strong European performances followed, including 6th place at the 2011 European Championship in Aix-les-Bains, France, 25th place the following year in Plovdiv, Bulgaria and the 18th place at the 2013 event in Legnica, Poland, qualifying for the World Cup each year.

Markus is a sought after as team player and is active in several leagues. In 2011 he won with ZSK Maribor in the Slovenian league, and the Bosnian League with Bosna Sarajevo, while in the German Bundesliga his SG Solingen team finished third in the 2011/12 season. There, his win over Icelandic GM Hedinn Steingrimmson was chosen by chess fans in Germany as the game of the season.

Markus lives in Graz, together with International Master Anna-Christina Kopinits, one of the strongest female players in Austria.

The following game was also from the 2011/12 Bundesliga season and was selected by fans as the second best game of the season, behind the aforementioned win over Hedinn Steingrimmson.

8... ♗f5 Typical for Vachier-Lagrave. He played this set-up already against many strong players without encountering any major problems. The idea of this move is to exploit the fact that Black now does not have to play Nb6.

9. ♖e1 White would love to occupy the center with e4.

9... ♕d7 The latest attempt to improve the variation for Black.

10. ♘a4! A novelty. This maneuver was employed already in similar positions, but here the move has two ideas: First White wants to play Nc5 quickly generate pressure against b7 with the bishop on g2. Secondly, White would like to play e4, without allowing the exchange on c3.

13. h3 Now Black has no space for his wayward bishop.

14... ♗xg4 15. hxg4 ♗xd4 16. ♘d3 ♕xg4 17. ♔f1!± gets out of the pins. Black has three pawns for the piece, but White is significantly better, since the piece is stronger. Black's pawns are split across both flanks and only one is a passed pawn.