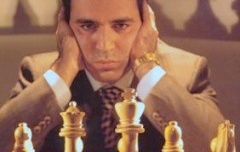 Many people’s choice as the strongest chess player of all time, Garry Kasparov was number one on the rating list for over twenty years and held the World Championship title for fifteen. As well as using a dynamic tactical style and deep preparation to dominate on the board he also dominated the public perception of chess, with his victories against Anatoly Karpov seeming to symbolise the new era of glasnost and perestroika in the Soviet Union. After retiring from chess in 2005 he became one of the leaders of the opposition to the Putin regime in Russia.

Kasparov was born Garik Kimovich Weinstein but adopted a Russified version of his Armenian mother’s surname Gasparyan after his father died when he was seven. From the age of ten he trained at Mikhail Botvinnik’s school and the scale of his talent soon became evident. He won the Soviet Junior Championship in 1976 and 1977 and as a 15-year-old was the youngest ever qualifier for the adult championship a year later. Kasparov’s triumph in the 1979 Banja Luka tournament in Yugoslavia saw him shoot up to number 15 on the January 1980 rating list, and he won the World Junior Championship later that year.

When Kasparov qualified for the Candidates Matches the 19-year-old was already rated no. 2 in the world, and after convincingly winning matches against Alexander Beliavsky (6-3), Viktor Korchnoi (7-4) and Vasily Smyslov (8.5-4.5) he topped the rating list.

His 1984 World Championship match against Anatoly Karpov represented an altogether different challenge, however, and nine games in he was facing a humiliating defeat after four losses. Kasparov then dug in with a sequence of 17 draws, but when he lost the next game it seemed inevitable Karpov would score the sixth win he required to win the match. Instead, when the match was controversially abandoned 21 games later, Kasparov had scored three wins.

England’s Nigel Short surprisingly beat Karpov in the next cycle, which was to have fateful consequences for world chess. Short and Kasparov were unhappy with decisions taken by the World Chess Federation and set up a rival Professional Chess Association for their match. Although Kasparov eventually scored a comfortable 12.5-7.5 victory he later regretted their decision, as it ushered in 13 years of split titles.

Kasparov defended his title once more against Viswanathan Anand in 1995, winning 10.5-7.5 after his opponent collapsed to lose four out of five games despite being the first to score a win after eight draws. Vladimir Kramnik had worked as Kasparov’s second for that match, which Kasparov may have regretted when he ultimately lost the title to his fellow Russian in 2000. Kramnik managed to stifle his opponent’s aggressive intentions to the extent that Kasparov failed to win a game, the first time that had happened to a reigning champion since Emanuel Lasker’s match against Capablanca in 1921.

After that setback Kasparov continued to win tournaments and regained his no. 1 position on the rating list, but he refused to take part in qualifying events for a new World Championship match, insisting he should be granted an automatic rematch. Other potential routes to the title through matches against the FIDE champions also fell through, and Kasparov’s announcement of his retirement in 2005 was partly motivated by frustration.

During his career Kasparov played five high-profile matches against computers, although those are now above all remembered for the World Champion first losing a single game in 1996 and then a whole match in 1997 against IBM’s custom-built Deep Blue. He has also been a prolific author or co-author of books on chess and other topics, and worked as a coach, both at the Botvinnik-Kasparov chess school and individually for the young stars Magnus Carlsen and Hikaru Nakamura.

In recent years Kasparov has been most prominent as a figurehead for the opposition to Vladimir Putin in Russia, a dangerous role that has seen him arrested on more than one occasion. He remains the world’s best-known chess player.