Hikaru Nakamura and Ian Nepomniachtchi jockeyed with each other for the lead and ended tied on 10/14 going into Monday’s final blitz round-robin at the Zurich Chess Challenge. Only a point behind them is Vishy Anand, who scored three wins in a row in the final two days of the new classical section. Vladimir Kramnik and Peter Svidler are still in contention on 8 points, with Kramnik having a score of one win (over Anand) and then six draws in a row, which in no way reflects how combatively he’s played!

Nakamura is gunning for a 3rd consecutive title in Zurich, but Nepomnniachtchi has been matching him step for step | photo: Russian Chess Federation

The standings after the New Classical games (worth 2 points for a win and 1 for a draw) are as follows:

You can replay all those games – and follow the blitz – using the selector below. Simply use the numbers at the bottom to switch rounds and click on a result or evaluation to go to that game. If you hover over a player’s name you’ll see all his results so far.

When we last looked at the Zurich Chess Challenge after three rounds, Svidler, Kramnik, Nakamura and Nepomniachtchi were tied for the lead. That didn’t last long, as Nakamura hung on for dear life in a draw with Kramnik and Nepomniachtchi blew Gelfand to smithereens.

Kramnik keeps drawing, though he was within inches of beating Nakamura | photo: Russian Chess Federation

The finish was as brutal as it gets:

Nepomniachtchi didn’t have long to savour his advantage since he lost to Nakamura in the very next round, with Svidler joining Nakamura in the lead with an unlikely win over Grigoriy Oparin.

Peter Svidler was forced to reflect on how times have changed in chess... | photo: Russian Chess Federation

We say unlikely not because it was a surprise Peter managed to beat his 19-year-old opponent with the black pieces, but because he turned out to be unprepared for 6.h4 in the Najdorf.

Peter was probably otherwise occupied in China while the rest of us can still hear Maurice Ashley’s voice ringing in our ears after the excitement of Daniel Naroditsky playing the move in his recent game against Zherebukh from the US Championship. Peter explained his emotions, as narrated by Vladimir Barsky for the Russian Chess Federation:

At some moment I met Vladimir Kramnik at the washbasin and said to him, “Volodya, how chess has changed!” He replied, “What, you’ve only just noticed?” As far as I understand, 6.h4 is a serious move; I’m a little behind the times.

Did you know about its existence?

Not particularly. Although, it seems, serious people have already played like that. For example, at the opening Yannick played like that against Boris, but I didn’t study that game carefully. Since here I choose the first move (and the second, and the fifth…) at the board, the decision to play the Najdorf was taken at the board, so in such conditions there are many things I’m not aware of. A serious move, and I got a pretty miserable position, and could have got an even more miserable one.

Luckily for Peter, though, he later got to play a “serious” move of his own: 25…Qb6!

He takes up the story again:

No doubt instead of 25.Bg3 it was stronger to play 25.Bxd6; I think the young man underestimated this, since 25…Qb6 is a serious move. It seems he wanted to keep the possibility of taking on d6 with the knight, but after 25…Qb6 I hint so clearly that serious counterplay is starting on the other side of the board that he has to take on g7, and as a result he wasted a tempo: he took two tempi to take on d6.

Strangely enough, after that I’m already playing for a win, because the g4-pawn can’t easily be taken, while the g5-pawn can; my king is closer to where all the action is taking place. And then it’s clear that White blundered 31…Nh3! After that his position is difficult, and most likely hopeless.

In general, life became interesting! I’ve been talking up that young man, and I continue to do so, despite managing to outwit him in time trouble. I really like how he plays.

How have you found playing with the new experimental time control?

It’s been ok. True, I still don’t really understand what to do with those 45 minutes – how to allocate them; I’m waiting until the blitz starts. In the game against Oparin, for instance, I spent 20 minutes on moves 8 and 9. There was, of course, a lot to think about, considering I already wasn’t in the know about the move 6.h4. After 9.Be2 I totally ceased to understand what was going on: there are these options, and those options. Overall, though, I consider that time control more long rapid than short classical. I don’t know if I’m right; perhaps the way I conduct the games shows that it’s actually short classical.

Svidler is not alone in being puzzled how to handle the New Classical time control, with 2700chess having to remove the games from their system:

Peter’s chances of winning the Zurich Chess Challenge suffered a blow when he lost a wild game to another old-timer, Vishy Anand, who has been playing like the Vishy of 25 years ago in Zurich, conceding only a single draw to Nakamura in the final round of New Classical chess: 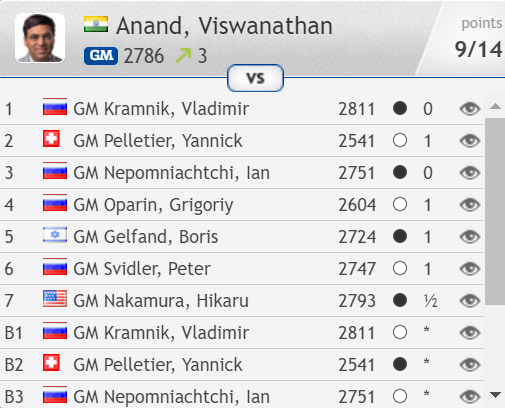 Against Svidler’s Sicilian, Vishy got in the typical sacrifice on e6, allowed the equally typical exchange sacrifice on c3 and then got the better of his opponent in the complications that followed. 28…d5? from Peter carried the threat of Bc5, skewering the two white rooks…

The oldest player in the tournament, Boris Gelfand, had suffered a tough three losses in a row to Nepomniachtchi, Anand and Nakamura, but he at least got to end in style against Yannick Pelletier, whose 15.Nh4 was asking for trouble:

The classic 15…Bxh2+! sacrifice wasn’t yet crushing in itself, but Yannick found himself resigning on move 23 – he failed to win a game in New Classical chess and may be remembering fondly previous years in which he was instead in the commentary booth!

Will the young guns of Nakamura and Nepomniachtchi increase their dominance in the blitz section. Can Nakamura win the event for a third year in a row? Tune in to the broadcast here on chess24 and find out! You can also follow the games in our free mobile apps: