Peter Svidler stopped Hikaru Nakamura’s charge on Friday as he turned the tables to win their Round 3 encounter. He starred off the chessboard as well, contributing over an hour of commentary to the live broadcast on a day that left him in the joint lead on 4/6 with Nakamura, Ian Nepomniachtchi, who beat Vishy Anand, and Vladimir Kramnik, whose two draws were a reasonable outcome from games he could have won and lost.

Nakamura was sole leader before he lost to Svidler in Round 3 | photo: Russian Chess Federation

On Friday Rounds 2 and 3 of the New Classical section of the Zurich Chess Challenge were played. You can replay all the games with computer analysis by clicking on a result below (or hover over a player’s name to see their results so far):

Round 2: Wins for Anand and Nakamura

The good news for chess fans in Round 2 was that Peter Svidler and Boris Gelfand drew a quick 23-move game, encouraging Svidler to join Danny King in the commentary booth, where he would remain for another 50 minutes. You can watch the full Round 2 show below:

The game saw Svidler repeat an idea of Maxim Matlakov’s that he’d used to get a winning position against Fabiano Caruana in the 2016 Moscow Candidates tournament. Gelfand deviated on move 9, though, as Svidler explained:

The thing about Boris is, apart from being a wonderful human being, he also works on chess quite a bit. This is my game against Caruana from the Candidates and he told me after the game today that he found the precise equality against that line as my game was in progress a year ago, because he felt what I was doing there was interesting and he felt it was worthy of his time to just figure it about.

Peter didn’t seem to be aware of it, but in fact the line played by Gelfand had already been demonstrated by Ivan Salgado against Igor Kovalenko in the 2016 French Top 12 Team Championship. Svidler only deviated from Kovalenko’s play when he played an accidental novelty on move 19:

Svidler had just spent 10 minutes developing a plan of playing 19.Qb7+ Kf6 20.e3, but then “played the 2nd move of the variation” with 19.e3 immediately. That meant that instead of the game continuing in a position still requiring some precision, there was an immediate draw by repetition.

Vishy Anand bounced back from his loss to Vladimir Kramnik to beat Swiss GM Yannick Pelletier in a French Defence.

Here Vishy’s 18.f5! pawn sacrifice was a very small price to play for the utter positional domination that followed, with Anand soon planting a pawn on h7. The only question was whether Yannick would be able to exploit the closed position to set up a fortress. The answer was a resounding no. 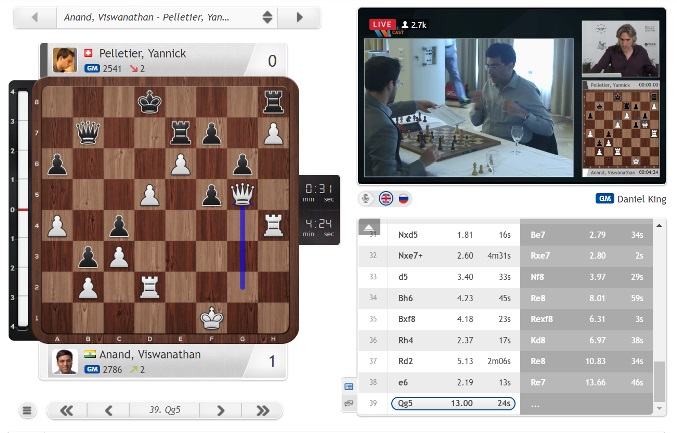 Vishy joined Danny King and apart, for instance, from revealing that he will play this year’s World Cup in an attempt to qualify for the 2018 Candidates Tournament, he also commented on the other games. One of those was Kramnik-Nepomniachtchi, where Vladimir had crashed through early on with an e5-break:

They reached a position where Vishy gave the summary verdict, “It’s a piece, in my expert opinion!”

It does look to have been clearly winning for White, though Nepo had two pawns for the bishop and Kramnik eventually came within a rush of adrenalin to the head of losing the position. Instead a draw was agreed was reached on move 58.

That left Hikaru Nakamura the chance to become the sole leader on 4/4, and he grabbed it by grabbing a pawn. Grigoriy Oparin played ambitious attacking chess with the white pieces, but was hit by a sucker punch:

25…Bxh3+! picked up a pawn, since 26.Kxh3 loses the queen to 26…Ng5+! Hikaru has shown exceptional technique in Zurich so far and went on to convert his advantage in impressive fashion.

There were two draws in Round 3, with relatively little incident in Pelletier-Oparin while Vladimir Kramnik hung on for dear life in a difficult ending against Boris Gelfand. The other two games were decisive, though, and of great importance for the standings.

You can watch the commentary below:

Svidler had finally taken his leave of commentary duties on the previous round, after over 50 minutes, by starting a sentence, “If I say I have to prepare for my next game people will laugh in my face...”. What followed in that game against Hikara Nakamura was an English Opening where Peter wasn’t a huge fan of his own play:

First and foremost, as the old warning goes… don’t try this at home! This is not the way to play this line.

Peter described the position he got as one where, “you generally grovel for two hours”.

Svidler: "The old Soviet school of count the number of pawn islands still holds true after all these years"

It looked as though Nakamura was well on his way to 6/6, which would have given the winner of the last two Zurich Chess Classics a 2-point lead over the field. Instead, though, the tables turned dramatically on move 23, when after 23.Qf2? Black’s problem piece was suddenly able to return to the fray:

23…Nf5! There was nothing better for Hikaru than 24.exf5 Rxc3 25.Rxc3 Rxc3, when White’s shattered pawn structure proved a nightmare to try and hold together. Svidler went on to win in 49 moves,

The other game, Nepomniachtchi-Anand, followed a similar script. Ian said Vishy had surprised him on move 1 by responding to 1.c4 with 1…c5 and summed up that it was, “one more extremely stupid game in the opening, from my side”. It looks as though Anand was correct to go for a risky pawn grab, but when Nepomniachtchi managed to consolidate the Russian said he was ready to offer a draw before realising that Sofia Rules wouldn’t permit it.

Instead a dance went on which turned out to be a dance of death for Black. Although Vishy still had an extra pawn, which became a passed pawn on c3, his king was dangerously exposed. 37.Rg2+ would already have won for White, but fortunately for Nepo he got the chance to play it on the next move, when things were soon over. 41.Re2+! ended the game, since Black won’t be able to stave off mate for long. 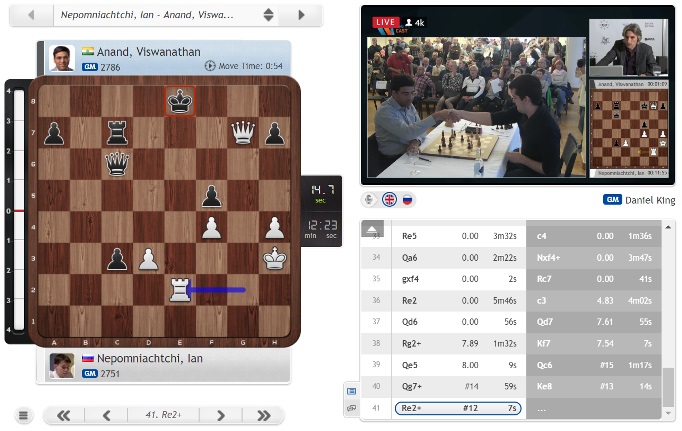 Those games meant that after three rounds of New Classical chess (rated as rapid by FIDE), we have a four-way tie for first place:

The event continues with two more rounds a day on Easter Saturday and Sunday, before 7 rounds of blitz (worth half as many points) on Monday. You can watch here on chess24 and also in our free mobile apps: