Magnus Carlsen ended Day 4 of the SuperUnited Rapid & Blitz Croatia with a 1.5-point lead over Wesley So after winning seven blitz games and losing two. Where does he need to improve on the final day of the event? “I hope I will not lose like an idiot to Wesley again!” 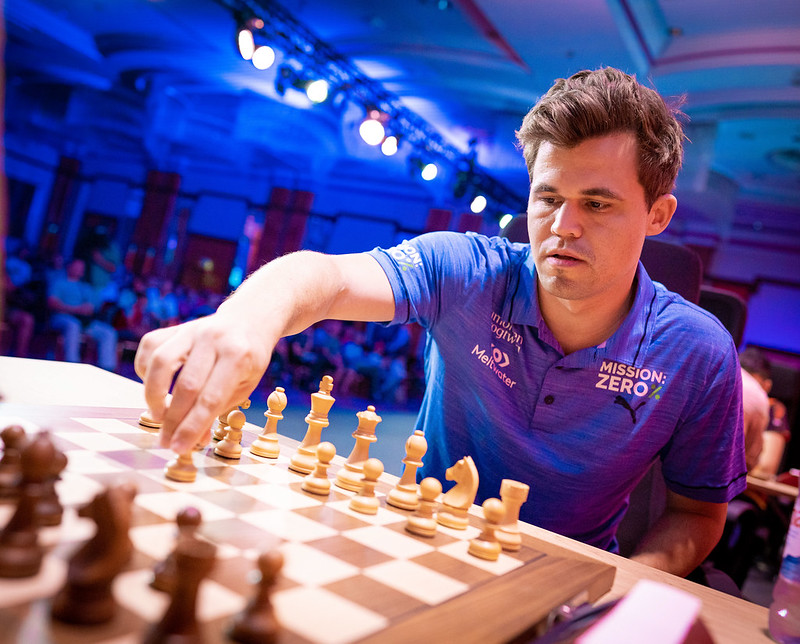 You can replay all the games from the SuperUnited Rapid & Blitz Croatia using the selector below.

Magnus Carlsen ended the rapid section in Zagreb in a tie for 2nd place, a point behind Jorden van Foreest, and then immediately beat Jorden in the first game of blitz to catch him in the lead. He commented:

The game wasn’t great but I was always trying to keep a lot of pieces on the board and make him think, and finally he made a few mistakes.

There was a picturesque final position.

There would be a two-game bump along the way, but it ended up being a great day for Magnus.

I felt like my play was pretty shaky throughout most of the day, but I won a bunch of these very nervy time-trouble duels where nobody really knew what was going on, so I guess overall while in the rapid I think I could have scored more, today I probably scored a little more than I should have. 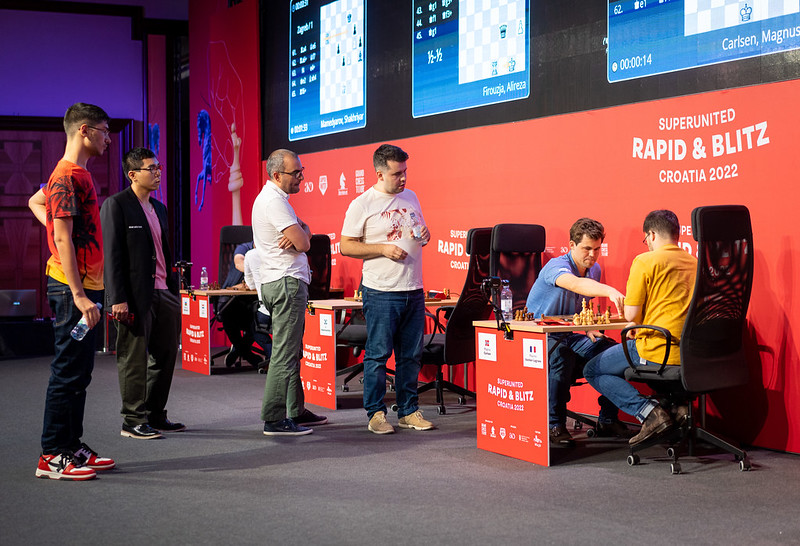 Magnus recovered from two losses to win a wild game against MVL — with Nepo, Dominguez, So and Firouzja looking on | photo: Lennart Ootes, Grand Chess Tour

He was asked if he navigated the complications better over the day.

I guess navigate "better" is the operative word. I don’t think I always navigated it so well, but it felt like I was always one step ahead of my opponent in those situations. It was a crazy day really, not one that I’m massively proud of, but it’s still pretty cool to have played no draws at all.

One crucial win came against Ian Nepomniachtchi, who with 6.5/9 was the 2nd top scorer in the blitz. The game looked very drawish until Nepo’s 35.Nc3? (simply 35.Re3 holds), which only looks as though it defends the e2-pawn.

Magnus pounced with 35…Bxe2! and the knight can’t capture the bishop or the c5-rook falls.

After 36.Ra2 Magnus was a pawn up and went on to grind out a win, which by the end of the day left him 2.5 points clear of Nepo.

In hindsight Ian perhaps wishes he tried the King’s Gambit against Magnus, as he did earlier in the day against Leinier Dominguez and Shakhriyar Mamedyarov! Nepo scored 1.5/2 using one of the most famous openings in chess, and one on which he published a Chessable course.

The closest challenge to Carlsen comes from Wesley So, who is 1.5 points back after beating Magnus convincingly in their head-to-head clash. When Magnus was asked how he could improve on the final day, he commented, “I hope I will not lose like an idiot to Wesley again!”

Wesley described his day as “solid” — his 5.5/9 was matched by Leinier Dominguez, who also beat Magnus — and when asked about catching the leader he commented:

It’s very hard to catch Magnus — he’s the no. 1 player. I was hoping that he wouldn’t get going! In the rapid it seemed like he wasn’t playing his best, he lost to Shakh and missed a lot of chances, but winning five in a row in blitz… blitz is about rhythm.

The game Wesley regretted was his only loss in 18 rounds, to Jorden van Foreest in the round after the Magnus win. 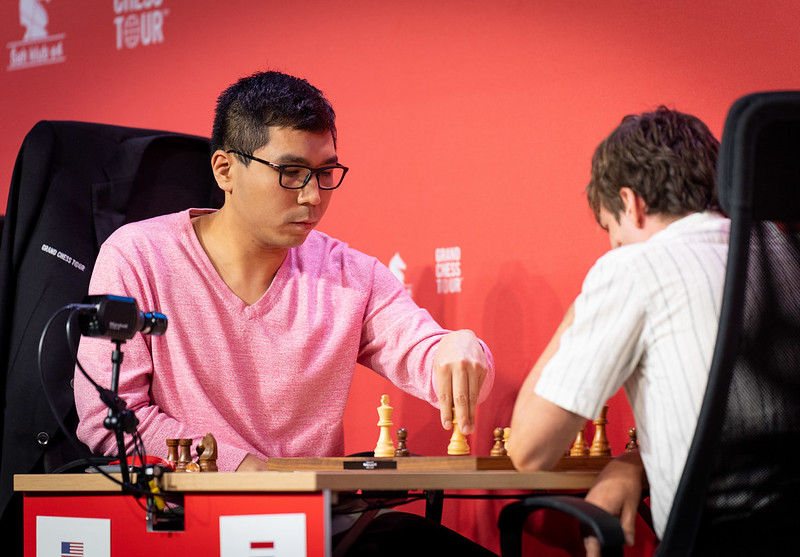 Jorden is the only player to have beaten Wesley in Zagreb so far this year | photo: Lennart Ootes, Grand Chess Tour

Wesley had been winning, and then later there were multiple chances for White to escape, including in the pawn endgame, when 47.a4! would still have been a draw.

47.axb4? instead enabled Jorden to end the day just half a point behind Wesley, and the Dutch star was very happy with his 4/9, considering the opposition.

I’m comparing myself to these blitz monsters. I don’t think I’m a good blitz player. I would beat most people, but these guys are just on another level, I would say. They’re just so sharp and so insanely good, it’s very hard to play against them and to score any points at all.

Maxime Vachier-Lagrave also scored 4/9, but the Frenchman was coming from so far back that it’s left him out of contention for 1st place.

The biggest shock of the day, perhaps, was how badly the other Frenchman did. Alireza Firouzja, the 2019 World Blitz silver medallist, scored just 3.5/9, with his only win of the blitz coming against Jorden in the final round. His day was summed up by blundering his queen against a fellow struggler, Ivan Saric.

That leaves the standings as follows going into the final day: 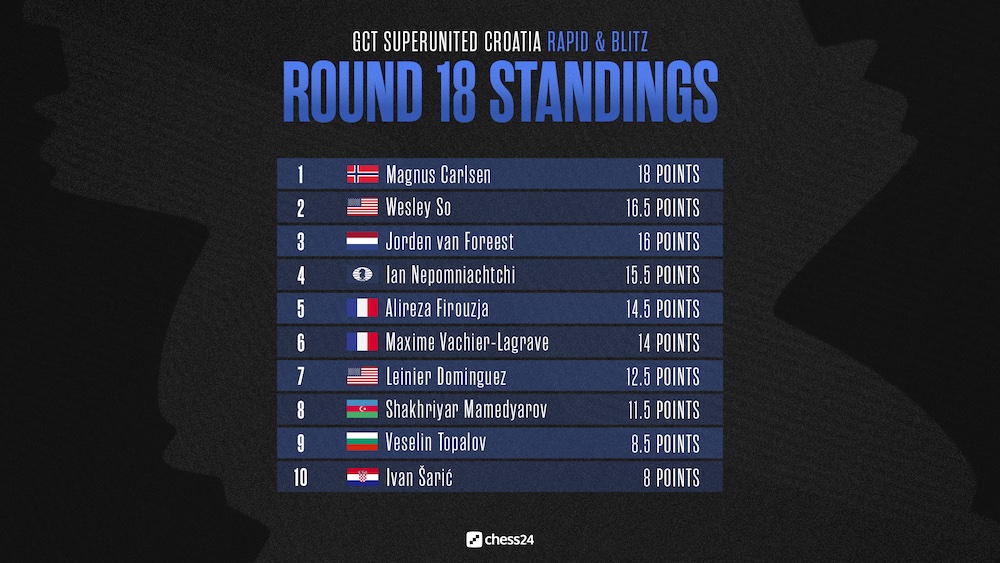 The action starts one hour earlier on Sunday at 14:00 CEST.