Jorden van Foreest described it as “pretty surreal” as he took down Alireza Firouzja in the final round of rapid chess to top the table before the SuperUnited blitz games begin in Zagreb, Croatia. It’s incredibly tight at the top, however, with Firouzja, Magnus Carlsen and Wesley So all just one point behind. 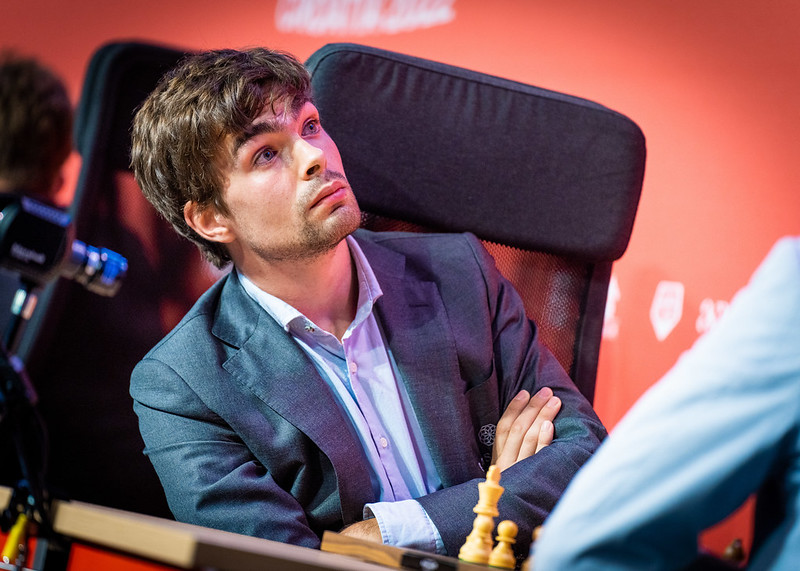 You can replay all the games from the SuperUnited Rapid & Blitz Croatia using the selector below.

In the 2021 Croatia Grand Chess Tour Jorden van Foreest scored just two wins in 27 games, and none in rapid, as he finished bottom of the table.

No-one could have predicted, therefore, that just one year later the 23-year-old Dutch star would end the rapid section in the sole lead after winning five games — no-one else managed more than three! 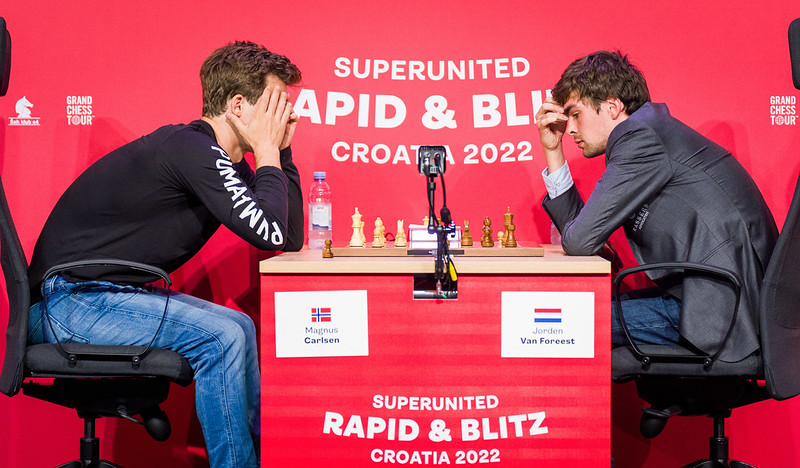 That didn’t mean it was easy. On Day 3 Jorden began with a comfortable win over Veselin Topalov, but was then put to sword by Magnus Carlsen after going for an offbeat opening against his former World Championship preparation boss.

Then in the final round of the day Jorden faced Alireza Firouzja. The 19-year-old had led after the first two days and seemed to come into the final day of rapid with the intention of playing solidly to consolidate his lead.

In the final round he just needed a draw to guarantee at least a share of first place (in fact it would have meant sole 1st place), and played the Berlin. 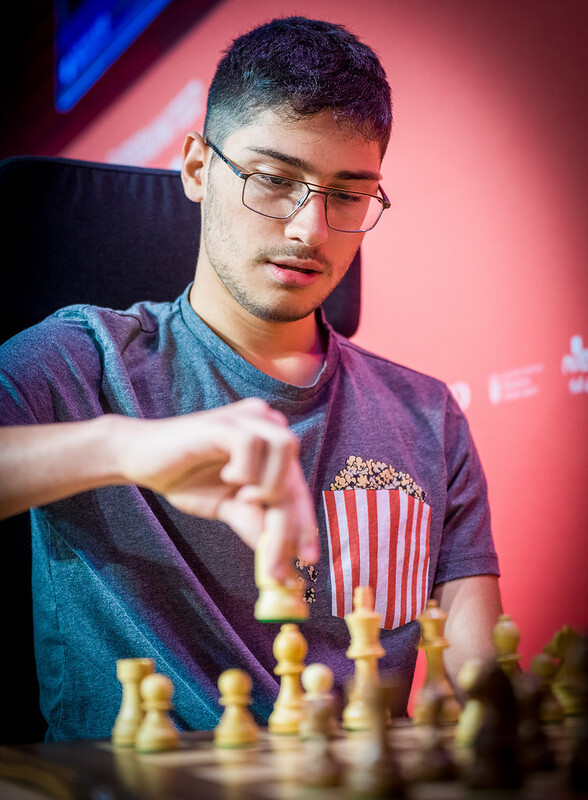 A draw seemed on the cards, but then Alireza completely lost the plot in the middlegame and came under a crushing attack. Jorden commented:

The games I’m winning, everything is flowing smoothly for me and I’m really getting the kind of positions that I like.

This time, however, there was turbulence, as Jorden missed the best way to continue the attack and was hit by 28…Qe1+! 29.Bf1

With Alireza you have to be extremely careful — he’s just so incredibly tricky!

Suddenly the black king is caught in a mating net, with no good defence.

Firouzja resigned, and Jorden had won the rapid section. “Pretty surreal, I have to say!” he summed up, though his leading the table is unlikely to fill his rivals with terror — as Jorden himself said in a previous interview:

I prefer blitz, but I’m much better in rapid! I think it’s my worst time control. I’m looking forward, but also I’m a bit scared it’s going to fall to pieces.

The event in Zagreb is wide open, with the pack of players just a point behind including not just Firouzja, but Magnus Carlsen and Wesley So. 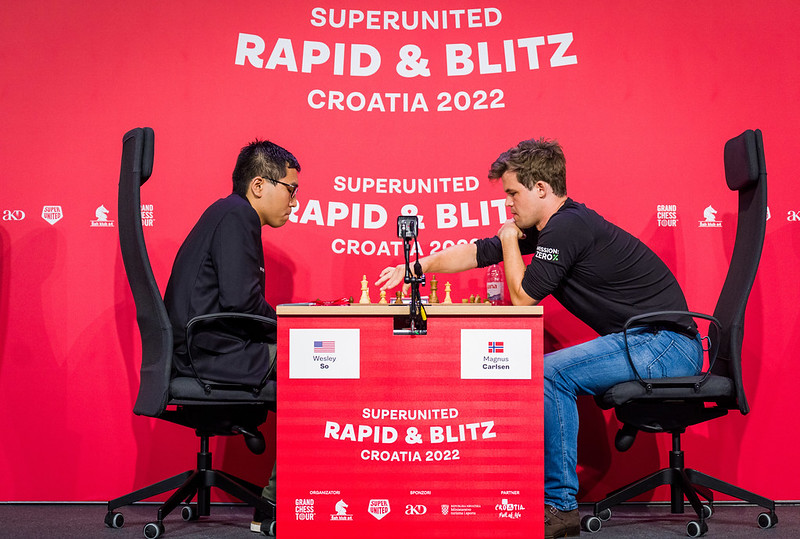 Their clash at the start of Day 3 summed up their differing approaches. Wesley, as Jan Gustafsson predicted, played the super-solid Exchange Slav and was ready to take a draw on move 9.

In hindsight, “embracing the chicken” would have saved Magnus a lot of nerves!

When the draw came it was only after Magnus had taken over and got a winning position, but then allowed Wesley the fine resource 45.Nxce4 dxe4 (45…Qh8!! was winning, but anything but trivial) 46.d5+!

Suddenly it was level, and Magnus almost lost when he kept on pushing for a win. Magnus summed up, commenting after beating Jorden van Foreest:

Overall I think I’ve played ok until I get in time trouble, and then I just played horribly, so my time management hasn’t been good, but there has been some improvement. I lost a game I never in a million years should have lost, I definitely should have beaten Dominguez. It’s not as bad as the score suggests. I feel like I’m playing myself into reasonable shape. I have one more game, then a lot of blitz to look forward to.

Magnus won that remaining game, against Ivan Saric, to leave him exactly where he needs to be.

Wesley So, meanwhile, was also briefly lost in the final game against Shakhriyar Mamedyarov, but then defended brilliantly to hold a draw and go into the blitz as the only unbeaten player. 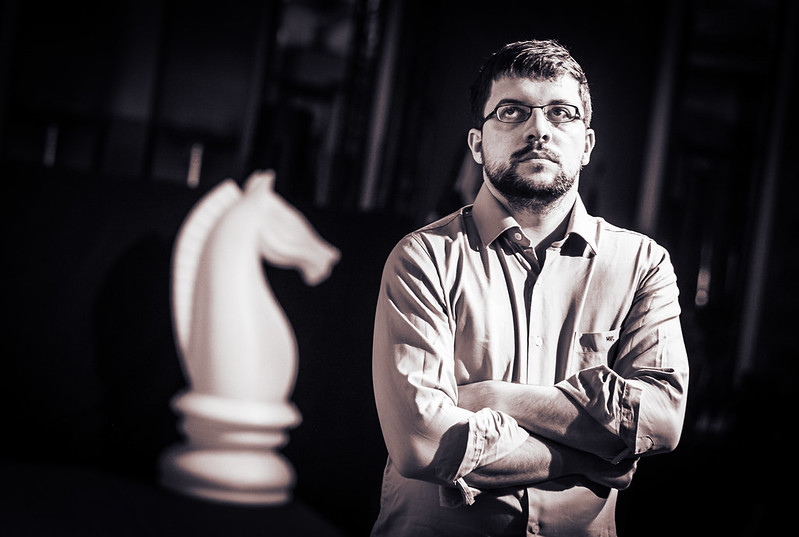 Just one point behind those players is Maxime Vachier-Lagrave, who had an incredibly eventful day and could have been unbeaten and in the lead if he’d spotted a win on move 9 against Ian Nepomniachtchi.

9.c4! is a killer, since if Black takes the pawn and opens up the d-file then Ng5 and then Nd6+ will cost the black queen. If you don’t take the pawn then cxd5 is lethal for Black, in various painful ways.

Nepo dodged that bullet as Maxime played 9.Bd3 after 12 seconds, however. Nepo was asked if he’s in shape.

If there’s an antonym to the word “in shape” that’s my case! Well, I was lost after 7 moves, I could resign, but then he didn’t play c4 and it was quite playable then.

Ian in fact went on to win with a checkmating attack.

Nevertheless, that win was a turning point, since Nepo also won the next game against Veselin Topalov. It should have fizzled out into a draw, but 23…g6? completely missed the point of Ian’s previous 23.Ra1.

After 24.Ra6! Veselin suddenly had nothing better than to resign, since he can’t evacuate both the b4 and b3-bishops from the coming double-attack 25.Rb6. If he’d spotted that in advance then simply 23…Bf8 or 23…Be6 would have saved the day.

As it was, Ian Nepomniachtchi is another brilliant blitz player who’s just two points behind his likely main rivals, while you couldn’t even rule out Shakhriyar Mamedyarov if he suddenly caught fire. 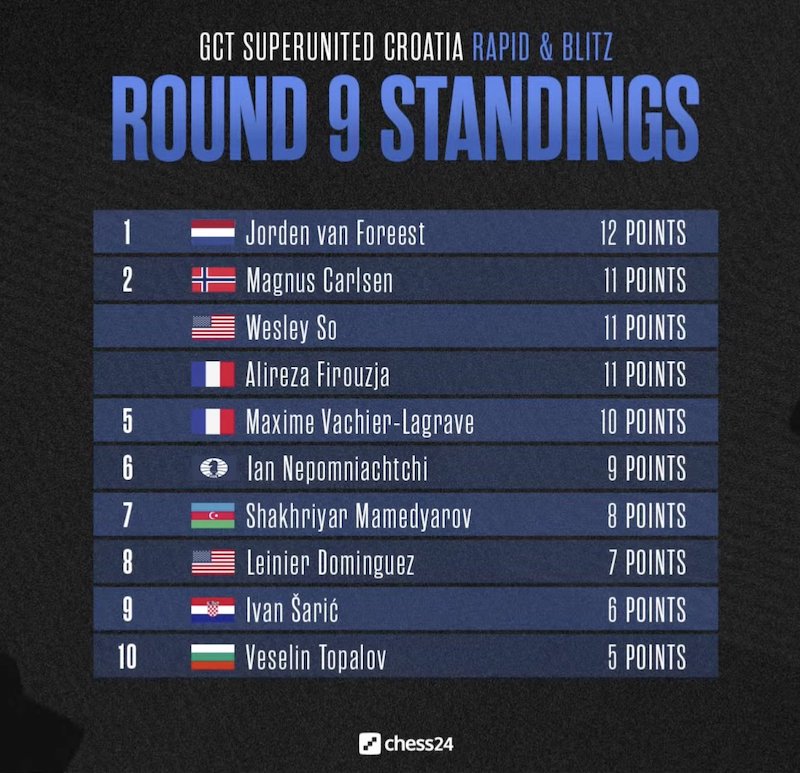 The tournament in Zagreb speeds up now with 18 rounds of 5-minute blitz spread over Saturday and Sunday.