Magnus Carlsen's tough start to life no longer fighting for the World Championship title continued in Zagreb on Thursday, as he lost to Shakhriyar Mamedyarov and then missed a win against Leinier Dominguez. Alireza Firouzja leads after winning a wild game against Shakh. 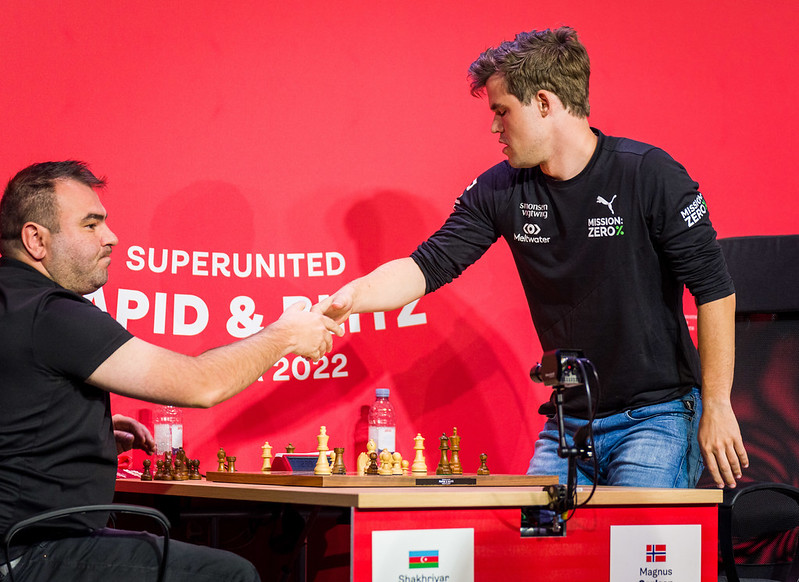 You can replay all the games from the SuperUnited Rapid and Blitz Croatia using the selector below.

19-year-old Alireza Firouzja leads after Day 2 of the SuperUnited Rapid & Blitz in Zagreb, Croatia, with Magnus Carlsen 3 points off the pace. 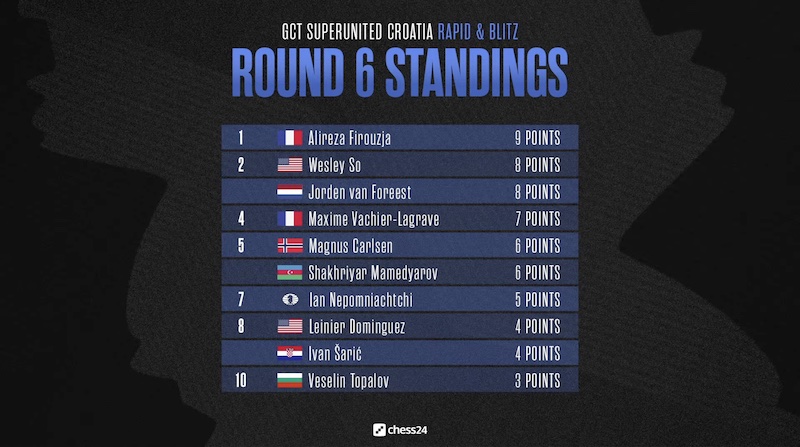 That could have been very different if Magnus has won their clash in the first game of the day, but it was Alireza who sprung a surprise in the opening. He criticised Magnus for meeting the rare 12...Nc6 with 13.Rd1!?, though Magnus' move had the virtue of getting Alireza thinking, since he didn't remember the punishment.

Maybe I was better a little. He wanted to bail out of course here, because he has no winning chances.

It looked hyper-sharp to the untrained eye...

...but with Magnus and Alireza wielding the pieces it fizzled out into a draw.

If that was frustrating for Magnus, the next game was even worse, as Shakhriyar Mamedyarov sacrificed an exchange and then found a winning queen manoeuvre.

Time trouble made Magnus' position doubly dire, and he ultimately lost on time. Mamedyarov confessed he wasn't sure about the exchange sacrifice, but he was happy!

I was very happy in my position because when it’s equal, I’m every time happy — it’s not a drawn position, I will just play, and he made some mistakes in Zeitnot [time trouble] and I won!

If there's one thing Magnus has specialised in over his chess career it's instant comebacks, and he was very close to pulling off another one against Leinier Dominguez.

It turns out 31.Rxg6+! was the only win, with Magnus winning the a8-rook with a check on b7 or c6, depending how Black captures the rook. It's still very tricky, though, with the point being the queen can come back to g2 to defend, while the a-pawn will win the game.

Instead after the entirely natural 31.Qxe5+ Kh7 it turned out White had no win, as Leinier brilliantly demonstrated. 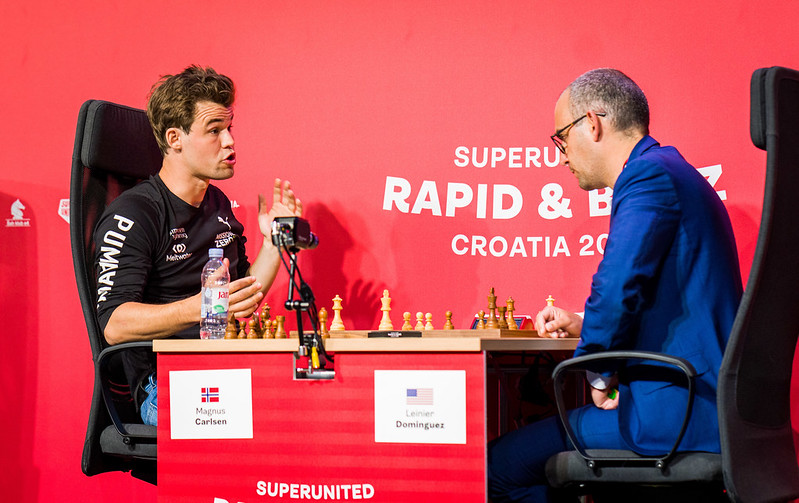 The one that got away! | photo: Lennart Ootes, Grand Chess Tour

For a while it looked as though we would have a 3-way tie at the top with Alireza Firouzja joined by Wesley So, who won the first game of the day against Ivan Saric...

...and Jorden van Foreest, who crushed Ian Nepomniachtchi in the final game of the day, after nearly beating MVL in a 104-move marathon, and then taking a draw in a wild but winning position against Ivan Saric.

In the end, however, Alireza Firouzja beat Shakhriyar Mamedyarov in the final game of the day to retake the sole lead. Both players had had a very eventful day.

As well as beating Magnus, Shakh escaped when Veselin Topalov took a draw in a winning position against him, while Alireza was in big trouble against his French colleague Maxime Vachier-Lagrave. 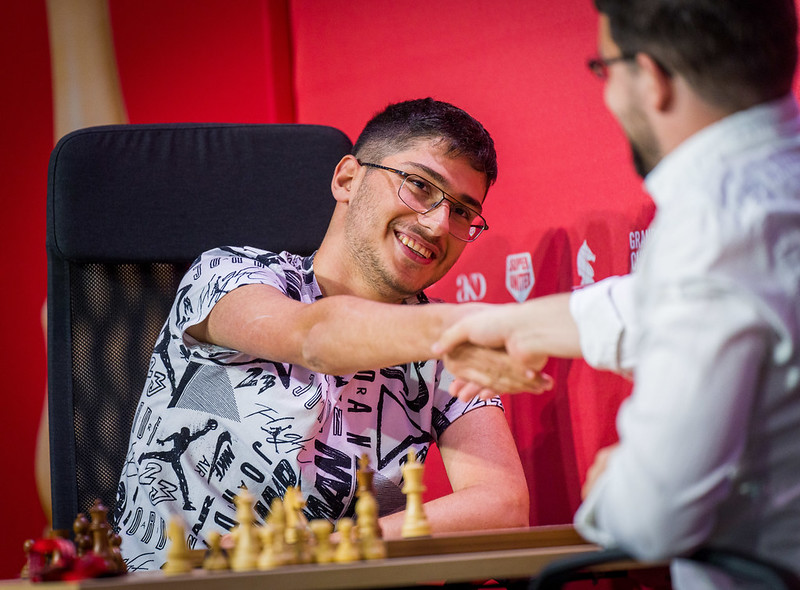 The final game was just as crazy, with Alireza building up a huge attack against Mamedyarov, but letting his opponent escape until the game should have ended in a draw if not for a miscalculation you could only explain by fatigue.

After 62...Nd4?? the computer's flash +152 pawns evaluation emphasises just how bad a move it was! Alireza gratefully exchanged knights with 63.Nxd4 Kxd4 and after 64.f5 the pawn race wasn't even close.

So Alireza still leads going into the final day of rapid chess in Zagreb, though after that there are 18 rounds of blitz to follow over the weekend!