Yu Yangyi and the Curse of Caruana

20-year-old Chinese Grandmaster Yu Yangyi has won the Qatar Masters Open after beating ex-World Champion Vladimir Kramnik in today’s final round. You could call it the Curse of Caruana. Both Anish Giri and Kramnik put together streaks of six wins in Doha, but just when they had a chance to match (at least numerically) Caruana’s seven in St. Louis they fell to defeat. Giri caught Kramnik on 7/9 and even snatched second place bragging rights, though both players take home $12,500 for their efforts, while Yu Yangyi gets $25,000 for his 7.5/9. 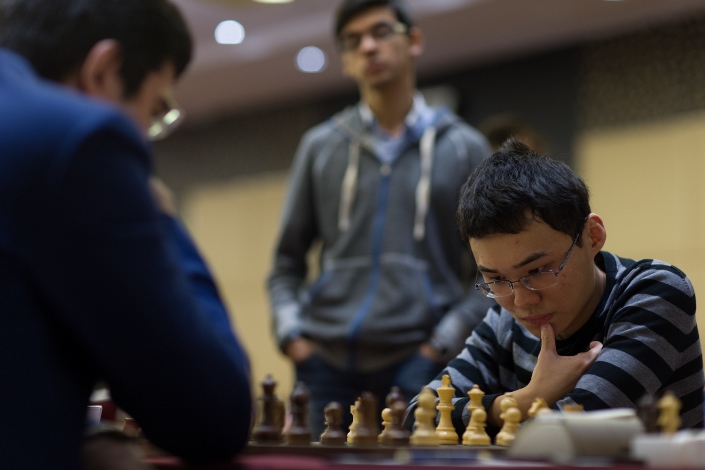 A photo to sum up the tournament - superstars Anish Giri and Vladimir Kramnik could only look on jealously as the modest Chinese player emerged triumphant | photo: Maria Emelianova, Qatar Masters

Vladimir Kramnik’s task was simple – draw with the black pieces and head to the London Chess Classic as the Qatar Masters Open Champion. His opponent, however, had beaten top seed Anish Giri the day before, posted the best performance of any player in the 2014 Olympiad and had unfinished open tournament business after missing a straightforward win that would have guaranteed him at least $50,000 from the Millionaire Open. He also won the pre-game contest... "Is that Kramnik with a "K"?"

Jan Gustafsson takes us through the game:

The first post-game interview with Daniel King was pure comedy gold, since it soon turned out that the young Chinese player knew barely a word of English, leaving Daniel to supply the answers as well as the questions, although Yu Yangyi did manage, “I am English no good,” at one point.

An interpreter was later provided, which took some of the fun out of the proceedings. 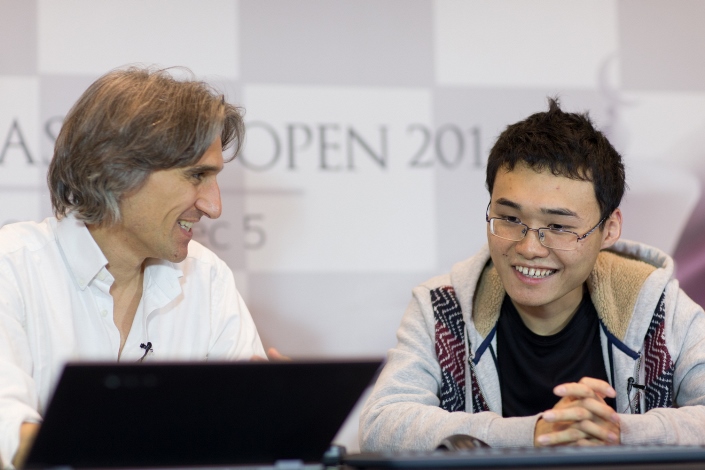 Daniel King and Yu Yangyi participate in one of the most surreal post-game chess interviews we've ever witnessed | photo: Maria Emelianova, Qatar Masters

Yu Yangyi explained he was studying Sports Economics at Beijing Sports University, with a flexible curriculum that didn’t get in the way of his chess. Asked about whether China could follow up their Olympiad victory by providing an individual Men’s World Champion, perhaps himself, he played down the prospect:

We still have a distance between us and the top elite chess players in the world. We can only strive for the goal for now.

His next tournament is likely to be in Gibraltar, while he responded to the question of whether he’d come back next year as follows:

I need to work on my studies, including my English!

You can read more about Yu Yangyi’s career in his chess24 profile. 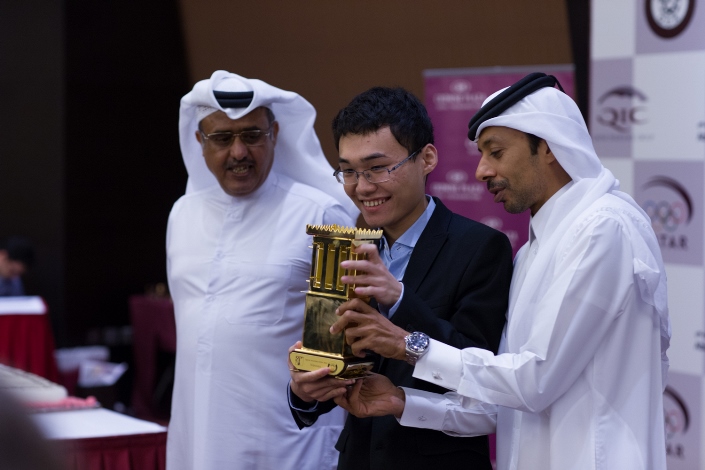 Congratulations poured in for the new champion, although his two letter first name represented some difficulties

So it was a bitter end for Kramnik, but he could still look back on a much more successful tournament that you could have predicted after his draws in the first two rounds. At least no-one can cut a cake quite like he can! 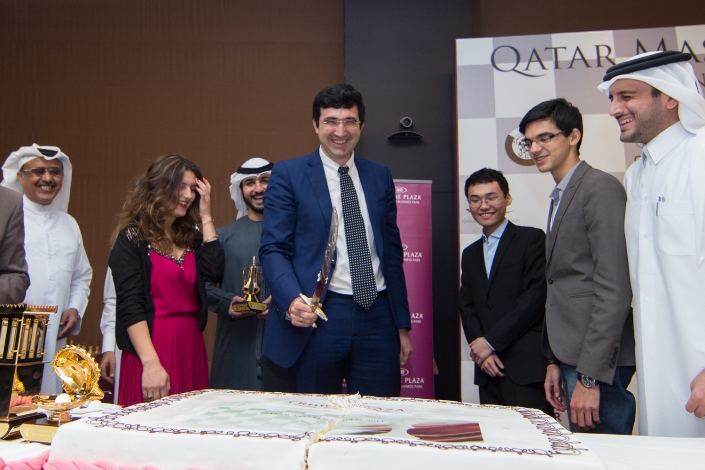 This is the moment after the cake was cut - we're not sure what happened next... | photo: Maria Emelianova, Qatar Masters

Anish Giri, meanwhile, heads to London on the back of an entertaining win, again described by Jan Gustafsson: 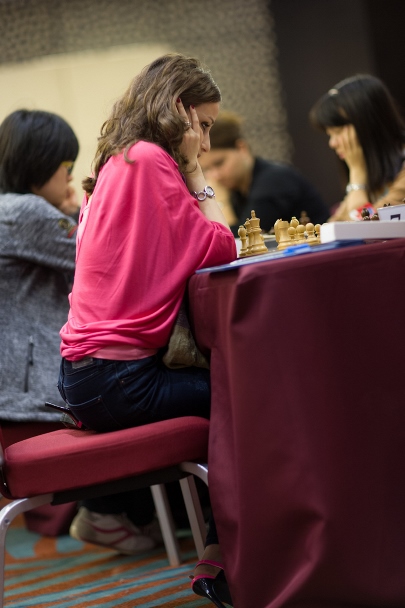 It was a good day for Team Giri, since his girlfriend Sopiko Guramishvili also recorded her first win of the event! | photo: Maria Emelianova, Qatar Masters

Amid a sea of draws Zahar Efimenko holding a difficult ending against Maxime Vachier-Lagrave stood out, and he was joined in the tie for fourth place by last-round winners Sanan Sjugirov and Vasif Durarbayli. Half a point back were no less than 18 grandmasters, including some big names:

Baskaran Adhiban's 24th place may seem modest, but just look what it did to his rating!

Ok, sadly it seems this may have been a brief anomaly. 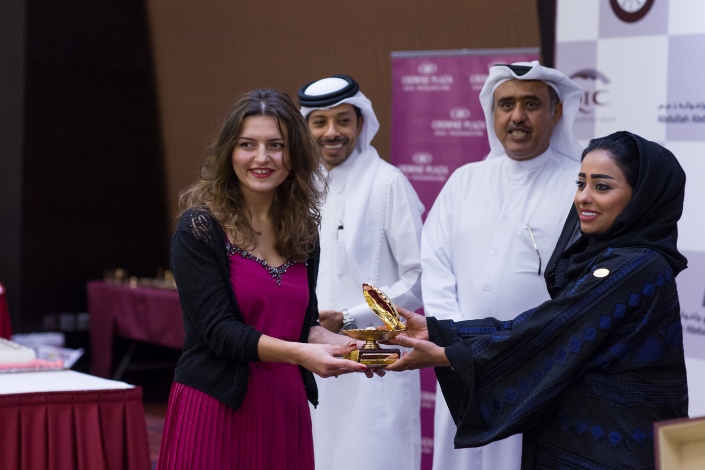 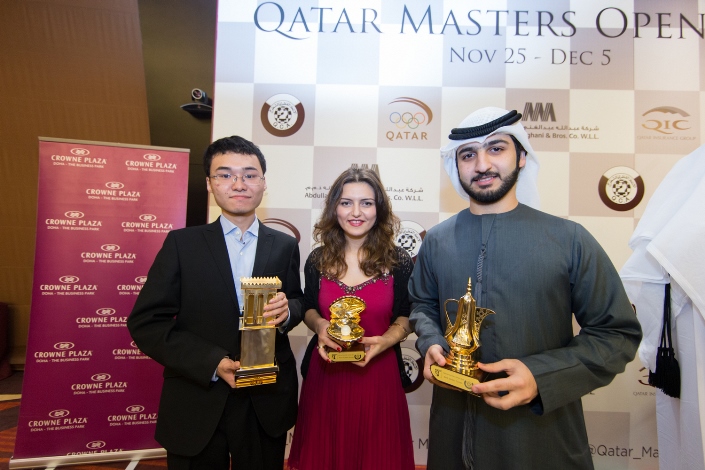 Here the winners are joined by Saleh Salem (6/9), the top Arab participant, who lost only that single game to Vladimir Kramnik in the penultimate round. He also managed a draw with Black against the man of the moment, Yu Yangyi | photo: Maria Emelianova, Qatar Masters

So that’s all from the inaugural Qatar Masters Open, which certainly whetted our appetite for more. The word on the street is that the organisers are planning to attract even more of the world’s very best players next year. It should be good! 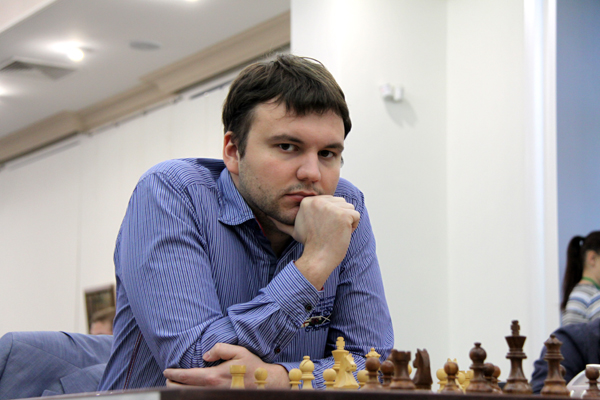 Igor Lysyj, now up to 2704.9 on the live ratings, has a one-point lead with three rounds to go | photo: Eteri Kublashvili, Russian Chess Federation

Igor "the Bald" Lysyj has increased his lead at the Men’s Russian Championship to a full point after ruthlessly exploiting a mistake by Denis Khismatullin in Round 6. Pre-tournament favourite Sergey Karjakin is no longer in last place alone after being roused from his slumber by Vadim Zvjaginsev, who not only played the Pirc Defence but followed it up by “unleashing” the novelty 13…Bh8. The position was so bad that the computer evaluation never changed much as the lethal blows fell. A snapshot: 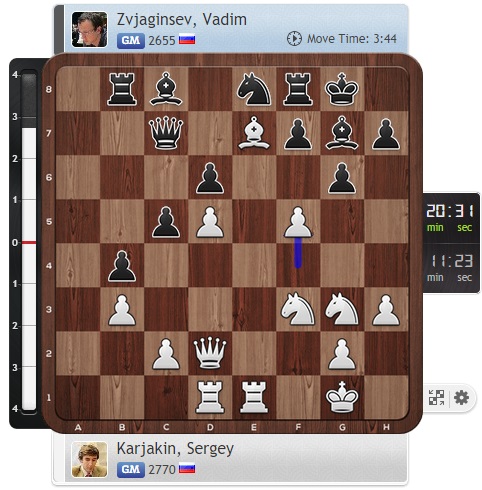 So Karjakin is back on -1, with Peter Svidler and half the field, a full two points behind Igor Lysyj on 4.5/6.


In the women’s event we had the first draw in three rounds, and it was vital. 16-year-old Aleksandra Goryachkina retained the lead after holding on a pawn down against Natalia Pogonina. The other four games were, inevitably, decisive. Alisa Galliamova joined Goryachkina in the lead on 4.5/6 by defeating ex-World Champion Alexandra Kosteniuk. Defending Champion Valentina Gunina, meanwhile, is only half a point off the lead, after winning her last four games to make her two opening defeats a distant memory.

There are three more rounds to go in the Russian Championships, and you can watch all the games live here on chess24 from 13:00 CET each day: Russian men | Russian women

You can also see every game in our free mobile apps: