Igor Lysyj and Valentina Gunina have won the 2014 Russian Championships in Kazan. The highlight of Sunday’s finale was a truly wild clash between co-leaders Alisa Galliamova and Valentina Gunina, which could have gone either way. In the men’s event Ian Nepomniachtchi and Dmitry Jakovenko needed to win to force a play-off, but neither could stop Lysyj claiming the Russian Championship on his first attempt. 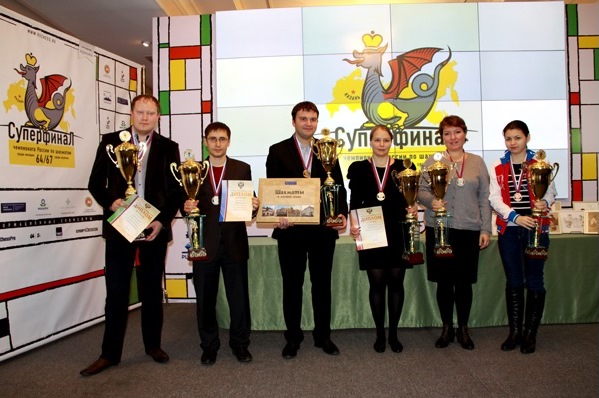 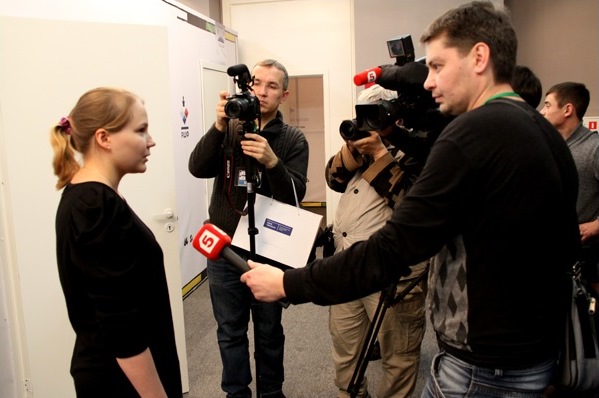 After two rounds of the Women’s Russian Championship Superfinal in Kazan, Valentina Gunina was on 0/2 and you would have given long odds on her defending the title she won in 2013. After that, though, she never looked back, and a winning streak of six games in a row set her up for a last-round battle against hugely experienced local hero Alisa Galliamova. In the event of a draw the players would face a rapid play-off on the same day, but they made sure that wasn’t required (replay the game with computer analysis here). 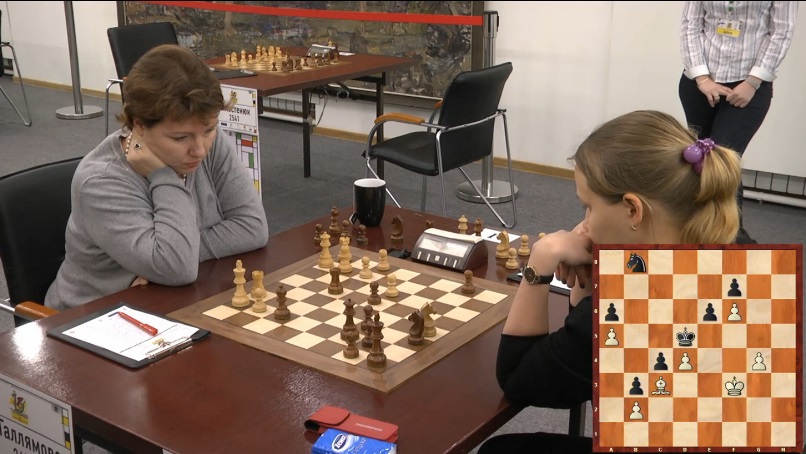 It all came down to this... Alisa Galliamova vs. Valentina Gunina | image: live broadcast

Gunina played Black and went for a somewhat dubious pawn sacrifice with 12…f6, since, as she said after the game, she didn’t want to give her opponent the quiet positional game in which she’d feel most at home. That calculated gamble resulted in her opponent spending a lot of time on her following moves, which would eventually prove crucial, but first Valentina would have to endure what seemed to be a knockout blow - 32.Nd6:

Gunina admitted she’d completely missed this simple fork, which seemed to have won Alisa the Russian Championship. Only two moves later, though, Galliamova took the fateful decision to play 34.Qb1? for the second time in the game:

Gunina almost instantly seized her chance with 34.Bxh2! The problem now is that White can’t take the bishop due to Qg3+ then Rd2 and mate to follow. Either 34.Qe1 or 34.Qe2 would have eliminated that threat. 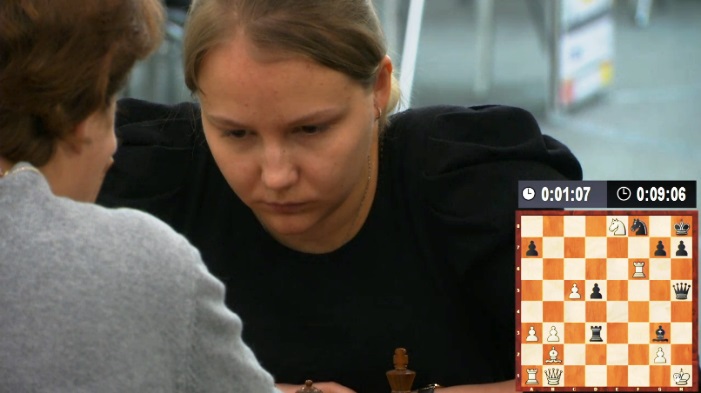 Although exhausted after a week of tough games Gunina wasn't going to let her opportunity slip! | image: live broadcast

Alisa was now worse and simply looked lost, but objectively she had excellent chances of survival... if she could find a vital trick:

Here she played 39.Nxf6 and after 39…Qh6+ the position was lost. Instead 39.Bxf6+! seems to hold, with the saving idea of 39…Kg8 40.Bg5!! The clock was ticking, though, and Alisa could spare no longer than the 26 seconds she took for this championship-changing decision.

So ultimately Gunina had escaped the curse of Caruana and managed to replicate the seven wins in a row of Fabiano in St. Louis (if against slightly less exalted opposition…). Elsewhere the round lived up to the 20% draw ratio of the whole women’s event, with only Aleksandra Goryachkina drawing against Ekaterina Kovalevskaya – a game that was enough to give her third place. 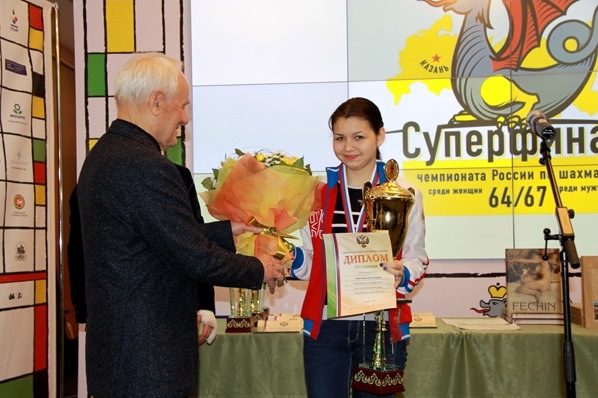 Olga Girya had pushed too hard for a win that would have given her a play-off place if the leaders drew and lost to Anastasia Bodnaruk, while there were also losses for Alexandra Kosteniuk (who gave Oksana Gritsayeva her first win of the event) and Natalia Pogonina. That was Natalia’s fifth loss of an event she’ll want to forget in a hurry.

The final table is as follows:

All that’s perhaps left to add is that Gunina’s win took her above Kateryna Lagno and Alexandra Kosteniuk on the live rating list so she’s now not only the Russian Champion (for the third time) but also the no. 1 rated Russian player.

Igor the Bald hangs on 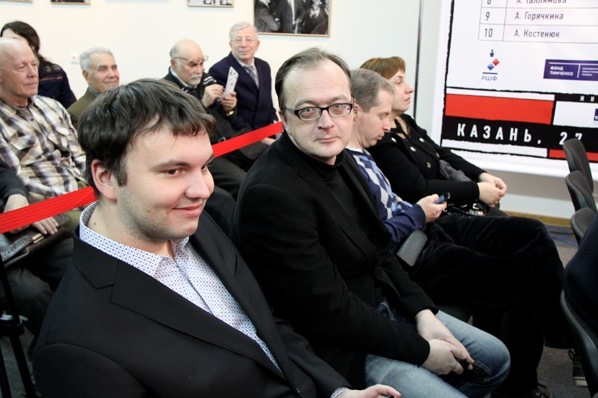 After his triumph Igor Lysyj made a point of publicly thanking his long-term coach and second IM Nikolay Ogloblin, here on his left | photo: Eteri Kublashvili, Russian Chess Federation

There’s no question that Igor Lysyj, who we introduced in an earlier report, was the deserved winner of the 2014 Russian Championship. In an event often lacking in action he contributed six decisive games, with his four wins including the 2700+ scalps of Karjakin, Morozevich and Jakovenko. Not bad for the 27-year-old’s first ever Russian Championship. No-one else managed more than two wins.

Igor went into the final round with a half-point lead and unashamedly played for a draw with the black pieces against Boris Grachev, who had drawn seven and lost one of his previous games. Lysyj entered a queen ending that he’d assumed in his preparation would be an easy draw, and although it didn’t quite go as well as planned, he did achieve the desired result. 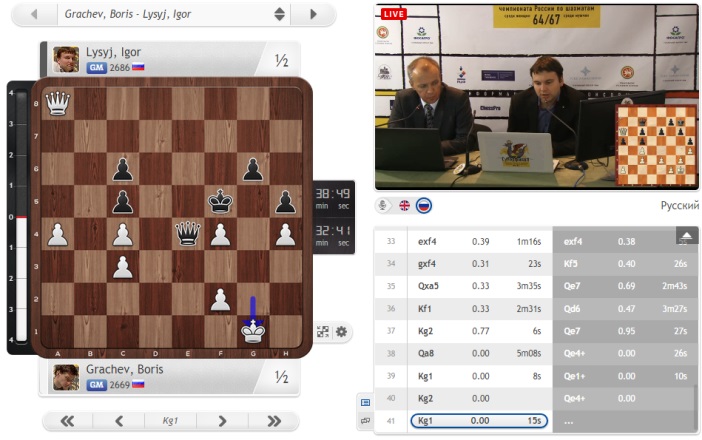 There were a few awkward moments, as Igor Lysyj explained in his post-game interview with Sergey Shipov, but Igor had done enough for what he described as "undoubtedly the best result of my career" | image: live broadcast

That left a gap open for Ian Nepomniachtchi or Dmitry Jakovenko to force a play-off with a win, but last-round nerves got the better of them. 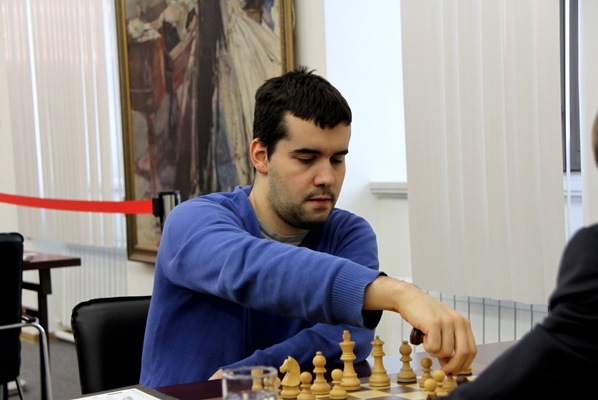 It seems the chess work Ian Nepomniachtchi did in Sochi was of more benefit to a certain Magnus Carlsen! | photo: Eteri Kublashvili, Russian Chess Federation

Nepomniachtchi went down in flames. His 25.f5 already smacked of desperation and Nikita Vitiugov responded with the deadly counter-break 25…d3! (replay the whole game here):

Nepomniachtchi was distinctly unimpressed with his own play:

Jakovenko at least managed to gain winning chances, but despite time trouble Denis Khismatullin was able to force a draw by perpetual check.

The all-star trio of Karjakin, Morozevich and Svidler weren’t within touching distance of first place before the final round, but at least 7-time Russian Champion Peter Svidler managed to end on a high note by beating Vadim Zvjaginsev. 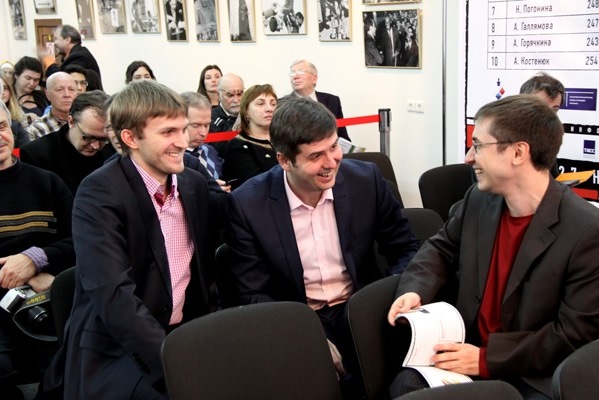 It was a very curious game. First Svidler thought for 9 minutes after the not-unprecedented opening moves 1.e4 c5 2.Nf3 Nc6… then on move 9 he spent 13 minutes on 9.f3, only to follow it up with 10.f4 next move, after another 10 minutes of thought!

Peter himself struggled to explain what had possessed him to do such a thing afterwards (perhaps he had fond memories of the 1.f4 he played in an earlier game!). Sure enough, Vadim achieved instant equality with 10…d6, but then he went on to do something equally inexplicable on move 14:

Peter took the pawn on b5 and eventually converted his advantage, if not without some adventures along the way (replay the game here).

So a final table few could have predicted before the event looked as follows: 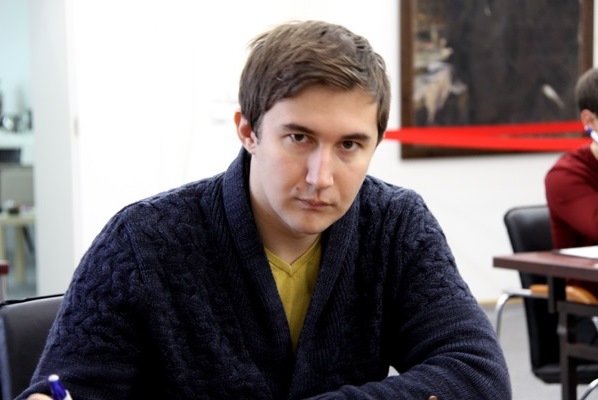 Karjakin dropped below Kramnik and indeed out of the Top 10 on the live rating list, while Grischuk’s decision to skip the event left him over 50 points ahead of Karjakin on 2810. Igor Lysyj, meanwhile, will be rated 2700 on 1 January 2015 – his current live rating is 2699.7 – unless he commits the error of playing any chess in the meantime!

Next year's Russian Championships will have 12 players each. The federation must be hoping more of the top players will participate - and star - in the event!