The Chinese women’s team are on course to win the World Team Championship for the first time since 2011 after defeating Russia 2.5:1.5 in the clash of the leaders in Round 5. In the open section, however, China still trail leaders Russia by a whopping 4 points, with England the only team to have held Russia to a draw so far. England and India are in joint second place, two points back, with both teams unbeaten and Adhiban celebrating crossing the 2700 mark for the first time in his career. 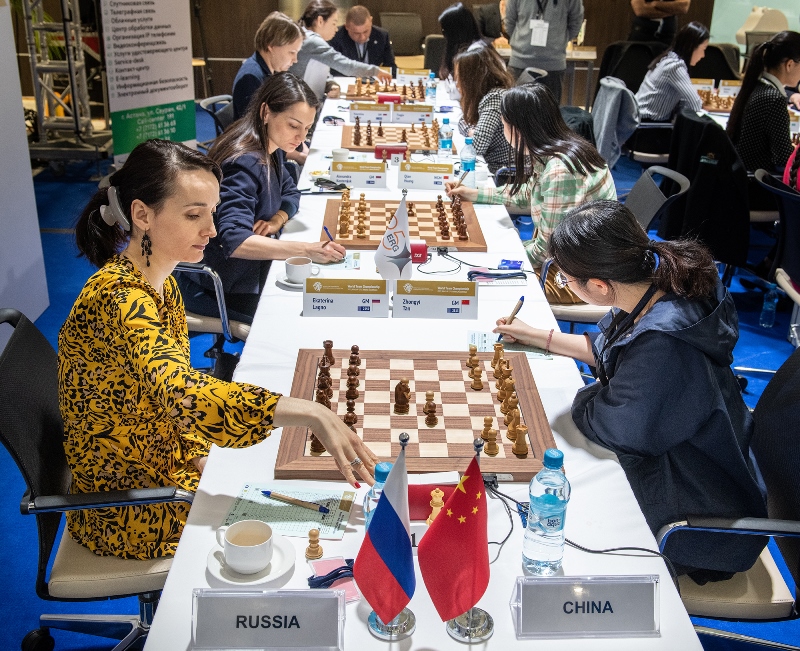 Round 4: Russia and China held 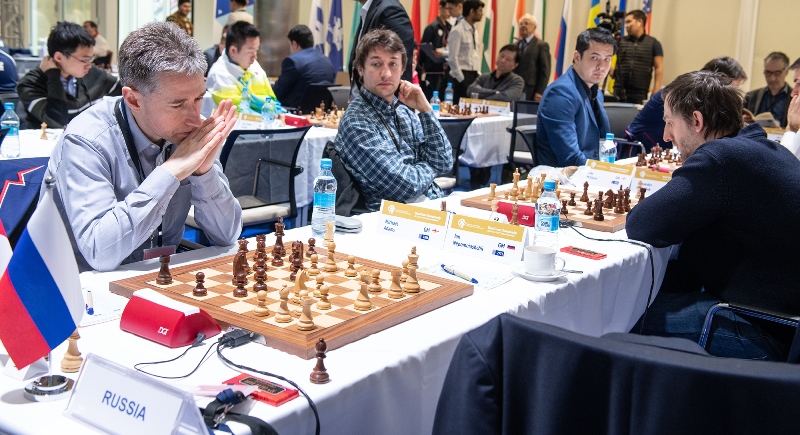 Russia and England drew all four games in their Round 4 match, with Mickey Adams taking a draw against Ian Nepomniachtchi in a position where the computer felt he was significantly better. The overall outcome was a fair reflection on the play, however, since Alexander Grischuk probably had a bigger advantage than Luke McShane thought until their game fizzled out in mutual time trouble:

That was a chance for China to recover some ground on Russia, but instead, after two losses in a row, they managed only a draw against India, with Yu Yangyi losing a second game in a row, this time to Ganguly. 23.hxg4? was the last straw:

Bu Xiangzhi rescued a match draw with a win over Aravindh on Board 4, while Adhiban’s draw against Ding Liren (after beating Grandelius, Maghsoodloo and Amin) was a landmark moment in the 26-year-old grandmaster’s career:

Adhiban is the fifth Indian player after Anand, Harikrishna, Vidit and Sasikiran to have crossed 2700. He talked about his draw against the world no. 3:

There was plenty of entertainment elsewhere in Round 4, with Sweden scoring three wins in a 3:1 win over Azerbaijan after not having won a game in their first three matches. Nils Grandelius explained that their late invitation to play (they were the 5th team on a 4-team FIDE reserve list!) left no time to prepare, and their plan had been to “try to survive in the beginning and then we will warm up”. Survival hadn’t been going so well, but Nils managed to fashion a beautiful win from what had been a desperate position against Arkadij Naiditsch:

Naiditsch saw that and after 44.Kd4!! went for 44…f6 instead, but after 45.Kd5 he resigned as the mating threat had gone nowhere.

USA-Kazakhstan ended in a 2:2 draw after wins were traded on the last two boards, but all eyes were on the top board, and specifically on the f-file in Swiercz-Jumabayev!

In the women’s section the leaders remained perfect, though it wasn’t easy going. China beat Armenia with a single win on the bottom board, while Russia’s 3.5:0.5 victory over India could have been much tighter. On top board Kateryna Lagno was in some trouble against Karavade, until 38…Rc2? suddenly turned the tables:

Those wins set up the clash of the leaders perfectly.

When the Chinese women last won the World Team Championship in 2011 they had Hou Yifan and Ju Wenjun on the top two boards. This time round both are missing – Hou Yifan is studying at Oxford University while Ju Wenjun plays in the Prague Challengers – but that didn’t stop China dominating a match that was as tense as expected:

For 12 moves Tan Zhongyi-Lagno followed the extremely sharp game Wojtaszek-Laznicka from Round 1 of the Chess Bundesliga in 2017. It was notable there that Wojtaszek played 12.Rc1 after a 45-minute think, while Tan Zhongyi spent under two minutes on it:

Laznicka took 20 minutes to respond 12…a6, while in Astana Lagno also needed only a couple of minutes to respond with the novelty 12…e5!? (a curiosity is that Laznicka later spent over 40 minutes on 17…e5!? before that earlier game was drawn by perpetual check in 31 moves). That pawn break looked risky as the Chinese former World Champion went on to build up a powerful attack on the queenside. If long queen retreats are some of the hardest moves to see in chess Tan Zhongyi’s 29th move deserves praise!

Lei Tingjie won with a similarly blockbuster attack on board 3 against Valentina Gunina, while on board 2 Alexandra Kosteniuk had to fight for a draw against Huang Qian. Long after the other games and the match were over Aleksandra Goryachkina scored a consolation win over Ding Yixin, China’s hero in the previous round. 20-year-old Goryachkina has scored 5/5 in Astana and with a live rating of 2517.5 has entered the women’s top 10: 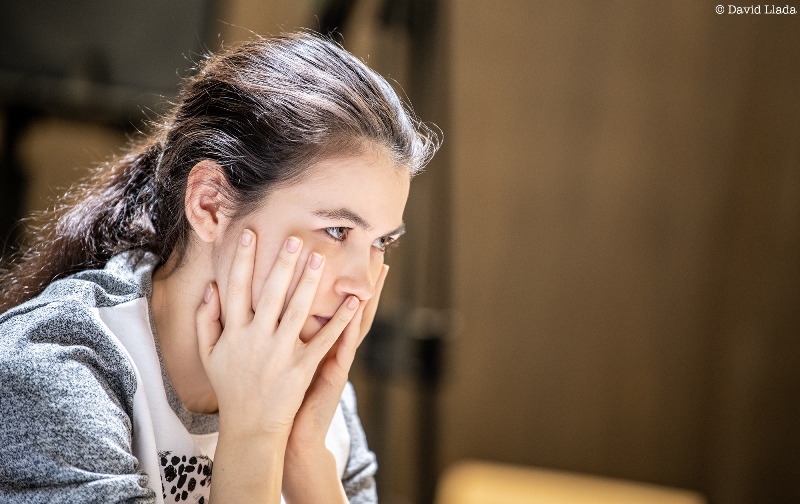 China are therefore still on a perfect 10/10 points in the women’s section:

There was better news for Russia in the open section, where they beat Kazakhstan 3:1 and therefore increased their lead over India and England, who drew against each other, to 2 points, while the USA are now 3 points back after losing to Azerbaijan. The Azeris first win in Astana came via wins for Naiditsch over Swiercz and Abasov over Lenderman. 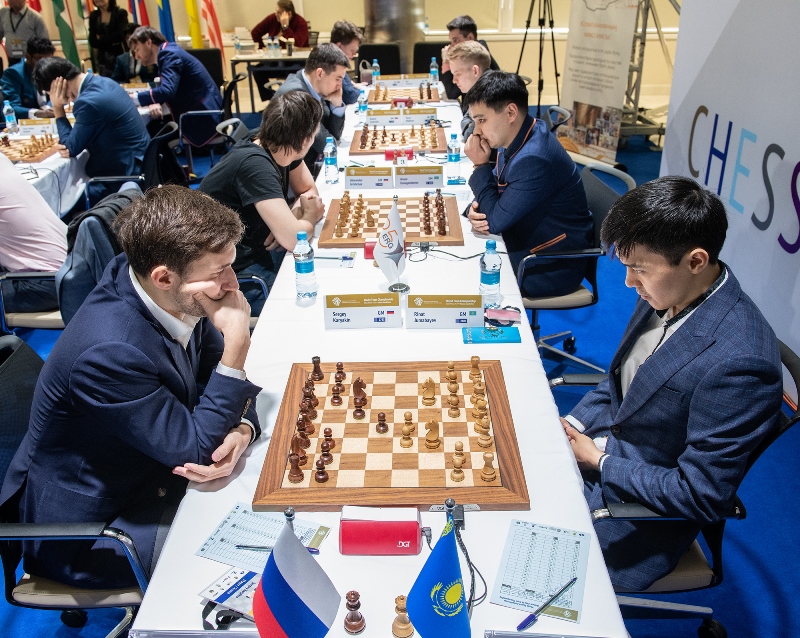 Rinat Jumabayev followed up his win over Mickey Adams with another big scalp, but his teammates all lost to Russia | photo: David Llada, official website

All that spoiled a perfect day for the Russian men’s team was that wins for Grischuk, Andreikin and Artemiev were offset by a top-board loss for Sergey Karjakin. The famed defender slipped by grabbing a pawn on b4 with 61…Rxb4?

Rinat Jumabayev pounced with 62.Ra7!, and since the black rook had left the back rank it can no longer go to c1 to block mate with Rc8. Karjakin instead had to give up his bishop with 62…Bd7 63.Rxd7+. Of course R+B vs. R is often a theoretical draw, but not in this case, as Jumabayev smoothly went on to prove. The 29-year-old local hero afterwards showed his game with Swiss GM and FIDE Press Officer Yannick Pelletier:

China matched Russia by narrowly defeating Iran, but that still leaves them 4 points off the pace. Sweden meanwhile picked up a second win in a row, this time over Egypt, though Bassem Amin defeated Nils Grandelius in a match-up between two players who have both now lost 3 games in Astana.

On Sunday the players enjoyed their one rest day in Astana:

The final four rounds start on Monday and you can watch all the action here on chess24 from 10:00 CET, with Evgeny Miroshnichenko and Anna Burtasova commentating in English while Sergey Shipov commentates in Russian: Open | Women