China’s chances of winning a third chess World Team Championship in a row look bleak after a shock defeat to the USA in Round 2 was followed by losing to co-favourites Russia in Round 3. Each match was decided by a single game, with Alex Lenderman beating Ni Hua and Ian Nepomniachtchi taking down Yu Yangyi. The Russian teams still have a perfect 100% record, enough for the sole lead a point ahead of India, USA and England in the open section and the joint lead with China in the women’s section. 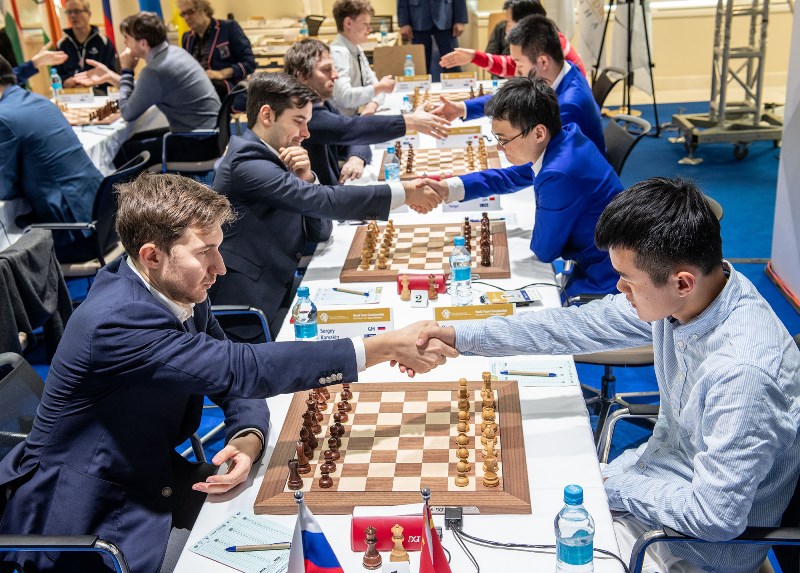 After no surprises in Round 1 of the open section in Astana we immediately got a sensation in Round 2, as what was arguably a second or third-best US team defeated the might of China (you can use the selector below to view all the rounds of the World Team Championship):

The hero was Aleksandr Lenderman, who had been defending a tough position against Ni Hua until he was given the chance for a surprising counterattack:

Ni Hua bit the bullet with 32.Nxg5, but ultimately Lenderman went on to convert his extra piece into a win in 62 moves.

Aleksandr was as modest as usual when describing his achievement:

Saving the match was still within China’s grasp, but Wei Yi missed his moment against Alexander Onischuk:

56...e2! 57.Kg7 h5! and Black is in time to force White to give up the rook for the e-pawn, pick up White’s pawns and ultimately queen the h-pawn. In the game after 56…g5? 57.Kg7 h5 58.Kg6 e2 the same plan fails as the white king is too close. That escape was perhaps no less than the US deserved, since Dariusz Swiercz and Sam Sevian had both had chances on the other two boards. 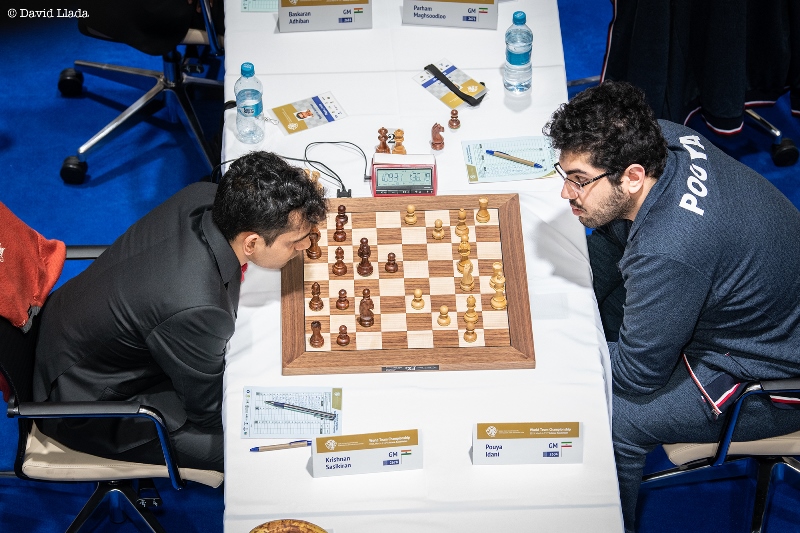 Elsewhere Russia beat Egypt 3:1, India and Iran played out a 2:2 draw and England followed the same trusty formula as in Round 1 – first Mickey Adams lost quickly on top board, this time to Arkadij Naiditsch of Azerbaijan, before England nevertheless went on to claim victory after wins on two of the lower boards. This time Luke McShane defeated Rauf Mamedov and Gawain Jones overcame Eltaj Safarli. 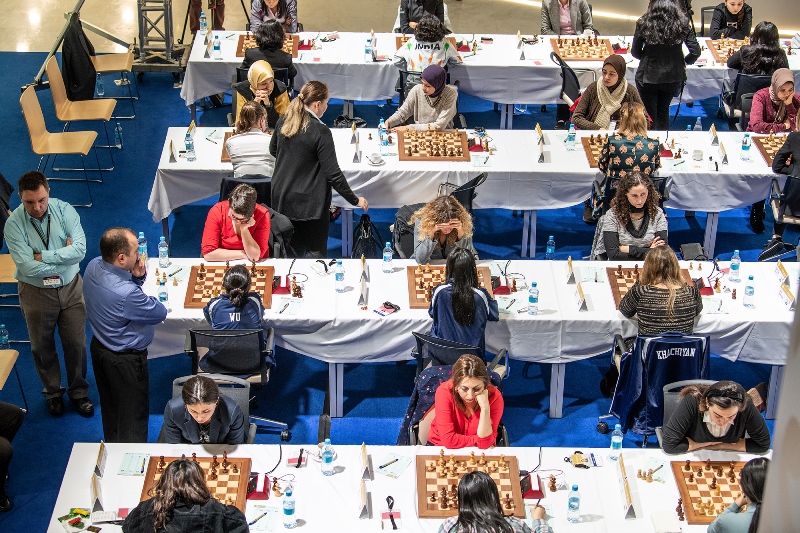 The day got even better for the American team as their women overcame Hungary despite being outrated on every board. The wins came for Rochelle Wu and Carissa Yip, with the latter picking up her second upset win in a row after turning round what had been a dead-lost middlegame position against Ticia Gara. 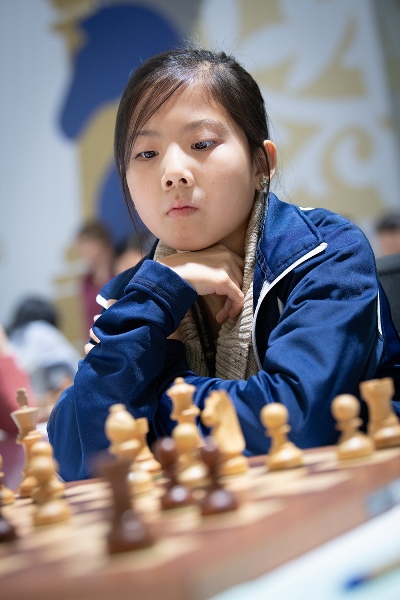 Rochelle Wu was only born in 2006 but started the World Team Championship with 1.5/2 | photo: David Llada, official website

In the key women’s matches of Round 2 Russia defeated Armenia 3.5:0.5 but China kept pace with a 2.5:1.5 victory over 2017 bronze medallists Georgia thanks to a win for Tan Zhongyi over Bela Khotenashvili on the top board. 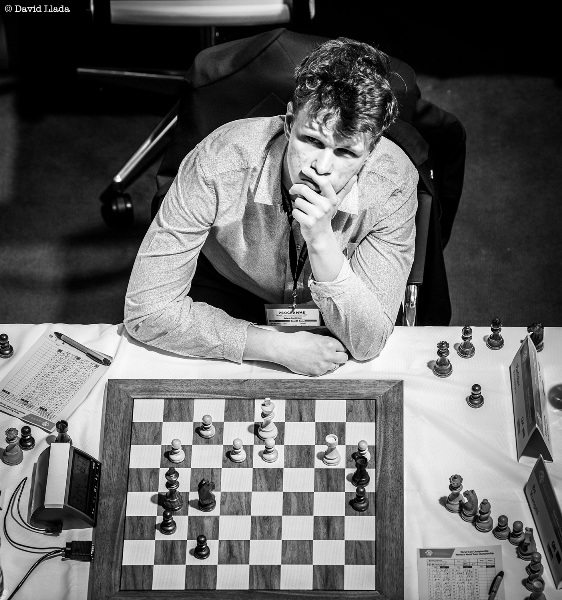 Vladislav Artemiev had to work very hard to save a draw and ensure a vital team win for Russia | photo: David Llada, official website

The loss to the USA made the match against co-favourites Russia even more important for China – to undo the damage of the last round they needed a win, while it was vital that they at least didn’t lose. That’s easy to say, but almost before the round had really got going Ian Nepomniachtchi had Yu Yangyi exactly where he wanted him. He said afterwards that he’d prepared the whole Petroff line with 17.c4! with Alexander Motylev before the game, while Yu Yangyi had already spent an hour up to that point. Nepo identified 19…Qe7? as a critical mistake and after 22.Be3! felt he was essentially playing with an extra queen:

22…Qa5 23.Bf4! completed the shutout of the black queen, and although the game ended on move 44 it had lasted a mere three hours, with Ian up on the clock from where he began:

Elsewhere there were chances for Ding Liren and Bu Xiangzhi to rescue the match, but in the end the other games were drawn. Jan Gustafsson takes a look at all the games:

That leaves China on a mere 2 match points after 3 rounds, while Russia are 4 points ahead on 6/6. They now have the sole lead, since England and the USA dropped their first points of the event in a 2:2 draw (all games were drawn, though the failure of the live broadcast for that match maintained the suspence). 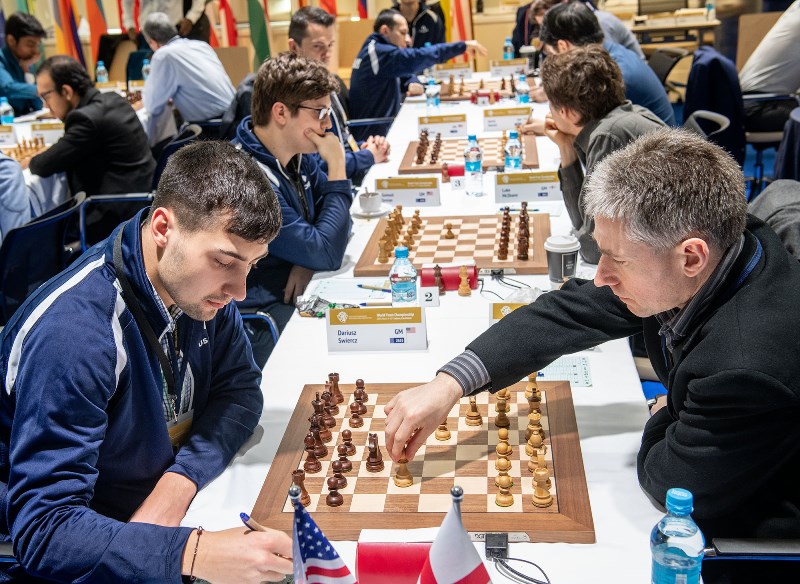 India are the other team just a point behind Russia after beating Egypt, with Adhiban the star so far with a perfect 3/3!

As you can see, India take on China in Round 4, while Russia play England and USA face Kazakhstan. 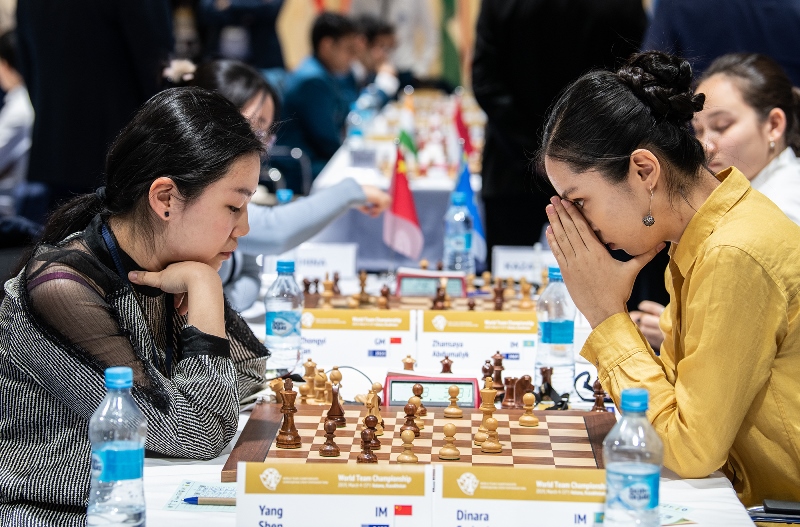 In the women’s section the results went with rating in Round 3, though China only beat Kazakhstan 2.5:1.5 after Shen Yang lost to Dinara Saduakassova on board 2. They came through with wins for Ding Yixin and, in the perhaps the most memorable game of the round, Lei Tingjie. 15-year-old Bibisara Assaubayeva was already in trouble, but 17…Bf5? all but forced her opponent to play a move we’d all love to play!

There are still six rounds of the World Team Championship to go, and there's sure to be more drama!

Tune into all the action live here on chess24 from 10:00 CET, with Evgeny Miroshnichenko and Anna Burtasova commentating in English while Sergey Shipov commentates in Russian: Open | Women