Tan Zhongyi sprung the first surprise of the Women’s World Championship match in Shanghai by playing the Queen’s Gambit Accepted on move 2 for the first time in her career. That soon gave her a big advantage on the clock over Ju Wenjun, but the women’s no. 2 fought back to get chances of her own before a draw was agreed on move 63. We take a look at all you need to know about the match currently taking place in China. 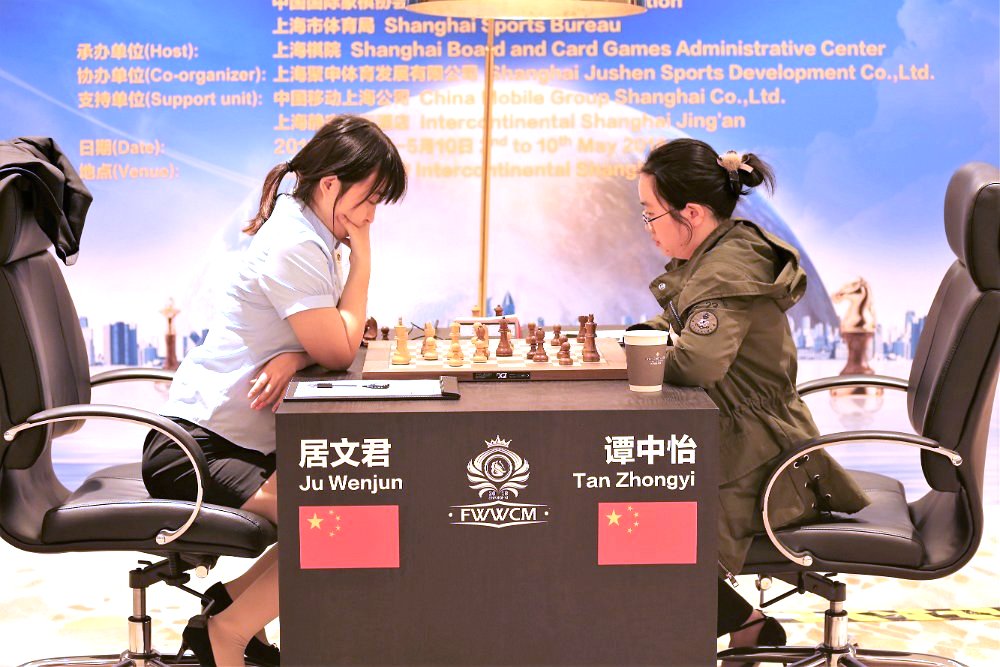 You would be forgiven for not having realised a World Championship match was about to take place, since the pre-publicity for the chess world’s showcase women’s event amounted to almost nothing -  even an official website appeared only on the day of yesterday’s opening ceremony. That was disappointing, but not uncommon for events held in China, where top notch organisation and treatment of the players is often accompanied by haphazard broadcasts.

Let’s take a look at what we can expect:

Who are the players?

The match will be fought between women’s no. 2 Ju Wenjun (2571) and no. 10 Tan Zhongyi (2522), two Chinese grandmasters (they both hold the full title) who were born in 1991. Ju Wenjun is 4 months older (aged 27 to Tan Zhongyi’s 26) and achieved more sooner, including becoming only the 5th female player after Judit Polgar, Hou Yifan, Humpy Koneru and Anna Muzychuk to cross the 2600 barrier. Tan Zhongyi has recently made up for lost time...

How did they qualify? 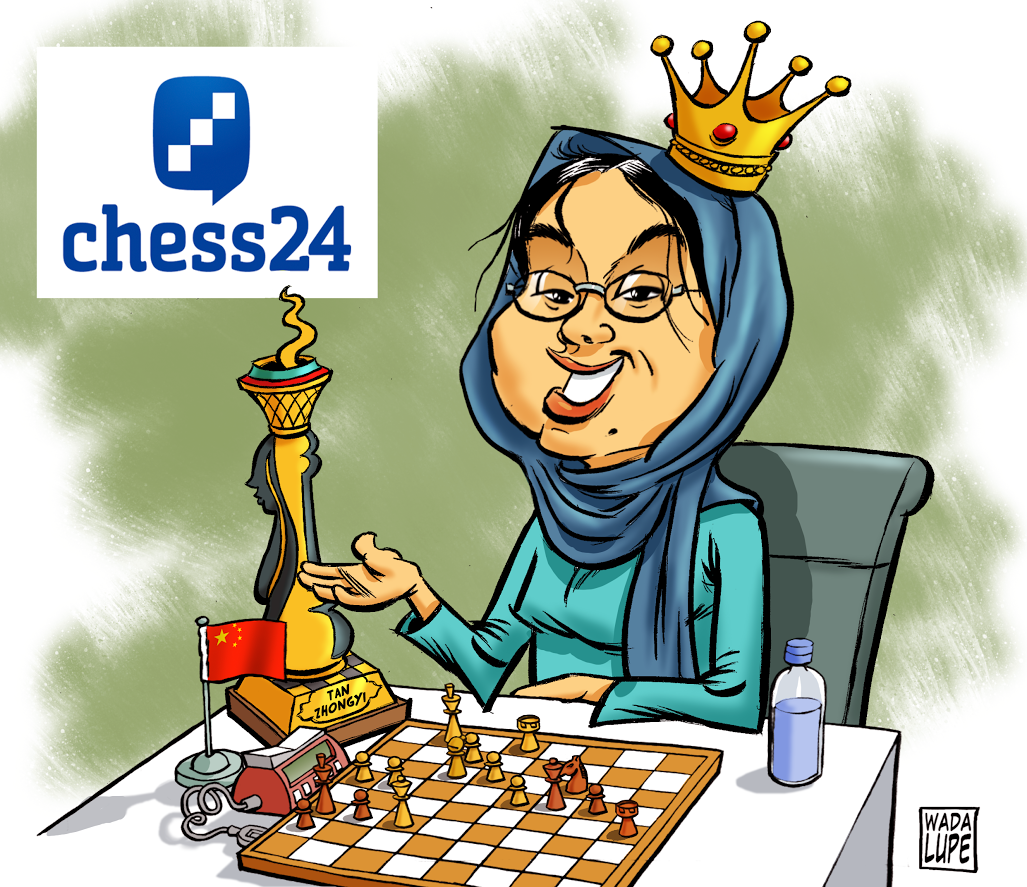 Tan Zhongyi has been the Women’s World Champion since March 2017, when she won the knockout tournament in Tehran, Iran. She did it the hard way, needing to fight back from losses again and again in her matches, and beating the top seed, none other than Ju Wenjun. In the final she faced the world no. 3, Anna Muzychuk. After exchanging wins in the four classical games Tan Zhongyi won the second rapid playoff game to take the title.

Ju Wenjun qualified for the match back in December 2016 when she won the 2015-2016 Women’s FIDE Grand Prix series with victory in the final Grand Prix in Khanty-Mansiysk. It was clear at the closing ceremony how much it meant to her!

More importantly, the winner will be the Women’s World Champion, though possibly only for six months. The next Women’s World Championship knockout is scheduled for 1-25 November this year in Khanty-Mansiysk, Russia, and unless the regulations change the reigning champion will have no privileges except for not needing to qualify for the 64-player event.

The women’s no. 1 Hou Yifan withdrew from the Women’s World Championship cycle after winning the first event of the Grand Prix series ultimately won by Ju Wenjun. She was unhappy with the way the women’s system differs from the overall Chess World Championship, where Magnus Carlsen can only lose his title in a match. She also didn’t play in the knockout tournament in Tehran, and therefore didn’t qualify for the match. From this October her focus will be switching, at least partly, to studying at Oxford University:

As for Hou Yifan-Mariya Muzychuk in Lviv in 2016, the match will be played over 10 classical games, with the winner the first player to reach 5.5. The first five rounds will be held in Ju Wenjun’s birthplace, the 24 million people metropolis of Shanghai, before switching 1500km west to Tan Zhongyi’s birthplace, Chongqing, which has a mere 8.5 million or so in its central urban area (but over 30 million in the municipality as a whole!). 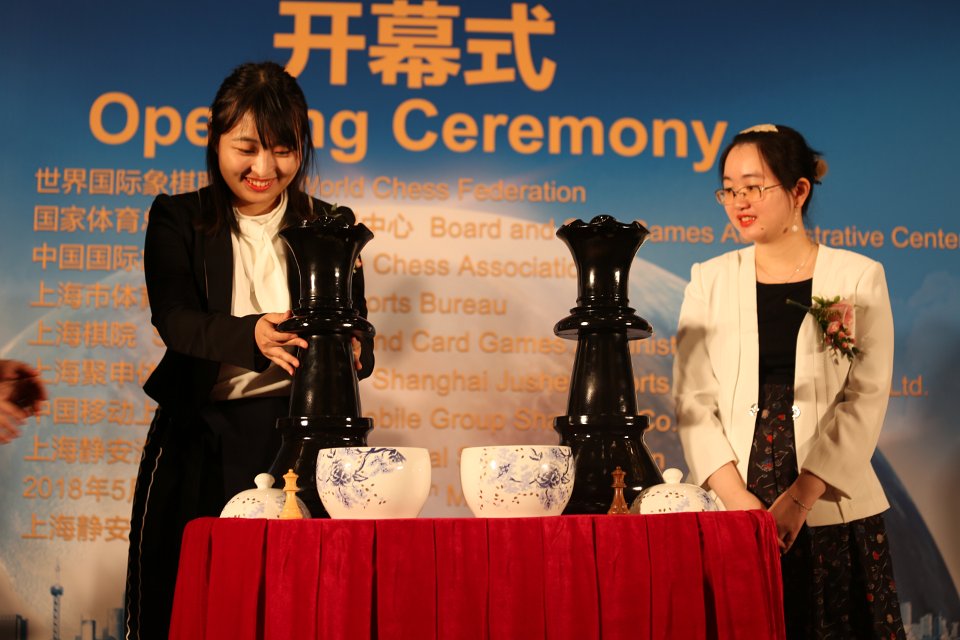 Ju Wenjun picked out the queen with a white base at the opening ceremony, meaning she had White in Game 1 | photo: Gu Xiaobing, official website

It's hard to say. Ju Wenjun is 49 points higher-rated, but arguably under more pressure as she's playing for the title for the first time. Tan Zhongyi leads their individual encounters 3 wins to 2, with 11 draws. Both players have had a year to prepare for the match. 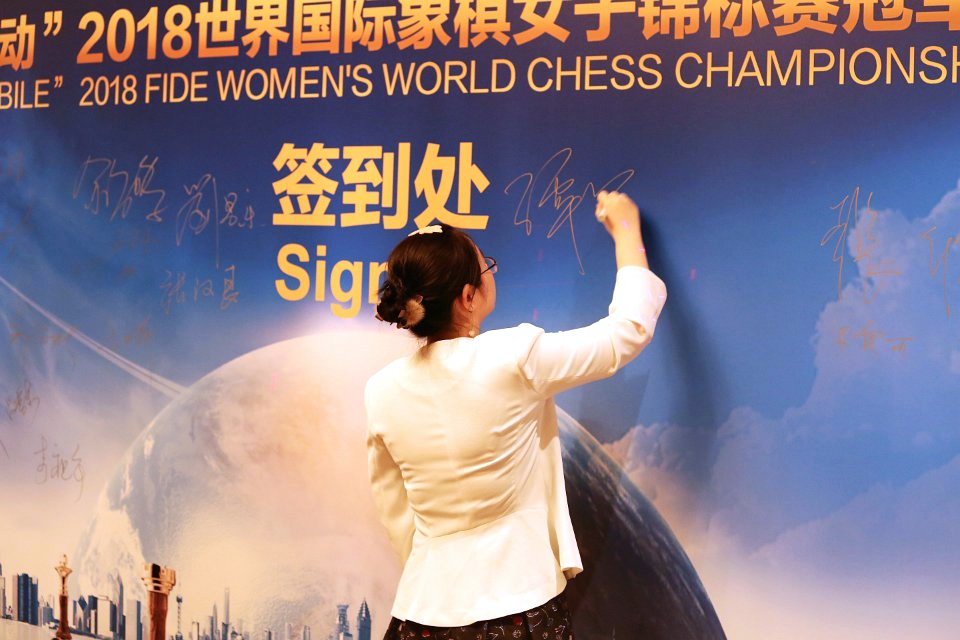 You can watch all the games here on chess24 from 09:30 CEST each day (a 30-minute anti-cheating delay has been implemented). There was live video and Chinese commentary available for Game 1, but it only worked on mobile phones. If we get a video link for future rounds we’ll embed that video. Currently we’re not expecting to provide our own English commentary, but that could potentially change depending on the course of the match.

How did the first game go?

The players are friends, and if not playing each other would be training together with the support of the Chinese Chess Federation. On this occasion they’re working separately, of course, and in a way that takes some of the pressure off. As Tan Zhongyi put it:

No matter who wins, China is always the winner. It therefore reduces the pressure to some extent and allows us to concentrate more on the match.

There’s always pressure at the start of a match, though, and the opening game saw some erratic time management. 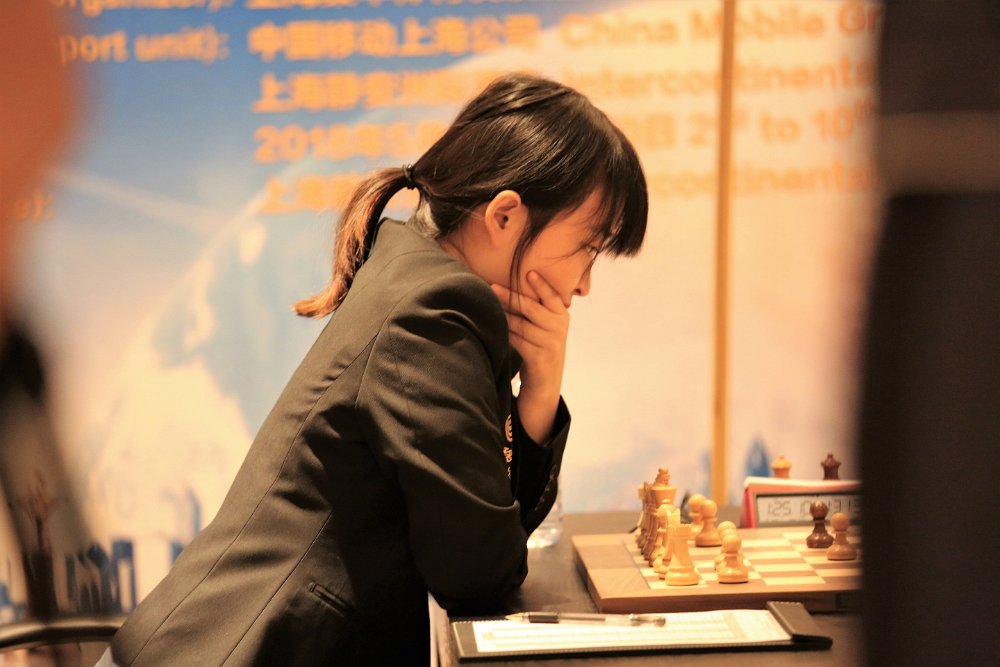 Tan Zhongyi seized the initiative at the start by meeting 1.d4 d5 2.c4 with 2…dxc4, the Queen’s Gambit Accepted, a surprise since in her previous 41 games she’d played 2…e6 40 times and 2…c6 once. Ju Wenjun went for the sharp 3.e4, as she had before, and her opponent was ready, with Tan Zhongyi not starting to think seriously until Ju had burned up almost an hour on the clock. Black had won the opening battle and had comfortable play after 13…Nbd7: 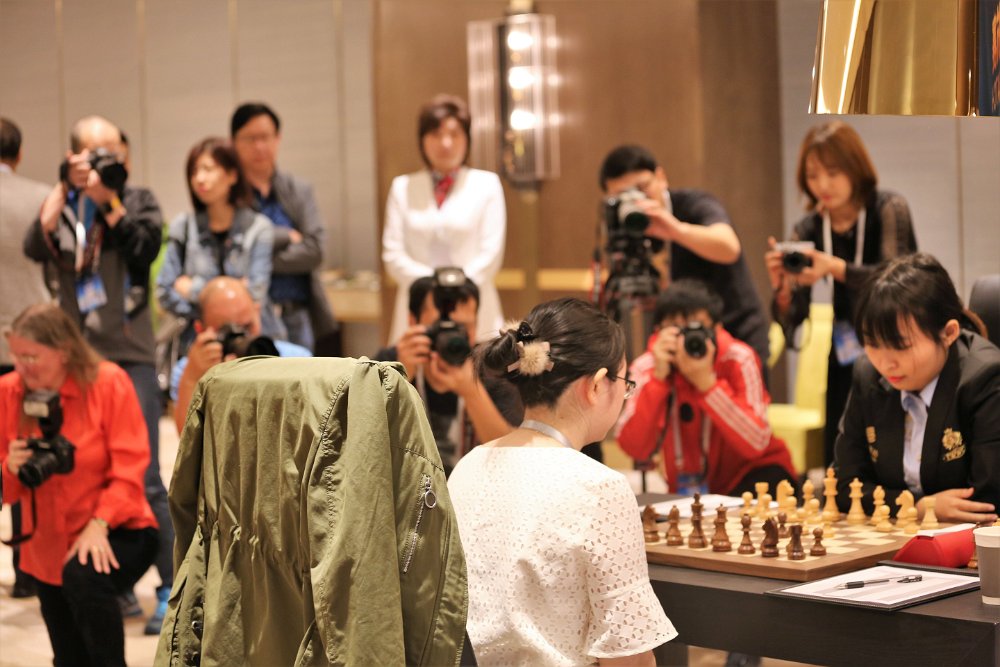 The media was out in force for the first game | photo: Gu Xiaobing, official website

Here Tan Zhongyi returned all of her advantage on the clock, spending 49 minutes before going for the self-pinning 18…Qe7!? Of course White is pinned as well, but after 19.Nfd2 Bf4 20.Qf3 Qe5 21.Re2 White was threatening to take over:

21…f5! was a well-timed break, though, and after 22.gxf5 (22.Nc3 might have been more interesting) mass exchanges followed. In the ensuing knight vs. bishop endgame Ju Wenjun had some advantage due to her more flexible knight and better king position, but it came to nothing and a draw was agreed after 5 hours and 61 moves.

Tan Zhongyi will have White in Friday’s Game 2, which you can catch here on chess24 from 09:30 CEST.