The 2017 FIDE Women’s World Championship was officially declared open in Tehran today, with top seed Ju Wenjun picking the white pieces in tomorrow’s first round. 63 players are competing in a 6-round, 20-day knockout that will determine a new Women’s World Champion. Hou Yifan chose not to play and will not be lying in wait for the winner this time, since she also withdrew from the 2015-6 Women’s Grand Prix won by Ju Wenjun. 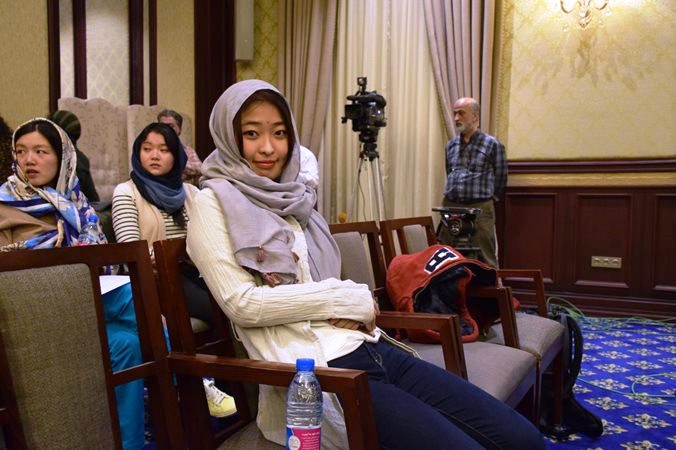 World no. 2 Ju Wenjun is favourite to become World Champion this March... and if she doesn't she should get another chance later this year! | photo: Reza Mahdipour, Twitter

The Women’s World Championship is taking place from 11 February to 3 March in the Espinas Palace Hotel on the northern edge of the Iranian capital of Tehran:

The format is the same 64-player knockout as for the events won by Anna Ushenina in 2012 and Mariya Muzychuk in 2015. There are five rounds with 2-game mini-matches followed by a 4-game final, with tiebreaks on the following day if required i.e.

There is only one full rest day on 26th February, before the final, though if players win their matches without the need for tiebreaks they’ll have a day to rest between rounds. The prize fund is $450,000, with the new World Champion picking up $60,000, the runner-up $30,000 and first-round losers also taking home $3,750. The new Women’s World Champion is expected to play a 10-game World Championship match against the FIDE Women’s Grand Prix winner Ju Wenjun, while if Ju Wenjun wins the knockout she’ll play Grand Prix runner-up Humpy Koneru.

You’ll be able to follow all the moves here on chess24, with our broadcast featuring the full pairings tree:

The absence of an opponent for Olga Girya is not a mistake. The Russian player was paired to play against Cristina-Adela Foisor, but the 5-time Romanian Women’s Chess Champion died on 22 January at the tragically early age of 49. She hasn’t been replaced in the pairings, so Girya will qualify for the 2nd round. Cristina’s daughter Sabina-Francesca Foisor is playing in Tehran and accepted a gift from the organisers:

The event features former World Champions Zhu Chen, Antoaneta Stefanova, Alexandra Kosteniuk and Anna Ushenina as well as a host of top female players, but the run-up to the tournament has not been without controversy.


Postponements and a boycott

The Women’s World Championship was originally supposed to take place in late 2016, but with no bidders a decision was taken at the 2016 Olympiad in Baku to hold the event in Tehran in 2017. On the one hand that was normal, since chess has been experiencing a boom in Iran, but for a women’s event it also meant a number of issues. Female players would be required to wear hijabs, while interaction with male coaches could also contravene local laws.

The dilemma that posed for players even split some families, with former Women’s World Champion Mariya Muzychuk commenting:

My sister, Anna, signed the contract. We talked about it, but for her becoming World Champion is a lifelong dream.

Argentinian no. 1 Carolina Lujan also turned down the chance to play in very similar terms, while American players faced the problem of travel to Iran also being discouraged by their government, even before Donald Trump’s attempted “Muslim ban” muddied the waters still further. Irina Krush dropped out, as did US Women’s Champion Nazi Paikidze, whose protest gained wide coverage in the mass media and saw almost 17,000 sign a protest to “Stop Women’s Oppression at the World Chess Championship by Challenging FIDE’s Decision”.

Iranian WGM Mitra Hejazipour, however, was among those who defended holding the event in Tehran:

This is going to be the biggest sporting event women in Iran have ever seen; we haven’t been able to host any world championship in other sporting fields for women in the past. It’s not right to call for a boycott. These games are important for women in Iran; it’s an opportunity for us to show our strength.

Ultimately the decision to hold the event in Tehran remained unchanged, and players were left to decide whether or not to take part.

Sopiko will be hoping to improve on her warm-up in Wijk aan Zee!

One person whose decision didn’t depend on the reflections above, however, was current World Champion Hou Yifan. The Chinese player has long complained about the “lottery” of the knockout system and campaigned to instead implement the same system as in men’s chess where the World Champion competes only in the final match. Hou Yifan has now completely withdrawn from the World Championship cycle, meaning the chances of the winner in Tehran holding on to the title for more than a year will be much greater.