Ju Wenjun and Aleksandra Goryachkina are tied 3:3 as the second half of the Women’s World Championship match now starts in Vladivostok, Russia. Goryachkina fell behind in Game 4 but hit straight back in Game 5 to score the first victory of her career over Ju Wenjun. The Chinese player then had to defend until move 105 in Game 6 and will be hoping for a shift of momentum in Russia. Meanwhile Chief Arbiter Shohreh Bayat has been at the centre of attention after a row over how she wore a headscarf has seen her decide not to return to Iran. 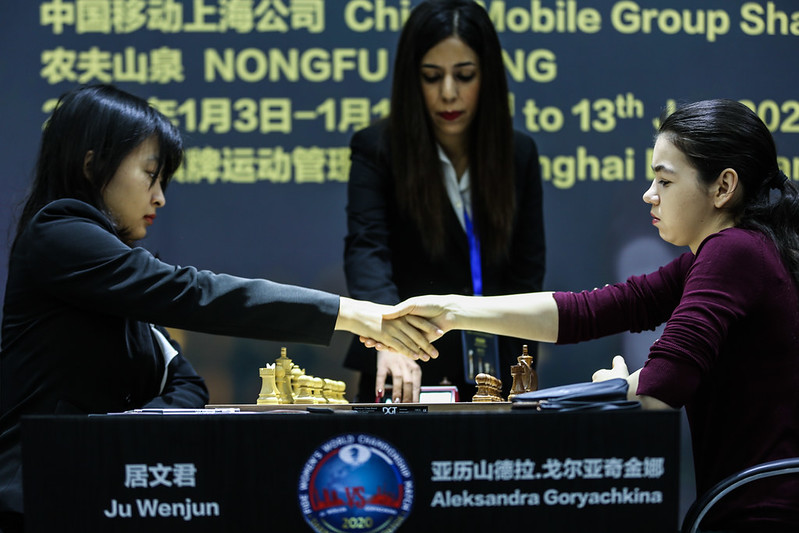 The story has not only been the closely matched battle between Ju Wenjun and Aleksandra Goryachkina but Chief Arbiter Shohreh Bayat taking the decision not to wear a headscarf after the Iranian media has made it dangerous for her to return to Iran | photo: Lewis Liu, official website

You can watch and replay all the games from the Women’s World Championship match using the selector below: 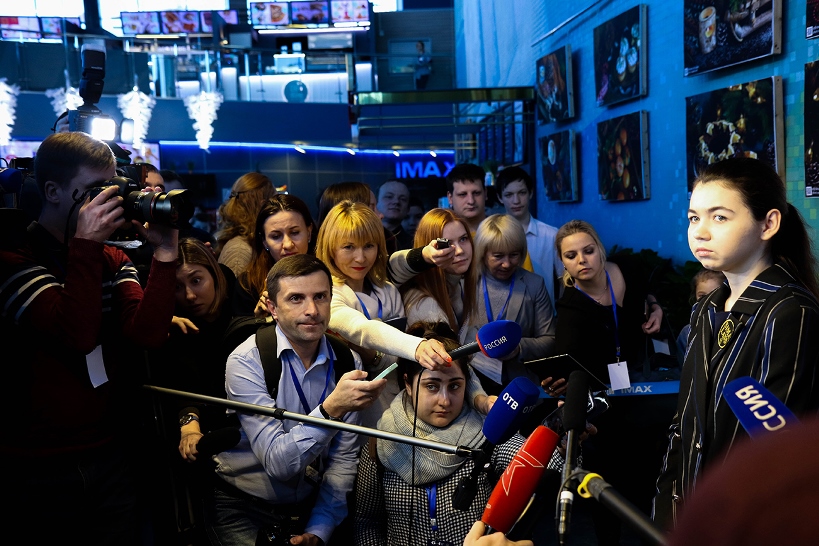 When you go into a World Championship match never having beaten your opponent to fall behind, as Aleksandra Goryachkina did in Game 4, can be a heavy blow, but instead it was Ju Wenjun who looked unconvincing in Game 5. Goryachkina’s switch from 1. d4 to 1.c4 saw Ju Wenjun pause almost a minute on move 1, and a later long think on move 16 led only to a dubious move (16…Qd7!?) that soon saw Black giving up the exchange to 22.Bd7+:

It was up to Black to prove compensation, but not for the first time in the match Ju Wenjun then began to demonstration excellent defensive skills as she advanced her passed pawn to d2:

It looked like the Chinese player would escape again, but here, after using up over half of her remaining 9 minutes, she played not the strong 34…Nc4! but 34…Nc6?, which after 35.Kf1! proved just to be a waste of two tempi as Ju Wenjun belatedly transferred the knight to c4 via a5 anyway.

It was too late, with Goryachkina controlling the d-pawn and pushing her own passed pawn: 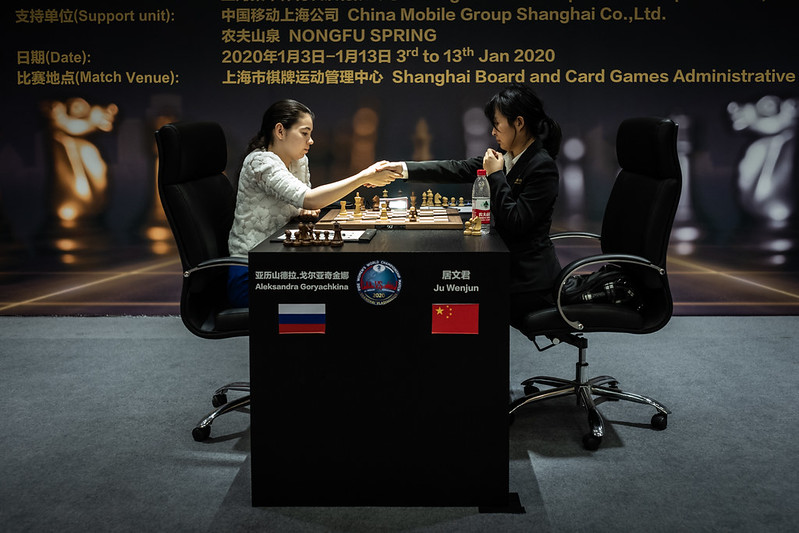 Ju Wenjun resigns after leading the match for only one day | photo: Eteri Kublashvili, official website

Game 6: All square at the halfway point

Perhaps looking to stabilise after that shock Ju Wenjun returned to 1.e4 again, as she had in Game 2, but this time the Berlin that followed soon went in Black’s favour. It was perhaps only Goryachkina’s tendency in the match to go for the driest technical positions that held her back, since in promising situations she exchanged off pieces to get to a pure good knight vs. bad bishop position that ultimately ended drawn in 105 moves:

The players then had a 3-day break, but break perhaps doesn’t sum things up since it was time to fly from Shanghai to Vladivostok, where the match will continue at the Far Eastern Federal University campus on Russian Island. It’s two time zones further east, and literally freezing at this time of year:

It remains to be seen if the new environment will affect the match. On the one hand moving to Russia might be an advantage for Goryachkina, but on the other hand, as we’ve seen with the likes of Vishy Anand and Magnus Carlsen, home “advantage” can be a disadvantage in chess, where no-one is cheering in the playing hall and local fans and media may only mean extra pressure. 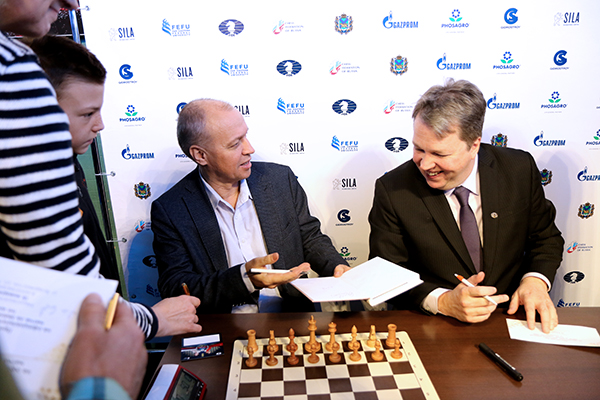 Both Russian and English commentators Sergey Shipov and Nigel Short will be on site in Vladivostok, with women's no. 1 Hou Yifan expected to join the English commentary | photo: Eteri Kublashvili, Russian Chess Federation website

Here’s how Nigel summed up the match so far at the beginning of an interview with Eteri Kublashvili for the Russian Chess Federation website:

Nigel, the first half of the FIDE Women’s World Championship Match is over. How do you assess the game of both players?

It’s a very tough match, actually. My impression from the games is that Goryachkina is on top. I feel that if it continues like this, she will win. But momentum changes in matches very quickly, so it’s merely a comment on the six games that we have had so far. Definitely, Goryachkina has created more chances – that’s it. The score is 3-3, and it’s going to be a match of fine margins. It happens so when there are two players with almost identical ratings.

Is it easier to fight for the crown or defend it?

It is definitely easier to fight for the crown. Aleksandra looks very determined, while Ju, in my opinion, appears nervous. Everybody knows that before the match, she had a very favourable score against Goryachkina, although it was mainly rapid and blitz. Even in the classical game they had, Ju was winning by a trivial manner. She clearly had the upper hand in previous encounters but that’s not entirely surprising as Aleksandra has improved a lot in the last year or two.

I don’t’ think that home advantage is that important but as we talk about “fine margins”, it is an advantage to have something like that. I am sure she’s going to have hundreds of people cheering her on. I’ve got a feeling that there will be a good response at this match here. Muscovites are a bit spoiled as they see so many events (laughs). But Vladivostok is a big city but is rather isolated so that’s a real opportunity to have a really high-profile event. So, that’s my impression. If asked I’d place my stake on the Russian.

Controversy off the board

The Women’s World Championship has managed to attract global media attention, but not because of the players. Chief Arbiter Shohreh Bayat awoke one day during the match to a particularly Iranian nightmare, as she told the BBC:

I turned on my mobile and saw that my picture was everywhere. They were claiming I was not wearing a headscarf and that I wanted to protest against the hijab.

The photographs in the Iranian media merely looked as though Shohreh wasn’t wearing the hijab, but after receiving no guarantees about her safety if she returned to Iran she decided there was nothing more to lose. She stopped wearing the hijab, which she had always disagreed with, and will no longer return to her homeland.

She joins the likes of Dorsa and Borna Derakhshani and most recently, of course, Alireza Firouzja, in leaving Iran in order to pursue a career freely.

When the games start again, however, the focus will switch to the players, with the match entering the finishing straight. With only six games remaining the pressure is set to mount - as in the overall World Championship match, a tie would be decided in a playoff featuring rapid, blitz and even potentially Armageddon chess.

Follow all the action live here on chess24 from the two hours earlier time of 06:30 CET!