Women’s chess title battle goes down to the wire

Ju Wenjun takes a one-point lead into the final classical game of the Women’s World Championship on Friday, meaning a draw is enough to make her champion for the first time. If Tan Zhongyi can win with the black pieces, though, then rapid, blitz and even perhaps Armageddon will follow on Saturday. In that case Ju Wenjun would rue some missed chances as games 7-9 ended in draws. 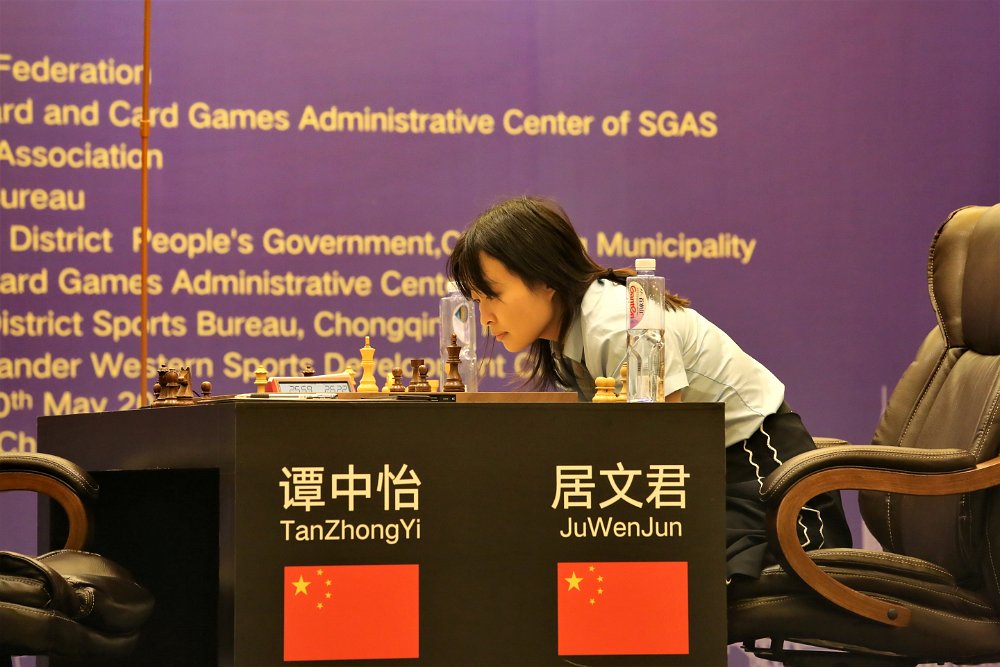 After five decisive games in a row we finally got a run of three draws in the 2018 Women’s World Championship match in Chongqing:

Both players admitted they were worn out after the 6-hour, 125-move win for Tan Zhongyi in Game 6, and that seemed to be visible in Game 7. 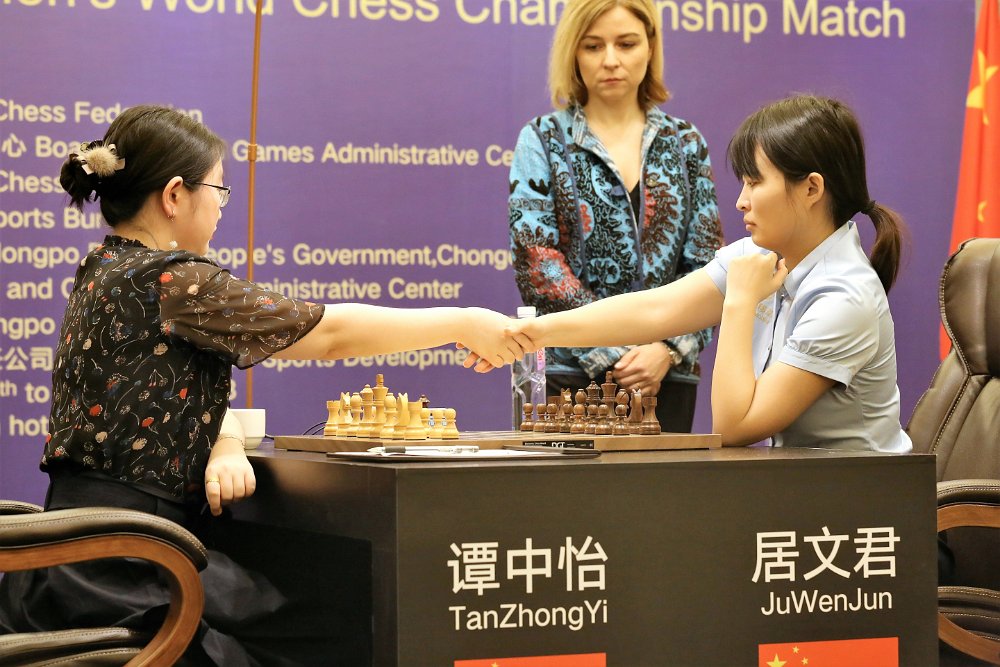 After a 6-hour struggle the day before both players were happy to end their 7th game in three hours | photo: Gu Xiaobing, official website

That allowed White to solve her problems with 20.Nc3!, based on the simple trick that 20…Rxb2 now runs into 21.Nxd5! For a while White had a comfortable edge with control of the d4-square and a chance to attack the hanging pawns, but the possibility of more slipped away on move 27:

After the zwischenzug 27.Bf5! the game would suddenly have sharpened up, but instead Tan Zhongyi played 27.axb3 after just 24 seconds. Material was exchanged and a draw agreed on move 33. 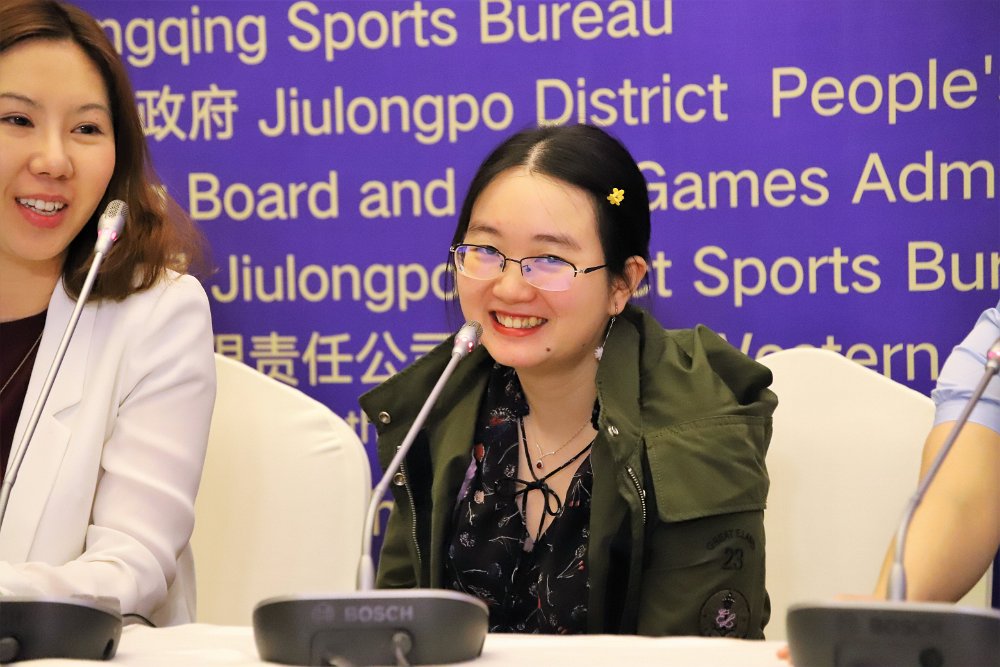 With just three games remaining Tan Zhongyi then decided to go on the offensive with Black in Game 8, playing 4…f6 and 5…g5!? to reach a position seen in only three old games:

Tan compounded her risky opening play by developing her dark-squared bishop to d6 and not g7, a decision she regretted after the game. She wasn’t punished, though, since just when Ju had a great chance to wrap up the World Championship title she missed the moment and the game quickly fizzled out into a draw: 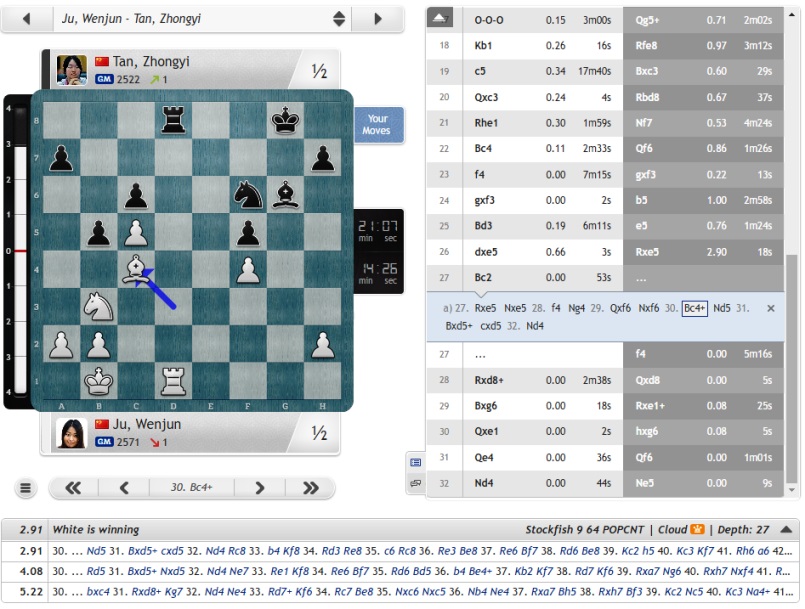 …since although Black doesn’t actually lose material, the ending after 30…Nd5 31.Bxd5+ cxd5 32.Nd4 is one of complete white dominance.

Both players were shocked to discover that after the game, which instead saw 27.Bc2? f4 and mass exchanges with a draw agreed on move 32. 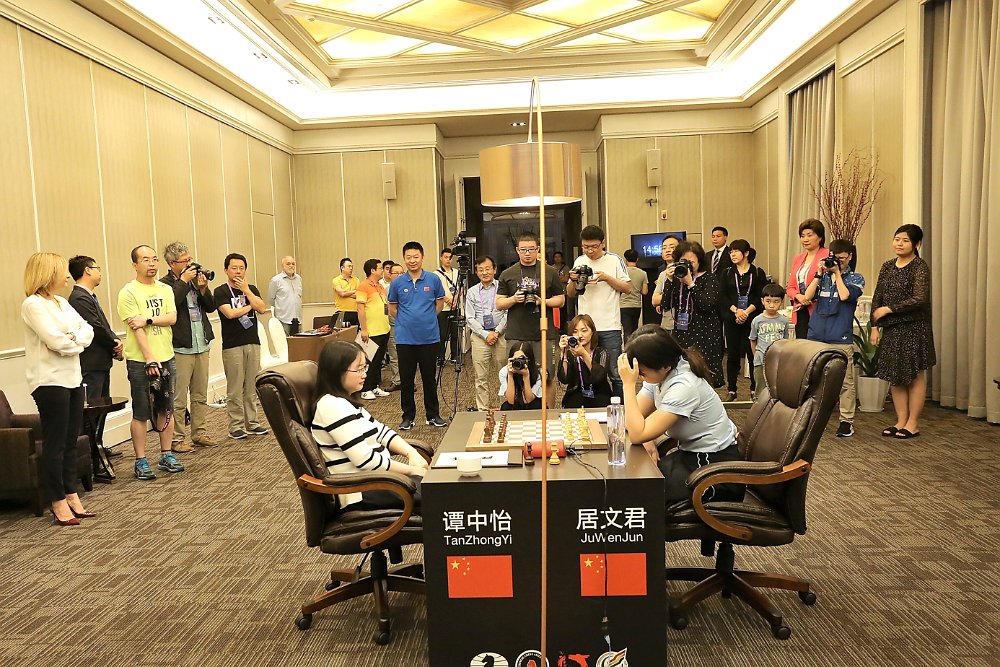 The photographers are still following every twist in the match | photo: Gu Xiaobing, official website 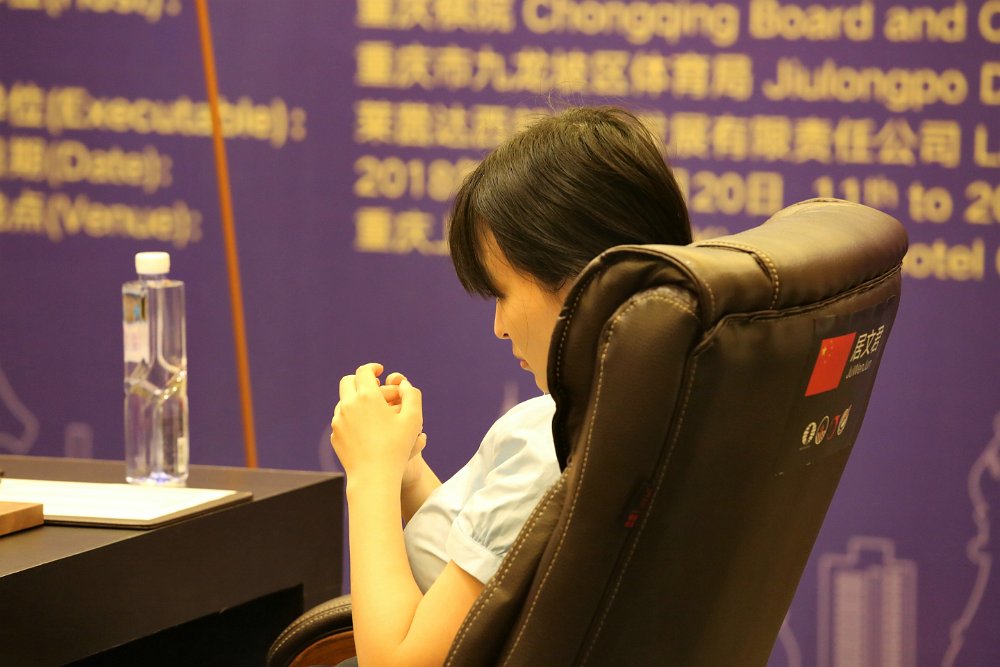 Is the tension getting to the players? | photo: Gu Xiaobing, official website

After that scare Tan Zhongyi’s approach to what you might argue was a “must-win” penultimate game was completely different. She played the 4.Qc2 Nimzo-Indian and seemed unprepared for 10…Nxd2, although one of the last players to have tried the move was Ju Wenjun’s second Ni Hua:

Tan Zhongyi now thought for over 9 minutes before playing 11.Qxd2, a move the watching Jan Gustafsson described in the chess24 chat as “very, very odd”, since Black was supposed to be absolutely fine after 11…dxc4. So it proved, and when Zhongyi began to drift Black gradually took over, until it was a real possibility that the match would end in Game 9. The tension was building and both players were down to around 4 minutes at the time control, when Black may have had a chance for more with 40…h4. The continuation in the game also looked tempting, but it gave Tan Zhongyi a chance to shine after a difficult game with 45.e4! (a trick pointed out in advance by Jan):

It looks like 45…f4 is an easy win for Black, but instead it’s an instant draw, since White can unleash the desperado rook with 46.Re6+!! and the rook can never be taken without allowing stalemate. 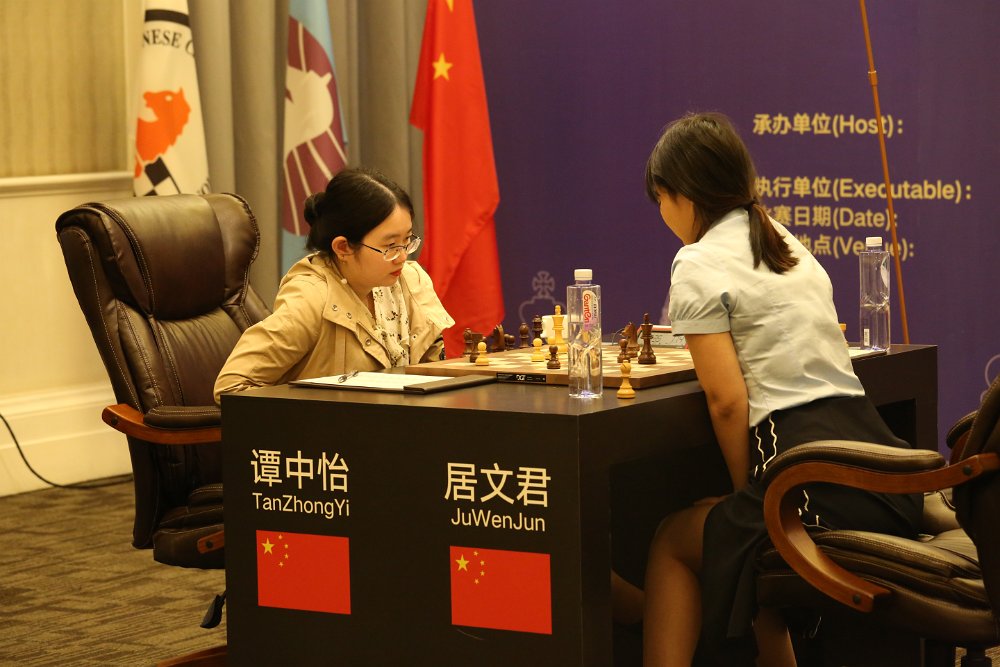 Both players on the edge of their seats | photo: Gu Xiaobing, official website

In the game Ju Wenjun played on with 45…Rh4 46.exf5 Rf4+ 47.Ke3 Rxf5, but she was aware the position was a theoretical draw. Given the match situation it would have been madness not to keep trying for a while, but Tan Zhongyi held firm and the game was drawn in 80 moves. 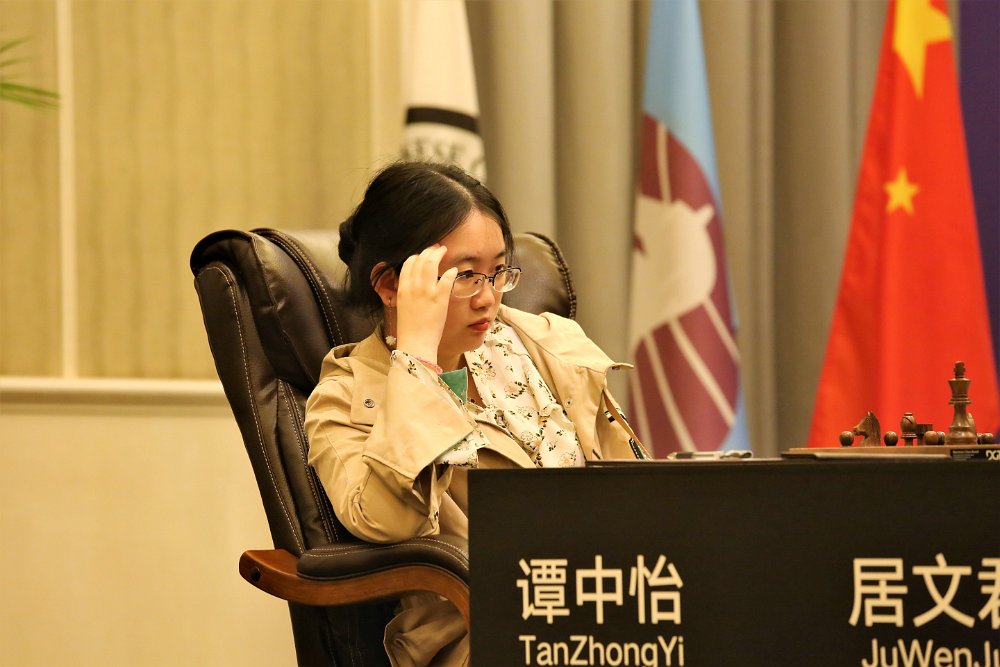 Tan Zhongyi was on the edge of defeat, but hung on to make Friday's Game 10 an all-or-nothing fight! | photo: Gu Xiaobing, official website

That means that the match will go the full distance, with the situation as follows before Friday’s 10th and final classical game:

It’s now very simple. If Ju Wenjun draws or wins she’s the new Women’s World Champion. If Tan Zhongyi can win with Black, though, as she did in Game 6, then the match will go to a playoff on Saturday. The format then, as for the overall World Championship in New York, would be for the players to compete over four 25+10 rapid games. If the match was still drawn they’d then play a pair of 5+3 blitz games. If still drawn they’d play up to four more of those pairs of blitz games, until finally we'd get Armageddon, where White would have five minutes to Black’s four, but a draw would make the player with the black pieces the Women’s World Champion.

Don’t miss the showdown on Friday! You can follow the action here on chess24 from 09:30 CEST.