Women's World Chess Champion Mariya Muzychuk still trails 3:2 in the World Championship match in Lviv, but in Game 5 she had no trouble drawing her second game in a row with the black pieces. Hou Yifan doesn't seem to have found the key to exploiting the white pieces against her Ukrainian opponent. Can Mariya now show the women's no. 1 how it's done in the upcoming games? 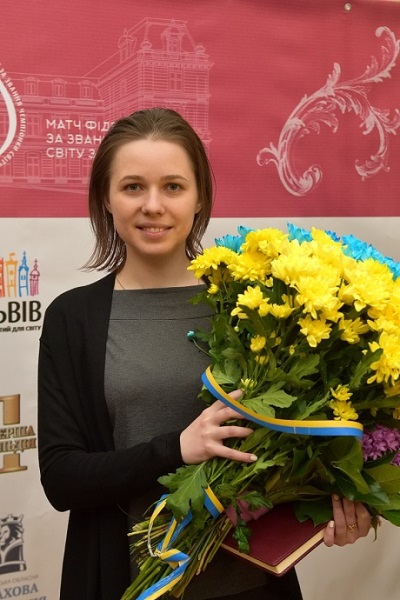 Hard work has its rewards! (although it was also International Women's Day) | photo: official website

It's come as no surprise that Mariya and her team of analysts have done a huge amount of work to prepare for the World Championship match. At the half-way mark Mariya can look back on obtaining three good positions with the black pieces, and we can only applaud the effectiveness and apparent ease with which Mariya has quenched Hou Yifan's activity with the white pieces.

On this occasion the world no. 1 decided to play 1.c4, which was to be expected sooner or later. Hou Yifan already tried it out in early 2014, when her play began to demonstrate a versatility and strategic understanding that was lacking in previous years. There are plenty of strategic games which the Chinese player has won in great style, something Mariya has experienced first hand. It must, therefore, have been top on her team's list of priorities to find a way of combating this initiative - and it looks like the work has paid off. Hou Yifan was met with a secondary line, but one which Mariya had analysed well. It gave the Ukrainian comfortable equality combined with a straightforward plan of action. Let's take a look at the game:

1. c4 Hou Yifan decides to abandon 1. e4 after her failed attempts to gain an advantage in the Open Ruy Lopez.

1... c6 2. ♘f3 d5 3. g3 g6 A clever move-order with the nuance that it delays the development of the black knight. We'll soon see the concrete idea of the Ukrainian player.

4. ♗g2 ♗g7 5. ♕a4 dxc4! 6. ♕xc4 e5! Praise is due not only for what are objectively good moves but also for excellent preparation! Mariya was moving instantly and demonstrating, once again, that she's done a lot of productive work before this World Championship match.

7. d3 ♘e7 8. O-O ♘a6 9. ♗d2 O-O Black has a very comfortable position in which her pieces have a clear plan - the knight is well-placed on a6 in order to head to d5 via c7 at any moment, the e7-knight has a clear path to d4, and while one bishop is fianchettoed the other can either come out to e6 with tempo or to g4 if the white queen moves. This is one of those cases where a position has to be evaluated not only in objective terms but also based on the ease with which it can be played.

18. h4 Hou Yifan was no doubt already contemplating playing e4, but she also has in mind that she can weaken the black queenside at any moment by playing h5 - nice flexible play by the women's no. 1!

18... ♖e7 The plan of doubling on the e-file suggests itself.

19. e4 dxe3 Not exchanging would have given White too much new breathing space.

20. ♘xe3 ♗e6 21. d4 In exchange for breaking up the position White has had to accept an isolated pawn. The good news for Hou Yifan, though, is that her minor pieces combine perfectly in order to prepare the d5-break, which may pose Black problems.

21... ♖ae8 22. b3 Necessary in order to bring the a1-rook into play, since otherwise Mariya could call the bluff and take the a2-pawn.

After the game Mariya explained that she felt she had an edge after the opening:

That means one decisive game is still all that divides the players:

This second draw in a row with the black pieces should give Mariya a boost, since she now has three games with White remaining in order to try and level the scores. It won't be easy, though. Hou Yifan almost always remains calm and focussed and, although the last two games haven't gone to plan, there's no reason to expect she'll get nervous or stop demonstrating play of the very highest level.

Concentration has always been one of Hou Yifan's strong suits | photo: official website

Game 6 of the match will be here on chess24 from 14:30 CET on Wednesday, and you can replay all the games in the selector below: