A new era in women’s chess began in Kazan, Russia on Friday as eight of the world’s best female players began the battle to qualify for a World Championship match against Ju Wenjun. Women’s world no. 3 Mariya Muzychuk is the top seed for the 14-round tournament, but the bottom seed, world no. 12 Valentina Gunina, is rated only 57 points lower. Gunina was involved in a thriller against Kateryna Lagno in the opening round, but in the end all four games ended in draws. 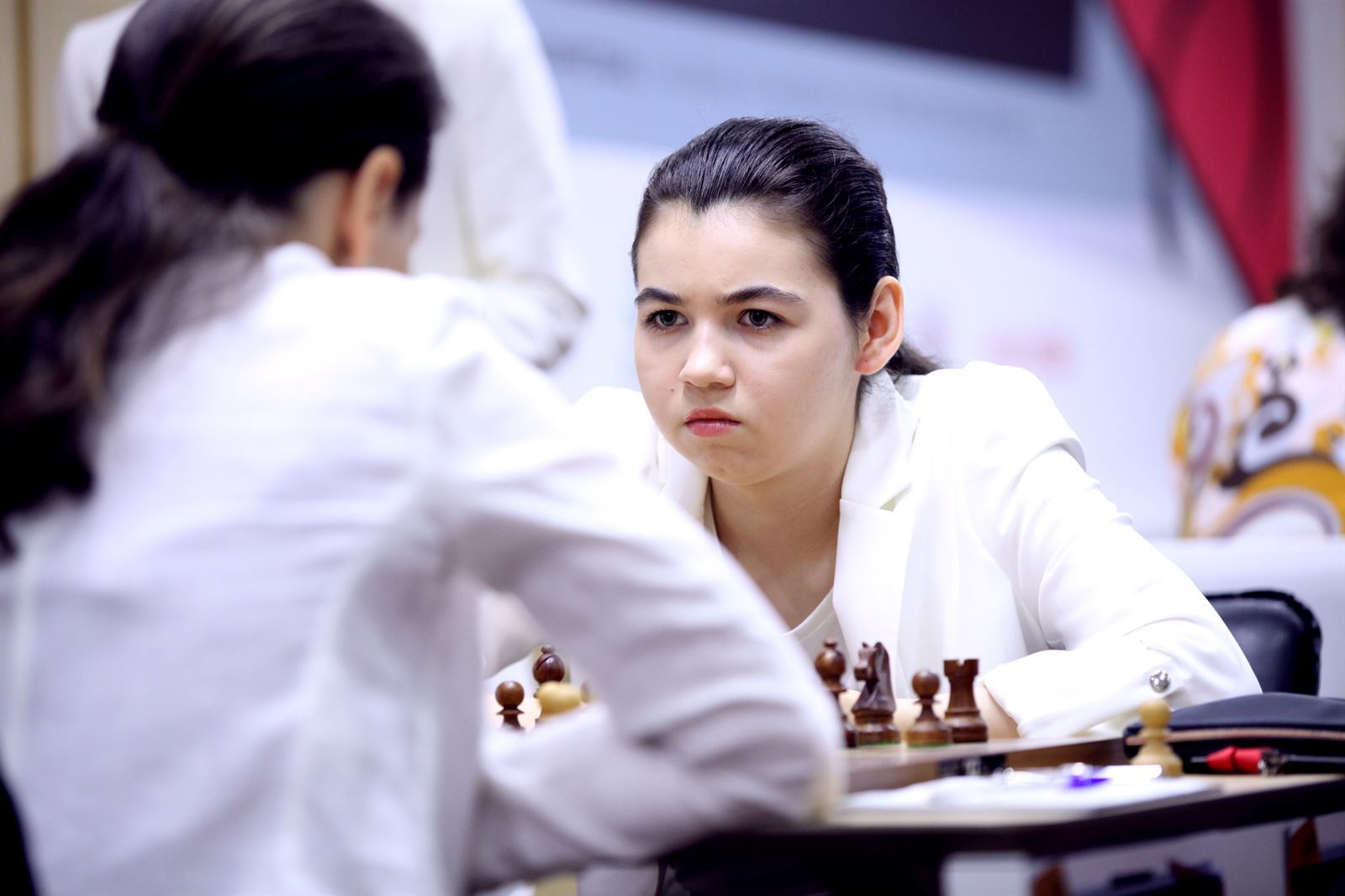 Until this year the Women’s World Championship cycle had been very different to the overall cycle, with alternating matches and 64-player knockouts. Hou Yifan retained the title in a match against Humpy Koneru in 2011, then lost it in 2012 as Anna Ushenina won the knockout, then regained it by beating Ushenina in a match in 2013, then lost it to Mariya Muzychuk in the 2015 knockout, then regained it in a 2016 match, then lost it in the 2017 knockout to Tan Zhongyi. Hou Yifan’s frustration with the system saw her fail to take part in either of those last two knockouts and then pull out of the cycle entirely. 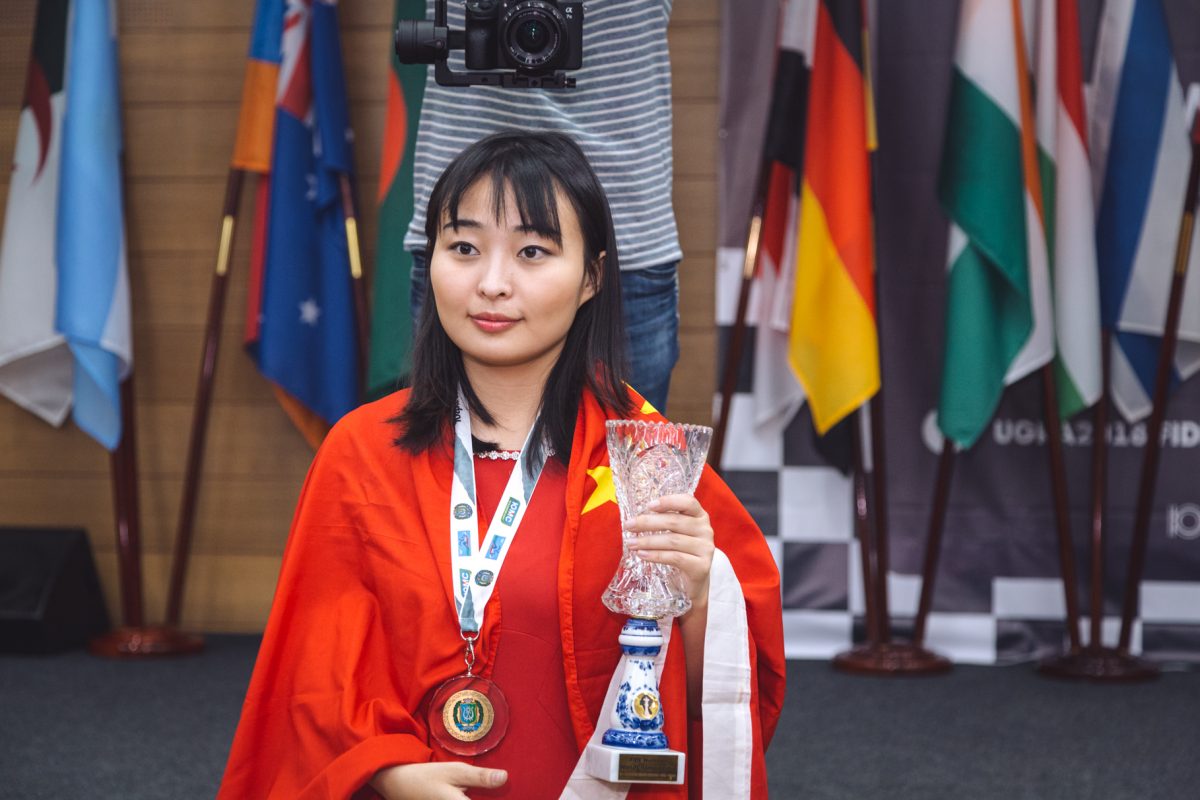 The players are battling for the right to play the reigning Women's World Champion, Ju Wenjun | photo: official website

Her Chinese compatriot and women’s world no. 2 Ju Wenjun took over, pulling off the heroic feat of not just winning the title in a match against Tan Zhongyi in May 2018 but retaining it by winning the 64-player knockout in Khanty-Mansiysk in November of the same year. That triumph coincided with a new FIDE leadership, and the decision to adopt the same system as in the overall cycle where the World Champion always gets to defend the title in a match, with a Candidates Tournament determining the challenger. 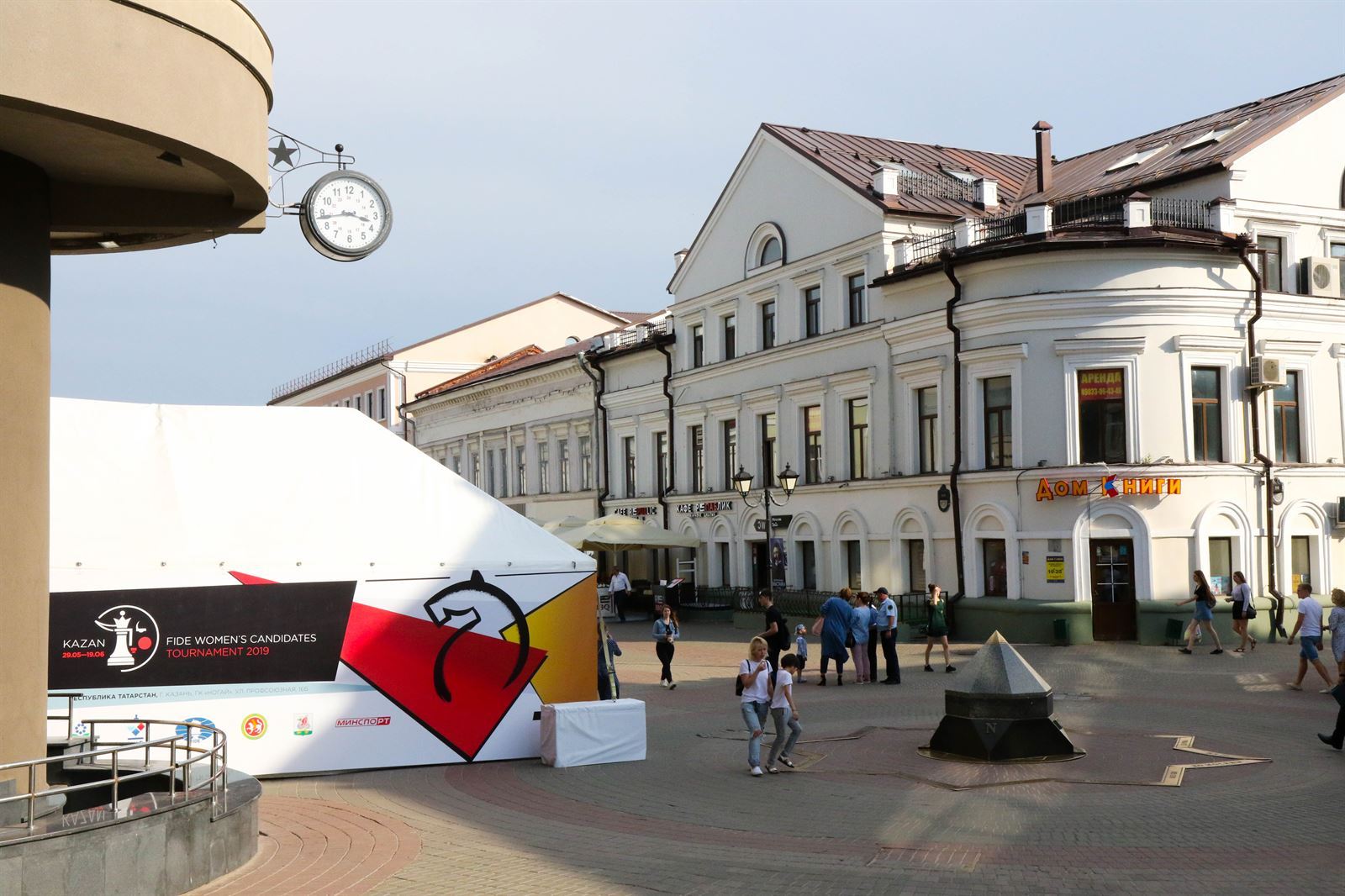 The tournament is being played in Hotel Nogai in the heart of Kazan, with a commentary tent on a main street | photo: Eteri Kublashvili, official website 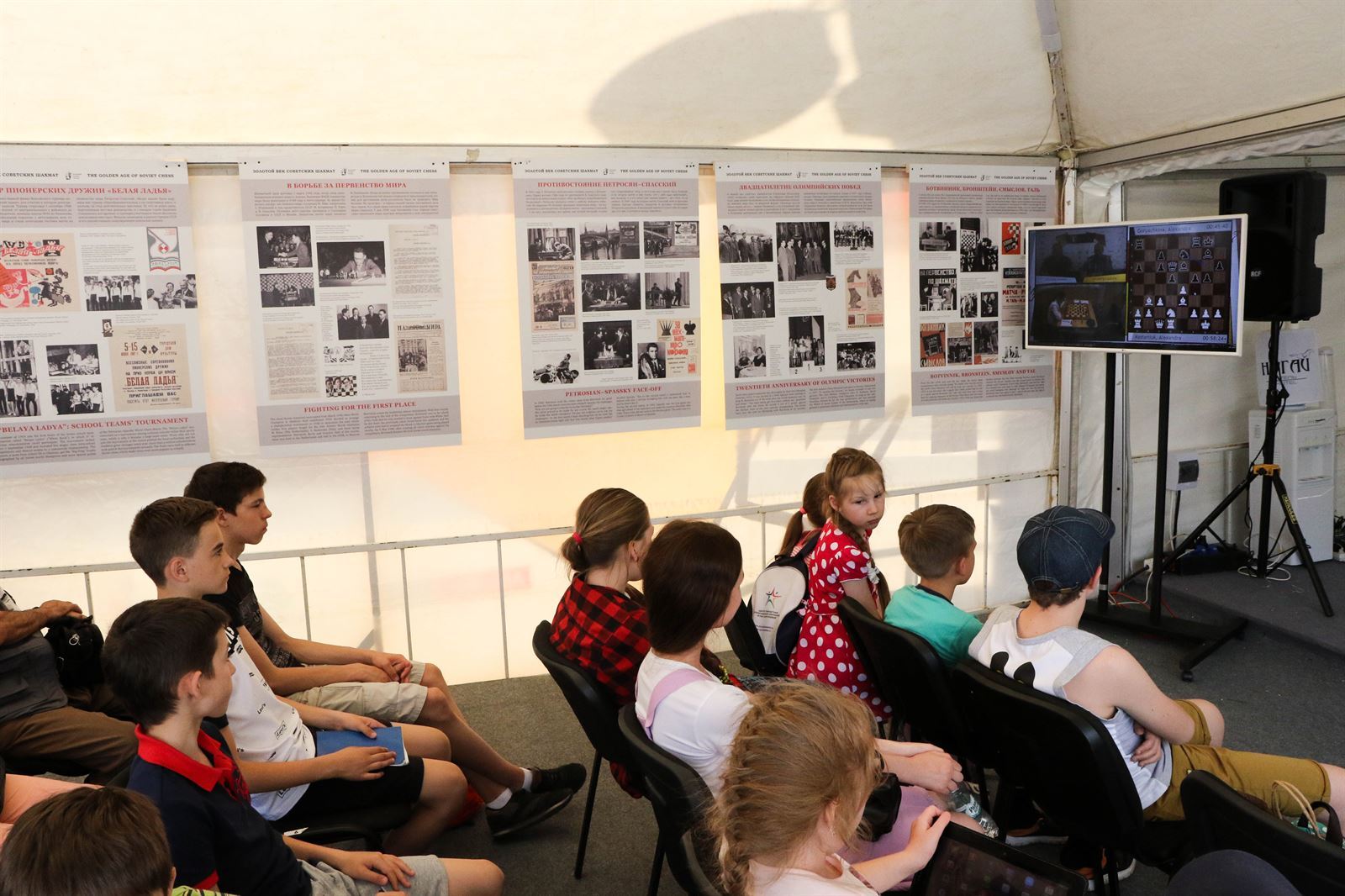 That brings us to Kazan, Russia, where from May 31st to June 17th eight players are competing in a gruelling 14-round event. Except for a shorter time control (90 minutes for 40 moves, then 30 minutes to the end of the game, with a 30-second increment from move 1) the rules are the same as for the overall Candidates Tournament. That includes the much criticised situation that a tie for 1st place will be split by head-to-head, no. of wins and Sonneborn-Berger, and only in the very unlikely case of those tiebreaks being equal will a playoff be held. The top prize is 50,000 euro, out of a total 200,000 euro prize fund, but the one real goal is to reach a 500,000 euro World Championship match against Ju Wenjun. 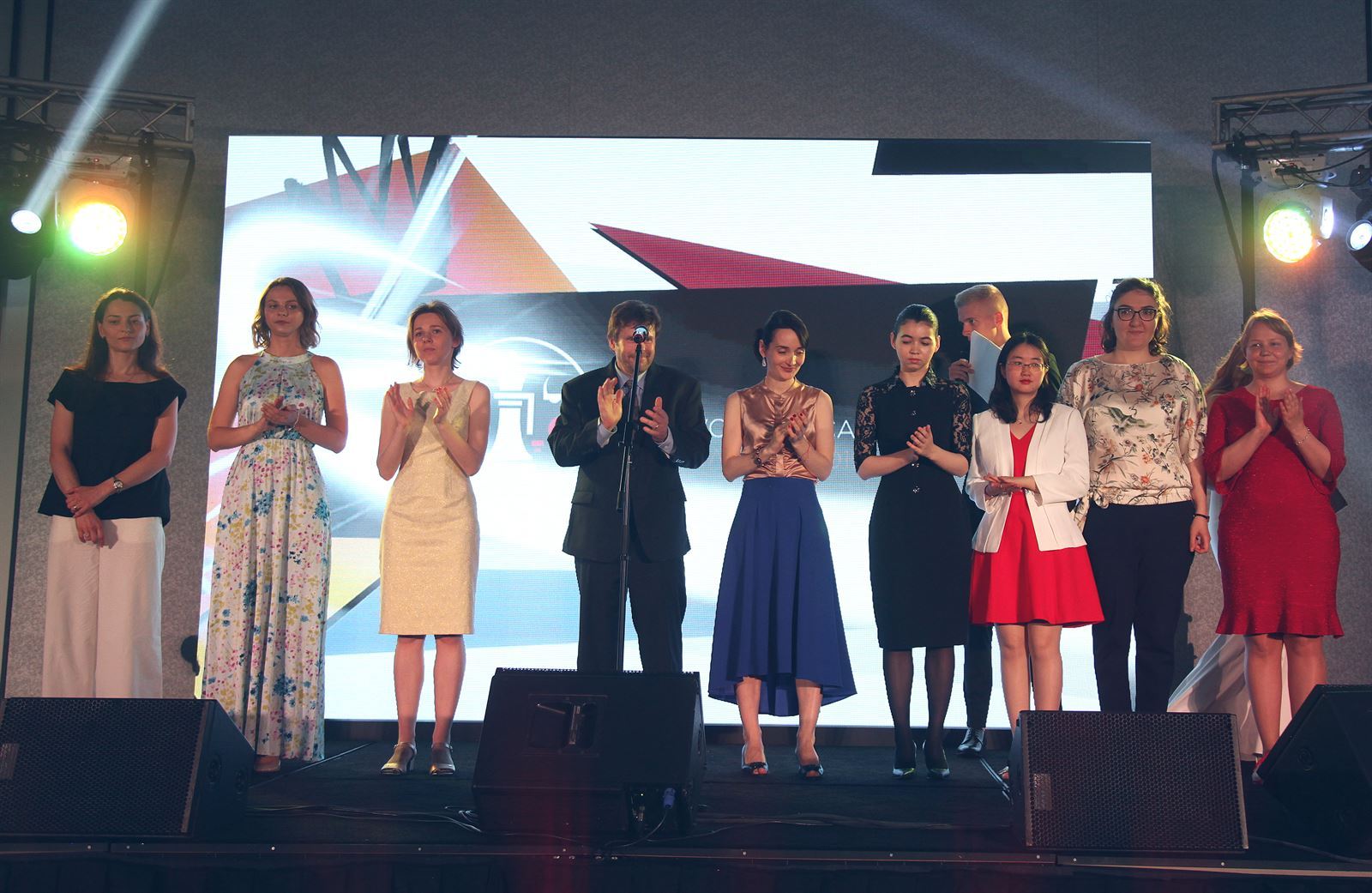 The eight players on the stage at the opening ceremony | photo: official website

The line-up consists of the semi-finalists from last-year's knockout (Kateryna Lagno, Alexandra Kosteniuk and Mariya Muzychuk) and five players based on their average rating for 2018 (Anna Muzychuk, Tan Zhongyi, Nana Dzagnidze, Valentina Gunina and Aleksandra Goryachkina). Goryachkina made it in as the first reserve, since Hou Yifan, currently studying at Oxford University, chose not to accept her invitation.

You can check out all the pairings and games in the selector below:

And here’s the live commentary on Round 1:

Round 1: All drawn, but not without drama

The Candidates Tournament regulations aim to pair players from the same country as early as possible so as to make collusion less likely - at this stage no-one knows who’ll be challenging for first place. In this case that meant starting with two all-Russian clashes and one “clash” between two Ukrainian sisters, Anna and Mariya Muzychuk. To no-one’s surprise that game ended in a draw by repetition in about 20 minutes. 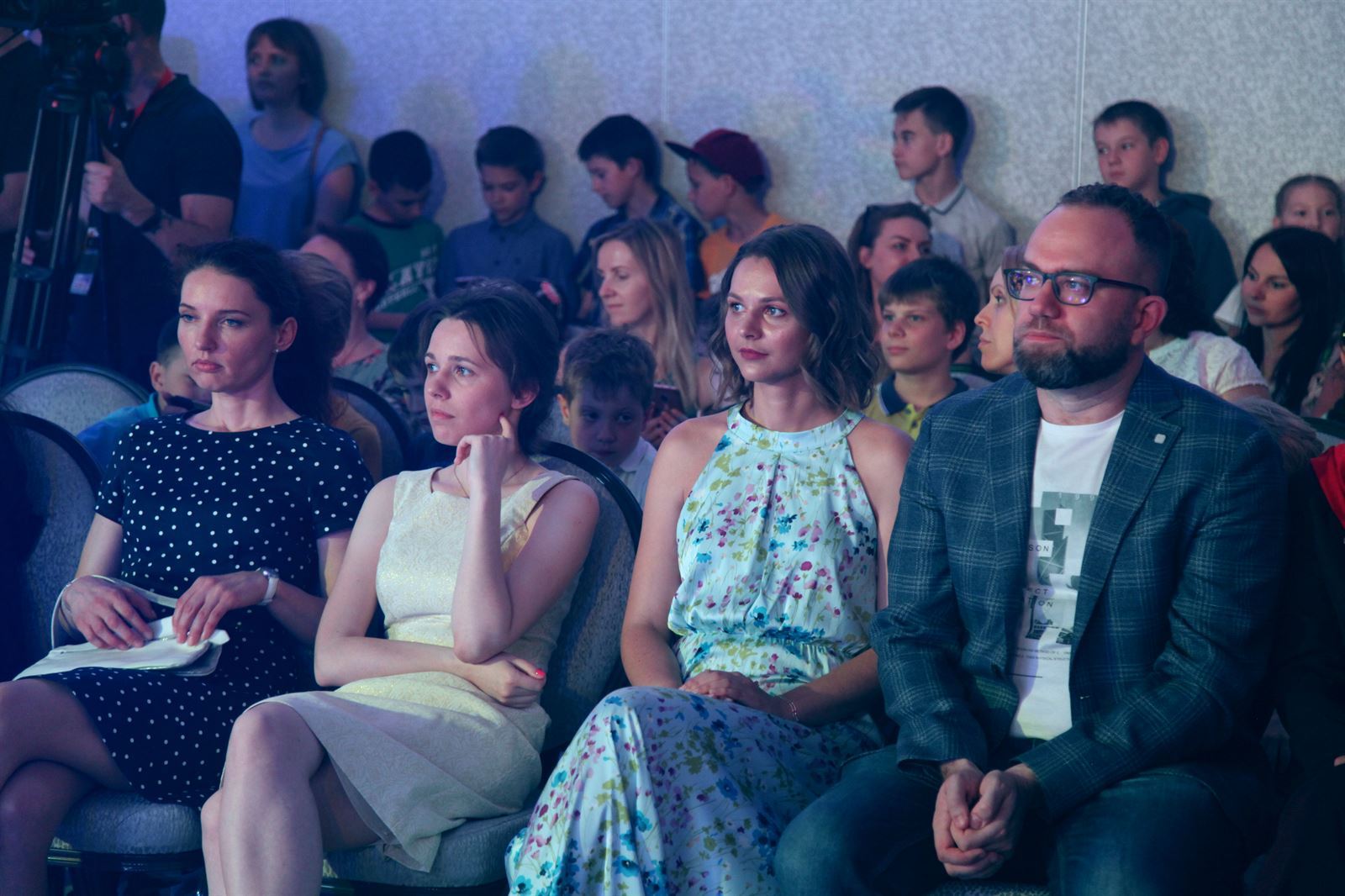 In the post-game interview Mariya, who together with Kosteniuk and Tan Zhongyi is one of three former World Champions in the field, said that her main goal now is to reach 2600, something her sister Anna achieved in the past: 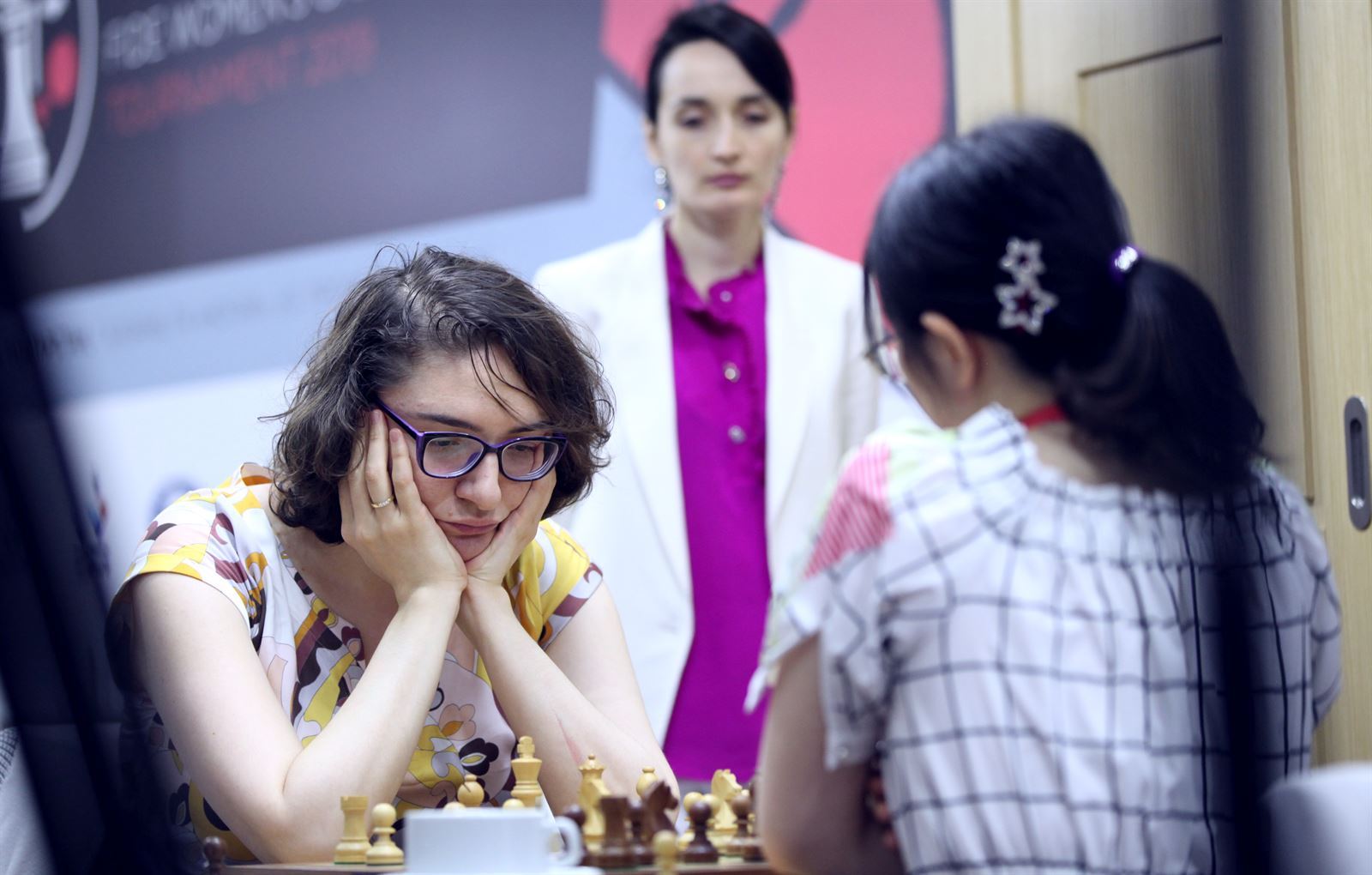 All the other games were hard-fought. Nana Dzagnidze said she’d been surprised by Tan Zhongyi’s Petroff Defence, but still thought she had a big advantage until 20…Ba6! appeared on the board:

The tactical point is of course that 21.Bxa6?? would run into 21…Bxh2+, picking up the white queen. After 21.Nd5 White was still doing fine, but Nana decided to take a draw by repetition on move 32.

No-one was backing down from a fight in the all-Russian clashes, with Kosteniuk-Goryachkina an extremely unbalanced battle in which White first had a significant advantage and then Black spoiled what was probably a winning edge after the time control. 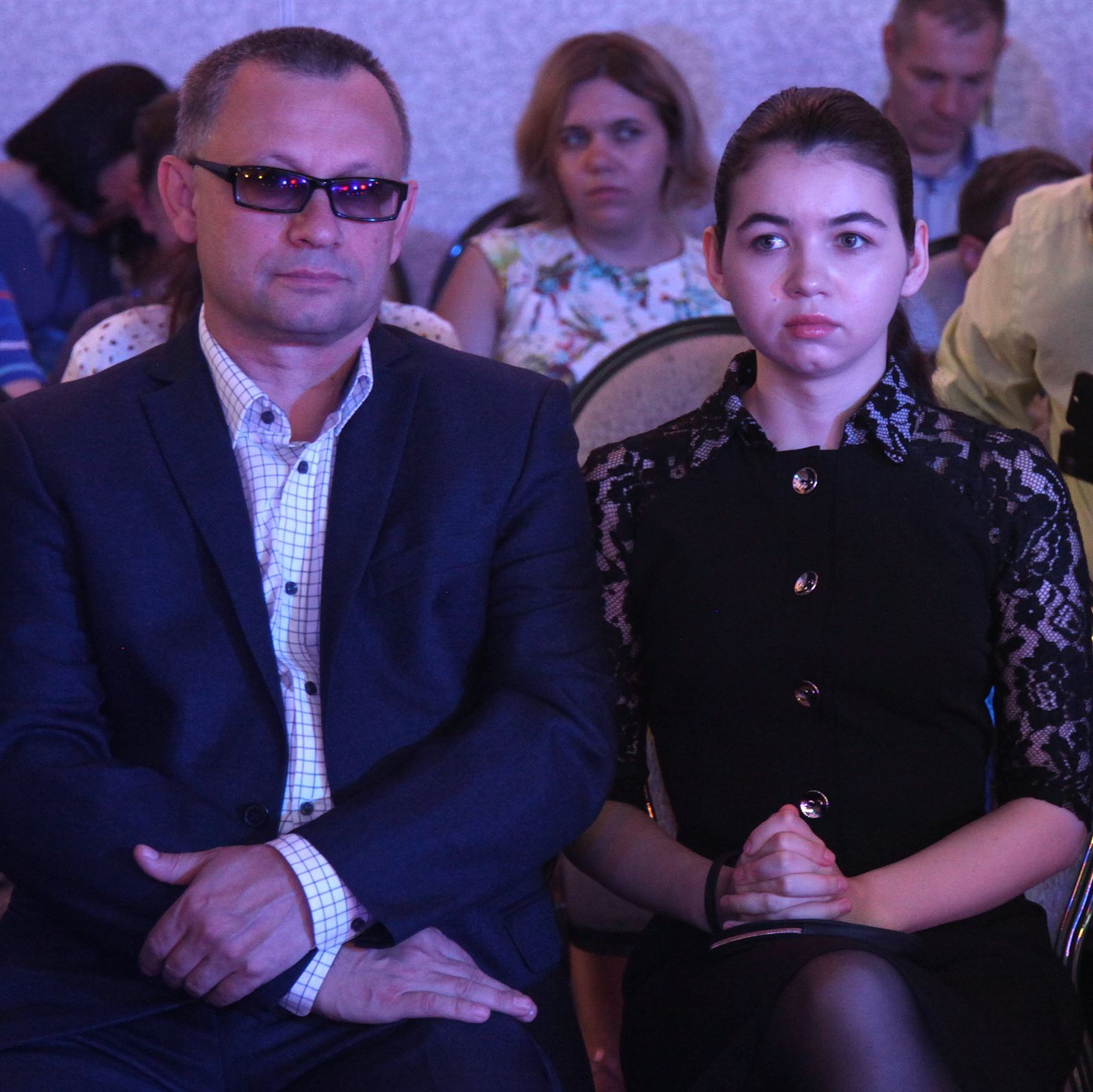 20-year-old Aleksandra Goryachkina is the youngest player in the field and stands out in another unusual way for a modern chess star – when Anastasia Karlovich asks her a question in English at the start of the post-game interview she explains in Russian that she doesn’t speak English!

The highlight of the day was the other Russian battle, Gunina-Lagno. Valentina Gunina effortlessly gained a big advantage from the opening, but Kateryna Lagno explained that her opponent, “looked like she wanted to put pressure more on the clock than the position”. 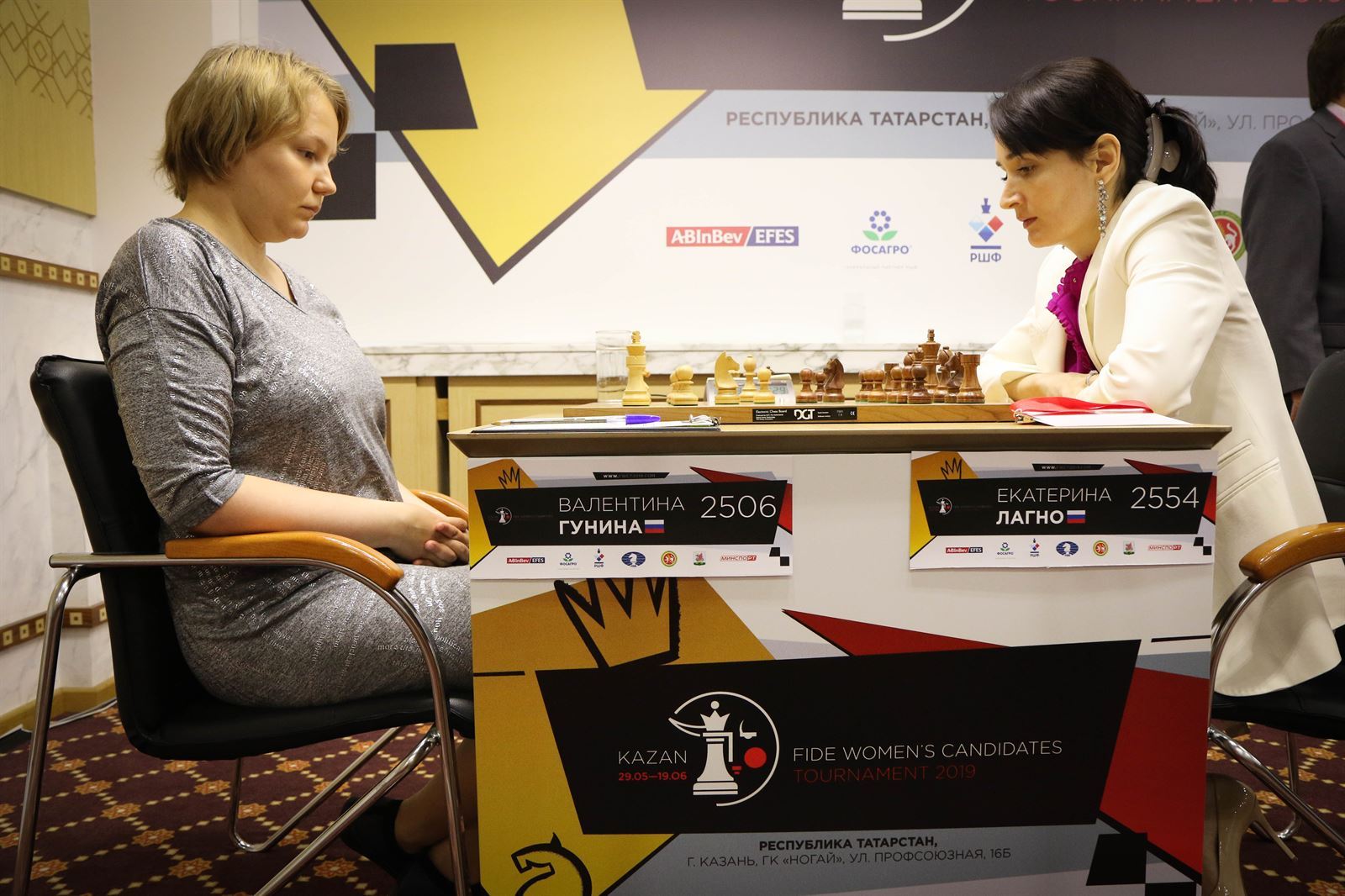 By the time control Black had taken complete control…

…but, in a desperate situation, Gunina came up with a spark of genius, 46.Ra1!

After 46…Qxa1?! (queen retreats were better, but Black’s position would no longer be clearly winning) 47.Qe7+ Kg8 48.Qe6+ Kf8 it turned out 49.Qc8+! was a move Lagno had missed, though she still thought her king would be able to escape from perpetual check. The later 55.g3! would come as a very cold shower:

Kateryna’s first thought on seeing this move was that there was nothing she could do against Qh4#:


I wanted to resign, but I saw 55…Bg5, so the only move, and it should be a draw still, but it was not a great moment after g3!

After that scare for Black Valentina went on to give perpetual check with 56.Qxh7+ and the game ended on move 60.

It wasn’t just the moves on the board that had been tough for the players, however, since the tournament’s location on a pedestrianized street in the middle of Kazan had its drawbacks!

Gunina commented, “I like Viktor Tsoi, but not during the game!” and was also unhappy with the temperature: “it was cold, the air conditioning was so cold!” Kateryna Lagno was also bothered by the music, and broken promises:


We knew that there will be some music, and the organisers said that they will do something. I just wonder how can we feel now? We have to be happy that it was not so loud?

We can expect some solution to be found to that issue, while the action will continue for another 13 rounds, with Elizabeth Paehtz and Evgeny Miroshnichenko commentating in English each day from 14:00 CEST. Tune into all the action LIVE here on chess24!