Why Kramnik isn’t playing in Zurich 2014

The 3rd Edition of the Zurich Chess Challenge is set to be spectacular, featuring 6 players from the Top 8 and the first meeting between Magnus Carlsen and Vishy Anand after their World Championship match. The one surprise absence is Vladimir Kramnik. In a recent interview the event’s sponsor explained why and also announced Kramnik has already confirmed he’ll play in 2015 (so no retirement just yet!).

Oleg Skvortsov made his fortune in diamonds and has an unusual hobby – although only a strong amateur he likes to play classical chess (4-6 hour games) for large amounts of money against the world’s best players (this week he’s playing Fabiano Caruana in Antwerp). Good news for the players, but luckily for the rest of us in 2012 he also got in touch with Vladimir Kramnik about organising a public event. The fruit of that was a match between Kramnik and Levon Aronian in Zurich. A year later he organised a 4-player tournament. 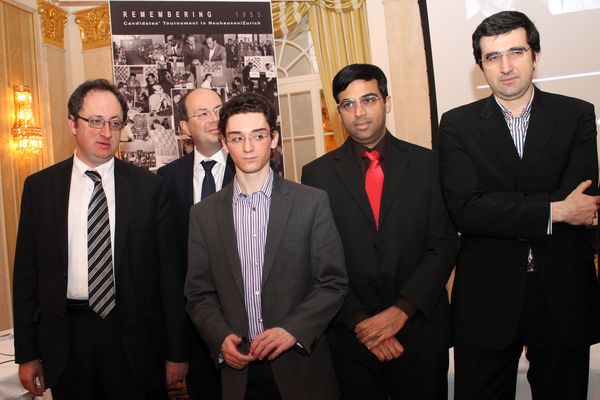 In 2014 the original plan was to double the number again to 8, but the 6 players who will play are none too shabby!

Skvortsov was interviewed by Vladimir Barsky for ChessPro and talked about organising the event. The original dates were 7-14 February 2014, but when they realised that would mean opening on the same day as the Sochi Winter Olympics they switched to 29 January - 4 February, just after Wijk aan Zee.

The interviewer of course asked about the absence of Kramnik:

Why isn’t Vladimir Kramnik playing in Zurich in 2014?

We delayed announcing the line-up for a long time because we were waiting for Vladimir to finally win the World Cup. We were in touch and explained what changes were taking place and so on. When he returned from Norway we phoned each other and discussed it all again. Unfortunately it turned out the dates weren’t very convenient for Kramnik. His plans involve a program of preparation for the Candidates Tournament. That tournament will take place in March, as it did this year. Perhaps Vladimir is worried the dates of the Candidates will be switched at the last minute again. We agreed Kramnik will play our event in 2015. In 2014, meanwhile, Vladimir has been invited to come to the opening ceremony as an honoured guest.

It’s also possible Kramnik was less than delighted with the new format for the event, involving a first round of classical games followed by a round of rapid. The rapid games will, unusually, also be counted towards the players’ overall scores, although Oleg also appears to be a fan of classical chess:

How will ratings be calculated?

Based on the five classical games.

I don’t think so. Why should we? Few are interested in rapid ratings, in my view. The majority of chess fans around the world look only at the classical rating. The title of World Blitz Champion or World Rapid Champion doesn’t interest them much.

For a win in classical chess you’ll get two points?

Yes, and one for rapid. It seems to us that a win in classical chess is two times more valuable than a win in rapid.

Skvortsov explained the economics of classical or rapid events, and as one of a new breed of wealthy Russian chess sponsors had interesting views on the state of funding for chess:

In contrast, for instance, to the London Chess Classic we retained classical chess. Of course, holding a tournament in 2-3 days is much cheaper. You can understand a lot of organisers: there’s not so much money.

Where can you find money for chess?

There are almost no corporate sponsors, or sponsors in general – it’s pure patronage. Perhaps what I’ve said sounds harsh, but chess players should understand it.

In my view that’s a superficial prosperity which could disappear at any moment. The tournaments in Linares, Mainz and Monte Carlo all disappeared that way… It seems to me, therefore, that chess players should try to come to terms with patrons. I don’t particularly like the word “patron”, it’s too bombastic, but in terms of the precise meaning “sponsor” doesn’t fit, because with chess a sponsor gets almost no real impact. It’s not tennis, American football, baseball or football.

Let’s hope Skvortsov is proven wrong in future! You can read the whole interview (in Russian) at ChessPro.