Wesley So wins his 3rd US Chess Championship

Wesley So beat Fabiano Caruana and Sam Sevian in rapid playoffs to win the 2021 US Chess Championship, becoming the first player to defend the title since Gata Kamsky in 2014. “I think Fabi should have won today considering how well he played,” said Wesley, but despite getting into a close to lost position against Fabiano he hit back and won on time in an already winning position. Caruana went on to beat Sevian, but Wesley cruised to victory against Sam to clinch the title. 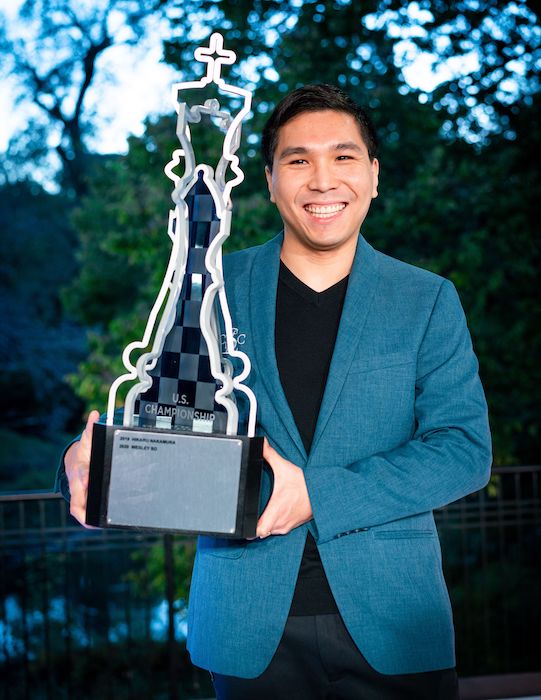 Wesley So retains his US Championship trophy | photo: Lennart Ootes

You can replay all the games from the 2021 US Chess Championship using the selector below.

There's a free US Championships Legends course at Chessable — check it out here! 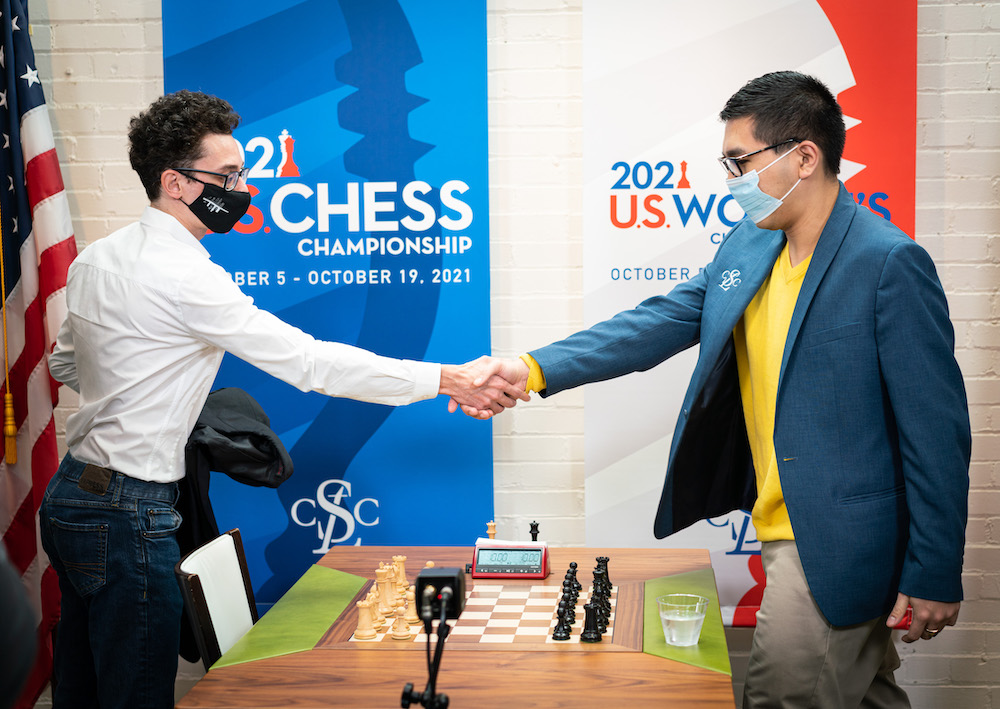 Wesley So hadn't managed to defeat any of his main rivals in classical chess, but he beat Fabiano Caruana in the game that mattered | photo: Lennart Ootes

All the momentum in the final stages of the 2021 US Chess Championship was with Fabiano Caruana, who stormed back after two losses to score 4/5 at the finish. He came within a whisker of taking the title in the final round, when he was battling for a win against Sam Shankland, while Wesley So and Sam Sevian had opted for quick draws. Wesley had written off his chances, so that the draw in that game was a reprieve:

Very happy, it’s like giving me a new life! I thought the tournament was pretty much over yesterday. Fabiano almost won three games in a row. It just gave me a new breath of life that this tournament might not be over, that I might still have some chances, and I’d like to thank Sam for saving that difficult game.

That meant that despite a somewhat lacklustre tournament by his standards — Wesley scored 9 draws and defeated Dariusz Swiercz and John Burke — he was right back in the hunt in the playoff, where he would compete with Fabi and Sam Sevian in 10 minutes rapid chess, with a 2-second delay each move.

Wesley was happy with how the opening went against Fabiano in the crucial first playoff game, but then things slipped out of his control.

33.Nc6+! was a star move, and it looked like Caruana was going to win in style.

Fabi’s 38.e4?! was the most obvious move in the world, but in fact 38.Rf1!, provoking 38…f6 first, was much stronger. It was almost impossible to see why in a rapid game, however, with the difference only emerging in the game after 38…Nc8! 39.Rb1 Nd6 (“I’m pretty sure he totally missed this Nc8-Nd6 idea, he probably thought he was just winning” — Wesley). The point is that now after 40.Rb8+ Kc7 41.Rg8 if the pawn is on f7 then White wins a crucial tempo by being able to take on g7 with check. 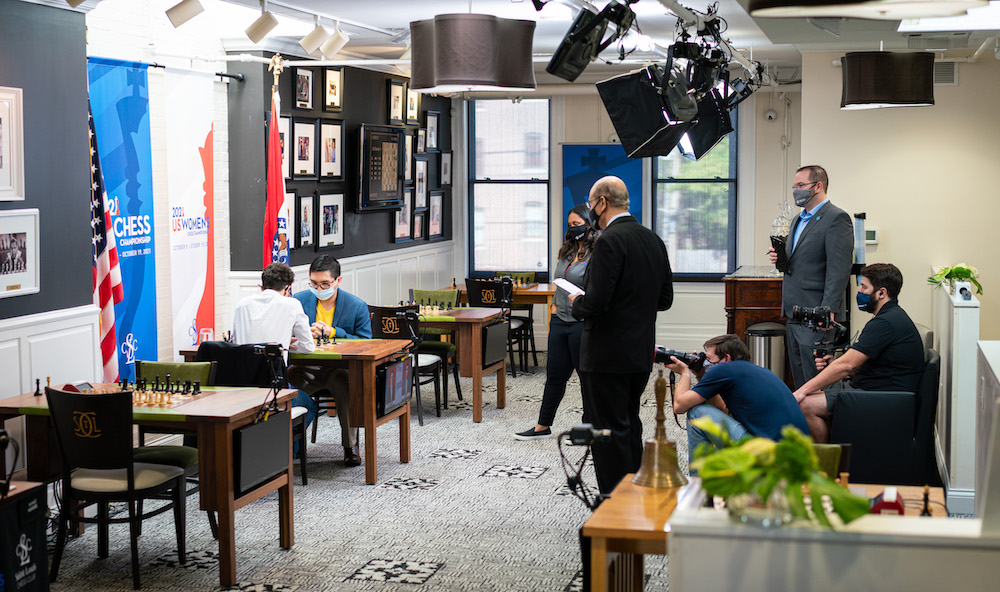 Only one playoff game was played at a time | photo: Lennart Ootes

Instead in the game after 40.Kf2 Wesley was able to use his own trump card with 40…c4!


The thing is in this game I was playing with no pressure. I didn’t expect this playoff, so I was just playing fast, playing chess. If chances come, good, if I lose, that’s fine too. So I was absolutely just playing very calmly, and it paid off. 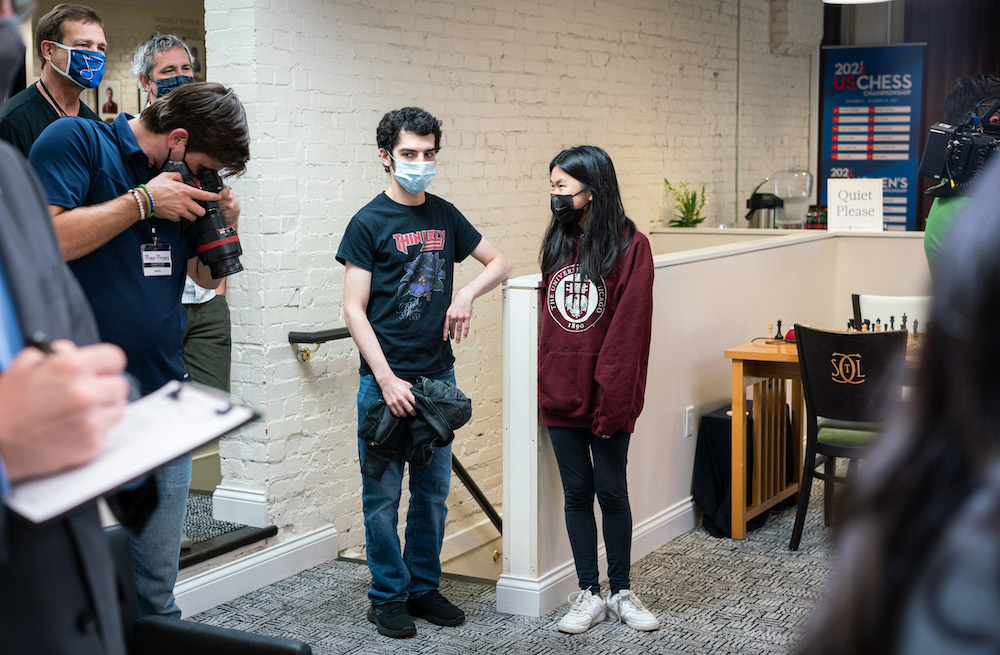 US Women's Champion Carissa Yip and John Burke were among the spectators | photo: Lennart Ootes

It was suddenly very double-edged, and another factor came into play — Fabiano’s clock.

I think Fabi and I had no idea what was going on, and then later in the game I look at the clock and he had one second. Since this is delay, you don’t gain any time, so next thing I looked he lost on time. The arbiters pointed it out also. 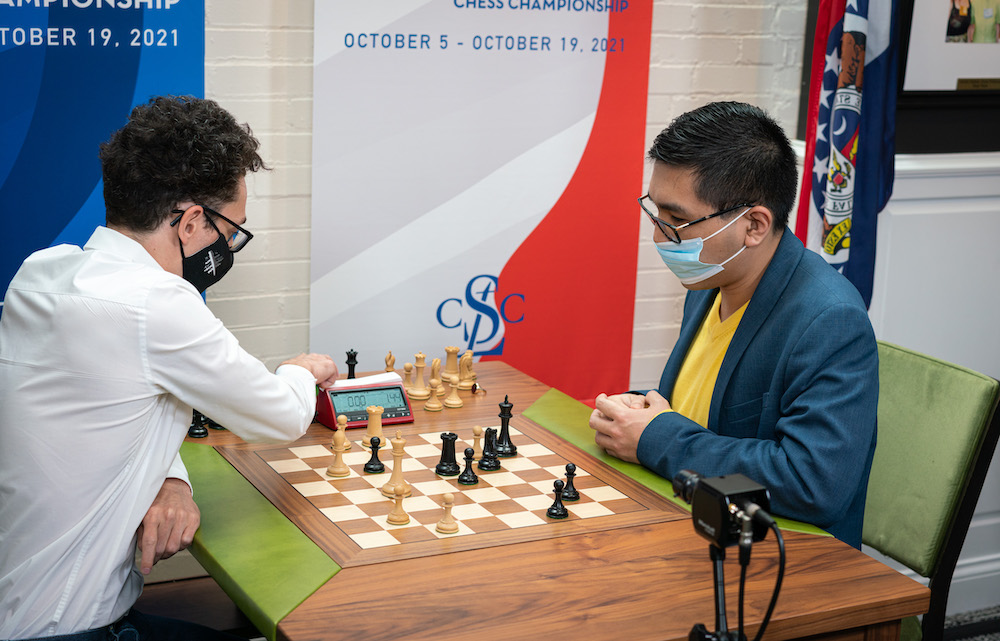 That was a tough blow for Fabiano Caruana, but he struck back right away in the second playoff game, against Sam Sevian. Despite having the black pieces he dominated from the start and timed the 42…e4! break perfectly. 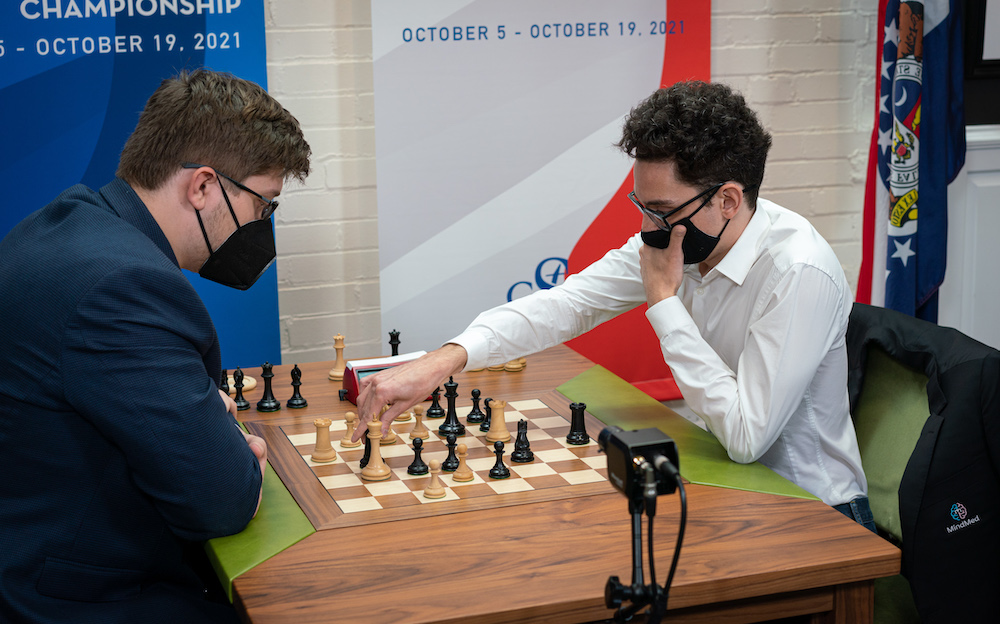 That was a great comeback from Fabi, but also the perfect result for Wesley. He now knew that a draw with the white pieces would make him the champion with 1.5/2 compared to Fabi’s 1/2, while even if he lost he’d still get another chance in a blitz playoff, since all three players would be tied on one point. 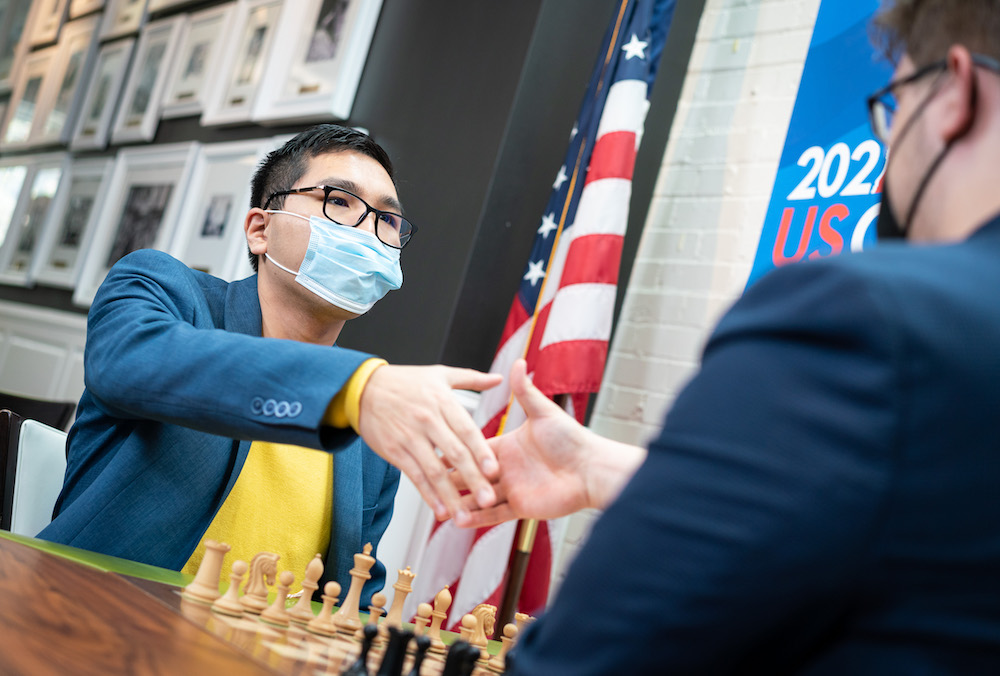 Wesley So now knew he was a big favourite to win the title | photo: Lennart Ootes

Wesley is one of the very toughest players in the world to beat on demand with the black pieces in any case, but he revealed afterwards that he’d also prepared specifically for this scenario.

During the last three months I prepared a repertoire for White with 1.d4 when I only want a draw, so against all openings I prepared drawish lines — against the Nimzo, Grünfeld, King’s Indian, Queen’s Gambit, so if I want to play safe I have a very safe opening repertoire with 1.d4. It helps a lot that I’m White. With Black anything can happen and Sam Sevian is a very dangerous player.

Sam went for the King’s Indian, but to avoid White being able to force queens off the board early he had to make concessions, which played right into Wesley’s hands. What followed was an extremely smooth victory in a game where Sevian never got a chance.

That meant Wesley had done it, clinching victory and the $50,000 top prize. 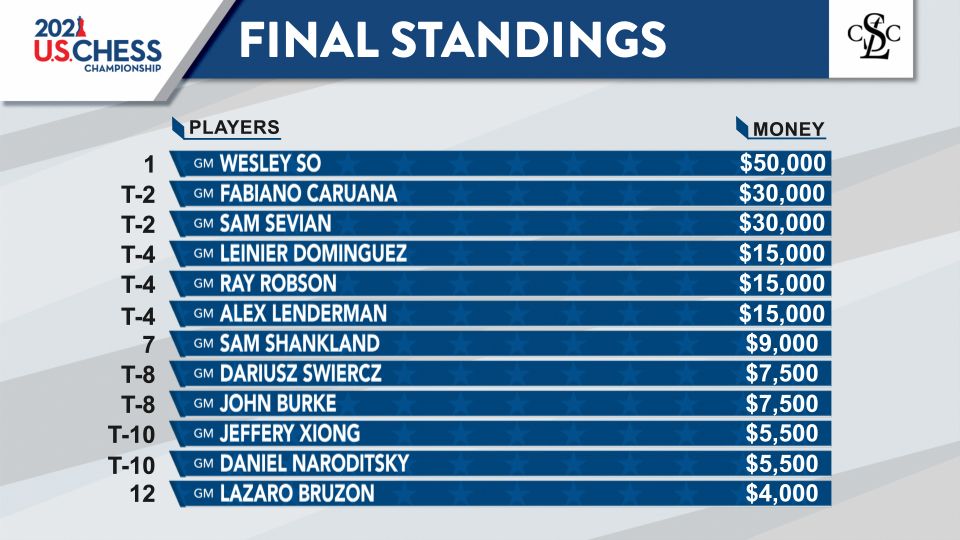 It was the first time since Gata Kamsky in 2014 that a player had managed to defend the US Championship title.

Wesley got to open his post-game interview, “First of all I’d like to thank the Lord Jesus — all glory to him for giving me the victory,” and he wasn’t taking anything for granted, noting that the event is going to get even tougher in 2022, when Levon Aronian likely joins the line-up. 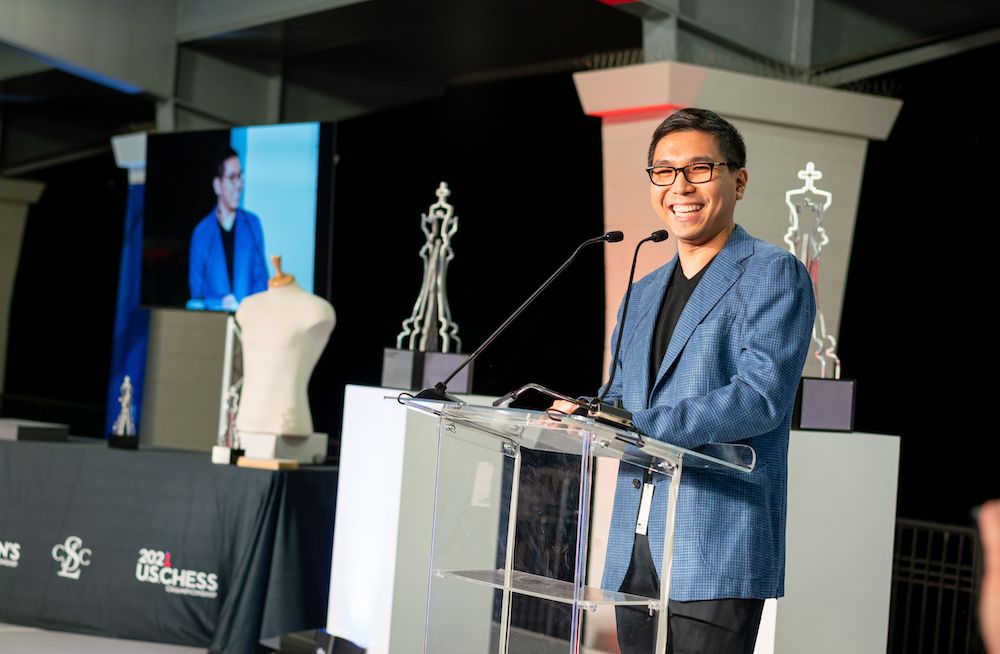 All that remained for the 2021 US Chess Championship was the Closing Ceremony, featuring speeches by Wesley and also Women’s Champion Carissa Yip. Wesley, who called it “surreal” to be standing there since he doesn’t win too many events, summed up:

I feel like I didn’t play the best chess in the tournament and I’m not sure my win here is deserved, but I’ll take any win, any time of day! 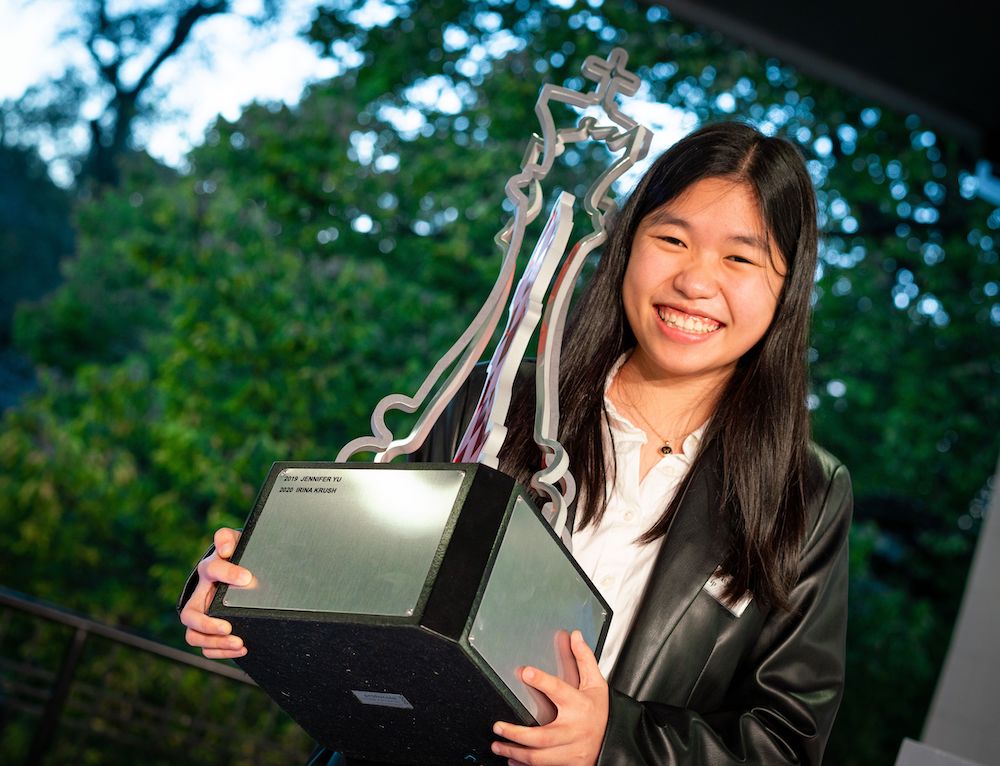 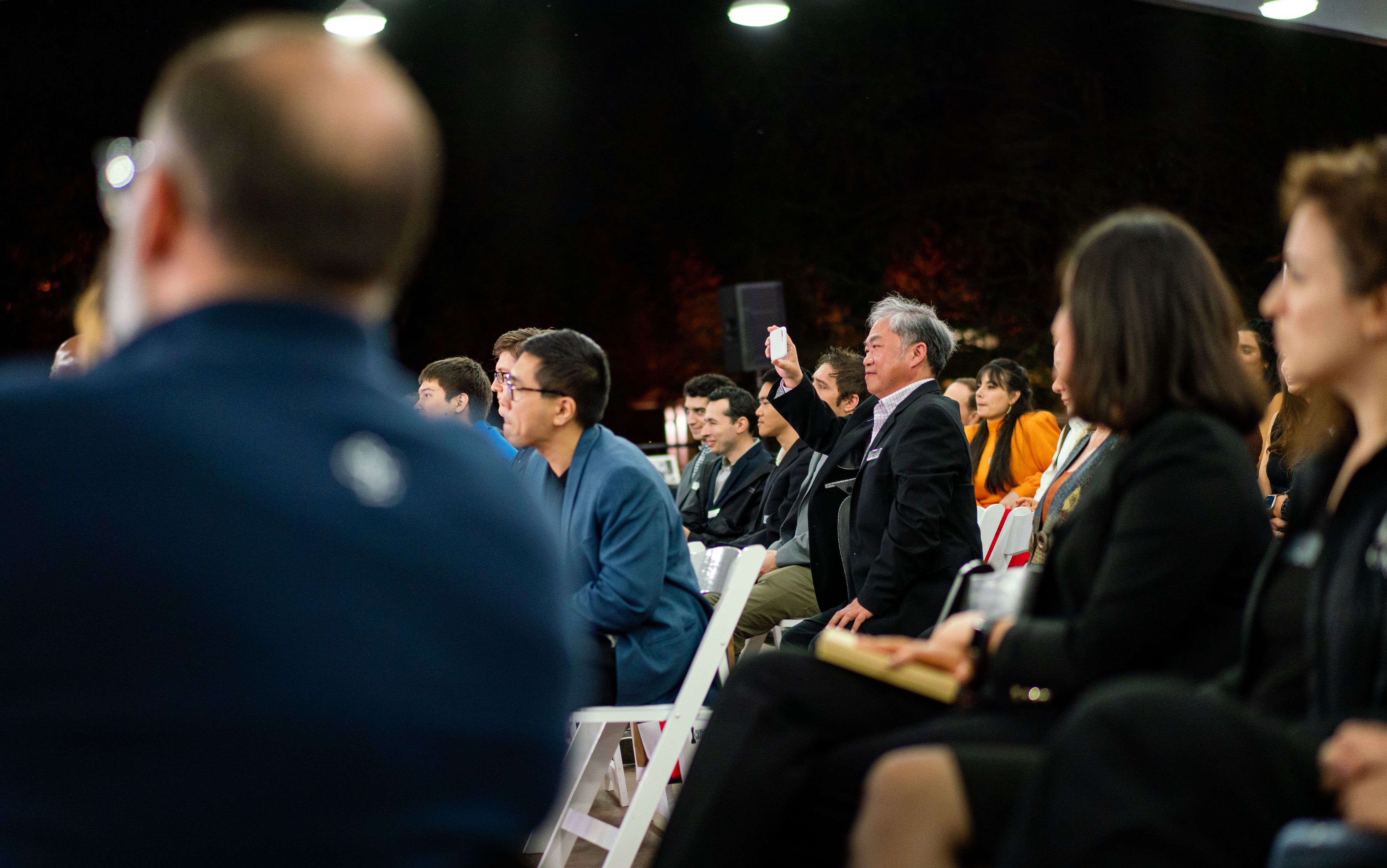 So that’s all for the 2021 US Championships. The next absolutely top event on the chess calendar is expected to be the Grand Swiss in Riga, Latvia in one week’s time, though it’s currently in serious doubt due to a lockdown in Latvia.