Wesley So needed just two games on Monday to clinch a 4.5:1.5 victory and take the Chess.com Global Championship title and $200,000. 18-year-old Indian prodigy Nihal Sarin won $100,000, by far the biggest prize of his career so far, but despite having some chances in the penultimate game he was unable to land any blows against the 3-time US Champion. 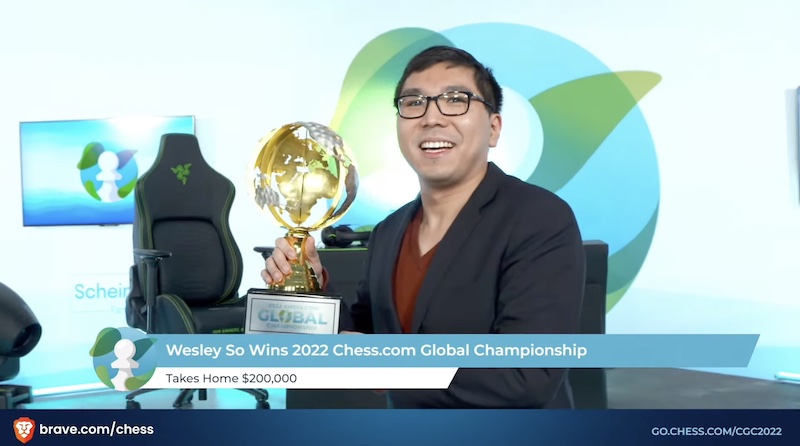 Nihal Sarin beat Rauf Mamedov, Vladimir Kramnik, Ding Liren, Sam Sevian and Anish Giri on the way to the Chess.com Global Championship final, but Wesley So was finally the one star name he couldn’t overcome.

Wesley himself had beaten Denis Lazavik, Vasyl Ivanchuk, Jeffery Xiong, Dmitry Andreikin and Hikaru Nakamura, and especially in Toronto had only really looked vulnerable in the very first game, when he was on the verge of defeat against Dmitry Andreikin and then missed mate-in-2.

Going into the 2nd day of the final the score was 3:1 in Wesley’s favour, so that he knew he needed three draws, or a win and a draw, to seal the match. He admitted the proximity of his goal made him “very nervous”, which helped Nihal Sarin’s offbeat opening become a success.

It was understandable Wesley didn’t want to risk the tricky tactics after 13.d5!, but what Anish Giri called the “incredibly timid” 13.Rc1?! could have ended badly. Wesley pointed out that after 13…a5! 14.b5 his opponent could have continued with 14…a4!, leaving the b5-pawn in big trouble.

Instead after 14…Nd5?! 15.a4! Wesley had stabilised, particularly when Nihal chose 15…h6 instead of applying some last pressure with 15…Nb4. Fabiano Caruana was soon predicting a peaceful end, with a comparison few could have expected…

…and there wasn’t long to wait until all the material had been vacuumed off the board.

That meant Wesley was just one win away from the title, and he got a big boost when Nihal went for a pawn sacrifice line of the London that he’d played to beat Anish Giri in the semi-final. Anish took with the pawn on d4, but Wesley was ready to take with the queen.

It’s a very famous line. I definitely came prepared. I didn’t expect him to repeat that line, because it’s very forcing. I thought he might go for the London with Bf4 anyway, but it was a nice game.

Wesley revealed the offer to give back the pawn with 14…Bb5! was something he’d looked at in advance, while the move that seemed to end Nihal’s chances was the retreat 18.Ne3?!, when 18.Nd6 might still have posed problems for Wesley.

Soon everything was going Wesley’s way, until 31.h6? was a final blunder in an already more or less hopeless position.

He played on a while, either hoping to force a draw by perpetual check or simply taking some time to come to terms with defeat. Soon it was over, however, and Wesley So could lift the trophy!

Up next for him is a trip to San Francisco, where he’ll be playing in the final event of the $1.6 million 2022 Meltwater Champions Chess Tour. Magnus Carlsen, Praggnanandhaa and Anish Giri will join him in the San Francisco Ferry Building, while Jan-Krzysztof Duda, Shakhriyar Mamedyarov, Liem Le and Arjun Erigaisi will be joining online.

Read more about that event that starts in one week’s time on Monday, November 14th.