So vs. Carlsen as Opera Euro Rapid starts Saturday

World Chess Champion Magnus Carlsen takes on US Champion Wesley So when the Opera Euro Rapid kicks off at 17:00 CET on Saturday. The 3rd event on the $1.5 million Meltwater Champions Chess Tour features 16 players, who will be reduced to just 8 after a cut-throat 3-day preliminary stage. Tour leader Teimour Radjabov will be joined by the likes of Hikaru Nakamura, Ding Liren and Daniil Dubov, with Tata Steel Masters runner-up Anish Giri already eyeing a Valentine’s Day date with Magnus. 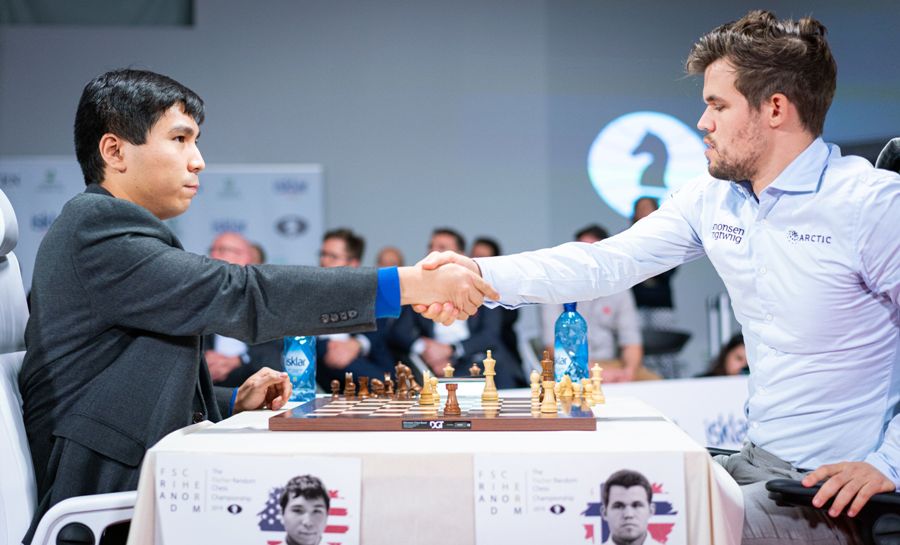 The full pairings are out for the Opera Euro Rapid preliminary stage, which features five rounds of 15+10 rapid chess played on chess24 each day as the players face all their rivals once.

The event begins less than a week after the end of the Tata Steel Chess Masters, so for some of the players it’s a chance for redemption!

World Champion Magnus Carlsen called his Wijk aan Zee performance “shameful”, while Candidates Tournament leader Maxime Vachier-Lagrave dropped 10 places on the world rankings from 5th to 15th after a disastrous event. Polish no. 1 Jan-Krzysztof Duda failed to win a game, while a great event for Dutch no. 1 Anish Giri ended bitterly in a playoff loss to another Dutch star. Still – a new week, a new goal!

The 3rd event on the tour features the two previous winners, Wesley So (Skilling Open) and Teimour Radjabov (Airthings Masters), while some of the biggest names such as world no. 3 Ding Liren, 3-time World Blitz Champion Alexander Grischuk and Indian Olympiad Captain Vidit Gujrathi are aiming to reach the knockout stages for the first time on this year's tour. 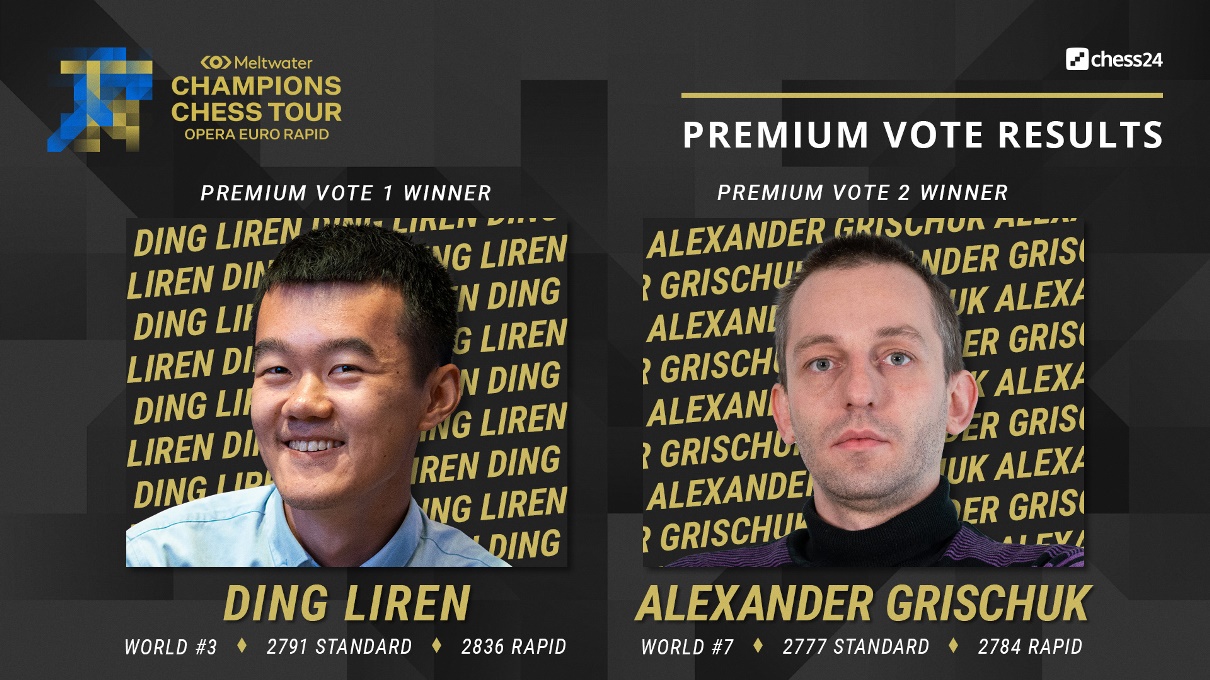 Ding Liren & Grischuk are back by popular demand, though both would have been high on the list for wild card invites!

In fact of the 19 players to compete in the tour so far just 9 have made it to the knockout matches and earned any tour points. 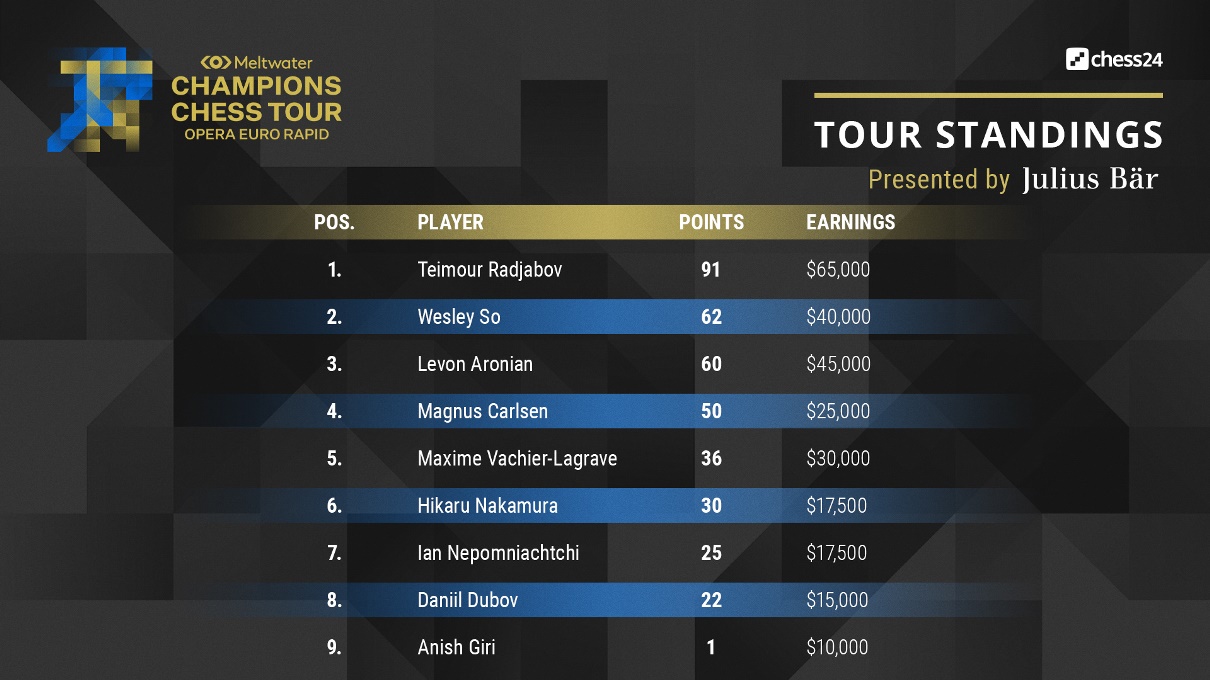 Three players will be making their debut on the Meltwater Champions Chess Tour: 2018 US Champion Sam Shankland, Matthias Bluebaum, now the clear German no. 1 after Alexander Donchenko’s struggles in Wijk aan Zee, and Leinier Dominguez, a former World Blitz Champion and the current world no. 14 in classical chess and world no. 6 in blitz.

Cuban-born Dominguez now represents the USA, and will start his campaign against blitz world no. 1 and Magnus Carlsen Chess Tour runner-up Hikaru Nakamura.

The strength of the line-up is clear when we can still add the names of Russian no. 1 Ian Nepomniachtchi, Armenian no. 1 Levon Aronian and 24-year-old Russian Daniil Dubov, who famously beat Magnus Carlsen over a 2-day match in the Airthings Masters quarterfinals. There’s a lot at stake, not just the $30,000 top prize… 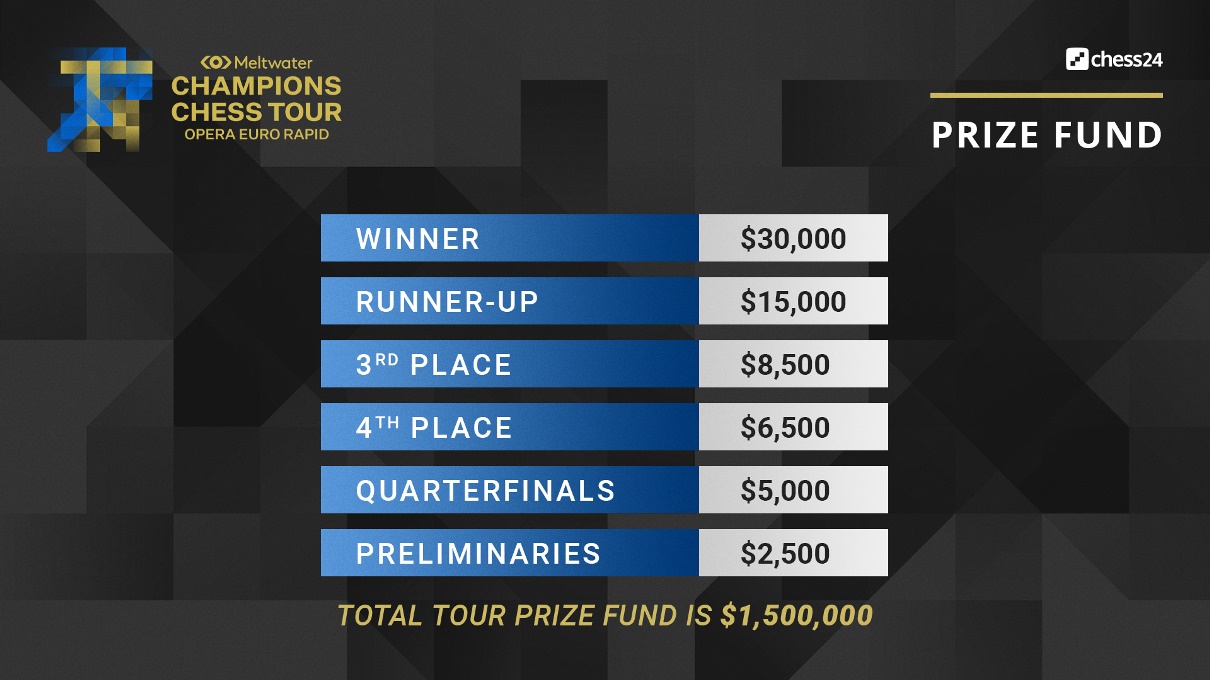 …but that the top 8 in the tour standings at the end of the tournament will qualify automatically for the next event on the Tour, a $200,000 Major running from March 13-21. 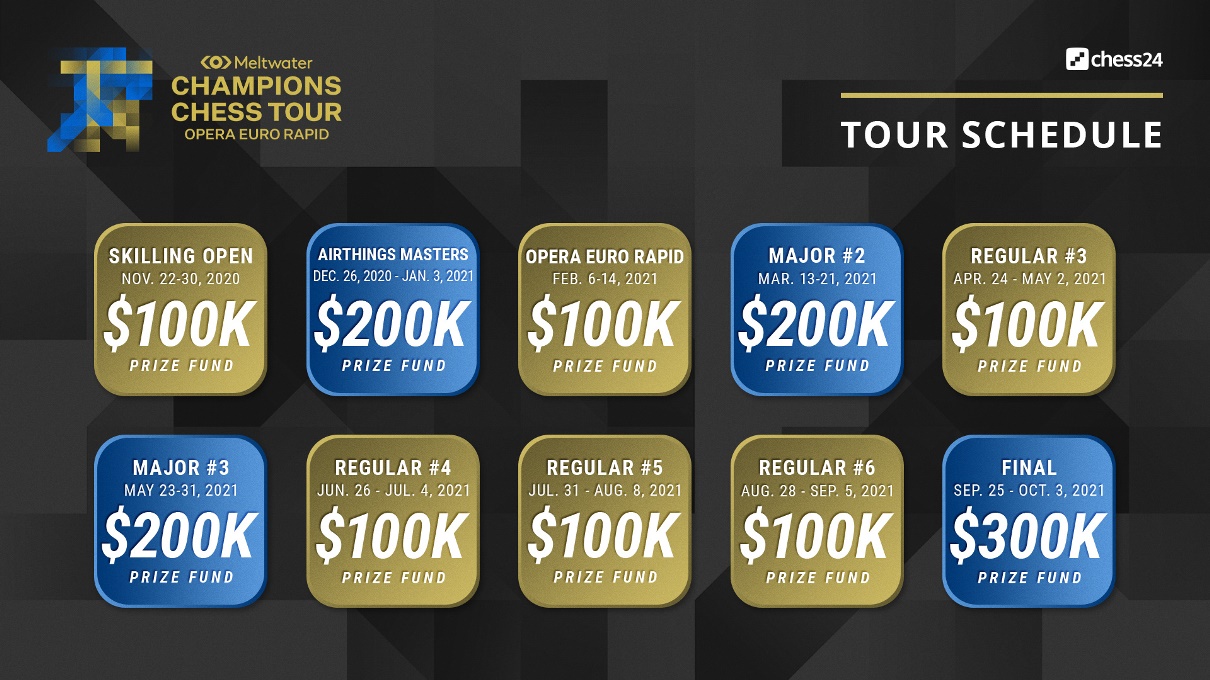 It’s going to be a thrilling battle, and once again you can enjoy it with live commentary in multiple languages and streams.

For instance, in English there’s the studio broadcast from Oslo with Jovanka Houska, Kaja Snare and David Howell aimed at the more casual chess fan, while Peter Leko and Tania Sachdev anchor the more traditional chess24 stream mixing fun and enthusiasm with some serious chess insights. Simon Williams will be hosting a show featuring a number of different Chessable authors. 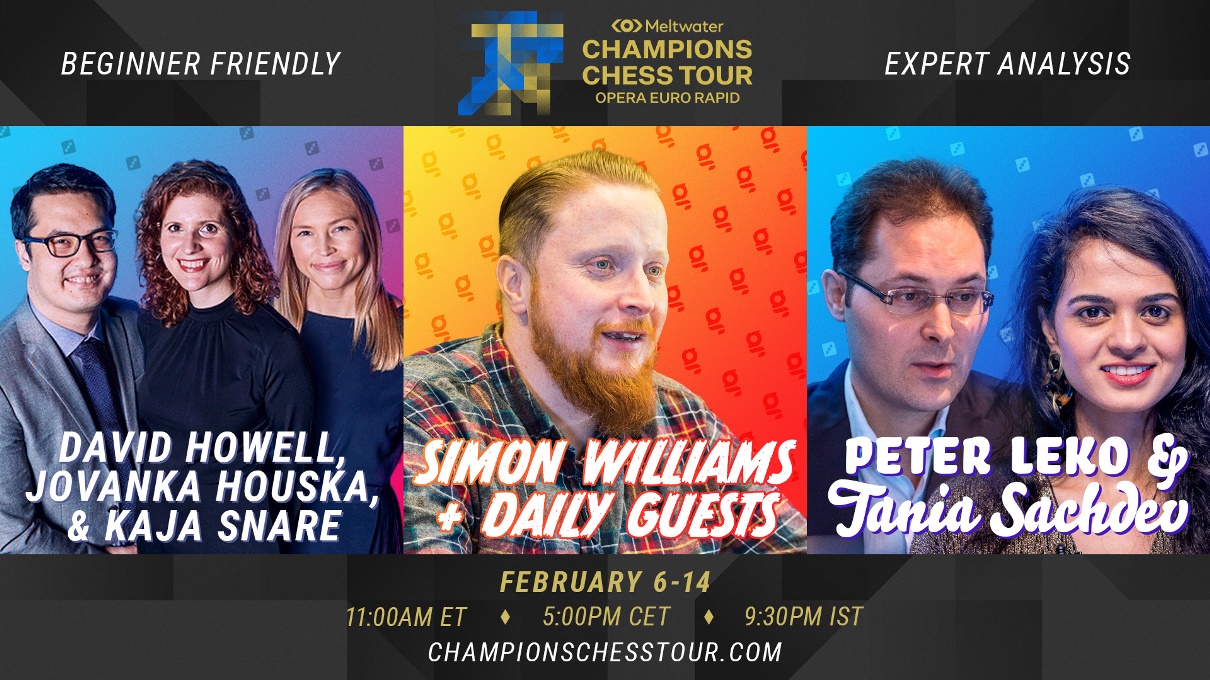 The action kicks off on Saturday February 6th - follow it all LIVE here on chess24 from 17:00 CET!