Wesley So storms to victory in Paris Rapid & Blitz

Wesley So won 4 of his last 5 games as he clinched the Paris Rapid & Blitz with a round to spare and finished a full 3 points clear of Ian Nepomniachtchi in 2nd place. Wesley commented “today was just my day” after he scored 7/9, beating Alireza Firouzja’s 6.5/9 the day before and clinching first place in the blitz as well as the overall prize. Maxime Vachier-Lagrave and Alireza Firouzja scored an underwhelming 50% on the final day, but shared 3rd place. Vladimir Kramnik won his last two games, but couldn’t avoid finishing last. 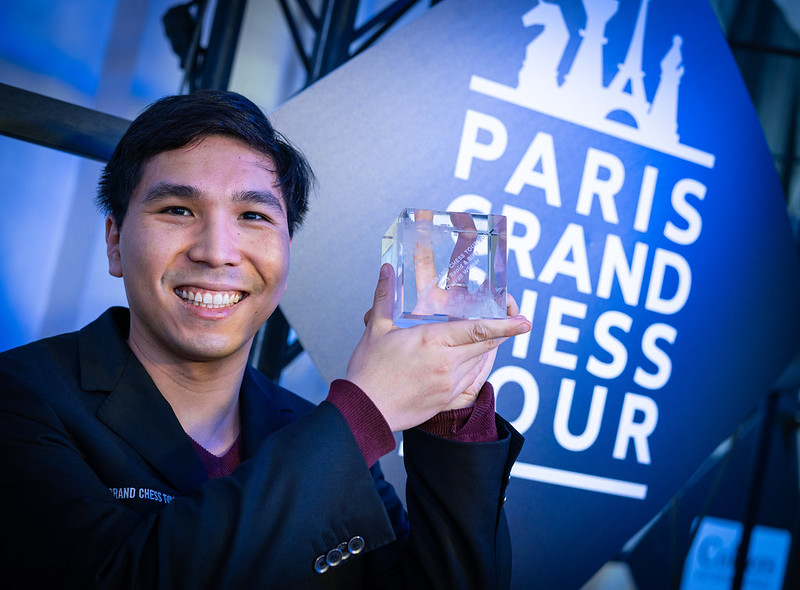 Wesley So was ultimately in a class of his own | photo: Lennart Ootes, official website

You can replay all the games from the Paris Rapid & Blitz using the selector below.

Wesley So went into the final day of the Paris Rapid & Blitz with a half-point lead over Ian Nepomniachtchi, and he never gave up that lead. Both players drew their first two games, before Wesley took a 1-point lead by smoothly outplaying Maxime Vachier-Lagrave in Round 12. World Championship Challenger Ian Nepomniachtchi cut the lead back to half a point again in the next round however, by grinding out a win against the same opponent, MVL. 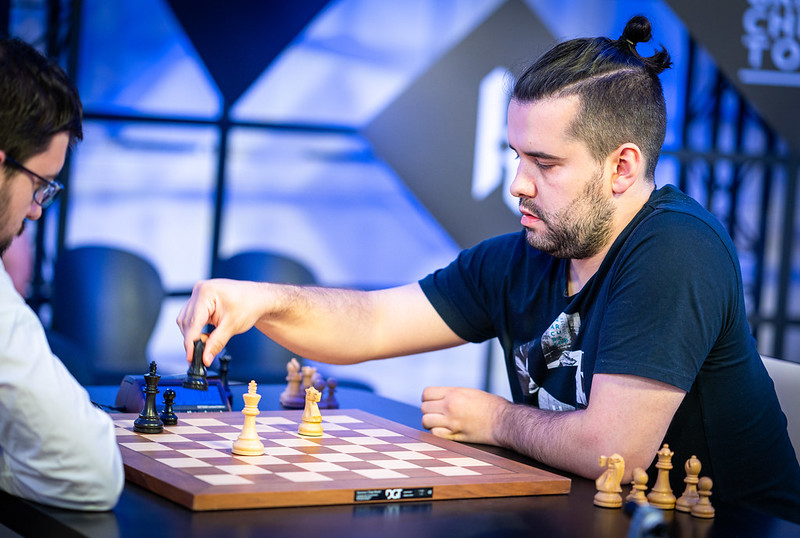 After an intense knight ending, Nepo went for 63…Ng4+! 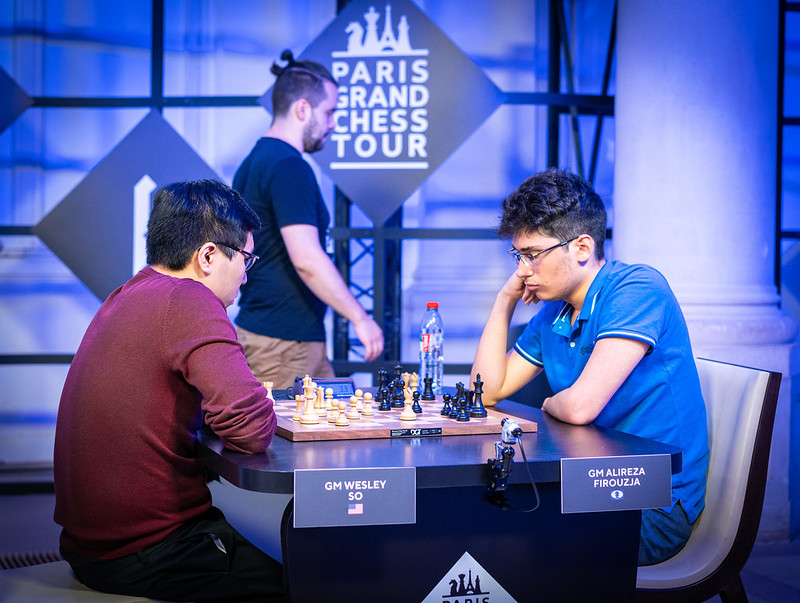 Wesley So made it 2/2 in blitz against Firouzja | photo: Lennart Ootes, official website

Both players won fine games in Round 14, before a blunder by Vladimir Kramnik allowed Wesley to regain a 1-point lead in Round 15. Round 16 saw the lead grow to 1.5 points, after Nepo drew quickly against Kramnik while Wesley So beat Alireza Firouzja for a 2nd day in a row. 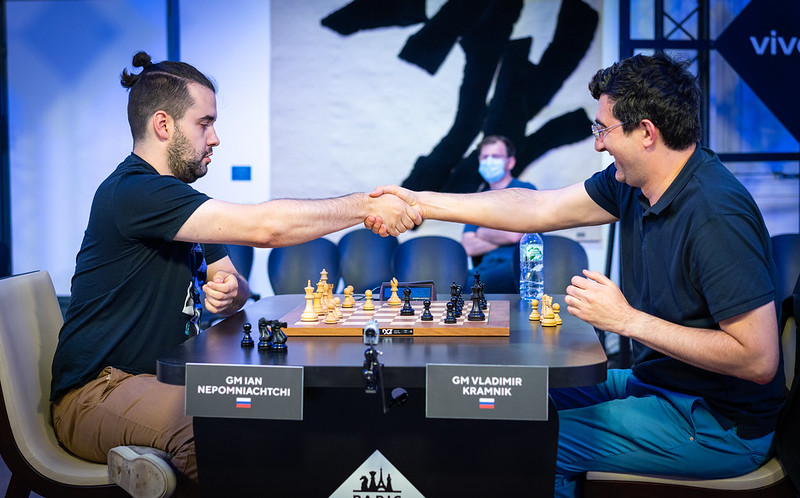 The position was equal until 28…Qh6?

Instead of defending the d-pawn directly, Alireza was relying on the white knight being pinned to the queen on d2, but 29.Qa2+ got out of that pin with check, and it was time to resign. The problem isn’t so much losing the d3-pawn as that the pinned e5-knight will also fall.

That left Wesley So leading by 1.5 points with just 2 rounds to go, and a lightning fast 14-move draw against Richard Rapport heaped pressure on Ian Nepomniachtchi, who had to beat Firouzja on demand, with the black pieces. This time, however, Firouzja was merciless as he kept an edge the whole game and was able to clinch victory with a simple tactical blow.

That meant Nepomniachtchi-So in the final round was less of a showdown than a formality, but to Nepo’s credit he played for a win, at one point rejecting an offer to repeat moves for a draw. As so often against Wesley, aggression backfired, however, with Wesley winning in impressive style to cap a wonderful performance. 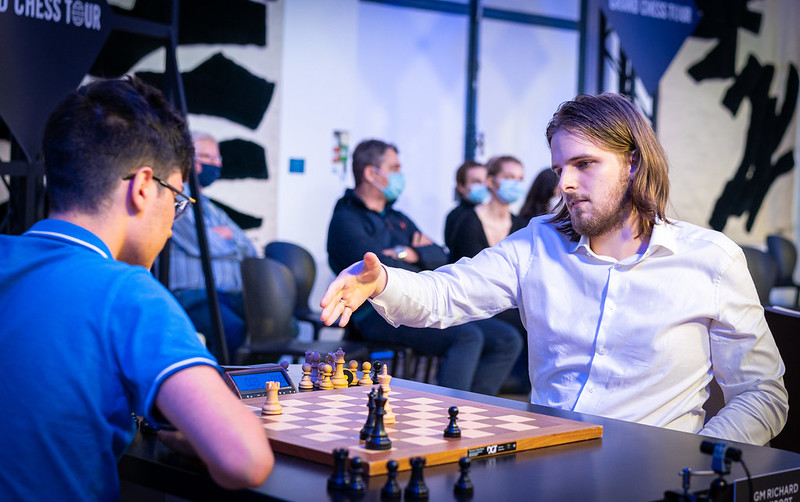 No-one came close to him on the final day, and in fact it was Richard Rapport, with 3 wins and just 1 loss, who was the 2nd highest scorer.

Wesley was the clear overall top scorer for the blitz, though Firouzja scored a remarkable 10 wins in 18 games.

And of course Wesley was the overall winner of the event!

He talked afterwards about his success:

I’m just very happy right now — it’s incredible! I never expected to win, and if I can have a few words I’d like to thank many people — and I’m sure I’ll miss a lot of names — but first I’d like to thank the Lord Jesus for letting me win. I think today I scored +5, 7/9, which never really happened before. Usually in past events I finished in the middle of the table in Grand Chess Tour events, so this is very pleasing, totally unexpected.

It’s fair to say chess fans were less surprised to see Wesley perform so well, particularly after his success on the Meltwater Champions Chess Tour. He’ll next be in action on Saturday June 26th, when he attempts to win a 3rd stage, the Goldmoney Asian Rapid, after narrowly missing out to Magnus Carlsen in the final of the FTX Crypto Cup. Levon Aronian, Alireza Firouzja and Peter Svidler also follow Paris by playing in the online event on chess24. 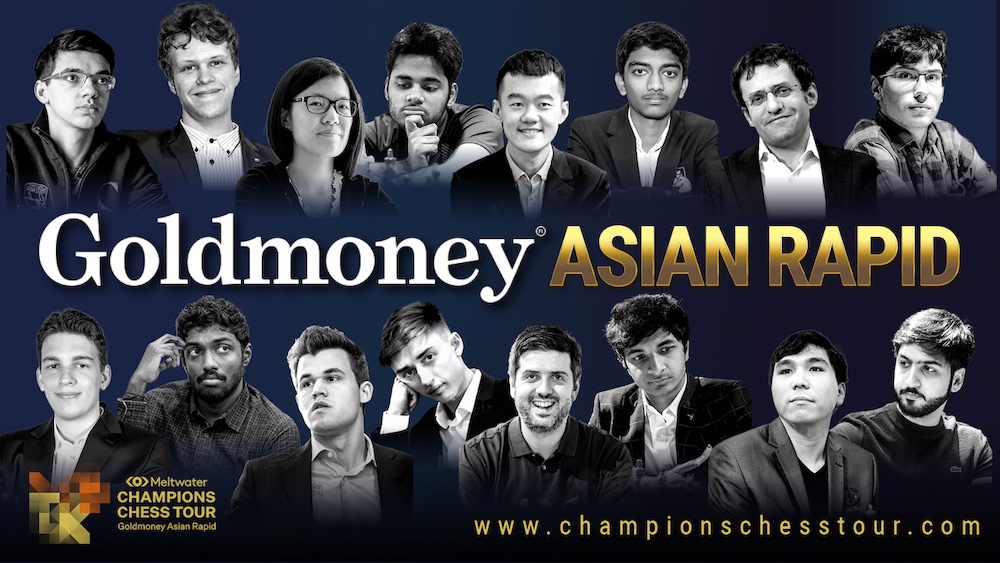 Before the blitz began, the player it was most intriguing to see in action was Vladimir Kramnik. A win over Peter Svidler in Round 2 suggested we might get the kind of show we’re used to from the 14th World Chess Champion, but he failed to win in the next 14 games, which included some painful near misses. 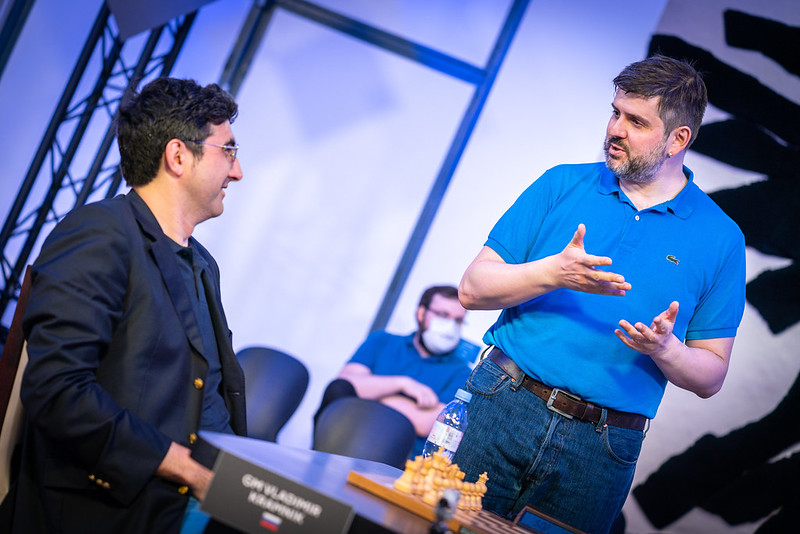 Vladimir Kramnik and Peter Svidler were the "veterans" of the field | photo: Lennart Ootes, official website

36…Ne2! and Kramnik would be in complete control, but after 36…Rd8? 37.Ra3! the f3-pawn was under attack and Black’s clamp on the position had gone. Alireza was soon on top, and the youngster, who has at times shown weakness in the endgame in Paris, played brilliantly to pick up a full point.

Vladimir finally ended on a high with wins over fellow strugglers Teimour Radjabov and Fabiano Caruana, but the late rally couldn’t disguise a disappointing performance from Vladimir. He’d finished in last place and failed to have much fun. His fellow 45-year-old Peter Svidler also suffered on the final day to drop down to 7th place, while MVL and Firouzja held on for 3rd.

Garry Kasparov will be the next veteran to try his hand at blitz, in the Croatia Grand Chess Tour, starting July 7th, but before that we have the Goldmoney Asian Rapid starting Saturday!