21-year-old Filipino Wesley So has won the Millionaire Open final in Las Vegas to claim the $100,000 first prize. His opponent in the last match was 19-year-old US player and Webster University teammate Ray Robson. After a quiet draw with Black in the first game So managed to apply pressure from the off in the second thanks to an opening idea that gave him a winning position after only 13 moves. 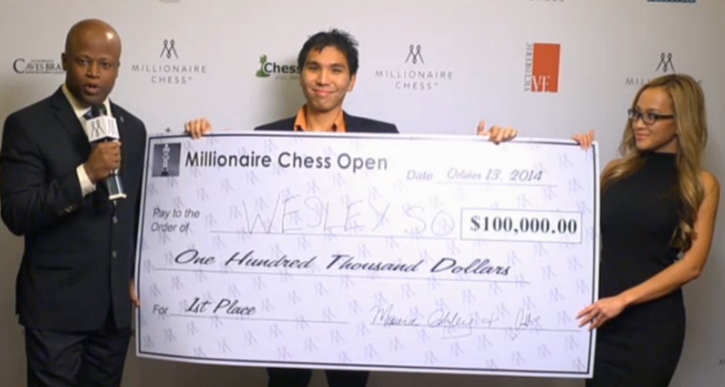 The winner with his huge cheque – both in size and value! | screenshot: live broadcast

Everything turned on the second 25-minute rapid game of the $150,000 final on Millionaire Monday:

1. d4 ♘f6 2. c4 g6 3. g3 c6 4. ♗g2 d5 5. cxd5 cxd5 6. ♘f3 ♗g7 7. ♘c3 ♘e4 With this move order, delaying castling, Black hopes to exploit the early development of the white knight in order to exchange it, and therefore simplify the position. This approach had certainly been successful so far, but So came into this game with an interesting idea that's going to be the talk of the town. 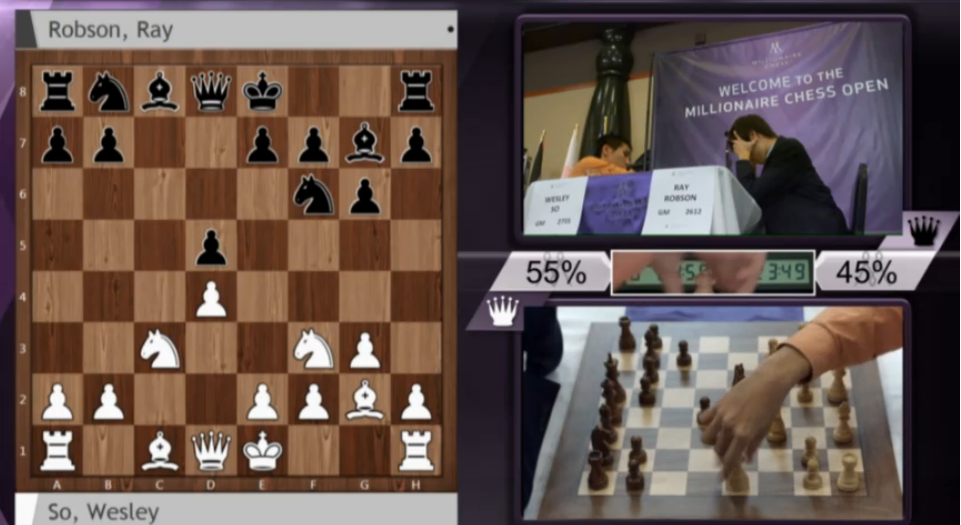 The most profitable preparation of So's career and no doubt his life: 8.Qa4! | screenshot: live broadcast

8. ♕a4+! Emphasising the one real drawback of Ne4 - the black king remained in the centre!

8. ♘e5 were the normal moves, which hadn't managed to achieve anything special for White.

8... ♘c6 9. ♘e5 White responds symmetrically, although of course with the queen on a4 the additional pressure on c6 gives him the initiative.

9... ♘xc3 10. bxc3 ♗d7? This move is an admission that something has gone wrong. Robson had two options: the active

11. ♘xd7 ♕xd7 12. ♖b1 b6? Robson spent a lot of time thinking and thinking but ultimately failed to find a way to put up resistance. 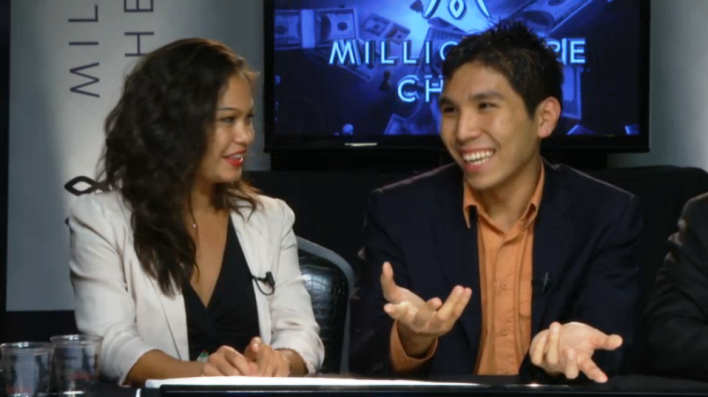 After the game Wesley So told Arianne Caoili that he'd only registered at the last moment for the tournament since it began on his 21st birthday and after a previous loss he'd promised himself never to play on his birthday again, never mind play two games as he had to in Las Vegas! So also noted it was tough for him to play Ray Robson as his main preparation for the tournament had been playing blitz against his teammate. | screenshot: live broadcast

Despite the defeat Ray Robson shouldn’t be too sad, since he took home a whopping prize of $50,000 and had also come within an inch of defeat in the semifinal against the formidable Chinese player Yu Yangyi, who suffered an incredible miss in the following position:

Yu Yangyi, with White, has completely outplayed Robson. He could now win with a simple combination: 32.Rxf5+! Qxf5 33.Qxg8+ Kxg8 34.Nxe7 followed by Nxf5, which would have forced Robson to resign. However, the Chinese player failed to finish off the game and actually ended up losing! Without this miracle – not Ray’s first of the tournament – it’s unlikely he would have made the final. You can replay the whole of that very tough loss for Yu Yangyi with computer analysis here. 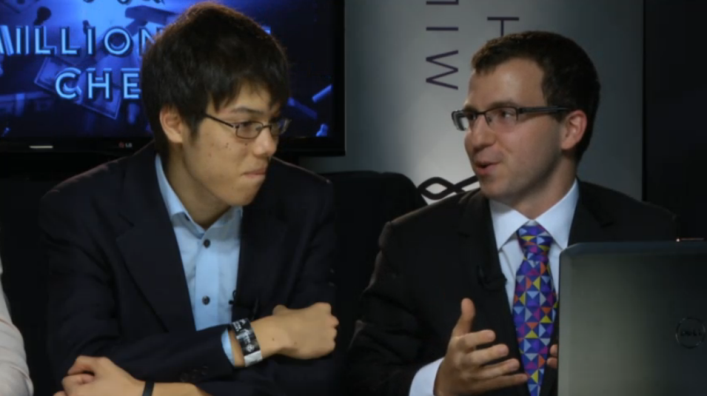 Ray Robson (left) was struggling to see the $50,000 positives in the immediate aftermath when he was interviewed by Robert Hess - who in the excitement of the moment as Robson escaped against Yu Yangyi had said that Ray could survive a parachute jump without a parachute! | screenshot: live broadcast

So after a mere five days Millionaire Chess is over, having distributed a massive $1,000,000 in prizes. You can replay all the games on our live broadcast page and see more information on the official website.