The Philippines born US star Wesley So has won his second consecutive Leon Masters after needing tiebreaks to beat Spanish no. 1 Paco Vallejo in the final. Paco was the dominant force in the rapid games, but So demonstrated his defensive gifts again and again to take the match to blitz, where he overcame his rival. Wesley didn't only win the tournament but also won over the public with his good humour and entertaining interventions in the press conferences. 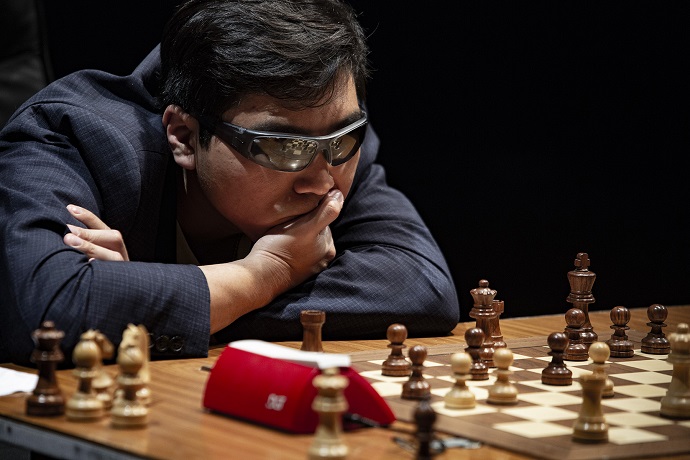 Wesley So showed great defensive ability and made no mistake when given a chance | photo: Raúl Martínez

You can play through all the Leon Masters games using the selector below:

And here's a glimpse of the last day's action:

The final got off to a fierce start, as Paco Vallejo demonstrated excellent opening preparation and had his opponent in trouble. Wesley So sacrificed a piece in the opening, but when he failed to find the correct continuation he simply ended up in a lost position.

So should have played 17...e5! in order to follow up with Bxg4 and get good compensation for the sacrificed knight. Instead he opted for 17...Qf6? when after 18.Nde2! e5 19.Bg5 Qf3 20.0-0-0 his position was already desperate. Despite getting low on time at the end Paco made no mistake in converting his advantage, and once again Wesley had lost the first game of a match in Leon! He commented afterwards:

I thought I would learn my lesson after losing the first game in the previous match, but apparently not! The only difference is I lost with Black...

The first game, from both sides | photo: Raúl Martínez

So decided to go all-out in the second game and sacrificed a central pawn almost before getting out of the opening. Paco found some good replies and Wesley's compensation was murky at best:

Although the white pieces are somewhat more active it seems insufficient compensation for the loss of the e-pawn. Paco committed an inaccuracy, however, and So was able to equalise the material until a little later on the decisive moment arrived.

So is threatening the black bishop, which could have been defended with 28...Qc7, when the game would probably end in a draw. Paco missed his opponent's idea, though, and played 28...Rfe8?, which lost on the spot to 29.Rd4! Qc7 30.Rde4. The pin is lethal, and shortly afterwards Vallejo lost the bishop and the game.

The loneliness of a chess player | photo: Raúl Martínez

The third and fourth games of rapid chess followed the same script, with Vallejo pressing and Wesley So defending. Although the positions were promising for the Spanish no. 1, including a healthy extra pawn in Game 4, he could never find a clear way to convert his advantage and excellent defence allowed Wesley So to take the match to tiebreaks. Actually it wasn't purely about the chess, since Paco confessed the reason he offered a draw in what was still a better position in Game 4: "I had 10 seconds and I needed to go to the toilet!"

The first game of blitz was again similar, up to a point. A good opening idea from Paco Vallejo left Wesley So in an uncomfortable position.

All the white pieces are better than their black counterparts!

With the precise 25.Qc2! White could have prevented the black queen from being transferred to the centre, since 25...Qe5 would be met by 26.Ng3. In the game 25.b4!? followed, and the black queen soon found itself on e6, from where it controlled the whole board. Just when the game seemed to be heading for a draw Paco forgot about a pawn and Wesley So converted his advantage into a crucial win.

The task facing Vallejo was an uneviable one - there aren't many players who can boast of beating Wesley So on demand with the black pieces! Nevertheless, the opening went well and Paco reached a position with plenty of play:

In this position the plan of advancing the h-pawn to create weaknesses around the white king is probably the most promising, but Paco couldn't resist the beautiful 28...Nh3+. Black would love White to take the knight, but instead So played the calm 29.Kh1!, gently requesting that the knight retreat. That didn't happen, though, since Paco committed the decisive mistake 29...Qh4?. Wesley replied 30.f4! and shortly afterwards won a piece and the tournament - Wesley offered a draw at the end in a won position, since that was all he needed to confirm tournament victory.

In the post-game press conference Wesley commented that it was unusual for him to defend his title at a tournament, and summed up:

Paco was happy to have played better than the day before and was gracious in defeat, commenting of the decisive blitz games, "He played faster, and in blitz playing faster is playing better!" You can watch that press conference, and the whole day's action, below:

So that's all for the 31st edition of the Leon Masters, which provided three dramatic matches and saw the elite debut for 12-year-old Praggnanandhaa. It was a rocky ride, but Wesley So was a deserving winner who once again demonstrated his strength in speed chess. He'll get a chance to do the same in just over a month, when he plays in the next Grand Chess Tour event, the St. Louis Rapid and Blitz. That runs from the 11-15 August, and will be followed shortly afterwards by the Sinquefield Cup.

You can check out all the upcoming top events in our 2018 Chess Calendar.