Wei Yi crushed Vassily Ivanchuk’s Sicilian on his third attempt to take their match to tiebreaks, but Vassily bounced straight back to win both blitz games and score a 5:3 victory. There was the same scoreline in the other match, where Adhiban and Jorden van Foreest traded four wins in classical chess before the young Dutch star finally emerged triumphant in the blitz playoff. Roeland Pruijssers led the open after 7 rounds, but is now joined by three players in knockout. 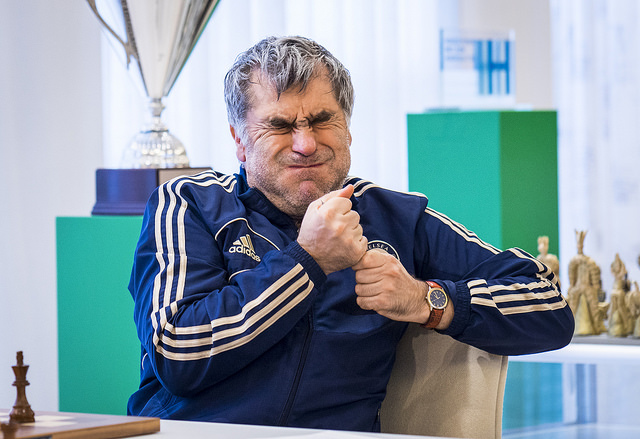 The darkest moment is just before the dawn! Ivanchuk's Sicilian is dismantled by a trademark Wei Yi attack, but he would go on to win the tiebreaks and match | photo: Lennart Ootes, official website

When we last reported on Hoogeveen at the midway point Vassily Ivanchuk had taken the lead after a Wei Yi sacrifice proved to be fatally flawed. The young Chinese star had to search for a win, but in the following two games he was frustrated. You can replay all the games using the selector below:

Game 4 saw Ivanchuk play the Sicilian again, and Wei Yi sacrifice a pawn again, but just when he seemed to be ready to capitalise on a lead in development Vassily managed to confuse matters with 20…h3!?

That jab ultimately generated the weaknesses Ivanchuk needed to draw the heavy-piece ending that followed. 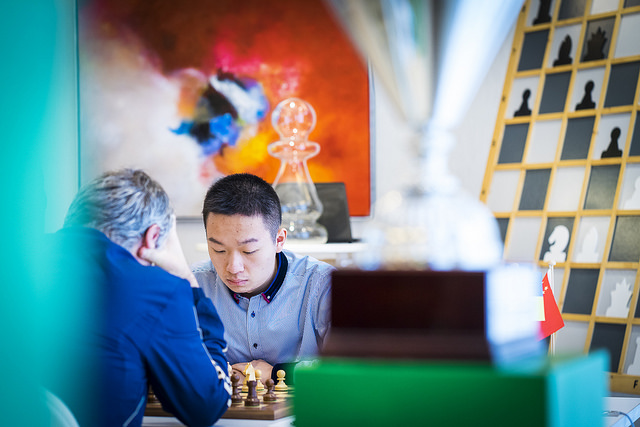 The enterprising chess continued in the next game, where Wei Yi unsurprisingly failed to resist the urge to sacrifice his queen when given a chance:

25.Bxc3! took 17 minutes and solved all White’s problems, but when the dust had cleared there was a simplified position where White’s queen was unable to make any progress against Wei Yi’s rook and knight. 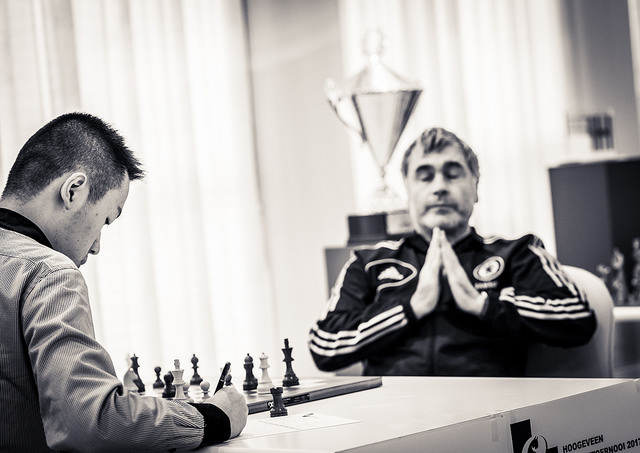 That meant it all came down to the last classical game, where Wei Yi had to win on demand with White. Another player might have decided not to tempt fate once more with the Sicilian, but Ivanchuk stuck to his guns. This time, though, he wasn’t able to tame the young lion and allowed a white e-pawn to get stabbed into the heart of his position on e6:

This was the moment afterwards when the players agreed Black might have put up more resistance with 22...Nf6. Ivanchuk said he stopped calculating after 23.Bxh6, but after 23…Nxd7! 24.exd7 Rf7 there’s no knockout blow and Black has hopes of consolidating. Ivanchuk commented:

How could I miss this? White may be slightly better, but it's still playable.

Wei Yi agreed, noting he was also in time trouble at this point. Instead, though, Ivanchuk played 22…h5 and was unable to prevent Wei Yi’s king going on a dance that eventually saw it break through in triumph on g5:

What followed were death throes, with the black queen and light-squared bishop completely out of play as White’s queen, bishop and rook finished off the game. 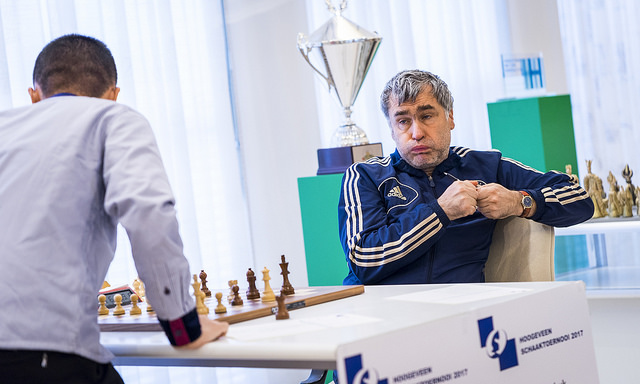 Defeat is tough to take, no matter how long you've been around | photo: Lennart Ootes, official website

The match wasn’t quite over, though, since a tie in the classical games was to be settled by two 3 minute plus 2-second increment blitz games. The momentum was with Wei Yi and he emerged a pawn up with Black from the opening of the first game. Then, however, his relative lack of prowess at blitz chess showed, with Ivanchuk applying pressure to win back the pawn and not relenting until he’d also won the game. 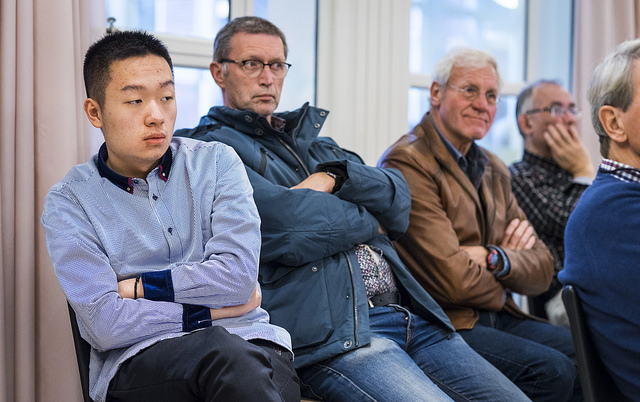 The return game witnessed a small local triumph for Wei Yi – he’d finally convinced Ivanchuk not to risk playing the Sicilian when he needed only a draw. A later dialogue:

Loek van Wely: It was nice to see Vassily play the Sicilian.

Ivanchuk: You asked me - I had no choice! (laughs) Only in blitz I allowed myself a Scandinavian.

The switch worked, as Wei Yi soon went astray and had to resign after 18…b5!

Perhaps Wei Yi had some lingering hopes in the 34 seconds it took Ivanchuk to play this move, but when it appeared on the board it was game over. There’s simply no way to save the knight on f4.

So the match ended with something of a whimper, but it will be remembered for the high quality display of sacrificial chess and defence we witnessed in the classical games.

The clash between Adhiban and Jorden van Foreest featured even more decisive games, but the quality wasn’t quite the same. In Game 4 Adhiban seemed to misremember a super-sharp opening line and was all but lost when he played 15...g4?!

After 16.dxe5! White is threatening simply to take on d8, a7 and g4 and leave Black down material with fatal weaknesses such as the f7-square. Adhiban tried to mix things up with 16…Bxf2+ 17.Rxf2 g3!? but Jorden simply emerged two pawns up and went on to win comfortably. 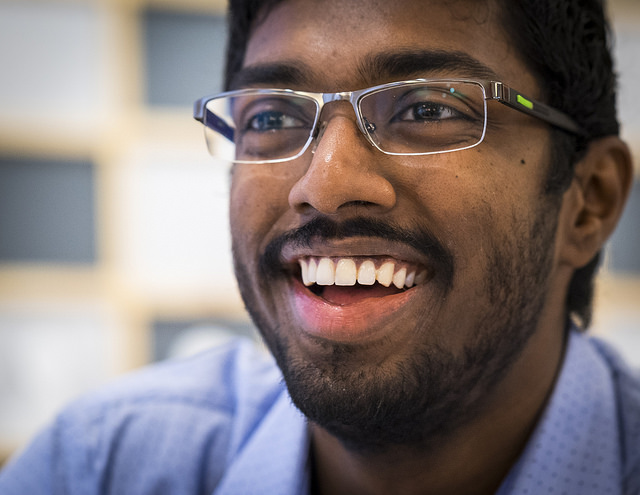 It's not easy to break Adhiban's spirit and he soon bounced back again | photo: Lennart Ootes, official website

In the very next game, though, Adhiban adopted a different approach and managed to win a quiet ending with a minimal advantage. The 6th classical game was only the second draw of the match, taking the encounter to blitz games. 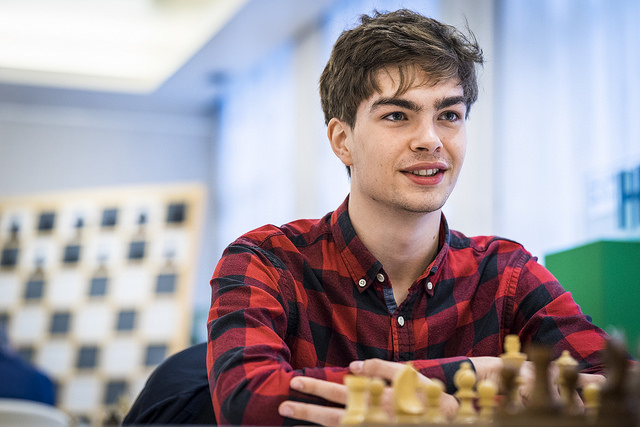 Jorden won the first with White more or less smoothly, which certainly couldn’t be said about the return game. Some wild play from Jorden allowed Adhiban to reach a completely won position: 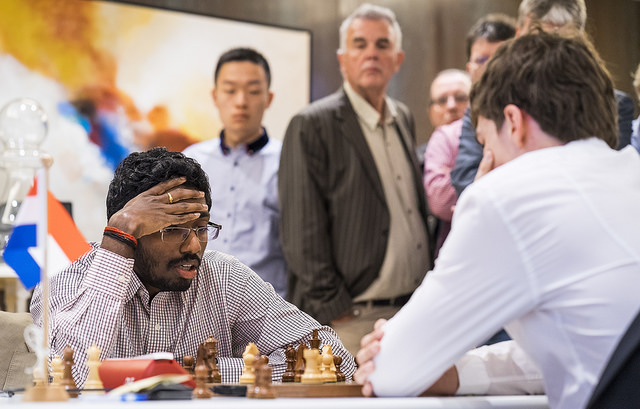 Although Jorden van Foreest and Loek van Wely are heading to Crete for the European Team Championship there’s still unfinished business in Hoogeveen. Roeland Pruijssers was the sole leader of the open with 6/7, but now he joins Dmitrij Kollars, Dinar Saduakossova and Thomas Beerdsen in a knockout finish that borrows something from Millionaire Chess. Unusually for matches, though, the players only play a single classical game (Pruijssers has the advantage of White) and then two 3+2 games if needed. For the other players the open continues as normal. 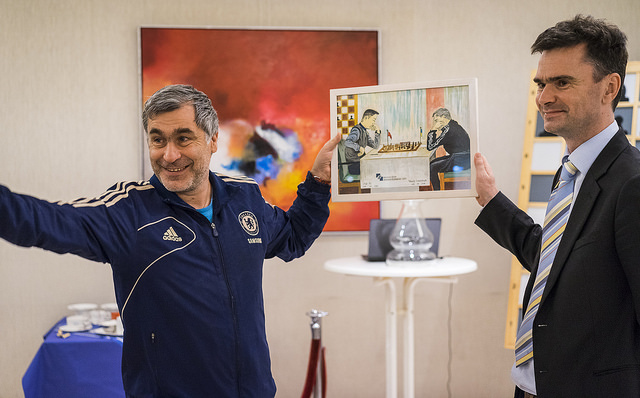 Vassily Ivanchuk with a momento of the match | photo: Lennart Ootes, official website

That’s not quite all. Wei Yi and Adhiban are playing each other in a two round rapid Basque Chess match, where they play two games simultaneously: