Only Wang Hao and 19-year-old Vietnamese player Tran Tuan Minh have a perfect 3/3 after the opening weekend of the HDBank Masters in Vietnam, with top seed Wei Yi in particular having a short but not always sweet tournament! He won with a simple trick on move 18 in Round 1, got crushed in 19 moves in Round 2 and won again in 13 moves in Round 3. Sandro Mareco and Lu Shanglei are among the other top seeds to have suffered painful losses. 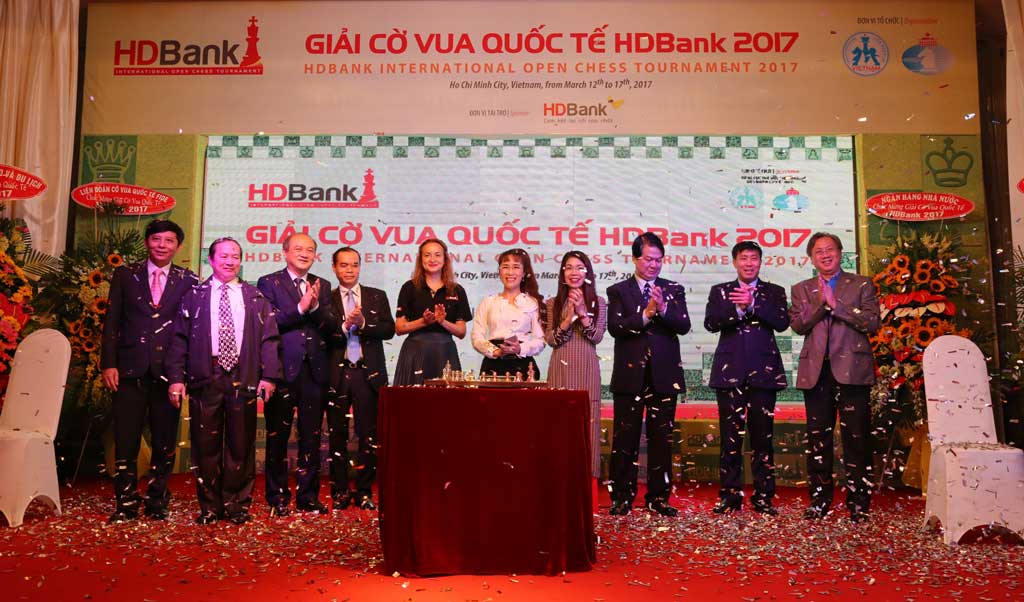 Former Women's World Champion Antoaneta Stefanova was among the guests of honour at the opening of the event | photo: vietnamchess.vn

The HDBank Masters can boast of being the world’s top chess tournament at this particular moment in time, with a field including three 2700+ participants among players from 25 countries. The schedule of the 9-round open is punishing, with three double rounds and no rest days, but there’s $45,000 up for grabs, with $13,000 for the winner. You can of course watch all the games live on chess24 with computer analysis (click a game to open it, or hover over a player’s name to see their results so far):

As the world’s top chess junior and the tournament’s top seed all eyes were always going to be on 17-year-old Wei Yi. The Chinese player had just won his last two games in the China-India match, but even for a young star it may have been tough to make the 3,000 km trip to Ho Chi Minh City (formerly Saigon) for the open tournament – as the whole Chinese team did.

If fatigue was an issue, though, the first game didn’t show it. 2392-rated Vietnamese GM Tu Hoang Thong took his life in his hands by playing the Sicilian against Wei Yi, and then made the “natural-looking” 17…Qa5??

You don’t need to be a chess prodigy to spot 18.Qg4!, forking the e4-knight and the now undefended c8-rook. 18…f5 19.Qxg6 was just the start of material losses for Black that ended in resignation in 31 moves, after both players blitzed out their remaining moves. 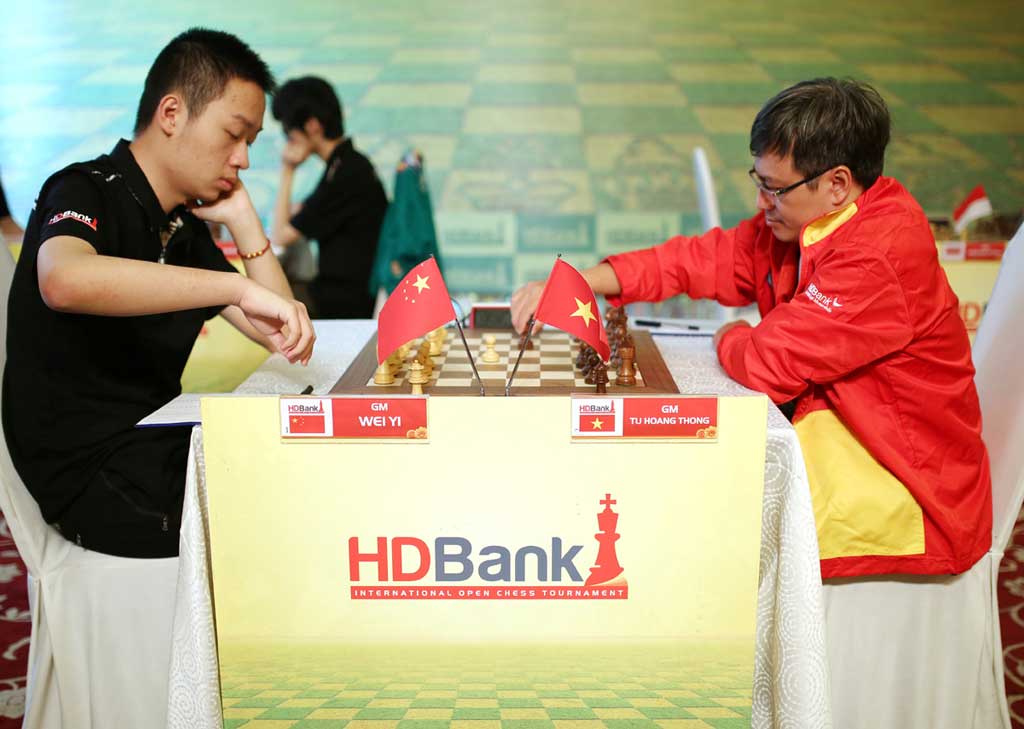 That was the prelude to disaster, though. Wei Yi has been criticised at times for playing too solidly with the black pieces for a player of his tactical prowess, but in Round 2 he was ruthlessly punished for reckless decisions. His game against 40-year-old Russian IM Viacheslav Diu featured the main line of the razor-sharp Anti-Moscow Variation of the Semi-Slav Defence. Then, on move 10, Wei Yi sank into thought before apparently beginning to improvise over the board. His 10th move was rare, his 11th a dubious novelty and 12…h5? was verging on the suicidal:

If the plan was to get his opponent “out of book” it succeeded, but Diu spent 17 minutes before detonating the position with 13.f4!, and Black is in a world of pain. Wei Yi seems to have decided his only remaining hope was to play fast but, although Diu’s clock did run down as he contemplated all the enticing options, the position was simply too good for White. The Chinese star conceded defeat after 19.Qg4:

Not a game that’s going to make it into Wei Yi’s Best Games collection!

That defeat saw Wei Yi paired against 2167-rated Candidate Master Le Huu Thai in the following round, and this time it was his opponent who proved unprepared in the opening. In the Four Knights Game, Le Huu Thai was busted by move 10 – following Schwarz-Fleissig from 1889! – with Wei Yi’s 11.Ng5! an improvement on that 19th century play. Black was already in a hopeless position before 12…g6:

13.Nxh7! provoked resignation, since 13…Kxh7 14.Qh5+! Kg8 15.Bxg6! will clearly end badly for Black. That took Wei Yi back to a respectable 2/3, and the good news for him is that only two players have managed to score a perfect 3/3 at the start of the event – Wang Hao and Tran Tuan Minh.

Wang Hao is a name that will surprise no-one. The 27-year-old may have disappeared from the supertournament circuit, but he remains a top player and outclassed his three lower-rated opponents. Oliver Dimakiling from the Philippines was putting up stiff resistance until he chose the unfortunate 39.Qd4? 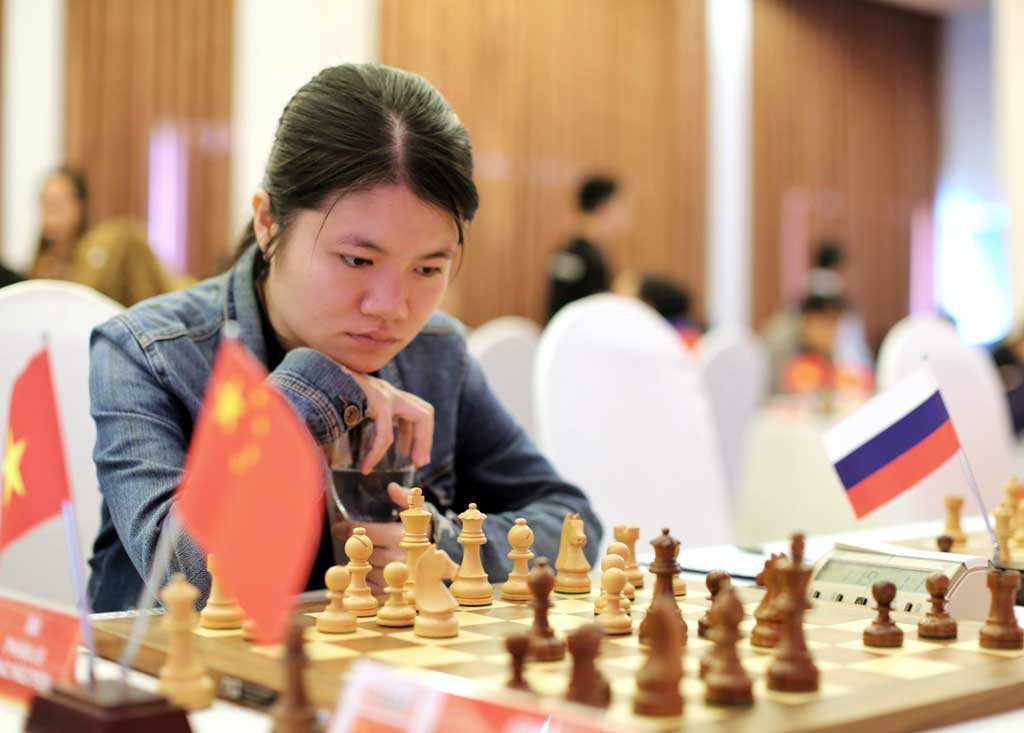 Pham Le Thao Nguyen, who beat Lela Javakhishvili and Aleksandra Goryachkina in the recent Women's World Championship in Tehran before losing to Anna Muzychuk - here she drew with Lu Shanglei in Round 1 | photo: vietnamchess.vn

19-year-old Tran Tuan Minh, meanwhile, is joint leader after killing the giant killers! In Round 2 he “punished” Chinese-Singaporean WGM and IM Li Ruofan for outplaying 2664-rated Sandro Mareco in the first round. Then in Round 3 he brought Wei Yi’s vanquisher Viacheslav Diu down to earth with a nice win. Next up, of course, will be Wang Hao.

It’s been a good start for Vietnamese players all round, with 15-year-old Nguyen Ahn Khoi, already an U10 and U12 World Youth Champion and the reigning Vietnamese Champion, simply demolishing 2624-rated Lu Shanglei in Round 3. The Vietnamese no. 1 Le Quang Liem had to concede a draw by repetition in Round 3, but otherwise he’s looked sharp. 25…f6? allowed a flashy if straightforward finish in his game against compatriot IM Vo Thanh Ninh: 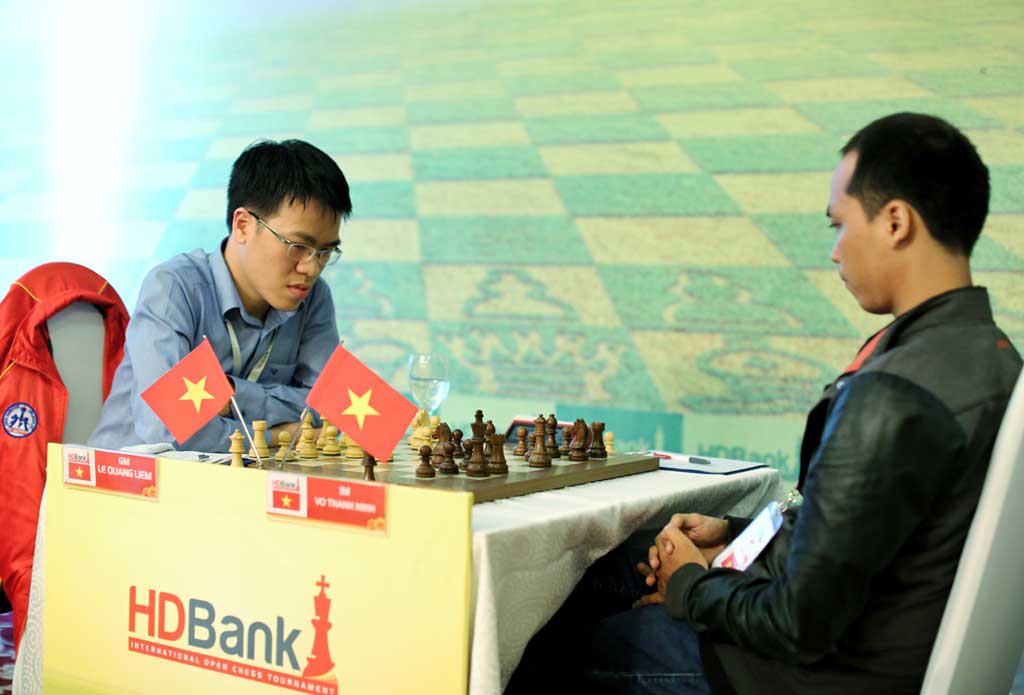 Le Quang Liem on the way to victory | photo: vietnamchess.vn

So one third of the way through the tournament we have two leaders followed by 13 players on 2.5/3:

Rounds 4 and 5 will both be played on Tuesday, which means that whatever time zone you're in you can probably find at least one round that's convenient to watch! You can follow all the games live here on chess24.

You can also watch the games for free in our mobile apps: