Vugar Gashimov passes away at age 27

Vugar Gashimov is dead. The chess world received the sad news on January 11th that Vugar had died overnight of a brain tumour in a hospital in Heidelberg, Germany.

The grandmaster from Azerbaijan had been ill for a long time. The first time I became aware of that was when we saw him collapse during the 2011 European Team Championship in a match against France, although he did return for the next match against Russia.

Shortly afterwards he played his last tournament in January 2012 in Wijk aan Zee. After that, apart from a couple of games in the Bundesliga, his illness kept him away from the chessboard.

We would occasionally hear about him - that he was in treatment in Germany and his condition was very serious - but the finality of his losing the fight for good is still a big shock and hard to accept.

With Vugar chess loses not only one of its strongest players, rated 2761 as recently as January 2012, but also one of the nicest guys around.

My fondest memories stem from the summer of 2010, when I had the chance to be Vugar's teammate for the Spanish Kasparov-Marcote club. Vugar was our first board and carried our team to a surprising title, defeating Nakamura, Navara and Shirov along the way. 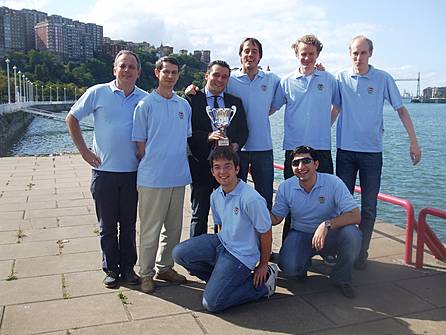 The Kasparov-Marcote team after winning the Spanish League in 2010. Vugar is on the lower right | photo: Smaranda Padurariu

Even more than his play I remember how much fun it was hanging out with him. No particular adventures, but just the little things:

- Vugar inviting us for tea in the hotel lobby, chatting about everything from football, life in Spain and Germany and silly movies to his game plan against Nakamura ("I'll play something boring and hope he gets too excited").

- A late-night quest to find a pizza place in the middle of nowhere (we made it!).

- Countless laughs, be it about Smeetsiboy's T-shirt choices, Salgado's sleeping habits, my chess style taking chicken to new extremes or anything else that would pop up.

- His optimism and faith in our team. When Vallejo was defending a horrible ending in the semifinals with the score on 2.5-2.5 Vugar was the one guy who stayed positive: "Don't worry guys, it was much worse before. Paco will hold and we'll crush them in tiebreaks". Which is what happened.

I don't think my words can fully do him justice or describe Vugar as a person. He was just a guy you were always happy to see - good-natured, funny, clever, very open and happy to talk to anybody about anything at any time.

As a chess player, he was simply one of the world's best - a universal player who not only put the Benoni back on the map, but was also one of the greatest Ruy Lopez players I've ever seen. Who knows what his ceiling could have been.