Vitiugov and Anton triumph in Prague 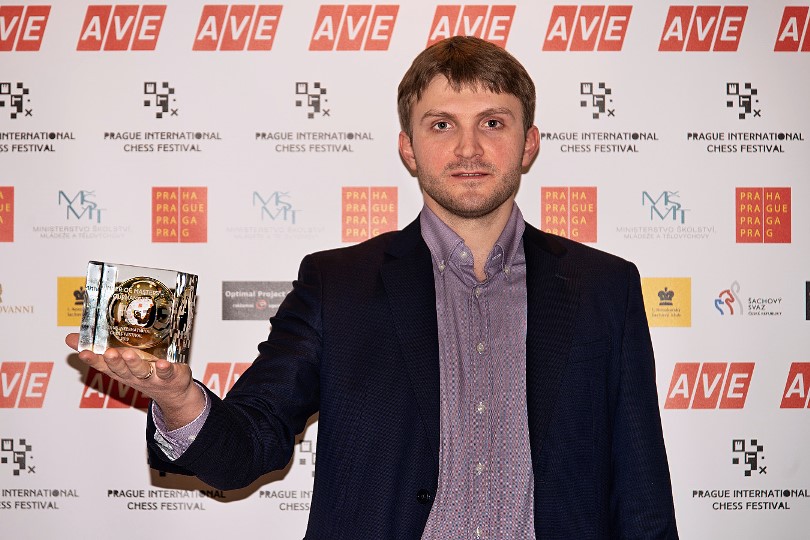 When we last reported on the Prague Chess Festival 20-year-old Polish Grandmaster Jan-Krzysztof Duda was the sole leader of the Masters while 13-year-old Indian prodigy Praggnanandhaa had just defeated Ju Wenjun and Alexei Shirov in consecutive rounds to join a 5-player leading pack. It turned out, however, that the youngsters wouldn’t lead for long! Let’s start with the Masters:

You can replay all the games from the 2019 Prague Masters using the selector below:

After the rest day all games were drawn in Round 6, but in Round 7 we got what turned out to be the decisive moment of the whole event: Nikita Vitiugov defeated Jan-Krzysztof Duda to take over the lead. Nikita played the 6.a4 sideline against the Najdorf, with Duda initially reacting in the same way (6…g6) as Maxime Vachier-Lagrave had against Vitiugov in a recent Bundesliga game, where White also got winning chances. 10…Nxd4 was a deviation by Duda, while 13.Ra4! seems to be the first new move of the game, improving on Adams 0-1 Nepomniachtchi from the 2017 London Chess Classic:

Nikita described this as “an important move to stop Bc4”, and the rook would later come to b4 to further paralyse Black’s queenside. He felt he was well on top after 18…e5?!, while the last chance for Black came on move 24:

24…Ne8!? looks dicey, but the computer claims Black is still holding on after e.g. 25.e5 Qxb2! 26.Nd5 Kh8!. Instead in the game after 24…Qxb2? 25.Nd5! Rxc2 (Nikita suggested 25…Nxd5, but objectively White is still winning after 26.Qxd5) 26.Ba3 Black was soon simply a piece down. Duda decided to play on to the bitter end, but Nikita was never going to fall for stalemate tricks and duly delivered mate on the board.

Afterwards he talked about the game and gave his recipe for success:

It always depends on good moves. Are you the leader or the outsider you should do the same – play the best moves, or at least try to play them!

From there on it was enough for Nikita to draw his remaining games against Wojtaszek and Rapport to take clear first place in one of the rare elite round-robins he’s had the chance to play: 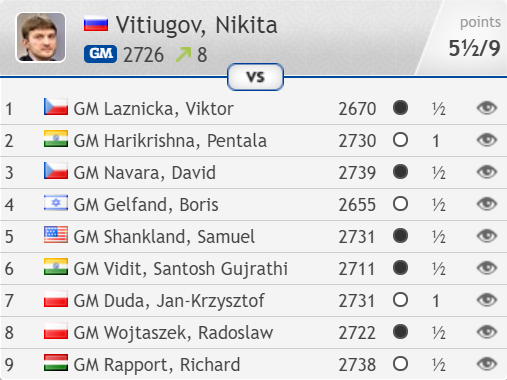 The final standings in the Masters were shaken up at the last moment. Harikrishna went for a plan (14…c5?!) against Boris Gelfand that had already got Jon Ludvig Hammer into deep trouble against Hou Yifan in the 2017 Moscow Grand Prix. 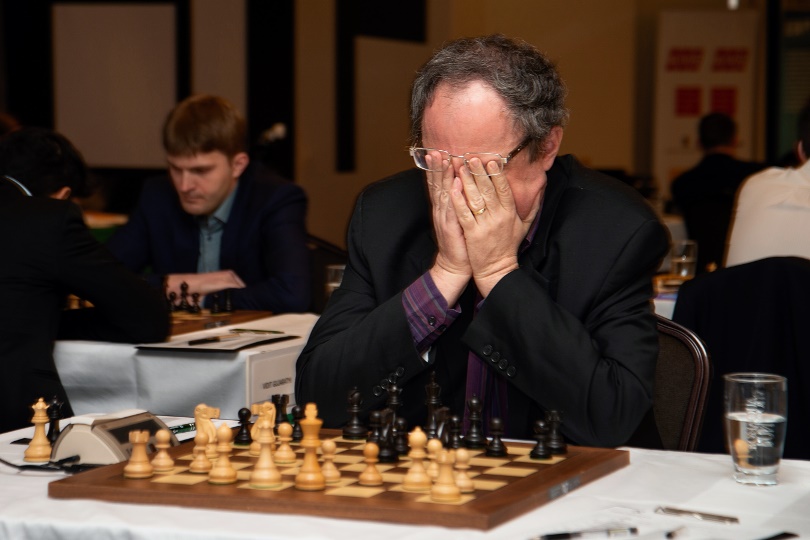 Boris Gelfand struck in the final round to end on a plus score | photo: Vladimír Jagr, official website

Soon White’s pieces had Black in all kinds of pins, and Boris found the swiftest finish:

Of course it is a good result for me, especially because recently I did not play so well. I am happy to be here and I am satisfied with my tournament. 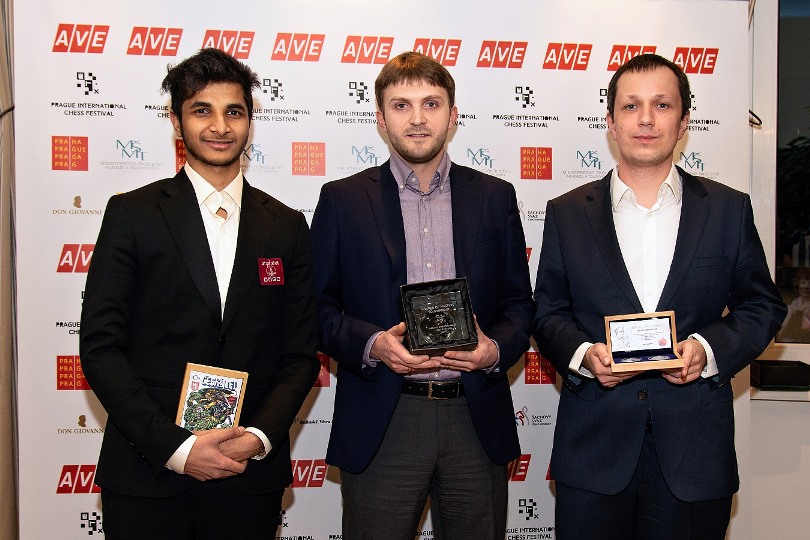 Gelfand was tied for second place but finished 5th on tiebreaks, while Vidit’s last round win was enough to give him 2nd place. David Navara’s 24.Rc1? was asking for trouble (24.Kf2 does run into 24…Nxb2, but after 25.Kg3 White’s chances of survival are much better):

Here are the full final standings (you can also click on a game to open it with computer analysis): 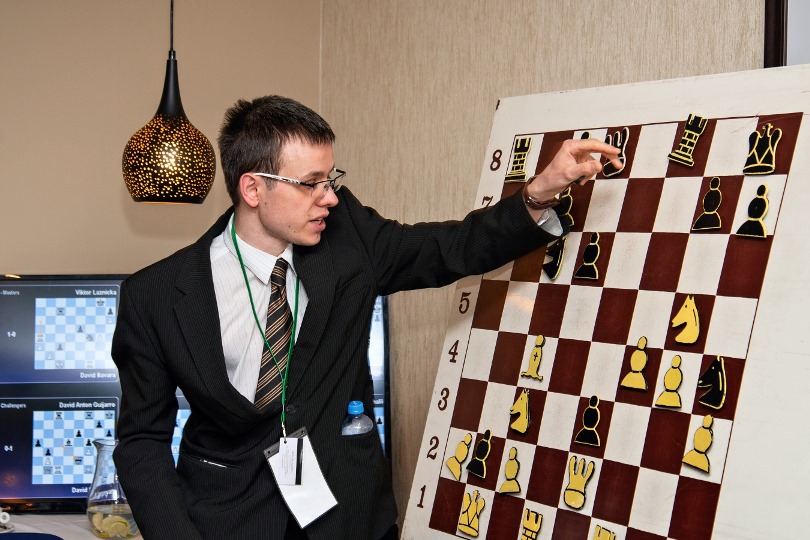 It was a tough event for the Czech numbers 1 and 2, with only David Navara scoring a win... over his compatriot Viktor Laznicka! | photo: Vladimír Jagr, official website

US Champion Sam Shankland wasn’t too happy with his warm-up as he aims to defend his title in St. Louis from Wednesday onwards:

The game against Richard Rapport was probably the most dramatic of the whole event, and deserves at least a diagram!

Sam, playing Black, had been winning earlier, but here he ran into the incredible 28.Bg5!!, coolly threatening 29.Bh6# if Black captures on d8. After 28…Ng8 29.Qd6+ Qe7 30.Nxh7+ White was winning, but Rapport went astray in the huge complications that followed.

David Anton earns a spot in the 2020 Masters 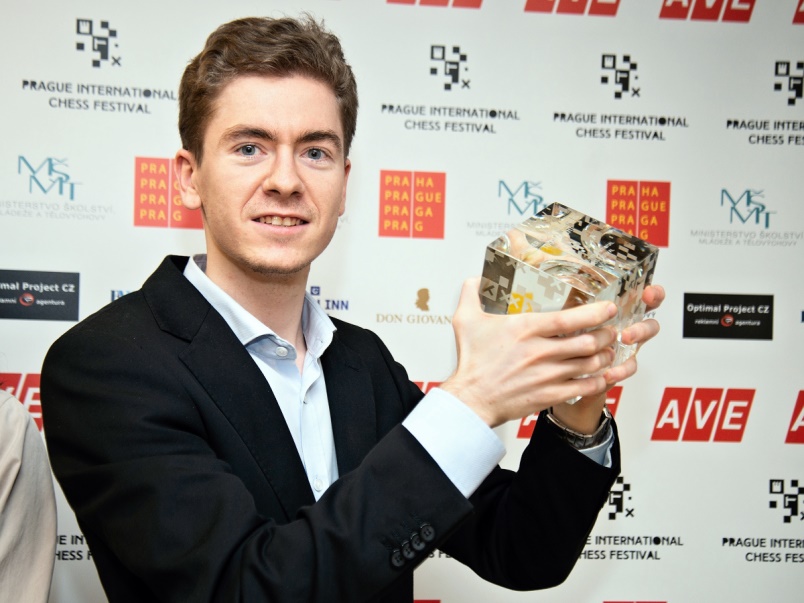 Spain's David Anton will get the chance to take on some of the world's best in the Masters next year | photo: Vladimír Jagr, official website

The turnaround was even more dramatic in the Challengers, with all five games proving decisive in Round 7. After two big wins in a row Praggnanandhaa was stopped in his tracks by 26-year-old local star Jan Krejci, who convincingly outplayed the Indian prodigy. Alexei Shirov, who had been beaten by Praggnanandhaa in the previous round, produced the game of the day to defeat Ju Wenjun. 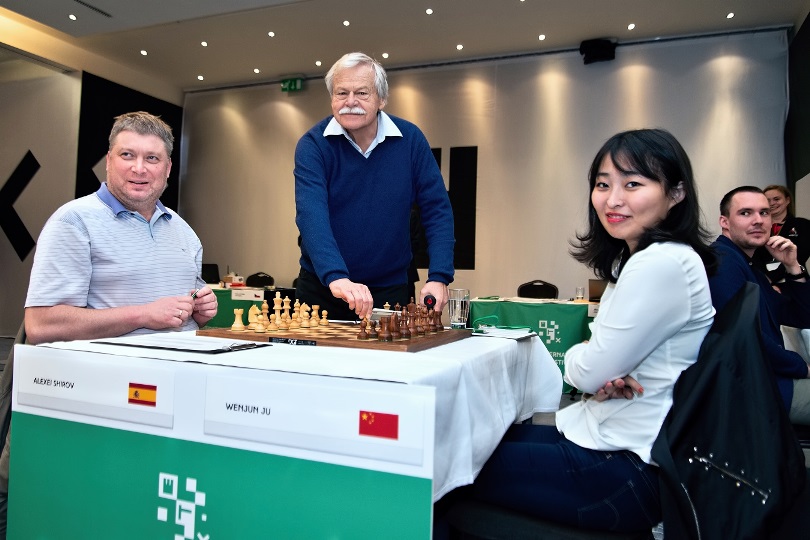 Chess legend Vlastimil Hort got Shirov-Ju Wenjun underway - it was a tough game for the Women's World Champion, but she'd bounce back by playing the game of the day herself in the next round | photo: Vladimír Jagr, official website

The finish was brutal:

David Anton also took his chance to move up by converting an extra pawn against Thai Dai Van Nguyen, and in the next round he took the sole lead by beating David Paravyan with Black in a strange game that left theory by move 7. Praggnanandhaa lost again, this time to Peter Michalik, and it seemed as though it was going to be 3 losses in a row for him and 3 wins in a row for Anton when they met in the final round. In the end Anton delayed pushing a passed pawn too long and the game fizzled out into a draw, but it proved enough for David to take clear first place. 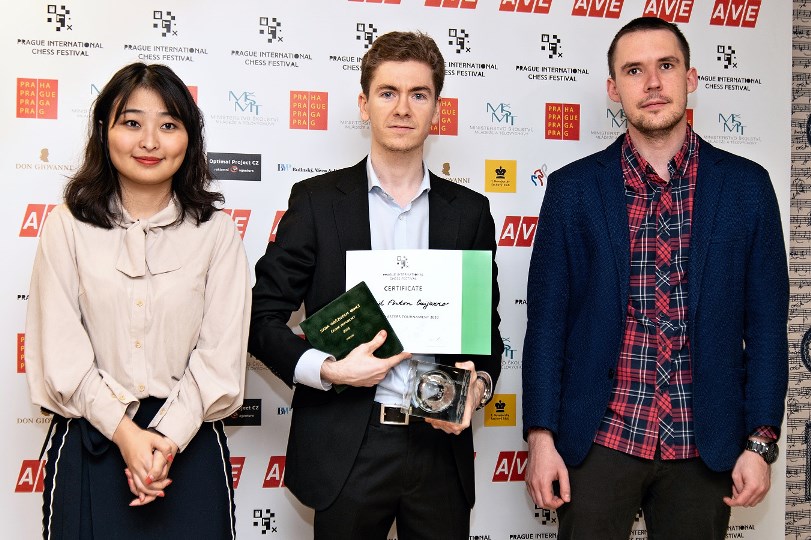 He commented of the game:

I was not thinking about the result today. I knew my position was winning, and I thought I will win one way or another. But then I realized it was not so easy…

It meant an invitation to the 2020 Prague Masters:

It will be one of the strongest tournaments I have ever played, so I am really looking forward to it. I am happy with my games and my result here, and I can't wait to come here again.

The final standings were as follows, with Jan Krejci taking second place and Ju Wenjun third:

The other winner in Prague was Icelandic Grandmaster Hannes Stefansson, who won six games and drew three to finish in clear first with 7.5/9 in the Open tournament. You can check out the games here. 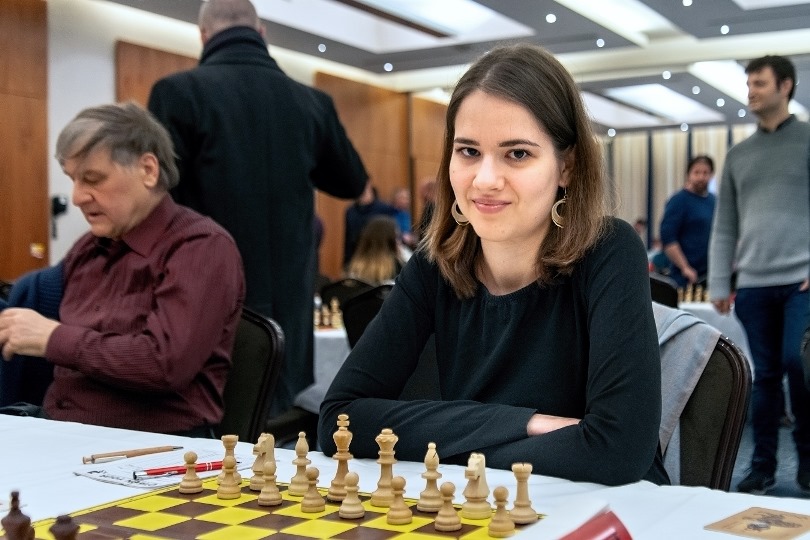 The next big chess events on the horizon are the European Championship, that starts tomorrow with Vladislav Artemiev the top seed, and the US Championship, that begins on Wednesday with Fabiano Caruana, Wesley So, Hikaru Nakamura and defending champion Sam Shankland this year joined by Leinier Dominguez, who, after switching chess federation, is about to play his first official classical games in three years!