Vishy Anand wins Superbet Rapid with round to spare

Vishy Anand rolled back the years as he clinched victory in the rapid section of the Superbet Rapid & Blitz in Warsaw with a round to spare. He began the final day of rapid chess by outplaying David Gavrilescu with the black pieces for a 6th win in 7 games. A draw against Fabiano Caruana was then enough for Vishy to top the table after his key rival Richard Rapport went astray and lost a winning position to Wesley So. 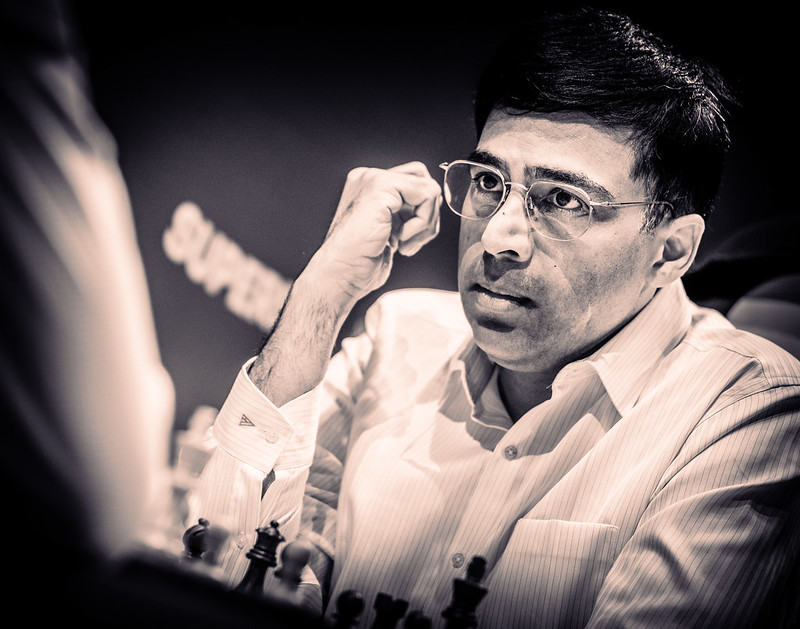 Vishy Anand reminded us all that he was once the most feared rapid and blitz player in the world, perhaps with the exception of Garry Kasparov | photo: Lennart Ootes, Grand Chess Tour

19-year-old Romanian David Gavrilescu, who only found out he was playing in the tournament around a week before it began, started with four losses, but had stabilised with draws against Radek Wojtaszek and Wesley So before going into the Round 7 clash with Vishy Anand. 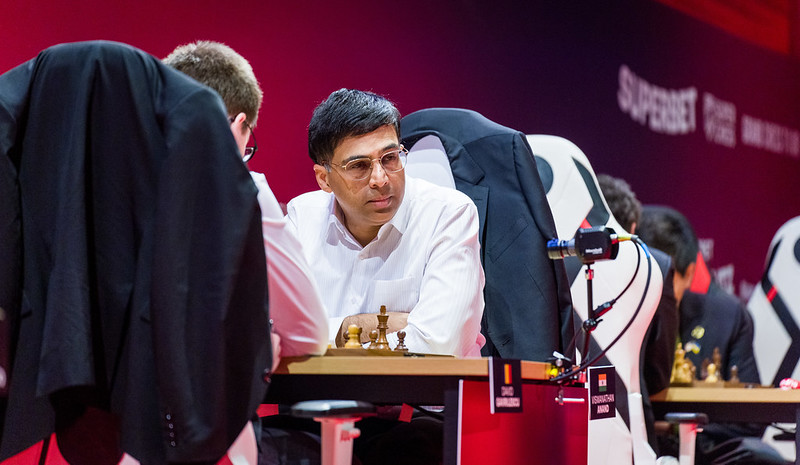 His Scotch opening also seemed to go reasonably well, but then suddenly he collapsed in a couple of moves. 17.Na4? was a bad case of putting a knight on the rim, and then 18.b3 invited Vishy Anand to demonstrate his tactical prowess.

Vishy has been missing very little in Warsaw, and soon went for the winning 18…c4! If White plays 19.Qxc4 he gets hit by 19…Ba6!, while 19.bxc4 runs into 19…Rb4! The computer claims 19.Nb2 as relatively best, but White’s position would still be in ruins.

Instead after 19.Rfd1 Be6! 20.Rb1 Rfc8! White could already resign with a clear conscience, though David understandably delayed until, with 25…Rc4!, it was finally clear that the white knight was not going to return from the edge of the board.

It had been quite an incredible run by 52-year-old Vishy Anand.

There was still some pressure on Vishy, however, since 2nd placed Richard Rapport outwitted Radek Wojtaszek in a complicated endgame to win a 4th game in a row, keeping within two points, or a single win, of Vishy. Then, when Vishy made a 27-move draw in the Petroff against Fabiano Caruana and Richard was winning against Wesley So, it looked like the gap would be less than a point before Rapport-Anand in the final rapid game of the day. 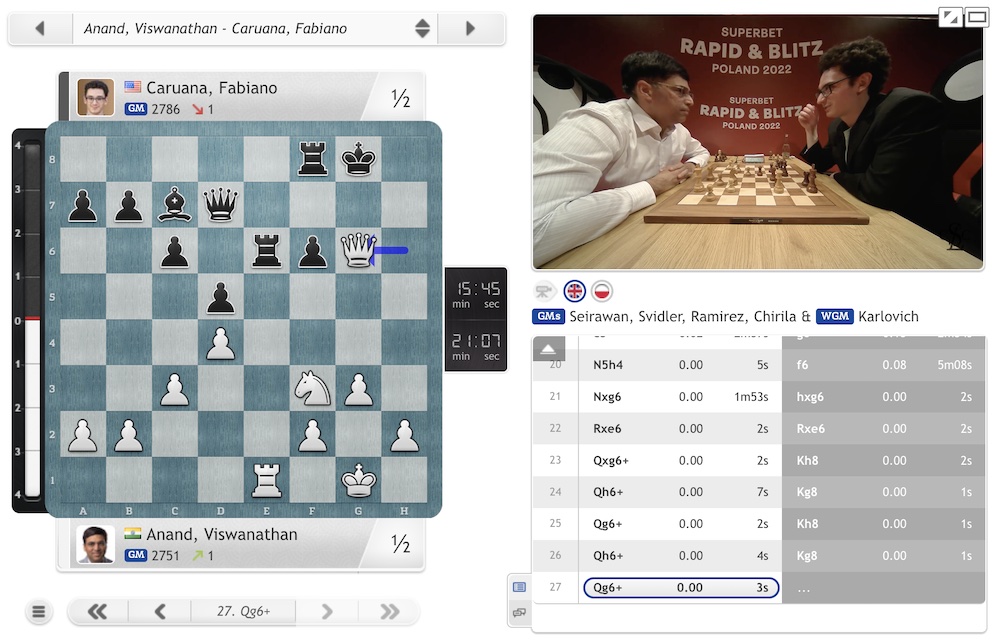 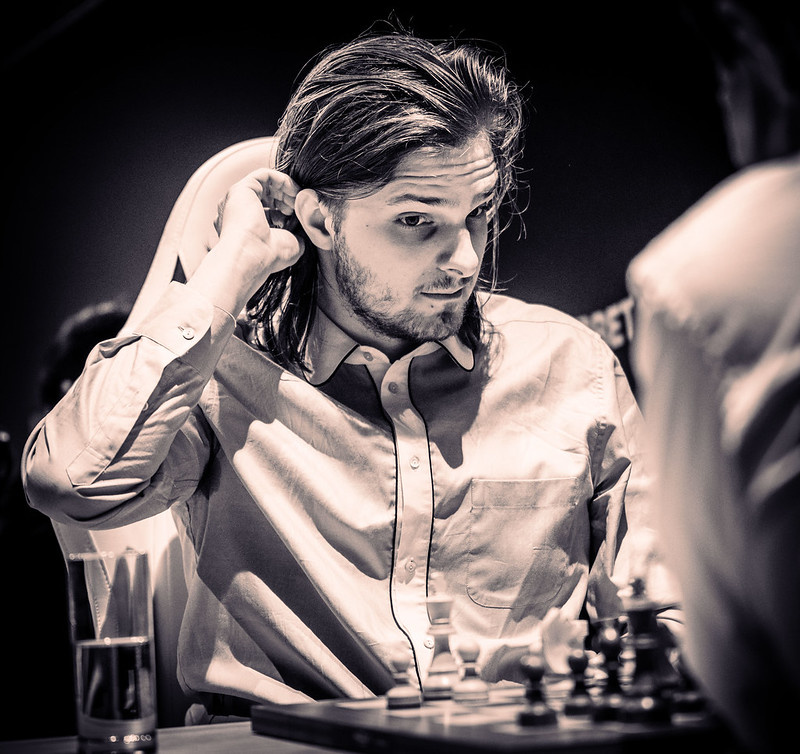 Richard Rapport finished last in Bucharest, but was back on form in Warsaw | photo: Lennart Ootes, Grand Chess Tour

There would be a huge twist, however, in the following position. 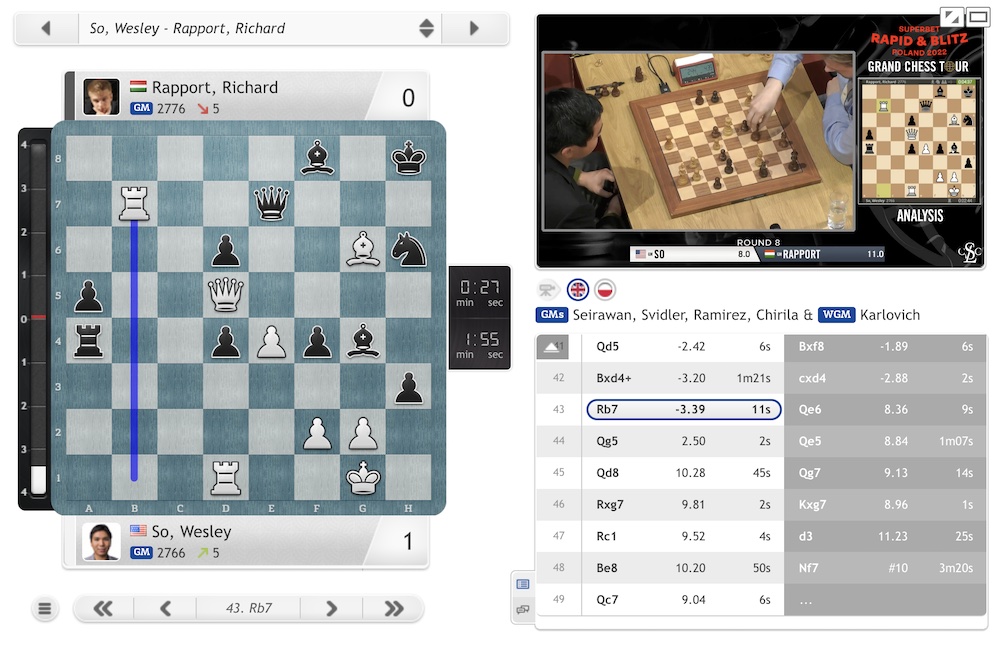 It turns out that the simple blocking 43…Bd7! was winning for Rapport, but after 43…Qe6? the game suddenly swung in Wesley’s favour. 44.Qxe6? and Richard’s move would have paid off, but Wesley blitzed out 44.Qg5! (44.Rh7+! was arguably even stronger). After 44…Qe5 Wesley again dodged the exchange with 45.Qd8! and there was no defence, with 45…Qg7 an admission of defeat. Resignation soon followed. 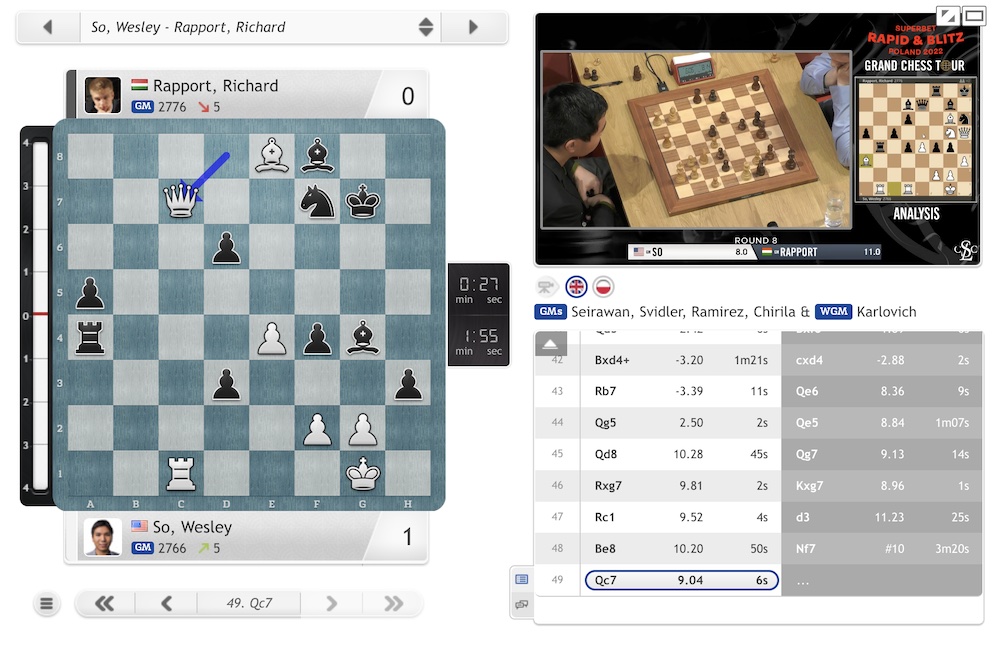 That meant Vishy could no longer be caught and he’d made a triumphant return to the board, even if there was no separate trophy for finishing 1st in the rapid section.

Rapport-Anand in the final round of the day was exciting, nevertheless, with Vishy coming close to surviving a dicey position before 35...Qd6? (35...Qd5! was the move) allowed Richard the winning blow 36.Qxf7+!

After 36...Kxf7 37.fxg7+ the pawn queens with check and White emerges with an overwhelming advantage.

That victory set up the blitz perfectly, with Rapport just one point behind, while blitz specialist Jan-Krzysztof Duda finished the Rapid by beating Levon Aronian and Anton Korobov to move within two points of the leader.

There will be a combined 18 rounds of blitz on Sunday and Monday, so anything can still happen. Follow all the Superbet Rapid & Blitz action live here on chess24 from 14:00 CEST.