Wesley So won a showdown against Jeffery Xiong in Round 9 of the US Chess Championship to move to an amazing 8/9, a point clear of Xiong and Ray Robson with just two rounds to go on Thursday. Both chasing players scored impressive wins over out-of-form defending champion Hikaru Nakamura, with Jeffery getting some revenge for his Bong Cloud loss to Hikaru in the final round of the St. Louis Rapid and Blitz. The event is far from decided, since Wesley faces both Robson and Nakamura on the final day. 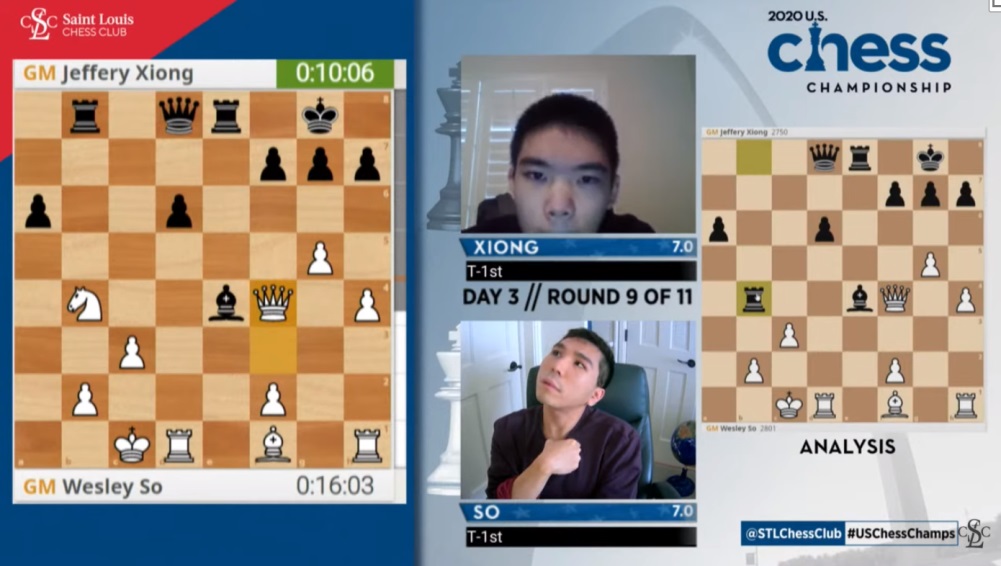 Wesley So beat Jeffery Xiong to take a 1-point lead, but the 19-year-old has the easier final day ahead

You can replay all the games from the 2020 US Chess Championship using the selector below:

And here’s the Day 3 commentary from Maurice Ashley, Jennifer Shahade and Yasser Seirawan.

5-time and defending US Chess Champion Hikaru Nakamura went into Day 3 of the 2020 event trailing Wesley So by 2.5 points. It was now or never if he was going to mount a challenge, and any doubts about his approach were dispelled when he tweeted before the start of play.

That statement provoked some responses!

Hikaru was also trailing his opponent Jeffery Xiong by 2 points, and decided to play the most common opening at the elite level when needing to win on demand against 1.e4 with the black pieces – the Modern Defence with g6 and d6. It has a dubious reputation, but nowhere near as dubious as the 1.e4 2.Ke2 Bong Cloud Hikaru had played against Jeffery in the final round of the St. Louis Rapid and Blitz a month earlier. Despite a lost position out of the opening, Hikaru won that game, but this time Jeffery was to get sweet revenge.

When 18.Bc4! appeared on the board Hikaru already knew he was in deep trouble.

The simple threat of Ng5 and capturing on f7 is highly unpleasant, and after 18…Nf8 (played after 6 minutes' thought) 19.Qd6! Jeffery exchanged off queens to get what he made appear a technically won endgame. It was reminiscent of the one-way traffic in Hikaru’s loss to Awonder Liang the day before, with a crisp finish soon following.

30.f3 would leave Black paralysed, but Jeffery saw no need for sadism and forced matters with 30.Rca7! Bxe4 31.Rxf6! Bxf6 32.Nxe4 Bd8 33.Ra8! Ne6 and Hikaru resigned since opponent can win in almost any way he chooses.

A 3-way race between So, Xiong and Robson

It seemed at first that Wesley So had decided that on +5 he could safely draw his way to the finish line, and he played a fast 28-move draw against Sam Sevian. It turned out, however, that he was caught immediately both by Xiong and Ray Robson, with the latter crushing Elshan Moradiabadi.

After 16.Bxc4! dxc4 17.d5! there was no looking back for Ray, who soon had an overwhelming advantage that he converted in real style.

Moradiabadi had unfortunate pairings, since after being pummelled by Xiong and Robson in his previous two games he came up against So in Round 8. Wesley made no mistake and smoothly picked up a full point with the black pieces.

That meant all eyes were on Xiong-Robson, where Jeffery played the Scotch.15…Ne5!? seems to have been an inaccuracy by Ray Robson.

16.Ba3! Qxa3 17.Qxe5 left White with a dominant queen and an extra pawn, while later in the game Jeffery was able to crash through on the kingside. That meant he went into the final round of the day still level with Wesley and, as fate would have it, the two leaders were playing each other.

“The Sveshnikov is very solid, so I wasn’t trying to be that ambitious in the opening,” said Wesley, but Jeffery's over-the-board novelty 16…Bb7!? (played after 6 minutes' thought) left both players out of book, with a fascinating struggle ahead. 19…b4!? took another 6 minutes, but it was worth it.

23…Bxh1 24.Qxb4 Bf3 25.Rd2 left a dynamically balanced but very complicated position, with the problem for Jeffery being that he had only 2 minutes to Wesley’s 14. As Wesley explained:

I didn’t have time to calculate everything, so I was just playing my moves fast and then thinking on my opponent’s time – seems like a good idea!

An endgame soon arose where White’s queenside pawns had a head start over Black’s pawns on the kingside, but despite the lack of time Jeffery defended brilliantly… up to a point.

Yasser felt 47…Bd5!, with the bishop coming to e6 to cement the position, should be a draw, and the all-knowing 7-piece tablebases concur. All other moves lose, including 47…f5, as played by Jeffery. After 48.Kd3! Wesley didn’t put a foot wrong, finishing the game by sacrificing the exchange on f5 for a winning pawn endgame.

Wesley, now on 8/9, was asked if he could have imagined things would go so well for him.

No, definitely not! Everything’s going right in this tournament. I’m trying to squeeze my games and somehow my opponents are making mistakes, so yes, definitely it’s a dream tournament. I’m also getting positions I like out of the opening, but it’s not over yet, because I play Ray Robson tomorrow.

Ray Robson has White in that penultimate round game and is, like Xiong, just a point behind after winning a great game against Hikaru Nakamura.

18.Ndb5! axb5 19.Nd5! was a known but still spectacular tactical operation, and although after 19…exd5 20.Bxf6 g6 the position was roughly equal, Ray went on to apply pressure until Hikaru ultimately cracked.

The final day couldn’t be set up better, with Wesley’s final round opponent none other than Nakamura! Wesley noted he has White in that game and Hikaru is out of form, but the defending US Champion may relish the opportunity to decide his successor. Jeffery Xiong may be ready to pounce on any slip-up by Wesley, since he faces the struggling Alex Lenderman and Alejandro Ramirez.

A tie for first place would mean a playoff featuring two 10+2 rapid games and potential Armageddon. Don’t miss all the action live from 19:00 CEST here on chess24!