In 2015 Wesley So’s US Championship was derailed when he lost a 6-move forfeit game against Varuzhan Akobian. This year they got to play a full game, or at least 24 moves, which was all it took for So to crush his opponent. That saw Wesley join Fabiano Caruana in the lead before the rest day, while Hikaru Nakamura also moved up with an easy win over Sam Shankland. Gata Kamsky could have been the hero of the day, but spoiled a brilliancy against 15-year-old Jeffery Xiong. 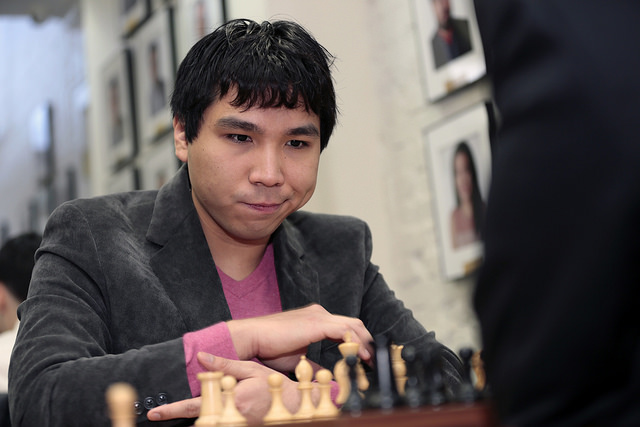 Wesley So seems to have put his troubles last year behind him and is the co-leader, with all eyes on his next game vs. Hikaru Nakamura | photo: Spectrum Studios, St. Louis Chess Club

It was a dramatic day in the US Championship, and one that could very easily have seen five decisive games:

The game everyone was talking about was So-Akobian, first because of the backstory from a year ago, but then because of some scintillating attacking chess. Wesley noted afterwards his 7.c3 “was inspired because Kasparov played it 14 years ago”, and he was already looking forward to the prospect of it being played in the blitz tournament with Garry after the main event is over. Akobian was soon thinking hard, and missed a potential lifeline at the end as he was down to only a couple of minutes. So commented, “I saw this, but I was kind of praying that he wouldn’t find it!”

Spanish GM Pepe Cuenca takes us through the game:

It was a similar story in Nakamura-Shankland, with Hikaru outpreparing Sam and relishing his opponent’s failure to exchange queens early on. It developed into a massacre that was essentially over just after move 20, though it dragged on to move 37.

It looked like being a day on which the youngsters met their match. Akshat Chandra was soon in such deep trouble against Alexander Onischuk that Nakamura was again kicking himself for the draw he conceded against the 16-year-old in Round 3. There was no great escape for Akshat. 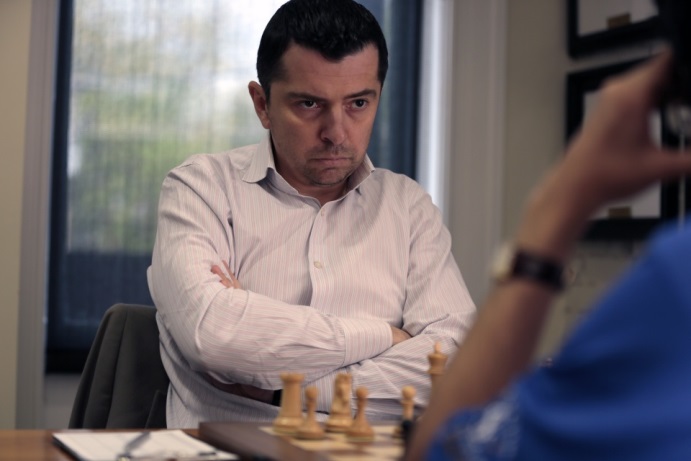 How many 16-year-olds could withstand such a stare from a battle-hardened former US Champion! | photo: Spectrum Studios, St. Louis Chess Club

15-year-old Jeffery Xiong had scored a confident four draws on his debut, but came up against an inspired opponent in 41-year-old 5-time US Champion Gata Kamsky. 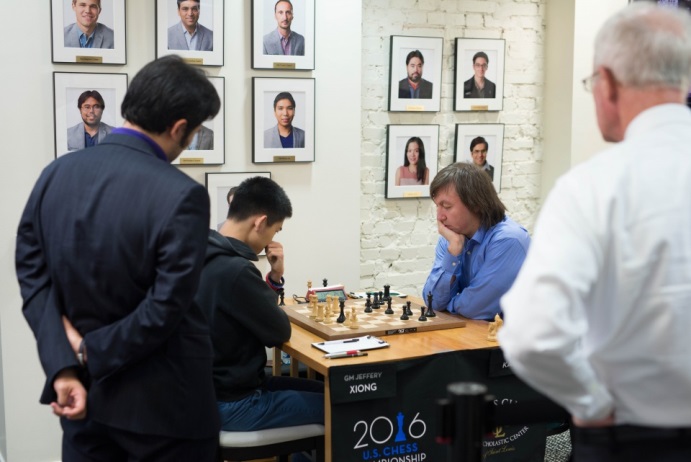 The b6-knight was under attack, but this is when the game moved into brilliancy territory:

This looks close to becoming an “immortal zugzwang game”, but Jeffery didn’t falter, and starting with 21.f3! he calmly dealt with all the threats, as Gata’s frustration grew and grew until a familiar story unfolded:

I just wasn’t satisfied with a draw and I overpressed and I blundered.

Blundered is almost an understatement:

Jeffery is now up to fourth place, and described his emotions:

It feels incredible, because you’re talking about a guy who’s been competing at the highest level before I was even born.

There was some company in misery for Kamsky, since Ray Robson missed a huge chance to join the leaders. Despite being down to 30 seconds for 20 moves he found most of the best options and reached what looked like a simple winning endgame against Aleksandr Lenderman. One false move on move 51, though, and a draw was unavoidable, with Lenderman calling it "a miraculous gift". 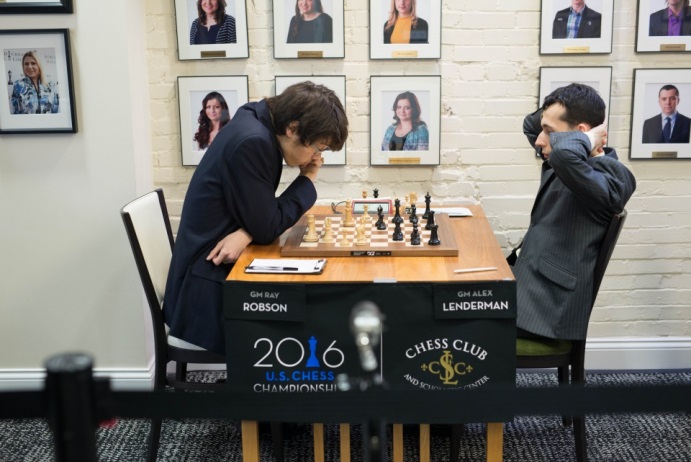 Some have noted a hint of vampire about Alex Lenderman, and in this tournament it's certainly seemed at times that you'd need to drive a stake through his heart to beat him... | photo: Austin Fuller, St. Louis Chess Club

The only game that wasn’t anything to write home about was a quiet outing for Fabiano Caruana, who had to defend solidly with Black against Alexander Shabalov.

Caruana and So lead on the tournament’s only rest day:

In the women’s event, meanwhile, it’s Nazi Paikidze who’s ahead of the pack, with three wins and two draws in her five games. 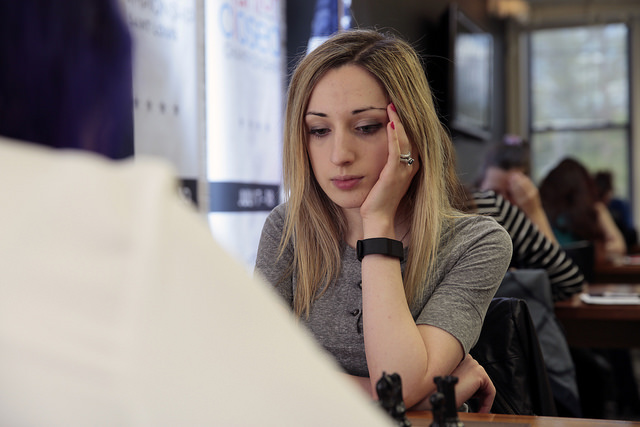 Nazi Paikidze has the amazing record of being unbeaten both in this year's US Championship and the 2015 event as well | photo: Spectrum Studios, St. Louis Chess Club

In Round 6 she meets 12-year-old Carissa Yip, who has now lost two games in a row after taking the early tournament lead.

The US action starts again with Round 6 at 20:00 CEST on Wednesday 20 April. In case you missed the Round 5 live show with Yasser, Jennifer and Maurice, you can rewatch it below: