18-year-old Carissa Yip has won her first US Women’s Chess Championship, with a round to spare, after scoring a 5th win in row while Irina Krush was held to a draw. The Open event sees six players go into the final round with a chance of clinching the title, with Fabiano Caruana suddenly leading alongside Wesley So and Sam Sevian after winning a thriller against Alex Lenderman. All but one of Monday’s Round 11 ties could decide the title. 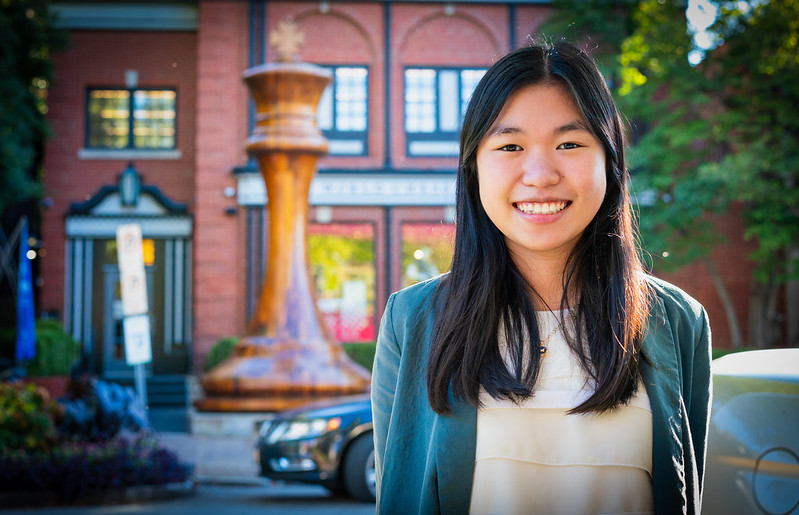 You can replay all the games from the 2021 US Chess Championship using the selector below. 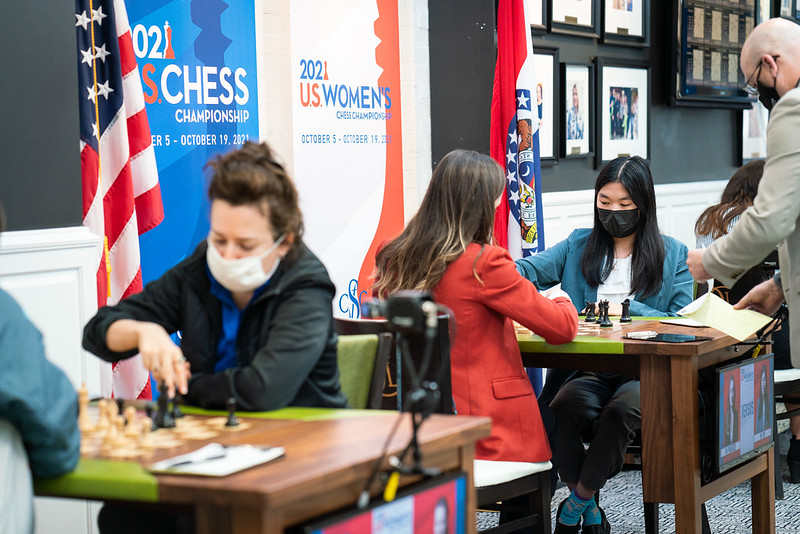 Carissa Yip has been in incredible form since losing to Gulrukhbegim Tokhirjonova in Round 5, with five wins in a row leaving her uncatchable going into the final round.

Her penultimate round clash with 2-time US Women’s Champion Nazi Paikidze looked like a potential stumbling block, with Carissa herself commenting afterwards:

I guess it still hasn’t really sunk in, but I’m so happy I can’t stop smiling! I was really surprised to win this game, because I was mostly thinking Nazi is really solid with White, I’ll just probably have to fight it out for a draw, and then tomorrow just try not to lose, so this was really a surprise.

Until move 21 it looked as though Carissa might be in trouble, with her Modern opening leaving her a shaky position, but a very healthy lead on the clock. That factor may have been decisive when she played the double-edged 21…h5!?, relying on the resource 22.Bxg5 h4! 23.g4 Bxg4! That continuation would have been good for Black, but Carissa realised that if her opponent essentially did nothing the position would still be tough to play.

Instead 22.f4? left White dead in the water.

Everything worked out perfectly for Carissa, with Irina Krush taking a draw against Thalia Cervantes just in time so that the 18-year-old’s win immediately meant a 1st US Women’s Championship title!

It was thoroughly deserved and, you suspect, will be the first of many.

It’s been all about the Fabiano Caruana comeback in recent rounds of the US Chess Championship, and Round 10 was no different. With Sevian-So, Xiong-Dominguez and Robson-Burke all drawn, Fabi was able to join the leaders with a win over Alex Lenderman, his 3rd in the last four rounds. 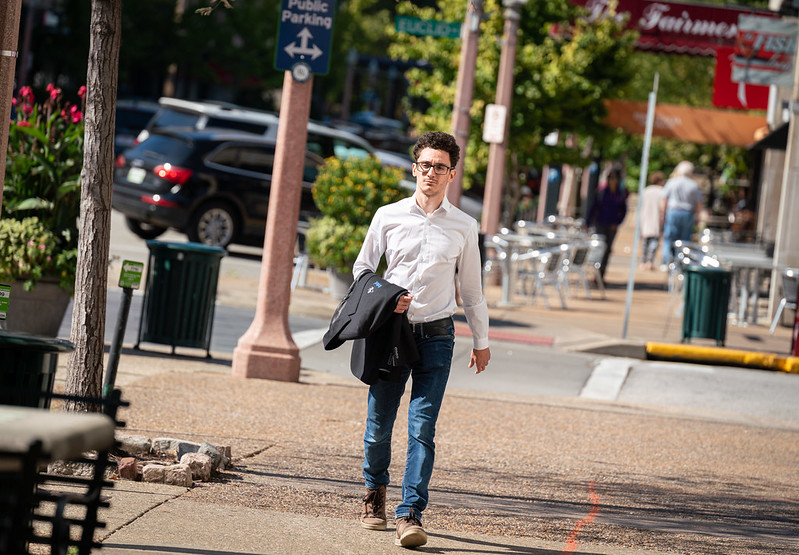 Fabiano Caruana is on a roll | photo: Lennart Ootes

It was anything but easy, with Fabi saying afterwards that he played the King’s Indian since he considered it “pretty close to a must-win game” in order to have his fate in his own hands going into the final round.

Fabiano explained afterwards that he only spent 12 minutes considering whether to go for 15…Rxc3! 16.bxc3 Nxe4 because his opponent seemed to want it. 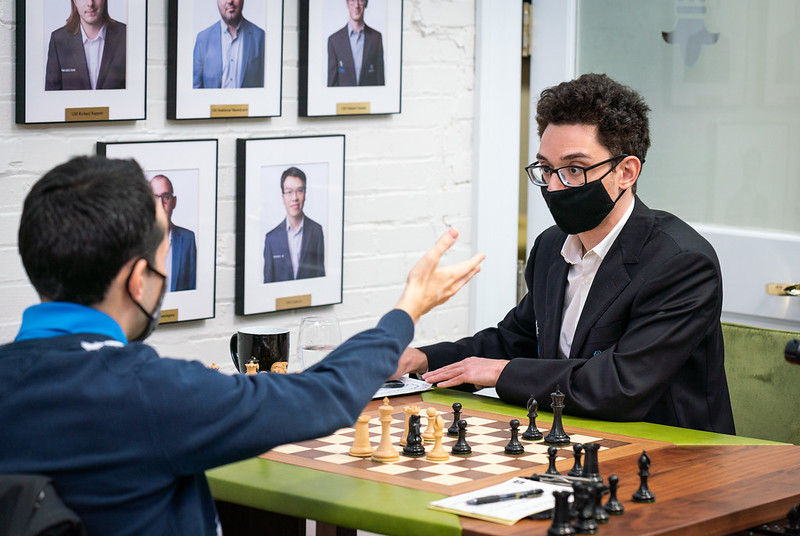 Alex Lenderman had been close to winning and taking the sole lead himself | photo: Lennart Ootes

Rxc3 looks like a no-brainer, but he did play Nf3 the move before — he invited me to do this!

Fabi nevertheless went for it.

Initially it went well with Fabi on course to grab the win he needed, but then in the run-up to the time control things got out of control. He admitted, “at some point I was sure I was losing” and said 32.Qg1! had caught him by surprise.

It was nail-biting stuff, as Alex was indeed close to a win, but also perilously low on time. Perhaps his best chance came on move 38. Fabi had just played 37…Re5!?, based on the practical logic that, “I thought he’ll expect Re3!”

The move now was 38.Qa1!, which forces queens off the board and would have left Alex with one not overly critical choice to make on move 40, with every chance of then getting to play for a win with a comfortable advantage.

Instead 38.Rc8!? was somewhat loose, though again after 38…Qd2! White would have kept things under control with 39.Qg2. Even after 39.Rc1!? Re3!? there was another chance for an easy remainder of the game if Alex had played the natural 40.Rd1!, chasing away the black queen. Instead 40.Rf1!? was inaccurate, with 40…Nd3! applying pressure.

The rest of the game wasn’t quite as straightforward for Fabi as it looked on the surface, but the world no. 2 wasn’t going to let this chance to hit the front of the US Championship slip!

That meant the table looks as follows going into the final round. 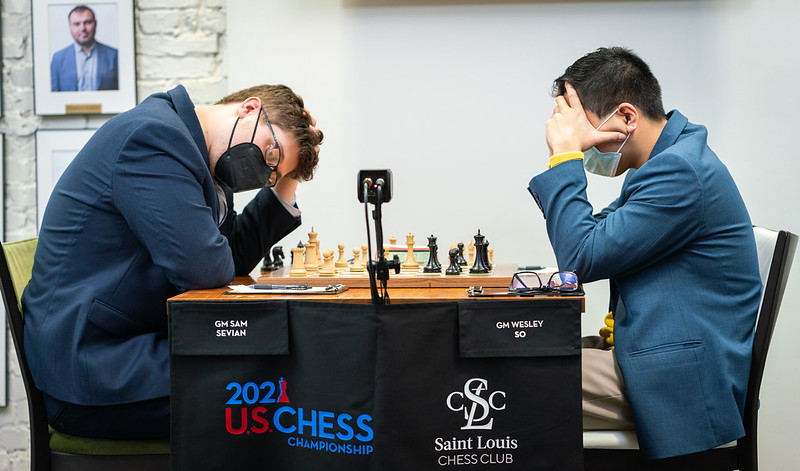 Sam Sevian had the better of the game against co-leader Wesley So, though it ended in a draw | photo: Lennart Ootes

Leinier Dominguez (White against Swiercz) and Ray Robson could also win the title, but need to hope for help from elsewhere.

In fact it’s only Burke-Xiong that can’t decided the fate of the 2021 US Chess Championship title!