US Champs R8: Nakamura on top as So struggles 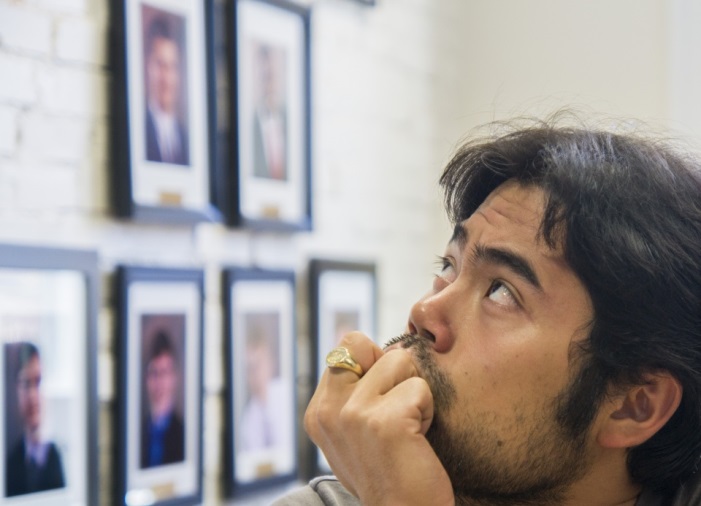 Nakamura wondering what some of the other chess players staring down from the wall will be thinking of his play? | photo: Lennart Ootes, official website

Hikaru Nakamura was raging at his “moronic” chess and “Mickey Mouse” moves, but he still bulldozed Kayden Troff into submission to take the sole lead with three rounds of the US Championship to go. Wesley So got too creative against Conrad Holt’s computer analysed line and paid the price, while Samuel Sevian’s bravery also backfired against Timur Gareev. In the women’s event 6-time champion Irina Krush is poised to pounce, though Katerina Nemcova still leads by half a point.

There was some brutal chess in Round 8 of the 2015 US Championships. Hikaru Nakamura scored the quickest win against Kayden Troff, following the same pattern as he did against Daniel Naroditsky of playing a risky opening (14…g5?!) to try and overwhelm a much lower-rated opponent. He was scathing of the way he followed it up, rightly pointing out that his opponent would be doing well after, for instance, 21.Re2, but the moment he got the chance, after 24.Qd3?, he unleashed shock and awe on the chessboard:

28…Rxe4! This was the vital detail Nakamura had to have seen in advance, but he said he saw it pretty quickly. He took no more than seconds for all his moves from 24…Qh6 onwards, with Troff only finally resigning when he was about to be mated next move. 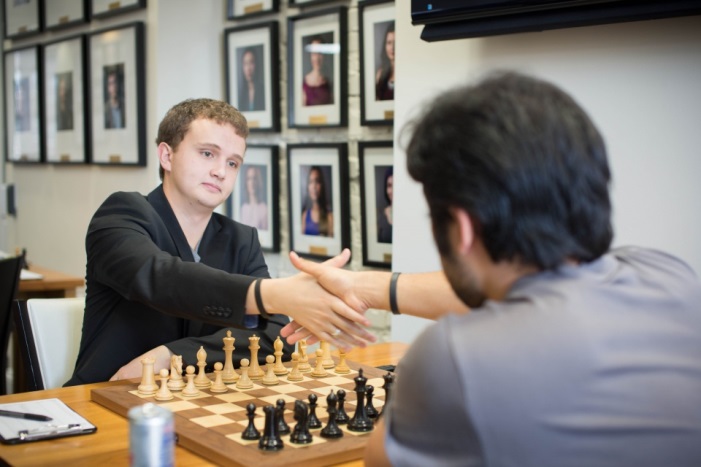 Nakamura failed to land a punch against 14-year-old Sam Sevian the day before, but took out his frustration on 16-year-old Kayden Troff | photo: official website

The win took Nakamura half a point clear of Ray Robson after four wins and four draws at the US Championship and also edged him back above 2800, but he explained why he was still unsatisfied with his play:

I wouldn’t have the score I have if I was playing against certain other players, let’s put it like that.

He also notes that top players have no choice but to take risks against lower-rated opposition or they’ll draw the way he did against Sam Sevian the day before and lose rating points. Don't miss his interview, where he reveals all top players think like him, even if they don't admit it!

Wesley So knows all about the logic of taking on weaker opposition, but he would love to have drawn rather than lose to Sam Sevian (2548), Ray Robson (2656) and now Conrad Holt (2525). The Round 8 game was a classic example of the dangers of the new computer era, when a player at any level can play the opening with perfect computer precision, even if Conrad slightly spoiled the effect by thinking for 55 (!) minutes over 18.Rd1!?:

True, he was a piece up by that point, but he admitted he’d forgotten what to do next. According to computers, at least, Black had, as so often in the Grünfeld, full compensation, but then Wesley’s desire to win and put some pressure on Nakamura led him astray with the “brilliant” 20…b5?!:

Conrad astutely remarked that his opponent got no more activity with the pawn sacrifice than he would have got without it, and in only a few moves Black’s position was hopeless. Conrad could even afford to miss absolute knockout blows, for instance…

It was a deserved win for Conrad Holt, who had suffered some painful reversals himself earlier in the tournament. The 21-year-old Physics student talked to Maurice Ashley after the game: 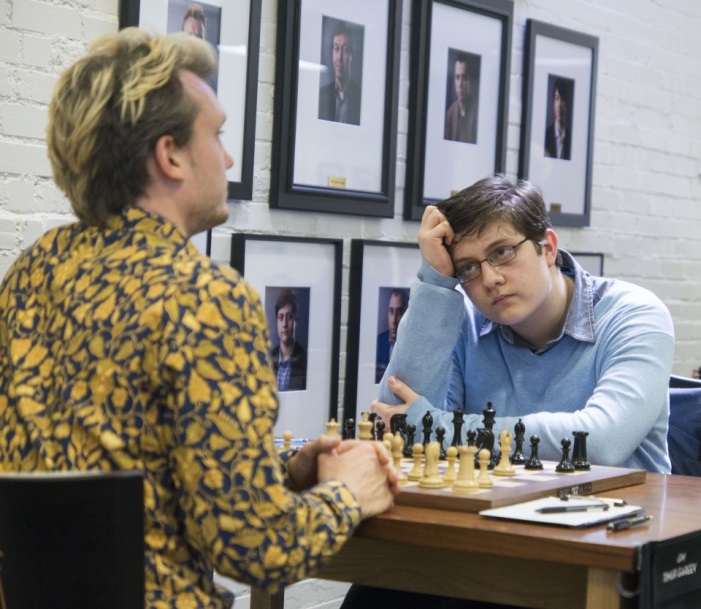 He couldn’t be faulted for boldness, and objectively his fourth move pawn grab against his Timur Gareev’s Trompowsky may have been justified, but in the play that followed he completely neglected development and was blown to smithereens, with Gareev noting 20.f5! as the move that sealed the deal:

The threat of 20…gxf5 21.Bxc4! Qxc4 22.Qxh5! is particularly lethal. It was noteworthy that Black’s queenside rook, knight and bishop didn’t manage a move between them before Sevian resigned with mate-in-6 on the board.

Gareev gave an entertaining interview after his first win of the tournament, pointing out that he was unusual at the championship as he has no aspirations to be a (non-blindfold) chess professional:

If Sam Sevian’s queenside never got moving an even sadder fate befell Daniel Naroditsky’s queen’s bishop after Alexander Onischuk's 40.a6! 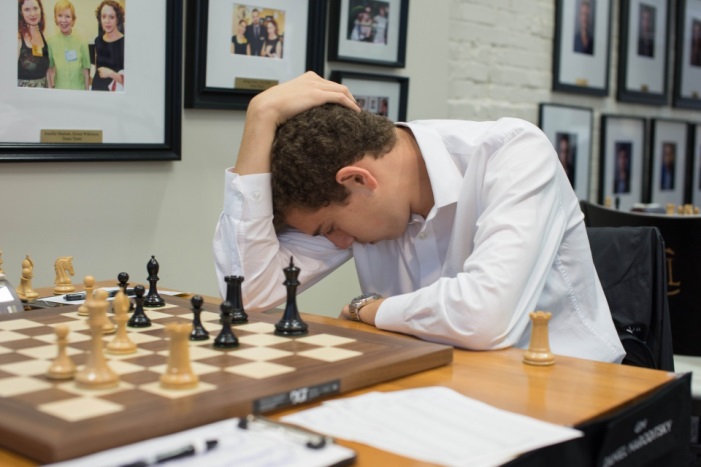 And here's the bishop in all its technicolour glory - Daniel's pose has become a familiar one at this year's US Championship | photo: official website

The computer still sees only the slightest of edges for White and might have been able to hold, but the final position after the rooks left the board was a truly pitiful sight:

Some top level chess players, who will both be in action in Shamkir next week, were provoked into commenting:

Onischuk moved up into the tie for third place, while Daniel Naroditsky’s suffering goes on. Elsewhere there were two draws, one uneventful one between Akobian and Kamsky, and one curious one between Robson and Shankland, where both Shankland and Nakamura pointed out that the computer completely misevaluates the position, claiming Black has a big edge. There’s still some hope for humanity!

So the standings with three rounds to go are as follows, with Robson playing Nakamura in Saturday’s penultimate round:

In the Women’s Championship Irina Krush’s chances of a fourth title in a row grew as her rivals Katerina Nemcova and Nazi Paikidze struggled very hard to draw their games. 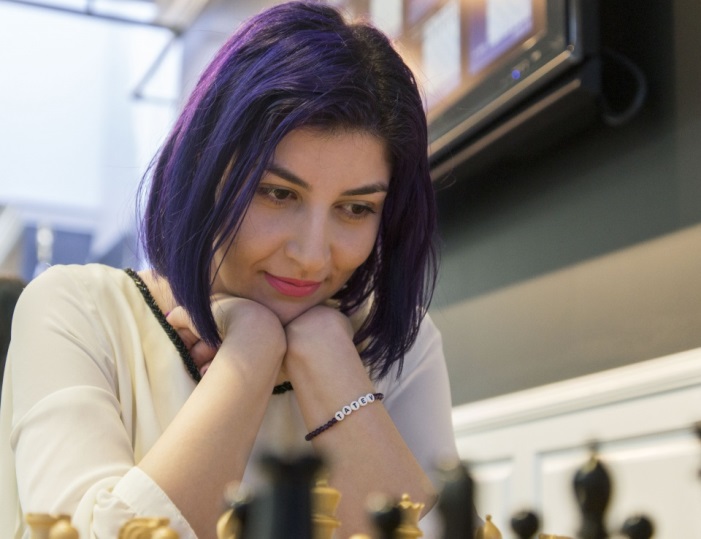 27-year-old Tatev Abrahamyan, who moved from Armenia to the US at the age of 13, came very close to inflicting a first defeat on Nazi Paikidze | photo: Lennart Ootes, official website

In fact Tatev Abrahamyan’s decision to take a draw by repetition a piece up against Paikidze was somewhat surprising:

The standings with three rounds to go are as follows:

Nemcova faces Paikidze in the penultimate round and then Krush in Sunday’s finale, so it couldn't be set up better for us chess fans. Meanwhile in the open event on Friday Nakamura can take a big stride towards overall victory if he can win with the white pieces against the always unpredictable Timur Gareev.