US Champs R6: Nakamura leads as So cracks

Round 6 was a bad day for the favourites at the US Championships. Hikaru Nakamura still leads but was unhappy with how he drew against Sam Shankland while Wesley So went down in flames against Ray Robson. We saw some “Soviet” endgame technique from Alexander Onischuk as he beat reigning champion Gata Kamsky, but also from 14-year-old Sam Sevian! In the women’s event Katerina Nemcova got mate on the board as she extended her lead to a full point.

Wesley So seemed a shadow of his usual confident self in Tuesday's game | photo: Lennart Ootes, official website

Wesley So still has a plus score at the US Championship, but his play has been uneven and two losses in six games have seen him drop down to no. 9 on the world ranking list. In Round 6 he came up against his friend and former Webster University teammate Ray Robson, who claimed he hadn’t exactly been out for blood:

I know how good of a player he is. I was just trying to play a normal game and be solid, because as White it’s going to be hard for him to hurt me.

Things soon got out of hand, though, with Robson summing up:

Obviously he’s the best player I’ve ever beaten in a tournament, so it’s a great feeling. I feel bad I kind of ruined his chances for the tournament, but overall I can’t complain with a win.

Jan Gustafsson takes a look at where it all went wrong for Wesley So:

And here’s the full interview with Ray Robson:

That win took 20-year-old Robson into second place and also meant that Hikaru Nakamura could rest easy as the sole leader despite what he considered a sub-par performance against Sam Shankland:

I played badly, I think. It’s not so much the moves are bad but the way I used my time.

In particular he condemned his 12.f4 as “kind of stupid”, sandwiched as it was between four moves that cost him 52 minutes.

When Shankland castled queenside next move it seemed as though we were in for a great Caro-Kann battle with opposite-side castling, but instead it fizzled out into a 31-move draw. 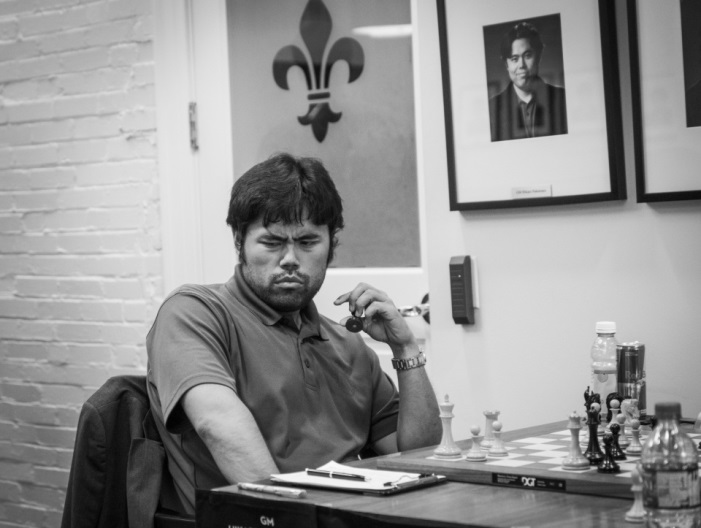 Hikaru Nakamura was as tough as ever on himself, but he still leads the tournament after having played his closest rivals | photo: Lennart Ootes, official website

As a bonus, and a reminder of happier times for Nakamura, we have Jan Gustafsson’s analysis of the American’s Round 5 victory in the Sicilian Dragon:

40-year-old Gata Kamsky had been more than holding his own against the young guns at this year’s US Championship, but he finally met his match against 39-year-old Alexander Onischuk. 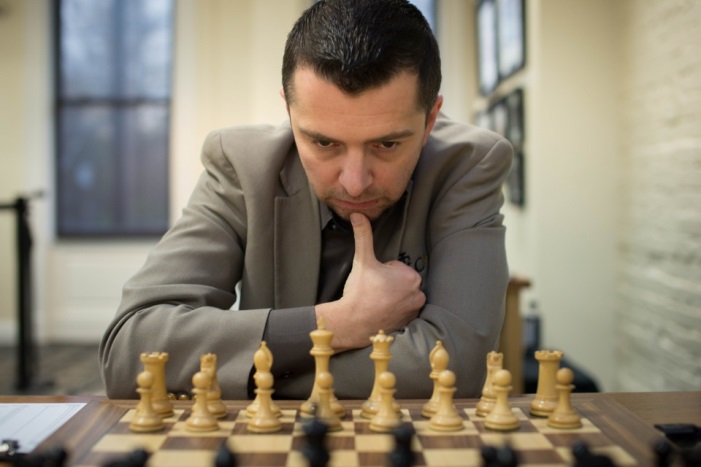 Onischuk finally makes his mark in the 2015 US Championship! | photo: official website

Gata was on the back foot from the start, but when the game reached a four-rook ending the odds on a draw increased. That was when Alexander got down to work, though, as he eventually managed to turn this tricky technical position…

…into a final position where the e-pawn clearly can’t be stopped. 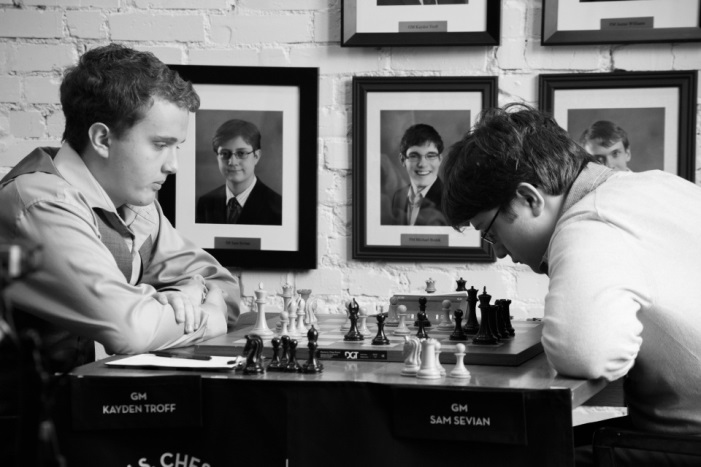 The 16-year-old got ground down in fine style by the 14-year-old | photo: official website

It’s not so long ago since 14-year-old Sam Sevian was just learning how to play. He told The Guardian in a recent interview:

I remember when I was just learning the moves, my dad was playing against me without a queen… he took out his queen, and he was beating me! I couldn’t imagine how one could win without a queen.

He seems to have grasped the concept now, and after a back-and-forth middlegame he managed to convert this position…

…with ruthless precision. With the computer counting down to mate-in-8 Kayden Troff decided it was time to call it a day.

The other decisive game saw Conrad Holt’s yo-yo tournament continue with a wild win over Varuzhan Akobian, who had winning chances himself before stumbling into a neat finish.

So the standings after 6 rounds are as follows:

The Women’s Championship was entertaining as ever, with Viktorija Ni commenting, “In women’s chess everything is possible!” Katerina Nemcova increased her lead by mating Jennifer Yu, who forgot it was possible to play the ending for more than pawns. 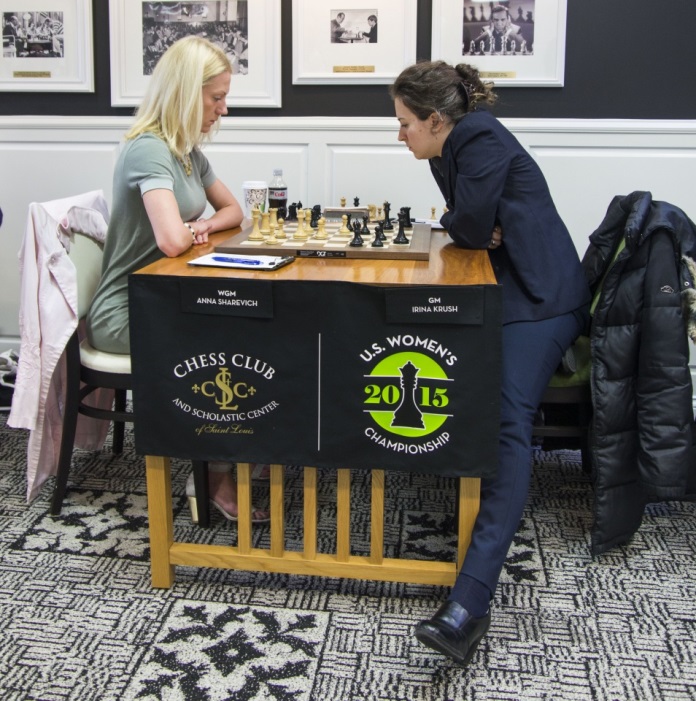 Irina Krush could have kept pace, but she allowed Anna Sharevich to pull off a miraculous escape. The final moment a win slipped away was after 42.Rxg6+?

As you can see in the video below, Anna decided “let’s use common sense” and went for what she thought was a forced draw. Irina believed her and played 42…hxg6 after 10 seconds (when she had plenty of time to think), but in fact there’s no draw after 42…Bg7, and the b-pawn should win Black the game.

Irina Krush was joined in second place by Rusudan Goletiani, who won a fine game that helped her to get over her disappointing loss to Krush on Easter Sunday. “Thank God we had a day off,” she commented, since it had been hard to take that she’d calculated the winning line against Irina Krush before playing something else.

Perhaps the win of the day, though, was Viktorija Ni’s victory over Alisa Melekhina. She shocked her opponent early on by punting a pawn with 5…Nd7:

It was neither a blunder nor over-the-board inspiration, though, since the 24-year-old had looked at it for hours with her husband and coach, GM Yury Shulman:

It’s kind of gambling, but taking all the factors like emotional, physical and psychological I think it’s a nice move and you have to think and choose the best moves in this position.

Gradually it all went wrong for Alisa, who fell into the kind of trap that would have been more at home in our Tactics Trainer:

28…Qxe5! was of course the winning shot, threatening to fork the queen and king with Nf3+. Alisa stumbled on with 29.Rfe1, but it was more than a flesh wound she was dealing with…

So the women’s standings are:

The big clash in Wednesday’s Round 7 will be Sevian – Nakamura, where the two players of the Championship so far meet. Can Sam pull off an even greater sensation by beating both of the tournament’s Top 10 players?