US Champs R5: Nakamura, So and Kamsky all win 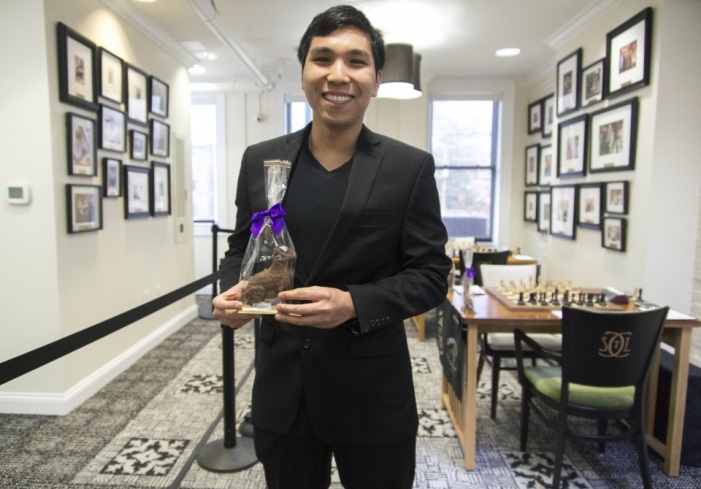 Wesley So poses proudly with his chocolate Easter bunny before taking a bite out of his opponent | photo: Lennart Ootes, official website

The players were gifted chocolate bunnies for Easter Sunday, but it was Hikaru Nakamura, Wesley So and Gata Kamsky who made their US Championship opponents look like rabbits caught in headlights with one-sided wins in Round 5. Kayden Troff added some unpredictability by pulling off a miraculous turnaround against Conrad Holt, while Irina Krush lived dangerously before moving within half a point of leader Katerina Nemcova in the women’s event.

After a very shaky two rounds, no. 1 seed Hikaru Nakamura beat Daniel Naroditsky to become the sole leader of the US Championship on 4/5, half a point ahead of Wesley So. He also regained the live no. 2 ranking from Fabiano Caruana.

Nakamura played the Dragon Sicilian and then went for the traditional exchange sacrifice on c3 at an unexpected moment:

14.Rxc3!? Nakamura himself admitted it was perhaps objectively losing, but he’d sensed weakness in his 19-year-old opponent, who started the day in bottom place after a miserable tournament so far. 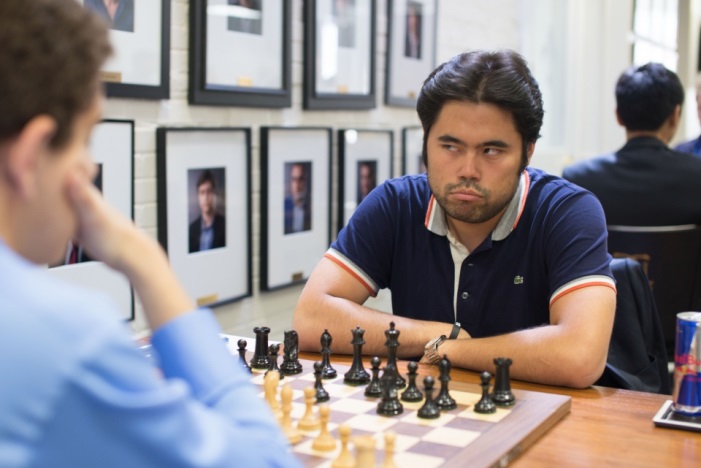 Sure enough, Hikaru had already gained an advantage before Naroditsky self-destructed with 28.e5?

After 28…dxe5 he was forced to give up an exchange with 29.Rxe5, since 29.Bxe5, perhaps his intention, simply loses on the spot to 29…Bh6, skewering the rook. The rest was easy for Nakamura, who talked to Maurice Ashley after the game:

Wesley So’s game was less dramatic. Timur Gareev tried to live up to his reputation for outrageous openings with an early h5 in the French Defence, but gradually lost one pawn and then another. 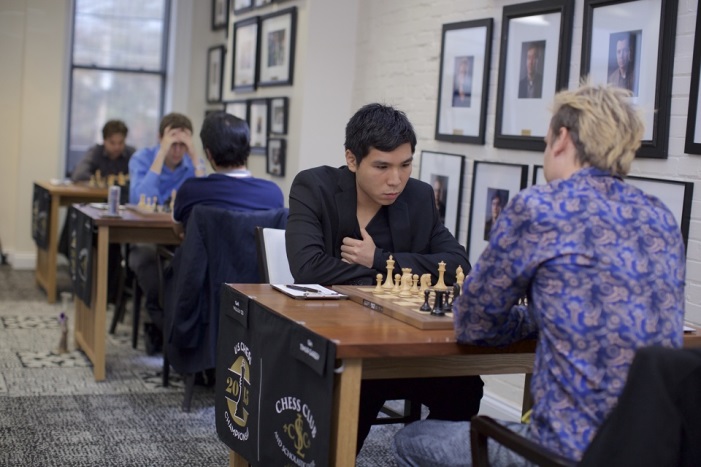 The most memorable moment of the whole game was the final position:

Wesley So is of course winning, but both queen and knight endings are tricky and the white pawns are scattered to the wind, so he was puzzled when after eight minutes’ thought Gareev came up to him and offered his hand. If you watch only one video from this round make it So’s interview where he explains that he’s a gentleman so he felt obliged to shake his opponent’s hand although he wasn’t sure if he’d get a 1 or a 1/2 on the scoresheet!

The other big hitter in the Championship is 40-year-old reigning champion Gata Kamsky, who seems to be building up momentum. His opponent, Ray Robson, had been flying high, but his position crumbled in time trouble:

Everything seems to be just about holding for Black, but the final move of the game, 38.Rxd8!, destroyed any illusions. After the only move 38…Qxd8 39.Nh5+! wins the house. 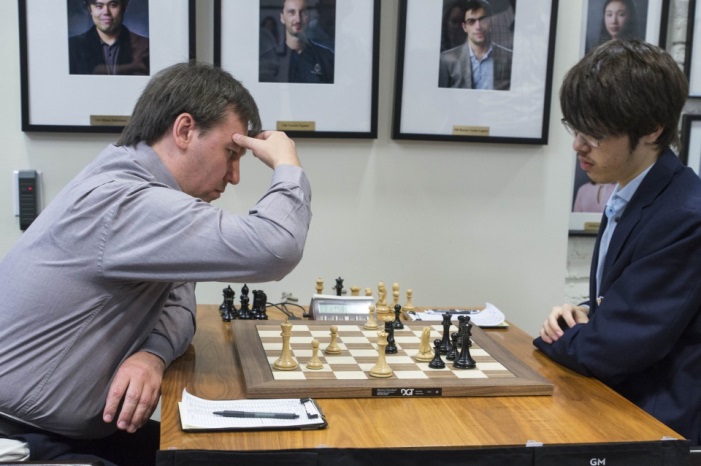 In his interview Gata made clear he still has chess ambitions, with his main goal in the tournament being to qualify for the World Cup in Baku later this year (there are five places up for grabs), since that’s a route to a possible World Championship match. He also talked about how one of the other games was simply too wild for him:

The game that had Gata scratching his head was Conrad Holt – Kayden Troff (don’t miss replaying it in our broadcast). 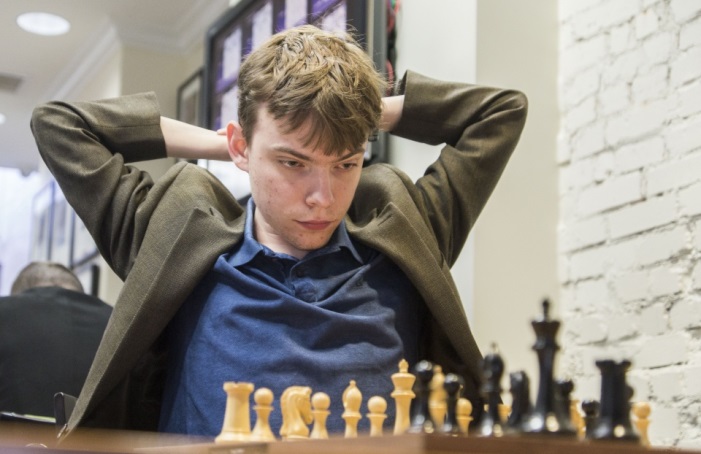 Conrad Holt was the unfortunate winner of the day's "find the worst move on the board" contest | photo: Lennart Ootes, official website

With the impetuousness of youth 16-year-old Troff went for a wild line since he couldn’t actually see a refutation. There was one – or in fact there were many – but if Troff had been less adventurous we’d have been denied a truly tragi-comic conclusion to the game:

Truly unfortunate for Holt, but Troff’s joy at realising he was suddenly winning is infectious!

The two remaining games were drawn, including another bold game by 14-year-old Sam Sevian, who had his similarly named 23-year-old opponent Sam Shankland sweating for a while. Shankland’s interview was another classic on a great day for the TV coverage, with his downbeat and funny assessment of his play so far combining nicely with the (enjoyably) over-the-top enthusiasm of the US broadcast. It included some great one-liners:

The standings at the midway point are as follows:

In the women’s event Katerina Nemcova continues to lead on 4/5 after a draw against Tatev Abrahayan, but 6-time Champion Irina Krush is now in sole second place after a crucial victory to leapfrog Rusudan Goletiani. 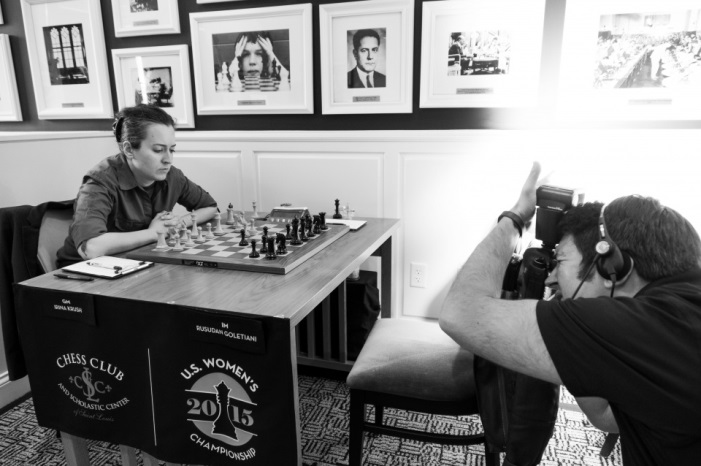 Can Irina Krush come back to win her fourth title in a row? | photo: Lennart Ootes, official website

It was anything but easy, with Irina admitting she’d relied too much on general principles when she allowed 19…Bxh3!. Rusudan was soon on top, but she got too clever with 22…Bxg2?, when she could in fact have taken the rook on e5:

Here 23.Rh5! Qxh5 24.Qd4+! turned the tables, although that was far from the end of the story, since Irina let her opponent equalise again before finally taking home the full point. Watch her description of the game:

So the standings in the women’s event are as follows:

On Tuesday night battle recommences in St. Louis, with the top young American hopes taking on the established stars in Nakamura – Shankland and Robson – So, the veterans facing off in Onischuk – Kamsky and the teenagers playing for bragging rights in Troff – Sevian. Don’t miss it!