If midway through Round 3 of the 2015 US Championship you’d said Samuel Sevian would have a forced mate against Wesley So and Hikaru Nakamura would take a draw material down against Gata Kamsky few would have believed you. The leaders looked on course for 3/3 and climbing ever higher on the rating lists, but were both brought down to earth with a bump. Irina Krush also has a fight on her hands, after she lost her first game in four US Championships, to her closest rival, Nazi Paikidze. 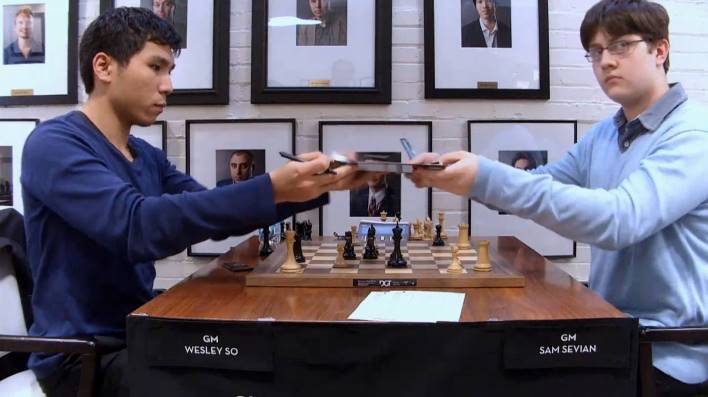 Sevian turns to face the camera after defeating the world no. 5!

“Sevian: It feels great to beat someone so high rated”

Sam Sevian was born in Corning, New York, to Armenian parents, leading Levon Aronian to quip last year in St. Louis, “He has good genes!” The youngster’s chess rise has been much more prodigious than that of the Armenian no. 1 himself. Sam won the World U12 Youth Championship in 2012 and became the youngest ever US Grandmaster at the age of 13 years, 10 months and 27 days. Nevertheless, nothing quite matches what he did on Friday in St. Louis. 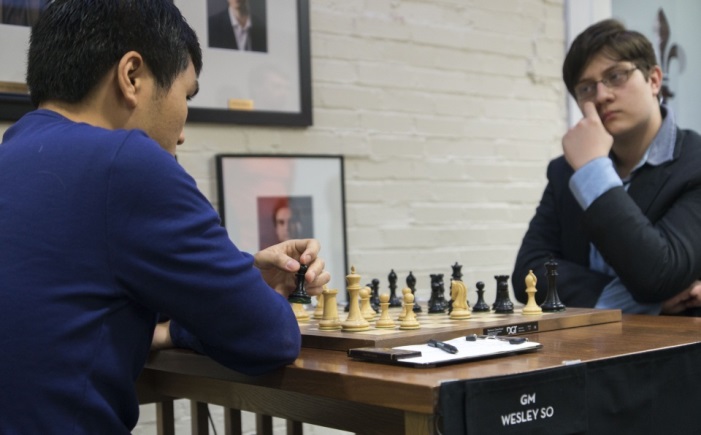 It's not only towards the camera that Sevian turns a withering gaze | photo: Lennart Ootes, official website

We’d already seen how fearless Sevian was against Kamsky the day before, but playing the same 12…c5 that Anand had famously used to beat Aronian in Wijk aan Zee in 2013 was asking for trouble, especially against a man who had just climbed to no. 5 on the world rating list. Wesley So blitzed out 13.Bxh7+ (not Aronian’s 13.Nxh7) and kept blitzing for another few moves, while Sevian was already deep in thought.

I probably didn't analyse the opening too deeply. It was a mistake going for such a dangerous line without knowing all the subtleties.

Nevertheless, the computer gave him a big edge and thought he was close to winning on move 17:

Here, after his first relatively long think of the game, So went for 17.Qxg6, allowing Sevian to retreat the d6-bishop on the next move. Instead 17.Nxd6! first would have eliminated one of So’s later tormentors.

As the game went White was still on top, but it was incredibly sharp, with everything hanging on a single tempo. The Philippine star was the first to falter, and although it was arguably his only real mistake of the game it was immediately fatal:

White had to play 25.Qh3!, when White has the huge threat of Nc6 (or Ne6 if the black queen takes on g5), hitting the queen and also opening the path for the b2-bishop. Instead, after So’s 25.Qh5? Qxg5+ there was no holding back the reign of terror of the black minor pieces.

So graciously gave an interview to Maurice Ashley after the game, where he talked about his opponent's style, though Maurice wondered how a 14-year-old can already have a style. The "veteran" Wesley explained:

They're born with the computers. I first started using computers when I was 10, he was probably 6.

Yesterday Ray told me Sam Sevian is very good at mating people, and today he proved it.

Indeed, the final position was mate-in-6!

You can watch the full interview below:

It feels great to beat someone so high related. I tried not to focus on who I'm playing and just clean my mind. 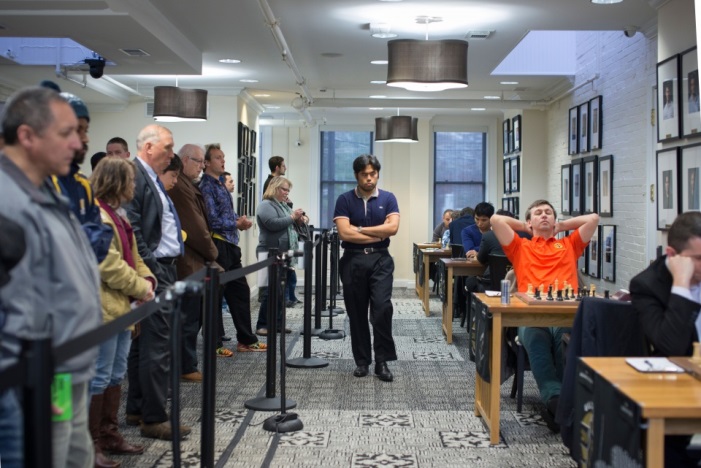 What about this for body language! Kamsky stretches as Nakamura walks to the board | photo: official website

Reigning Champion Gata Kamsky was fully aware that he’d dodged a bullet against Hikaru Nakamura. He admitted to being surprised as early as move two and soon slipped into a grim position:

I was just completely outplayed. For the last 20 moves I was just shuffling around pieces and waiting for him to finish me off.

Then there was a moment of inspiration, with Kamsky “really proud” that he saw 55.Nf7:

The point, and it was one that convinced both players, was that a move like 55…Qf3 would run into the beautiful forced sequence 56.Nxh6+ Kg7 57.Rd7+ Be7 (or mate on h7) 58.Rxe7+ Kf8 59.Rf7+ Ke8 60.Bg6! when White wins. Black could have played 55…Qc6 (or indeed a few more moves according to the computer) and still have a winning edge, but Nakamura jettisoned his queen with 55…Rxc2?. Perhaps he’d missed another beautiful saving resource, and this time one with no flaw: 57.Qb1!

If the rook moves 58.Qg6+! wouldn’t end well for Black. A disgusted Nakamura, who instead of climbing towards Carlsen dropped back down below Caruana to world no. 3, quickly left the building. Gata stayed to chat with Maurice Ashley, and felt that after a rusty start he was getting his form back:

Elsewhere there were another three draws, but Ray Robson beat Conrad Holt to join Nakamura in the lead on 2.5/3.

Colt, who has clearly chosen to live and die by the sword in this tournament, has just played 16.h5, but although the attack looks spectacular Ray Robson soon launched a successful counterattack and won in 36 moves. 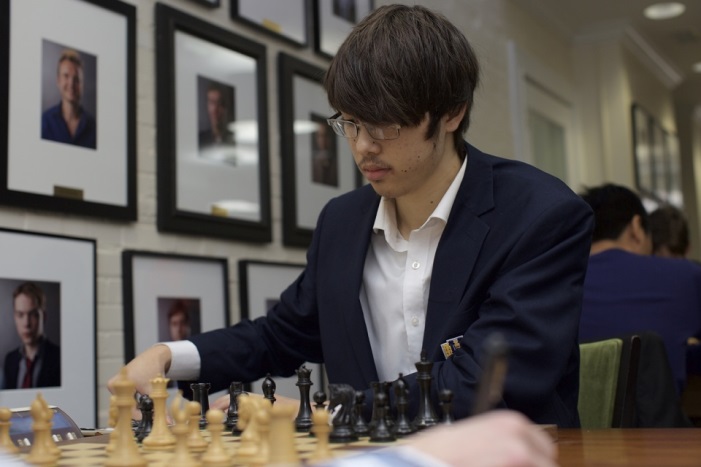 Behind the leaders Wesley So is alone on 2 points, while Sam Sevian and Gata Kamsky are among a group of 5 players on 1.5/3.

All good things come to an end 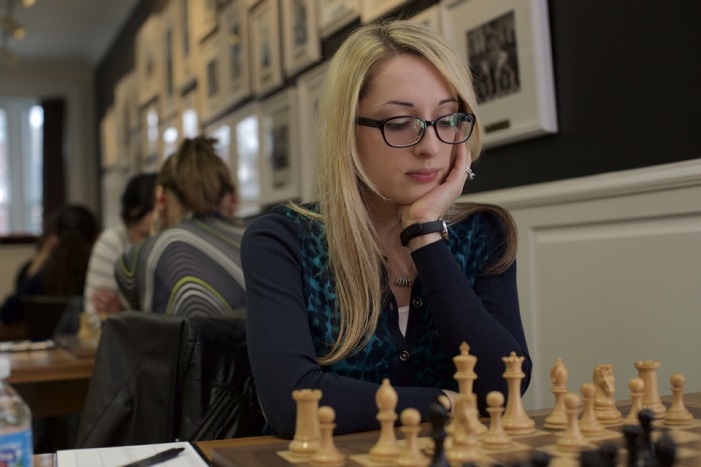 The women’s tournament again saw only a single draw in six games, and featured one game which, though not exactly an upset, was still a sensational result. Second-seed Nazi Paikidze beat 6-time Champion Irina Krush, who last lost a US Championship game back in 2011. Her record since then:

The game was a dazzling attacking effort from Paikidze:

Here she played the powerful temporary piece sac 20.Nxe5! and after 20…Nxe5 she followed up with 21.f4! The rolling pawns are so threatening Krush chose to give back the piece immediately with 21…Qd7, but couldn’t stop the flood. In the final position it’s again pawns that emphasise White’s complete dominance:

Afterwards it was perhaps an understatement when Paikidze commented: “I think I played quite well today.” Watch the full interview:

Paikidze is now on 2/3, in sole third place behind Rusudan Goletiani and Katerina Nemcova on 2.5/3, while Krush is among 5 players on 1.5/3. With 11 rounds in this championship, though, there’s still a lot of room for the 6-time champion to mount a comeback. 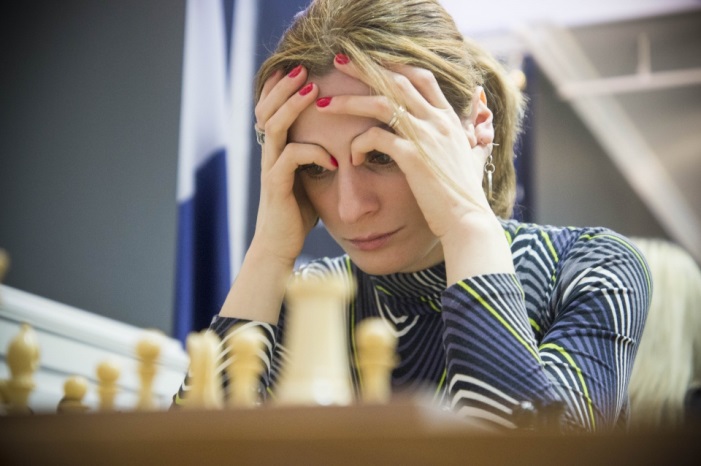 IM Rusudan Goletani is co-leader. She also grew up in Georgia (the country, not the state), but transferred to the US all the way back in 2000 and won the US Women's Championship in 2005 | photo: Lennart Ootes, official website

On Saturday all eyes will be on the most eagerly-awaited clash of the whole 2015 US Championship, Nakamura – So. Don’t miss it!