Ray Robson survived some more time-trouble madness to defeat Daniel Naroditsky and join Hikaru Nakamura in the lead on 5/7 with four rounds of the 2015 US Championship to go. 14-year-old Sam Sevian impressed again to hold Nakamura to a draw, but all the other open games finished decisively, with Wesley So and Gata Kamsky winning to stay in the hunt. In the women’s event Irina Krush remains in second place behind Katerina Nemcova despite missing the easiest of wins on move 12. 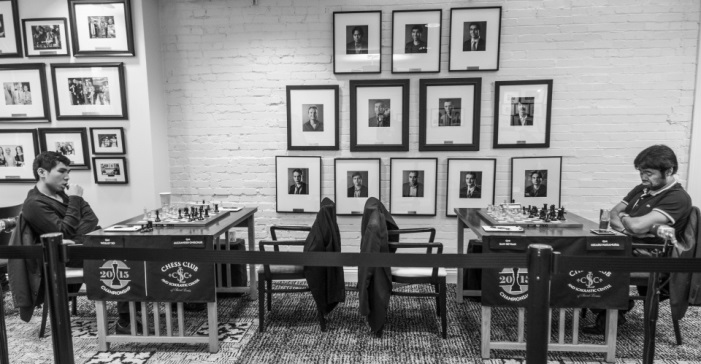 The 2015 US Championship was expected to be all about Wesley So and Hikaru Nakamura, but they're not having things all their own way so far | photo: Lennart Ootes, official website

Sam Sevian’s seemingly inevitable climb towards the top of world chess continues unabated. After already beating one Top 10 player, Wesley So, he held his nerve to comfortably hold a difficult Anti-Berlin position against world no. 3 Hikaru Nakamura. 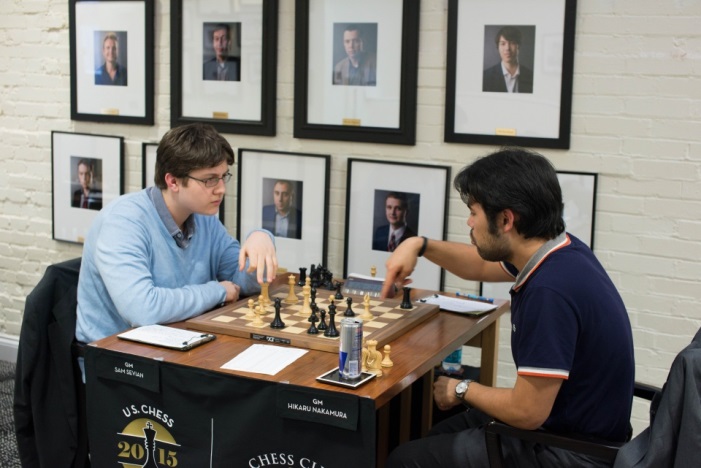 Sam Sevian wasn't overawed by Hikaru Nakamura, either during or after the game | photo: official website

He’s playing really well for his age… He’s gaining a lot of rating here so he won’t be underrated soon!

Wesley’s own time as a prodigy may have come to an end, but he knows all there is to know about fighting for what you want. After a tough couple of losses and a tournament experience that he even described as “this time of desperation” he got back on track with a sharp win over Alexander Onischuk. Wesley started pushing pawns on the kingside and it suddenly became fiendishly difficult for Black:

Wesley is now only half a point behind Nakamura and summed up his goals for the rest of the tournament:

I’ve just got to avoid self-destructing and ignore the critics. In the chess world there are some people who want to see the top players fail and you’ve just got to ignore that fact and focus on your opponents.

Don’t miss another fascinating interview with the Philippine star:

Gata Kamsky also bounced back from a loss, explaining what had gone wrong the day before:

That’s what happens when you play for a draw – I was playing for a draw with Black and trying to be solid.

Playing solidly is perhaps the last thing Conrad Holt can be accused of, but against Kamsky he must have thought that when he offered a queen exchange that would also repair his pawn structure his drawing chances would be excellent:

I saw this endgame with the two bishops and his king cut off from the queenside and I thought it was very unpleasant for Black to play.

So it proved, and the world no. 2 (at the moment of writing!) Fabiano Caruana was struck by the virtuoso display that followed:

In the final position material is still equal, but without rooks the black pawns are about to fall:

Gata Kamsky has often given the impression of finding playing chess a painful experience – he even gave up the game for eight years when he’d reached the very top at the age of only 22 (as you can read in our player profile) – but his press conferences in Saint Louis have been great fun, and his attitude has been unrecognisable from his reputation. After Round 7 he commented:

I’m having a lot of fun. I don’t care how I play! One game win, one game lose, it doesn’t matter. The most important thing is to have fun and play chess... I can’t recall enjoying it this much for the last few years… Let’s bring it on!

There were also wins for Kayden Troff over Varuzhan Akobian and Sam Shankland over Timur Gareev (whose Schliemann Gambit - 1.e4 e5 2.Nf3 Nc6 3.Bb5 f5!? - brought him no joy) but the most dramatic game of the day was Ray Robson’s win over Daniel Naroditsky. By the standards of this year’s US Championship it was actually quite a smooth win, though with a big lapse from Robson when he played 53…f3? in an absolutely winning position:

54.g4! suddenly made it all to play for and Naroditsky briefly had a draw in his grasp, but the game ended logically with a black win after 85 moves. What made it all much more dramatic, though, was Ray Robson’s time handling. Wesley So had commented about his loss to Robson the day before:

He made one of his moves with two seconds left, so that was fortunate for him.

Though So later added:

This time Robson got down to one second, but he still pulled off a win. Afterwards he talked to Maurice Ashley:

Naroditsky, who has only 1.5/7, was desolate at moments during and then after the game, as perfectly captured by Lennart Ootes (for more photos see the official website): 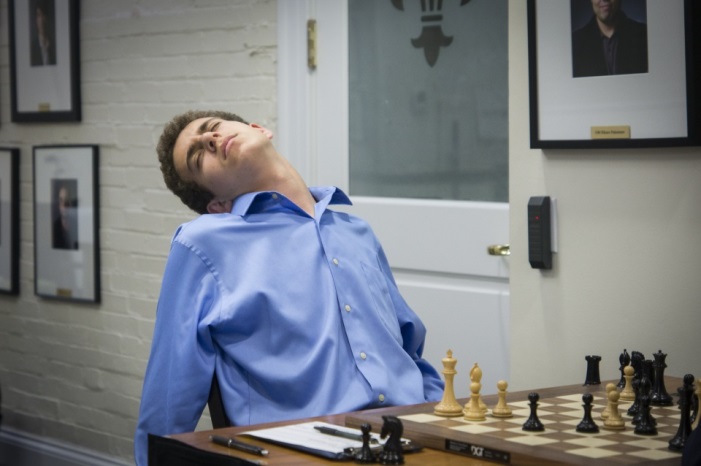 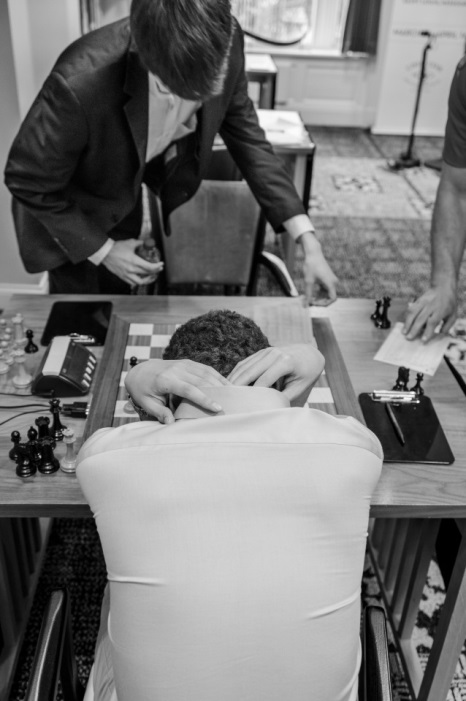 The standings have tightened again, with six players within a single point of the lead with four rounds to go.

Former Czech Champion Katerina Nemcova’s amazing run at the US Women’s Championship continues, with her score now including five wins and two draws. 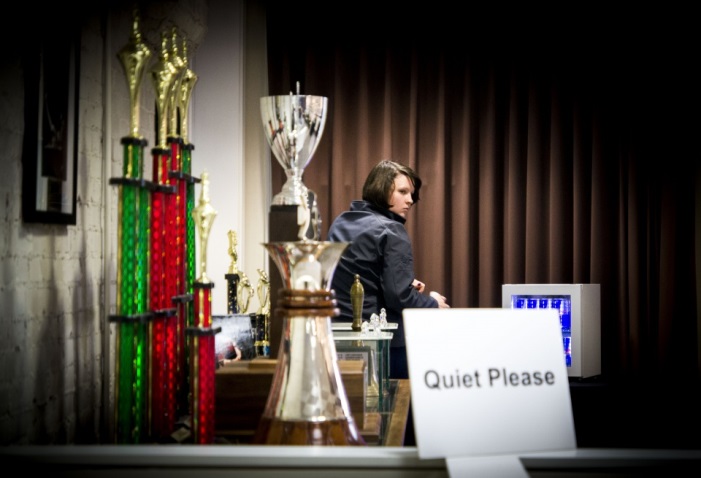 Katerina is yet to play her top rivals, but she looks set to go into the games only needing a draw | photo: Lennart Ootes, official website

In Round 7 she was struggling to break through against Apurva Virkud, but finally managed with a bold exchange sacrifice to seize the 7th rank:

Nazi Paikidze is the only other unbeaten player in the women’s event, though her pace had slackened with three draws following her great win over Irina Krush. She got back on track on Wednesday with a win over Alisa Melekhina, who again went down in flames. 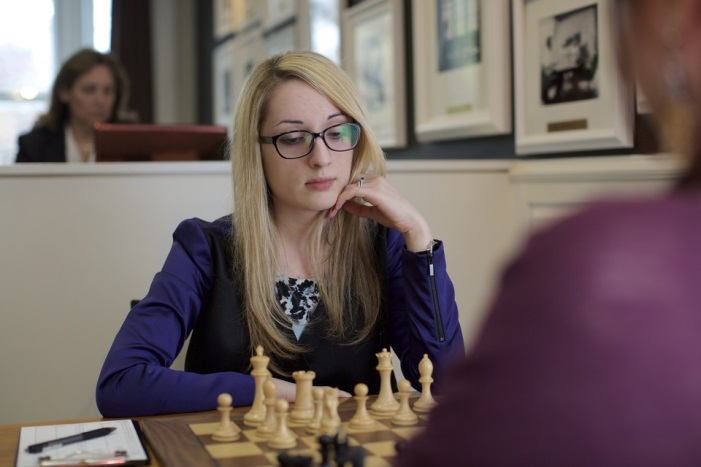 Paikidze has been a model of composure during her first appearance in the US Championships | photo: Spectrum, official website

Paikidze is 1.5 points off the lead, while Irina Krush is only a single point behind, though her win against Annie Wang wasn’t exactly her finest hour:

Here Irina was happy that Black hadn’t taken with the queen since her structural edge was going to be even greater with queens on the board. She therefore quickly played 12.Nf3?, which would indeed be a good move if not for the fact that 12.Qh5+ picks up the bishop on c5 using one of the simplest tactics in the book!

Watch Irina put on a very brave face about that oversight at the start of her conversation with Maurice Ashley:

So the standings at the top of the women’s event are much more spread out than in the open:

On Thursday Krush will no doubt try to cut the gap against Melekhina, while in the open event Ray Robson has White against Sam Shankland, while Nakamura, So and Kamsky all have the black pieces against lower-rated opposition.


Follow all the action live here on chess24 from 20:00 CEST. You can also watch the games on our free mobile apps: