Fabiano Caruana’s dream start to his first US Chess Championship continued as he pressed Wesley So hard with Black in Round 3 and then beat Hikaru Nakamura with ease in Round 4 to take the sole lead. That win also took Fabiano above Vladimir Kramnik into the no. 2 spot on the world rating list and, as we found out in another unusual post-game interview, things seem to be going well for the Italian-American off the board as well. 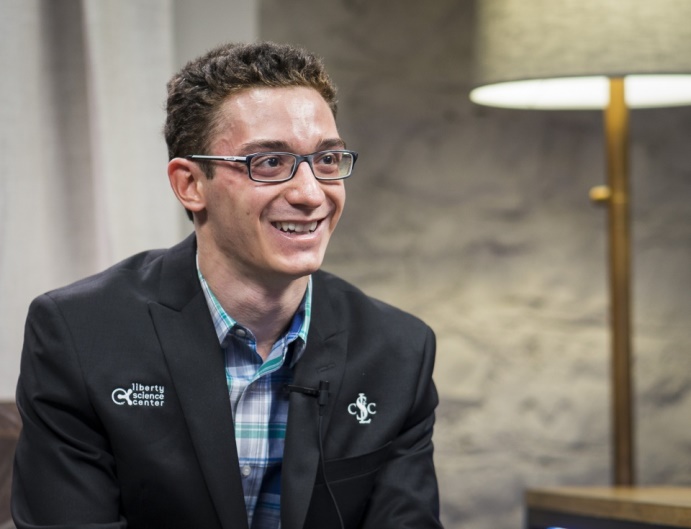 We've witnessed a new Fabiano Caruana away from the board in St. Louis | photo: Lennart Ootes, St. Louis Chess Club

First, let’s add a soundtrack for this report, Santana’s Smooth:

In Round 3 Fabiano faced his first big test of the 2016 US Chess Championship – Black against Wesley So. Caruana accepted a risky early pawn grab, but was later able to give the pawn back for a slight advantage. He then channelled his inner Carlsen to press on until move 92, including 20 moves with a bare rook vs. bishop, before ending the game in stalemate.

Replay all the games so far from the 2016 US Championship

That long game might not seem like the ideal preparation to play Hikaru Nakamura in Round 4, but it was the reigning Champion who was undone by his previous games. Nakamura had been held to a very quick draw by Gata Kamsky in Round 2 and his frustration increased when he failed to get anything against 16-year-old Akshat Chandra in Round 3. Nakamura later commented:

Basically, to put it simply, it’s the second tournament in a row that I’ve had Black against Caruana in an unfavourable tournament situation. I decided I had to do something today.

Hikaru played the Najdorf, an early h5 and achieved a very sharp and interesting position. 18.f5 instead of 18.e5 is the only move of Caruana’s that could be criticised, but it led to Nakamura giving up the exchange. 21…Kb8 was described as “a very good move” by Fabiano:

And now, after barely pausing for thought, Caruana unleashed the killer blow 27.Ra3! and the game was, essentially, over. The a4-bishop can’t retreat due to the threat of Rb3 (or Qb6! if the bishop goes to b5) and there’s no way to stop c3 and then b3, simply winning a piece for no compensation. 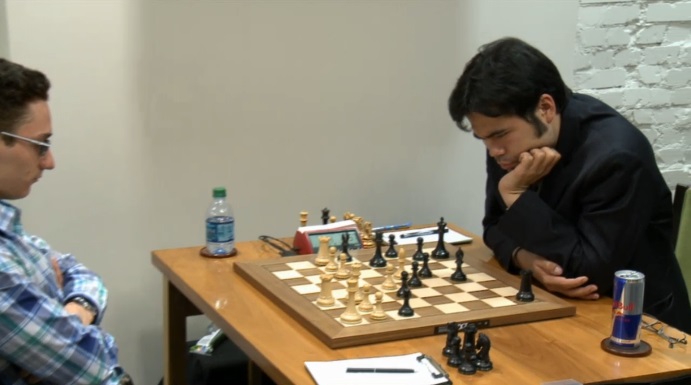 Nakamura knows it's over 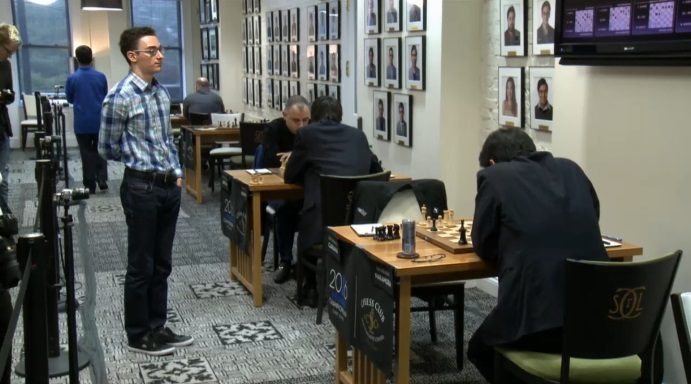 Caruana was low on time, but he could already relax... and prepare his post-game comments

I think that Hikaru had just a very off day, today. He had a probably good position and slowly – or quickly – messed it up.

But the post-game interview with Maurice Ashley will live on for other reasons. We’d already had Caruana declare his love for his manager, describe moves as “bespoke” and “creamy”, and now again the interview veered off its normal chess course:

Caruana: So far everything’s going pretty smoothly… I would say very smoothly, like the ocean under the moon!

Ashley: Your romantic side's coming out. Please don’t tell us about your undying love for Lawrence Trent again!

No, that’s actually a favourite song of a very close friend of mine.

Is this the Alexandra? Do you want to tell us about Alexandra? What’s her last name?

Oh, now we get specifics.

The majority of the watching chess internet no doubt took to Google at that moment, while Lawrence could breathe a sigh of relief, as Fabiano later added, “I have enough love in my heart for him as well!”

You can find this part of the interview at about 03:24:00 during the live show:

The win over Nakamura was a big step towards confirming Caruana’s status as US no. 1, gave him the sole lead on 3.5/4 in the tournament, and also took him up to 2805.3 on the live rating list, reclaiming the world no. 2 spot from Vladimir Kramnik.

With a bit more maturity and a bit more development he can actually become unplayable. He plays any position and he calculates better than anyone else in the business.

This is the great news! Out of all the top players, who are the top players who can genuinely make Carlsen not look like a World Champion on occasion?

Of course Fabiano was the man he had in mind, and on this form it’s hard to deny Caruana’s huge potential. For now, though, he merely leads the US Championship by half a point, with seven rounds still to play:

Apart from Caruana the action wasn’t spectacular in Rounds 3 and 4 of the main event, with Sam Shankland and Alexander Onishchuk scoring the only other wins (both on the back of defeats). The latter’s win deserves a mention, though, for one of the most beautiful moves never played:

Aleksandr Lenderman has just played 23…Qb6, which allowed the exquisite 24.Re6!!, when 24…fxe6 runs into 25.Bf8 mate, while 24…Qxb5 again allows 25.Bf8+, this time picking up the queen. Instead Onischuk went for 24.Rxd4 Qxd4 25.Bc3, a nice line that forced a winning ending, but not one that will feature in chess books except as a missed opportunity. 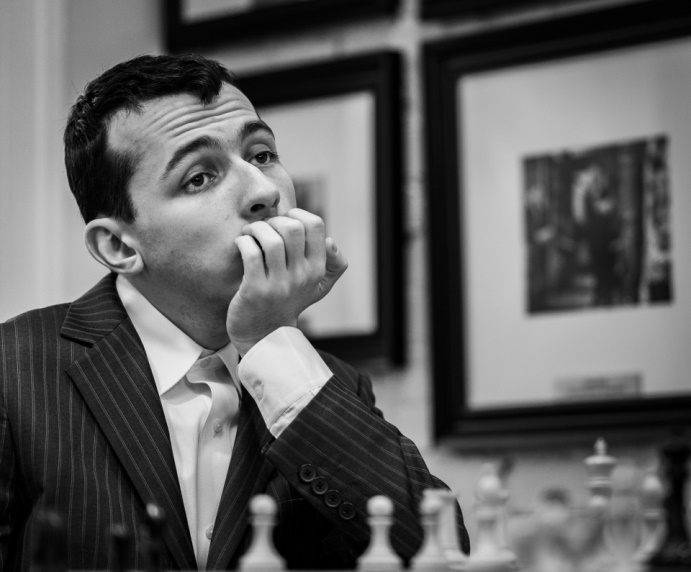 Lenderman still lost the game, but it could be considered a lucky escape... | photo: Lennart Ootes, St. Louis Chess Club

In the women’s event, meanwhile, the favourites are beginning to exert themselves, with 12-year-old Carissa Yip finally knocked off the lead after a loss in Round 4.

Defending Champion Irina Krush is back in front with Nazi Paikidze (unbeaten in two US Championships in a row) and Tatev Abrahamyan, though if Irina does go on to win again she’ll look back at her Round 2 game with a wry smile:

Alisa Melekhina had totally outplayed Irina and safely navigated all the last tricks… until now. 39.f6?? instantly threw away the whole advantage. Alisa had overlooked 39…Rxd6!, when neither white pawn is queening.

Alisa then went on to lose to Anna Zatonskih in the following round, leaving just half a point between arch-rivals Anna and Irina before they clash in Round 5:

Tune in for Round 5 at the same time on Monday 18 April, when the US Championships will be following the opening blitz of the 2016 Norway Chess Supertournament! You can also watch the games in our free mobile apps: