Wesley So and Jeffery Xiong took advantage of a shaky start by maverick Timur Gareyev to grab two of only three wins in the first two rounds of the 2019 US Chess Championship. The other winner was 18-year-old Sam Sevian, who continued his excellent form from the World Team Championship to overcome stiff resistance from the youngest player in the field, Awonder Liang. In the Women’s Championship Carissa Yip and Jennifer Yu lead, with Carissa benefiting from Akshita Gorti resigning a position where she stood no worse. 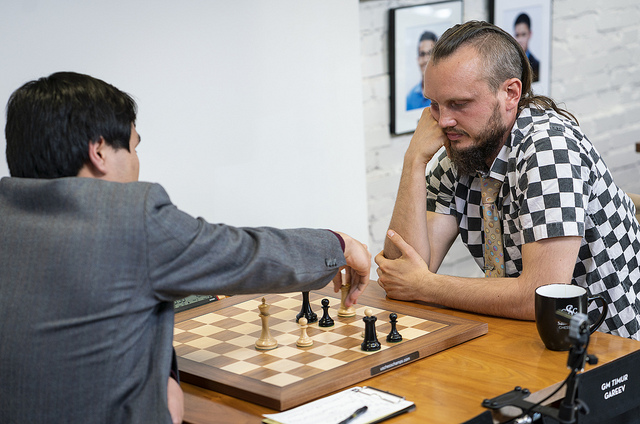 You can replay all the games from the open section of the 2019 US Chess Championships using the selector below:

The main event of the US Chess Championship got off to a slow start on Wednesday, with 11 of the 12 players seeing their chances of winning the $64,000 Bobby Fischer prize for an 11/11 winning streak go up in smoke. The draws included the big clash between Hikaru Nakamura and Wesley So and also Fabiano Caruana against Sam Sevian choosing to play the black side of the Sveshnikov he championed with White against Magnus Carlsen in their World Championship match. 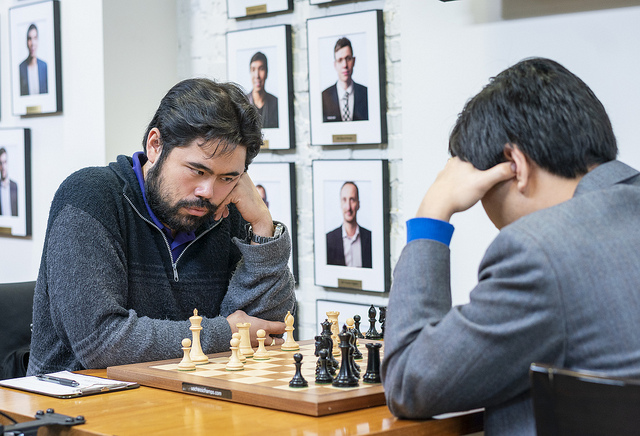 Liang-Lenderman was a wild encounter that eventually ended with Alex Lenderman frustrated in 120 moves, but the ice was broken by Jeffery Xiong… or perhaps we could say by Timur Gareyev. 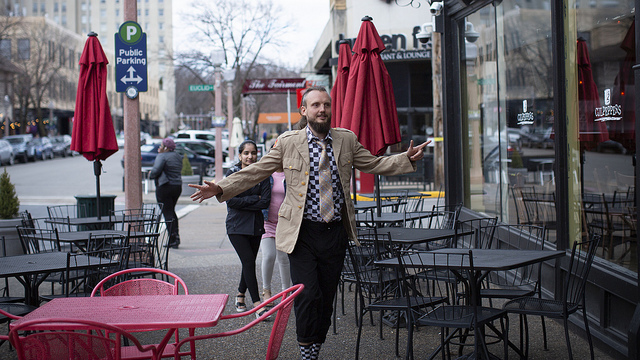 The lowest rated player in the field was always the most likely to entertain the crowd, but spending 20 minutes on 6.g4!? and then 39 minutes on 8.Bb2, a move he later admitted he could just as easily have played instantly, was asking for trouble. White’s position had its trumps – more space and the bishop pair – but in time trouble Gareyev lost the thread when former World Junior Champion Xiong began to ask uncomfortable questions with 19…a5! 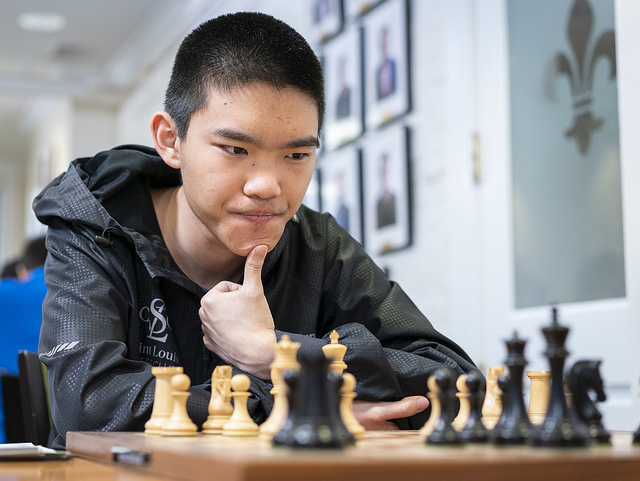 18-year-old Jeffery Xiong followed victory in the Spring Chess Classic in Saint Louis with a first round win in the US Championship in the same venue | photo: Lennart Ootes, official website

In Round 2 at one point it looked like we might get no decisive games. Lenderman-Nakamura fizzled out in 30 moves, Varuzhan Akobian survived desperate time trouble against Xiong, Leinier Dominguez mistimed a g6-stab against Shankland and we could have been reduced to only discussing the aesthetics of the bishop dance in Caruana-Robson. 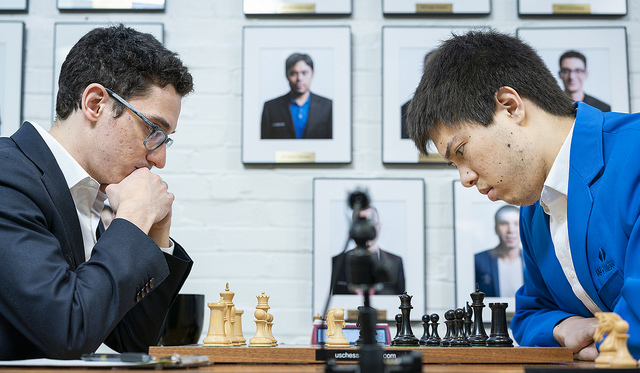 Ray Robson gave as good as he got against Fabiano Caruana | photo: Lennart Ootes, official website

Do you prefer them all lined up on a file...

The other two games seemed as though they would fizzle out as well. Sevian had missed some killer blows against Awonder Liang and ended up with only an extra pawn in the ending:

After 56…Bxd6 57.exd6 Rxd6 the active black rook (and the weak h4-pawn) would have given Black excellent drawing chances, while after Awonder Liang’s 56…Rc2? 57.Rc4! Rd2 58.Ne8+ (giving no second chance to simplify) White was winning. The c-pawn soon made a triumphant dash up the board, and although Awonder queened his own f-pawn it was at the expense of a rook. When the checks ran out Black had to resign: 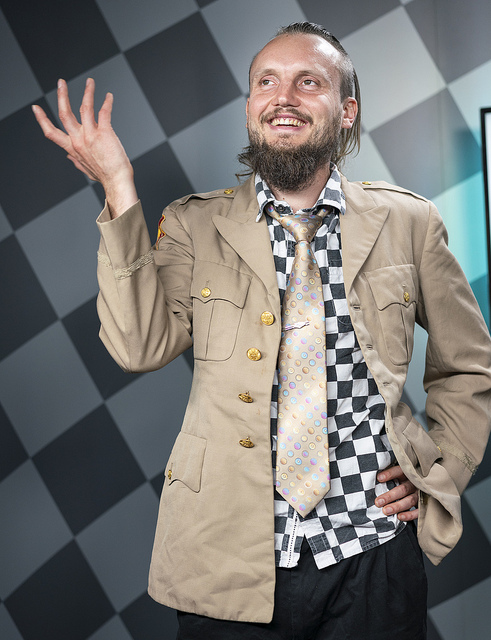 In the other decisive game Timur Gareyev this time played the middlegame impressively to equalise the position, but Wesley So went for one last try:

With the king a file further away from the g6-pawn Wesley was able to land a blow he spent 16 minutes checking: 51.Rd7+! Kxd7 52.g7! and the pawn couldn’t be stopped. The ensuing queen vs. rook ending had the potential to be tricky, but Wesley smoothly converted his advantage. He even got to deliver mate: 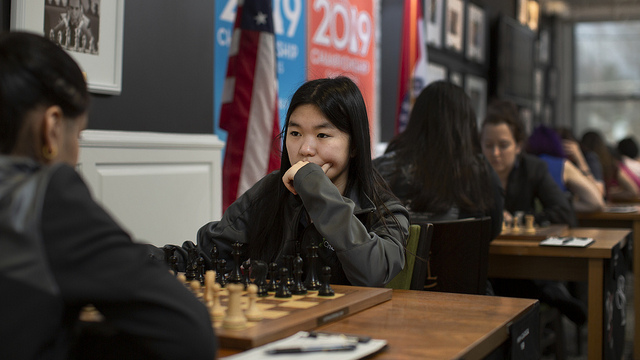 The youngsters are out in force in the US Women’s Championship and it’s two of them, 15-year-old Carissa Yip and 17-year-old Jennifer Yu, who lead with a perfect 2/2 after the first two rounds. You can replay all the games below:

Carissa’s natural optimism has been rewarded with some good fortune as well. In Round 1 2017 US Women’s Champion Sabina Foisor picked the wrong square for her king on move 40 and instead of escaping with a draw found herself losing a rook by force. Then in Round 2 Carissa realised just too late that she’d blundered away her advantage when playing 22…Bh3?! and that after 23.e5 Bf5 her opponent had a chance to rescue half a point:

As you can see, though, Akshita Gorti instead simply resigned. That was perfectly understandable, since 24.Qc1 Bxb1 looks hopeless (25.Qxb1 Rxd2), but in fact after 25.Bf3! there it’s White who’s on top! 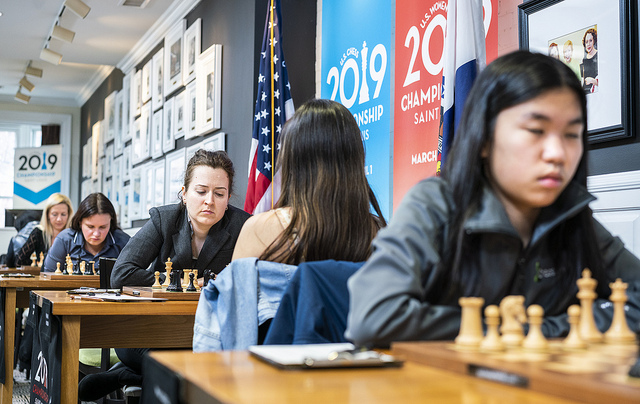 Top seeds Irina Krush and Anna Zatonskih are among those just half a point back, with Irina needing to find one of the moves of the event to turn around a bad position against Emily Nguyen in the first round. 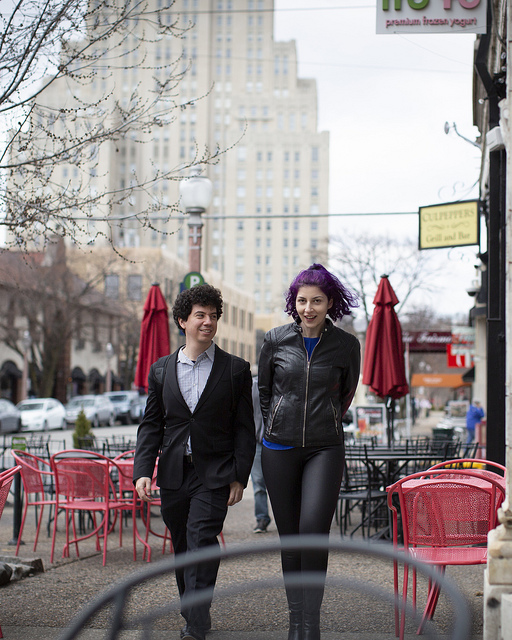 Tatev Abrahamyan started with 0.5/2, but if you're filming a new superhero franchise and want a chess player to star in it look no further! | photo: Justin Kellar, official website