Figures released today reveal more than 6,000 casual and serious chess players turned up to London’s iconic Trafalgar Square for ChessFest — making it one of the UK's biggest ever chess events.

The event, held last Sunday, was billed as an extravaganza of live chess games with actors, grandmaster simuls, mass teach-ins and video shows.

It was such a success the organiser, Chess in Schools and Communities, has announced they would like to make it a fixture on the chess calendar. 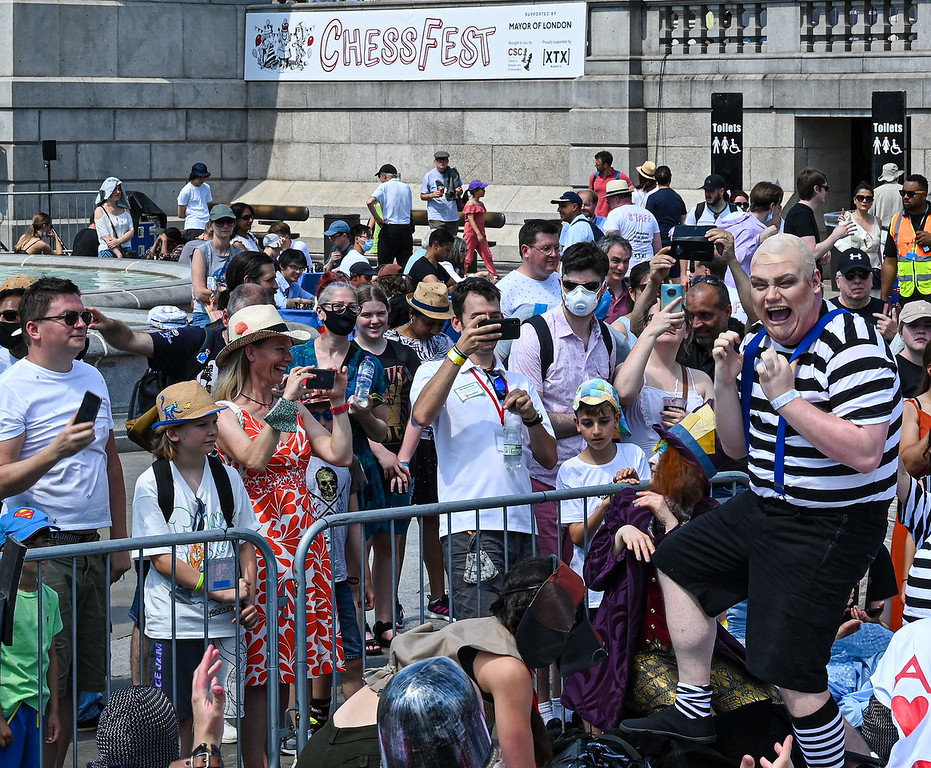 For seven hours, Trafalgar Square was taken over by every variety of casual and fun chess, with the UK capital’s biggest public square full to its 750 capacity. Queues of chess fans also formed waiting to get in.

Amid temperatures that reached higher than 30C — the UK's hottest day of the year thus far — chess fans and their families and friends watched a live performance by actors of the "Immortal" Anderssen-Kieseritsky Game of 1851, which many believe was played just a couple of blocks away from Trafalgar Square, in the famous 19th century chess salon Simpson’s in the Strand. 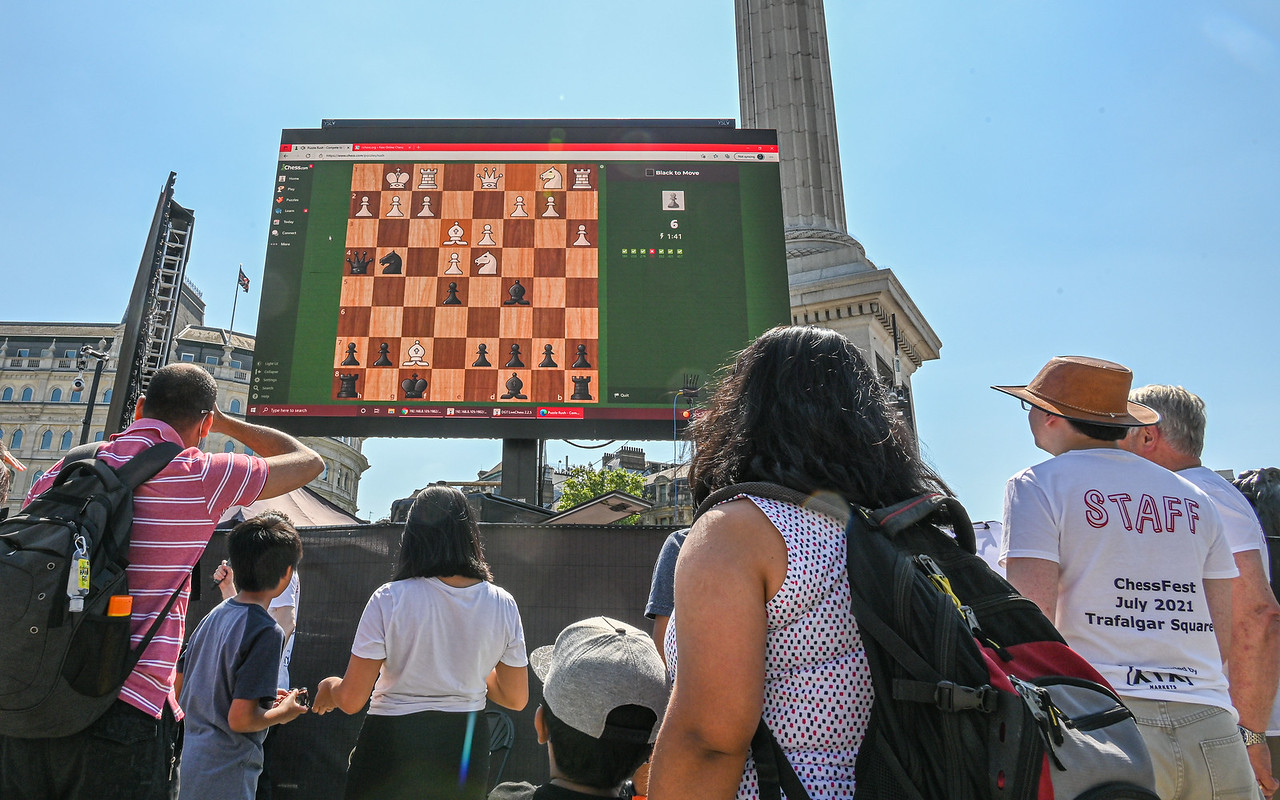 Shreyas vs Tani on the big screen

Also adding to the fun were continuous simuls, where tag-teams of grandmasters and other leading players, including top English GMs Mickey Adams, Gawain Jones and Luke McShane, took on all-comers in the sun-drenched square.

On nearby giant chess sets, friends played each other, while impromptu teach-ins by professional chess tutors were underway in a tented teaching zone, and a casual chess zone saw hundreds of players playing friends and strangers with clocks alike with equal gusto.

The organisers say they are keen to make it a regular event each summer, with Chess in Schools and Communities CEO Malcolm Pein tweeting afterwards:

The live games were performed on a giant board by 32 professional actors from the theatrical troupe ‘Bearded Kitten,’ with the theme of commemorating the 150th anniversary of the children’s classic ‘Alice Through the Looking-Glass.’

As characters from the Lewis Carroll story including Alice, the Red Queen, Tweedledum & Tweedledee strutted their stuff on the giant chessboard, adding drama and pathos to the occasion, GM Daniel King commented on the chess action.

Woody gets it right!

The first move in Anderssen-Kieseritsky was ceremonially played by the Hollywood actor Woody Harrelson, who sent a video welcome message to ChessFest visitors, announcing that his first move would be 1.e4. (Unlike in the first game of the 2018 World Championship match, where he played a practical joke, 1.d4, after Fabiano Caruana asked for the e-pawn to be pushed.)

Battle of the Prodigies

Also adding to the spectacle was a match between teams of Liverpool and London schoolchildren, with the Liverpool team tuning in from their own ChessFest from a city centre park and winning 2-0, and a match played via ChessKid between London prodigy Shreyas Royal, 12, and New York prodigy Tani Adewumi, 10. 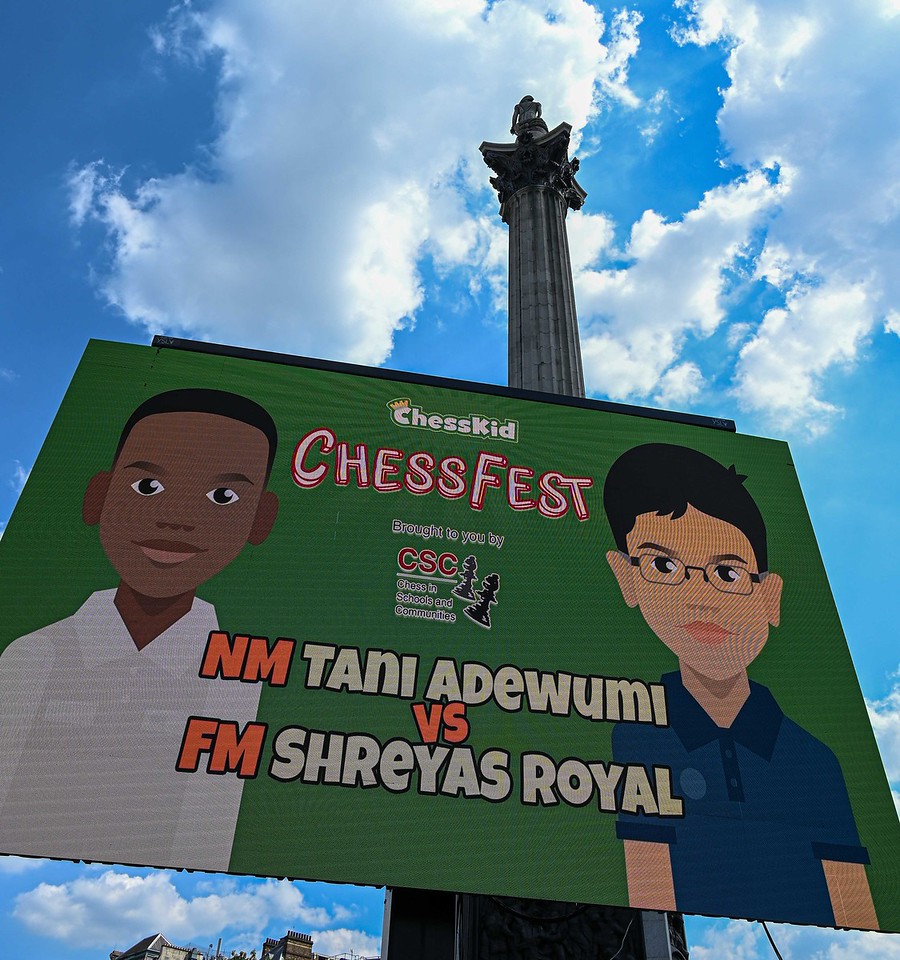 ChessFest featured a battle of the prodigies

The match was won 1.5-0.5 by Adewumi (who did have the advantage of playing from his home, while Royal was on a stage in Trafalgar Square, surrounded by noise and heat).

The first game was won by Adewumi with a devastating opposite-colour bishop middlegame attack, while in the second game, honours were even as Royal managed to force a draw by repetition in a rook and knight endgame.

Mickey and Gawain eclipsed in Rapidplay

The tournament was won by FM Marcus Harvey and IM Peter Roberson on 6/6, after GM Mickey Adams lost to Roberson, and GM Gawain Jones lost to IM Ameet Ghasi. Adams and Jones were among the chasing group on 5/6. 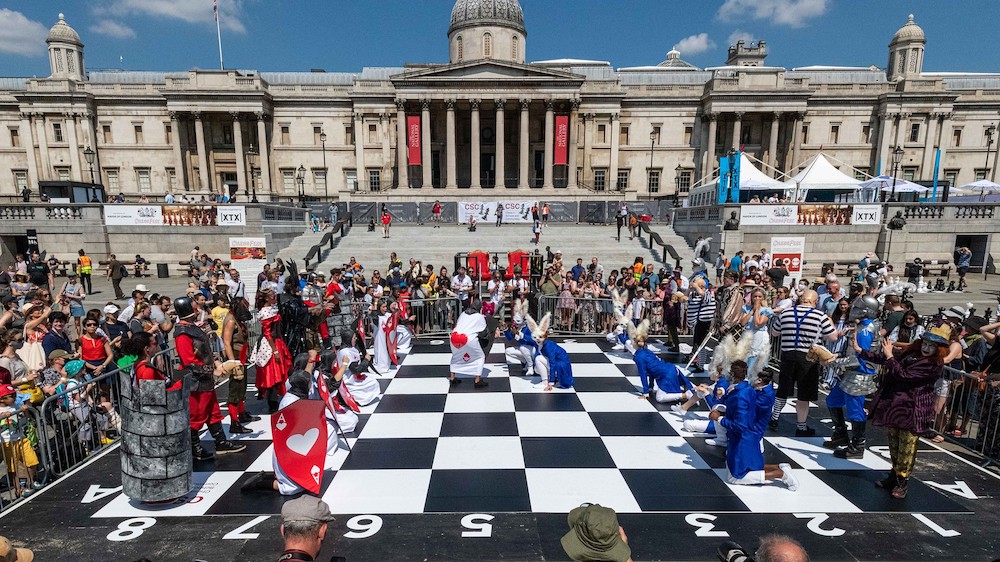 One notable feature of the tournament was the entry of several newcomers to competitive OTB chess who had previously only played online. One, 6-year-old Kushal Jakria, found himself playing England No. 1 GM Mickey Adams in Round 1!

Although he lost, Kushal put up a good fight. He had to have a cushion to help him reach the pieces, and received a crash course in how to use a digital chess clock. (Kushal finished the tournament with a very creditable 2.5/6.)

On Friday 16th, two days before the Trafalgar Square party, a total of 200 schoolchildren from London, Leeds, Middlesbrough, Bristol, Gloucester and York took part in lessons, games and other educational activities organised by Chess in Schools and Communities.

At Manchester Square Garden, kids’ tournaments and GM talks were held, while at London’s V&A Museum (named after Queen Victoria and Prince Albert) children were given a guided tour of a groundbreaking new exhibition, ‘Alice: Curiouser and Curiouser’ with a new take on the children’s classic story.

ChessFest 2021’s primary sponsor was XTX Markets, a London-based algorithmic trading company, and permission was given for the event to go ahead on July 16-18 by the Mayor of London and Westminster City Council under Covid (Step 3) restrictions.