21-year-old Spaniard David Anton beat Veselin Topalov in Round 9 of the Tradewise Gibraltar Masters to take the sole lead before Thursday’s final round. He’s been here before, since he was also the only player to take the sole lead in the 2016 Masters! The 8 players half a point back include Hikaru Nakamura, Maxime Vachier-Lagrave and Boris Gelfand, but also Ju Wenjun, who spent her 26th birthday beating Hou Yifan and crossing 2600 for the first time in her career. 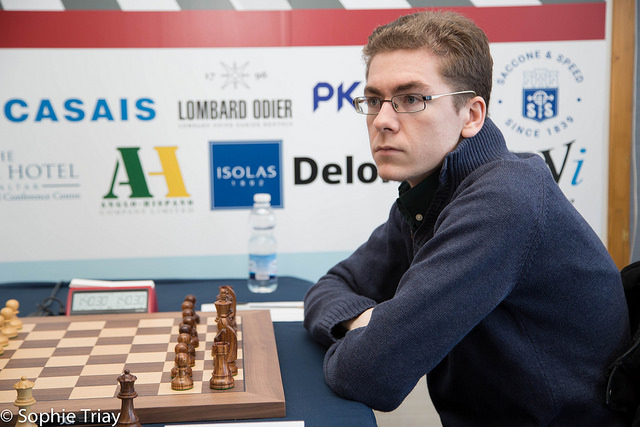 You can replay all the Tradewise Gibraltar Masters games using the selector below:

A 2nd chance for David Anton

In 2016 David Anton took the sole lead in the Masters after beating Richard Rapport in Round 7. Draws against Li Chao and Harikrishna meant that he was joined in the lead by 7 more players before the final round, when he ended up on top board with the black pieces against Hikaru Nakamura. The players' fortunes then diverged: Nakamura won the game and went on to win the £20,000 first prize in a playoff against Maxime Vachier-Lagrave, while Anton ended up in a 15-player tie for 9th place that earned him a prize in the region of £600.

This year’s event has gone even better for David, and after playing four of the Top 10 seeds he has a 2878 rating performance: 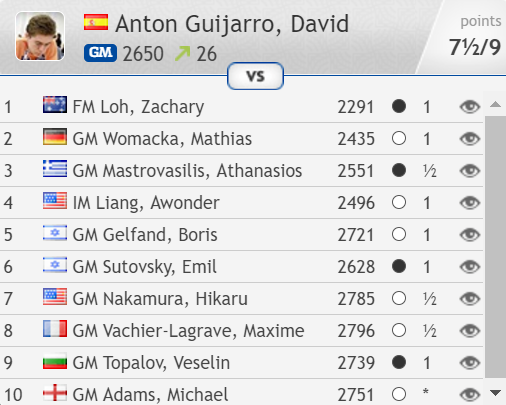 After a quick draw with Nakamura in Round 7 he was better against MVL, with 19.Bd4! a nice trick to play against the world no. 5:

He went on to win a pawn, but it wasn’t enough for victory. 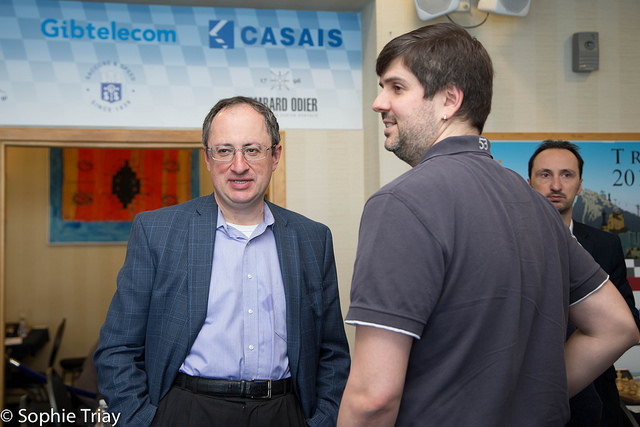 Gelfand, Svidler and Topalov are just some of the chess stars in Gibraltar this year | photo: Sophie Triay, Tradewise Gibraltar Chess Festival

Playing Black against Topalov in the following round he would of course have been satisfied with a draw, but instead the same Ruy Lopez variation he’d used to beat Emil Sutovsky once again worked to perfection:

Topalov resigned in this position, and while it looks somewhat premature, there’s no way for White to hold on to the d5 and f5-pawns.

That was a tough turnaround for Topalov, who had been the only player to win on the top eight boards in Round 8 after a “premature” attack by Emil Sutovsky. Veselin’s interview was memorable!

In fact, it was so memorable that after Fabiano Caruana had failed to squeeze out a win against Hikaru Nakamura he couldn’t help reliving it:

A longer interview with Caruana from before the event began is also well worth watching:

Caruana is now out of contention for first and had reason to lament that the pairing software had given him Black vs. Nakamura, who he trailed by half a point.

The US stars cancelled each other out in Round 9 | photo: Sophie Triay, Tradewise Gibraltar Chess Festival

Hikaru Nakamura, meanwhile, has a chance to win the Gibraltar Masters for a third year in a row, when he takes on Romain Edouard with Black in Round 10. 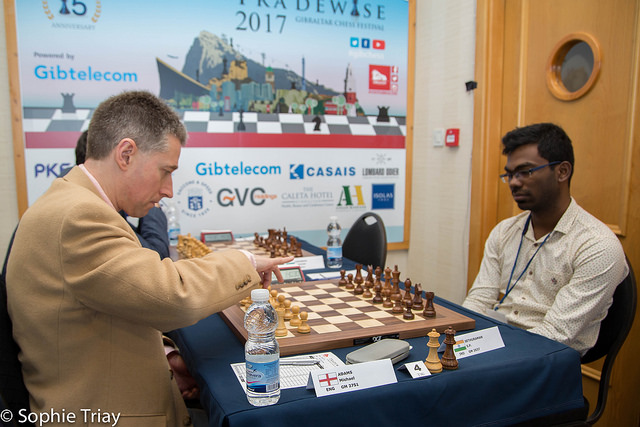 In the final round David Anton has White vs. another previous winner, the 2010 Champion Mickey Adams. The English grandmaster had one dodgy moment against India’s Sethuraman in Round 9, when the ice-cool 19…Bxf4!! would have been very strong:

Instead after the second best move 19…Qxd7 Mickey went on to weave his webs and finish in real style:

Other moves win by this stage, but there’s only one elegant way to interfere with both the black rook defending the b7-pawn and the black queen defending that rook: 44.Rf4!!

There were also impressive wins for Gelfand (over Stefanova), Edouard (over Short) and Cheparinov (over Fridman), with all the winners joining the group half a point behind Anton. 2014 winner Ivan Cheparinov took full advantage of 72…Kd6? with 73.e4!

The problem is that 73…dxe4 now runs into the petite combinaison 74.Rxc6! Kxc6 75.Bxe4+, skewering the rook on a8, while in the game the e-pawn reached e5 and White's connected passed pawns were just too strong. 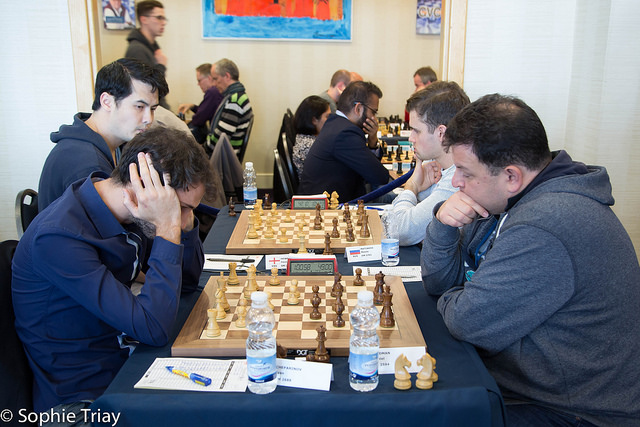 MVL and Yu Yangyi drew on top board to also move into the group on 7/9, which leaves just one player we haven’t mentioned yet…

A birthday to remember for Ju Wenjun

Here Hou Yifan could have played 32.f6! and due to the threat of Rh8+!, Qf8+ and mate on g7 White has to force a draw by perpetual check. Instead after 32.Qd5? d3! it was too late, with Black's mating threats too much even for the Women's World Champion.

That was not only a hugely important victory in the fight for the £15,000 women's first prize in Gibraltar, but made Ju Wenjun only the fifth female player ever to cross 2600 on the live rating list. She proved it was no fluke by going on to crush French Grandmaster Sebastien Maze in the following round. 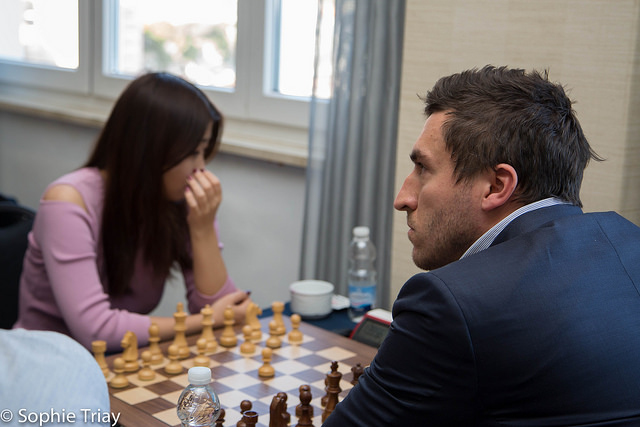 Ju Wenjun faces a tough task with Black against compatriot Yu Yangyi in the final round, with the full pairings as follows:

The fight for first is simple. If Anton beats Adams he wins with no need for a playoff. Any other outcome on the top board will leave one of the players on 8/10, which only Gelfand, MVL, Edouard, Nakamura, Yu Yangyi, Ju Wenjun or Cheparinov can match – if they win! As always in Gibraltar, a tie for first place will result in a rapid playoff.

In English you can again watch commentary with Jovanka Houska and Simon Williams, in Spanish we have David Anton’s coach David Martinez, while in German Jan Gustafsson will be covering the final day’s action. Don't miss it!