Nigel Short may have reached the venerable chess age of 51, but it’s never too late to beat the world no. 2! He overcame Fabiano Caruana in Round 6 and was spared by Peter Svidler in Round 7 to move to 5.5/7, half a point behind the leading quartet. That includes Hikaru Nakamura and Maxime Vachier-Lagrave, with the latter toppling Mickey Adam’s Berlin Wall. Spain’s David Anton and China’s Yu Yangyi are yet again performing well in Gibraltar to join them. Hou Yifan, meanwhile, posted a strong contender for Game of the Tournament with a brilliant queen sac and subsequent play. 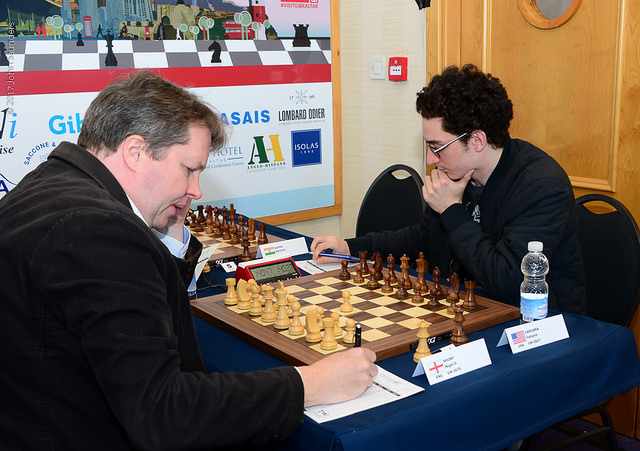 Nigel Short and Fabiano Caruana were teammates in the Battle of the Sexes the night before, but Nigel showed no mercy in Round 6. Although Caruana’s Caro-Kann got Short thinking for 15 minutes on move 5 it was Fabiano who was soon in deep, deep trouble:

Fabi saw nothing better than to jettison the d-pawn immediately and enter a miserable ending with 16…Ne7 17.Qxd4 Qxd4 18.Nxd4. The conversion wasn’t simple, with Short explaining that with Top 10 guys you really need to drive a stake through their hearts to win. He managed, taking some inspiration to win the ending from a game he won against Ivan Cheparinov in Wijk aan Zee 2008 after a famous handshake incident. 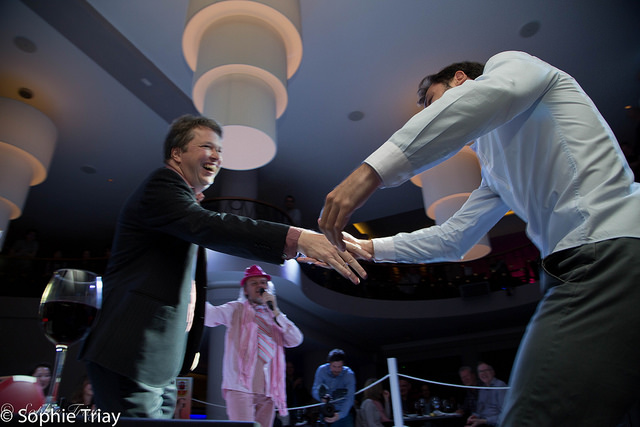 All was forgotten as Short shook Cheparinov and Topalov's hands as he welcomed them onto his Battle of the Sexes team | photo: Sophie Triay, Tradewise Gibraltar Chess Festival

Nigel has led a charmed life in Gibraltar this year, surviving a dead-lost position against Peter Lombaers in Round 1. 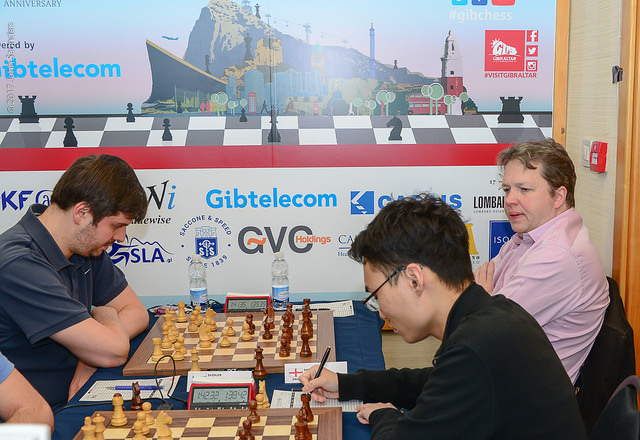 Against a better-known Peter – Peter Svidler – he also escaped the executioner’s blade. This time, though, it was anything but easy: 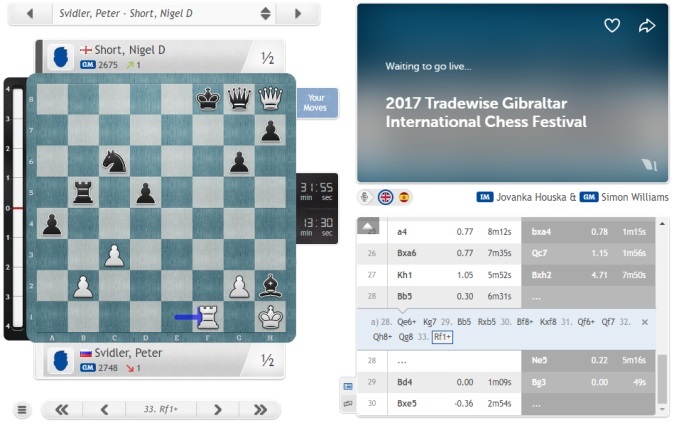 Neither player had seen it in this position, though Peter had come close:

Instead the game ended abruptly with 28.Bb5 Ne5 29.Bd4 Bg3 30.Bxe5, though the discussion continued later in the restaurant.

Elsewhere Austria’s Valentin Dragnev beat Vassily Ivanchuk, but went on to get crushed in the next round by Yu Yangyi. 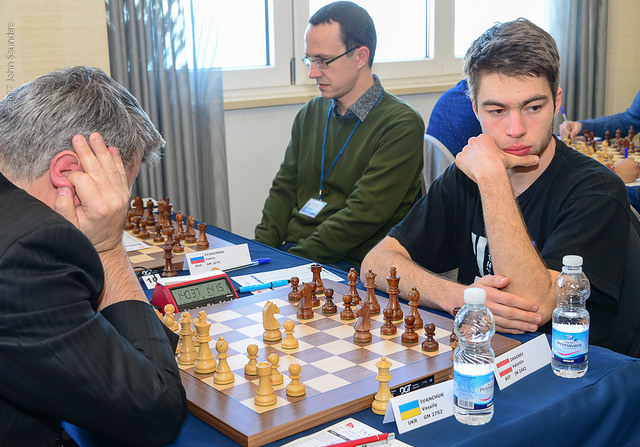 An off-day for Vassily in Round 6 | photo: John Saunders, Tradewise Gibraltar Chess Festival

The Chinese player’s co-leaders Hikaru Nakamura and David Anton drew by repetition in 14 moves in Round 7, which was a big improvement for David on 2016, when a loss to Nakamura in the final round ruined his tournament and cost him a lot of money. 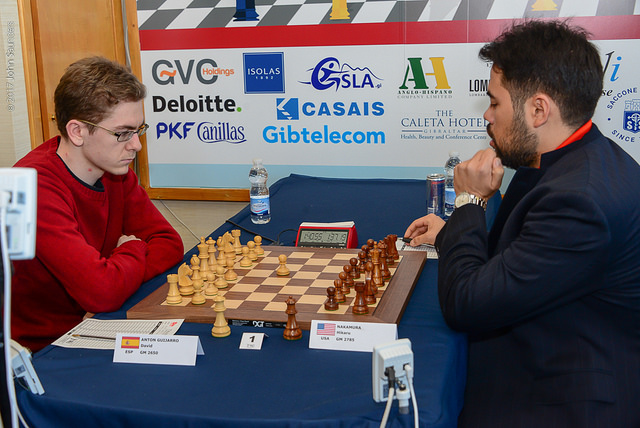 Anton had previously followed his win over Boris Gelfand by beating Emil Sutovsky in style with the black pieces.

The final leader is Maxime Vachier-Lagrave, who has never won the Tradewise Gibraltar Masters, but has come very close. He remains one of the few top class players who still has the stomach to take on the Berlin Wall endgame, and you can see why, since with a typical e6-break he managed to overwhelm English no. 1 Mickey Adams:

The pawn can’t be taken due to the simple 32…Kxf7 33.Rd8! – pinning and winning – but after 32…Kf8 33.f5! the white minor pieces were wreaking havoc on the board. 33…Bxf5 may have been the losing move according to the computer, but its recommended 33…Rxf5 is also no walk in the park. 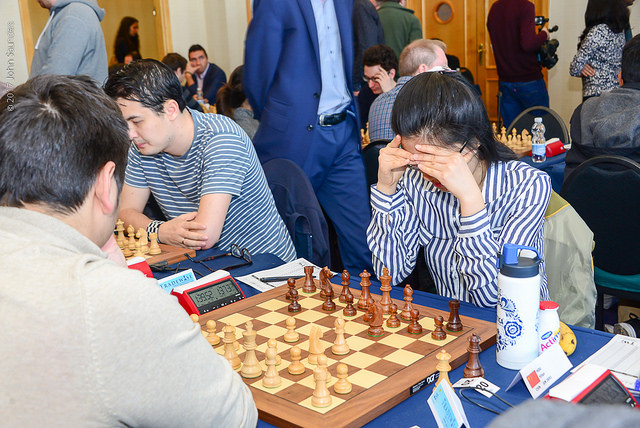 We can’t end this look back at Rounds 6-7 without taking a glance at the game Borya Ider vs. Hou Yifan, which was sensational almost from start to finish. The Women’s World Champion here went for a fantastic queen sacrifice:

Black has only two minor pieces and a pawn for the queen, but it’s a very difficult position for White to play. What helped make the game a classic, though, is that Borya also found a lot of very good moves, starting with 21.e4!? here.

Even after what was objectively the losing move on move 42, the lines that followed were crazily complicated, culminating here: 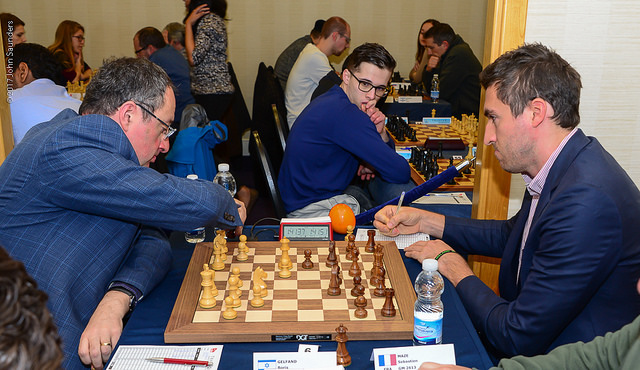 If you're looking for another beautiful game check out Gelfand-Maze in Round 7, where Boris managed to weave a mating net with very limited material left on the board | photo: John Saunders, Tradewise Gibraltar Chess Festival

So the standings look as follows with just three rounds to go:

You can see all the previous results and pairings/live games using the selector below: