The 2017 Tradewise Gibraltar Chess Festival has confirmed what we already knew: every round of the world's best open provides drama, exciting match-ups and tactical shots of all kinds, meaning there's always something for spectators to follow. After five rounds six players lead with 4.5 out of 5, with only Hikaru Nakamura and Mickey Adams among them counting as pre-tournament favourites. We're also bringing you Peter Svidler's 47-minute analysis of his thrilling draw in Round 3. 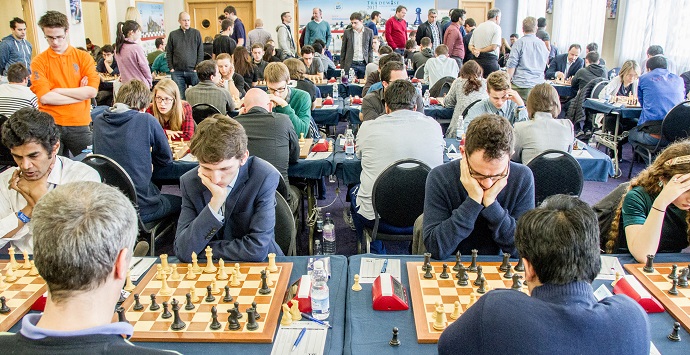 The packed playing hall with the top players in the Tradewise Gibraltar Masters | photo: Jose Huwaidi

The overlap of the Gibraltar Masters with the traditional Tata Steel Tournament in Wijk aan Zee has inevitably led to comparisons as to which offers more to spectators. The presence of Magnus Carlsen in the Netherlands is hard to compete with, but the events in Gibraltar have arguably offered more drama. Luckily, though, we don't need to choose and can enjoy both!

After five rounds we've seen almost everything. For Spanish chess fans it was thrilling to watch as David Antón overcame none other than Boris Gelfand in a complicated rook ending. The following position fixed itself on the retina of the spectators:

The "normal" moves to bring the king closer to the pawn in order to queen it as soon as possible don't lead to victory due to counterplay on the kingside. David instead mixed precise calculation and technique to find the only winning move 64.Rc7!, the idea of which is to achieve the Lucena position and construct a bridge. In this way it's possible to prevent Kg5, since after 64...h5 65.Kb5 the move 65...Kg5 would be met by the precise Rc5+!, once more establishing the bridge if the black king advances. In the remainder of the game Antón was able to win a textbook ending:

70.Rc4! cut off the black king and put an end to all Black's counterplay. 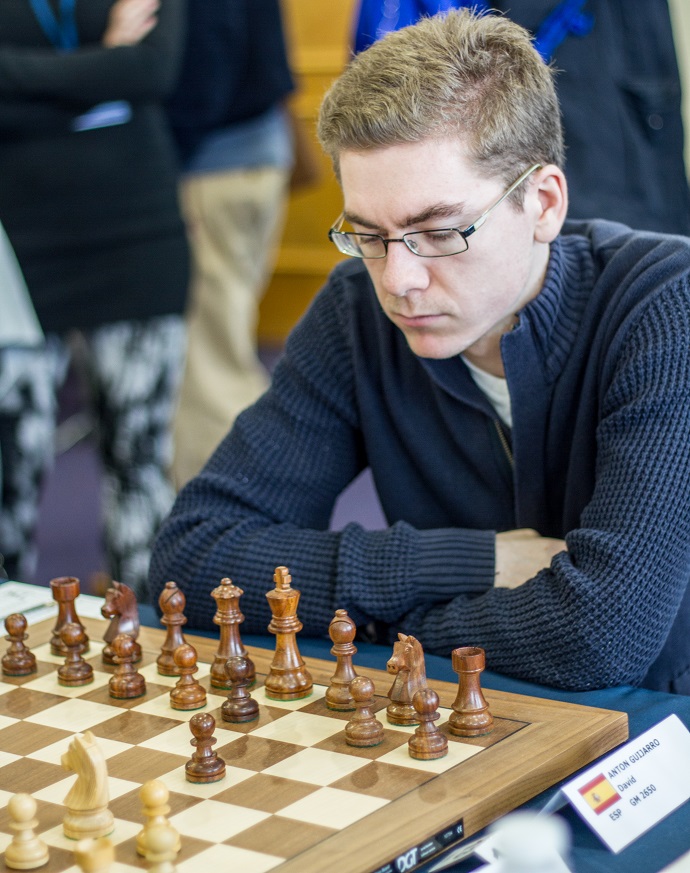 David Antón was leading going into the last round of the 2016 Gibraltar Masters, but lost his final game to Nakamura | photo: Jose Huwaidi

Apart from that game Boris Gelfand seems to have been enjoying his time in Gibraltar, and gave an excellent long interview to Tania Sachdev:

Other favourites have also had a tough time so far in Gibraltar, with Peter Svidler conceding three draws. He hugely enjoyed one of them, though, since his game with Israeli IM Nitzan Steinberg was wild.

After that postmortem Peter went back to his hotel room and filmed another 47-minute postmortem that we can all now enjoy:

One of the pleasant surprises of the tournament has been the fine performance by women's world no. 2, Ju Wenjun, who's approaching 2600 fast. In Round 3 she needed only 22 moves to beat Ori Kobo, trapping her opponent's queen in the centre of the board!

Later she took advantage of a huge blunder by Shankland in order to move to 4/4 and then draw with Emil Sutovsky in only a few moves in Round 4. A "rest day" with the excellent excuse of the Chinese New Year!

On the same number of points is Emil Sutovsky, who beat Pepe Cuenca after the latter rejected a draw offer! The player who is impressing most so far among the leaders, though, is Hikaru Nakamura. He scored convincing wins with the black pieces against young Hungarian player Gledura and Venezuela's Eduardo Iturrizaga, and also found time to give a longer interview to Tania Sachdev:

Michael Adams beat Hou Yifan after a complex exchange of blows, though there were no hard feelings.

The sextet is completed by French player Maxime Lagarde, who beat his compatriot Laurent Fressinet, demonstrating fine technique in a queen ending. 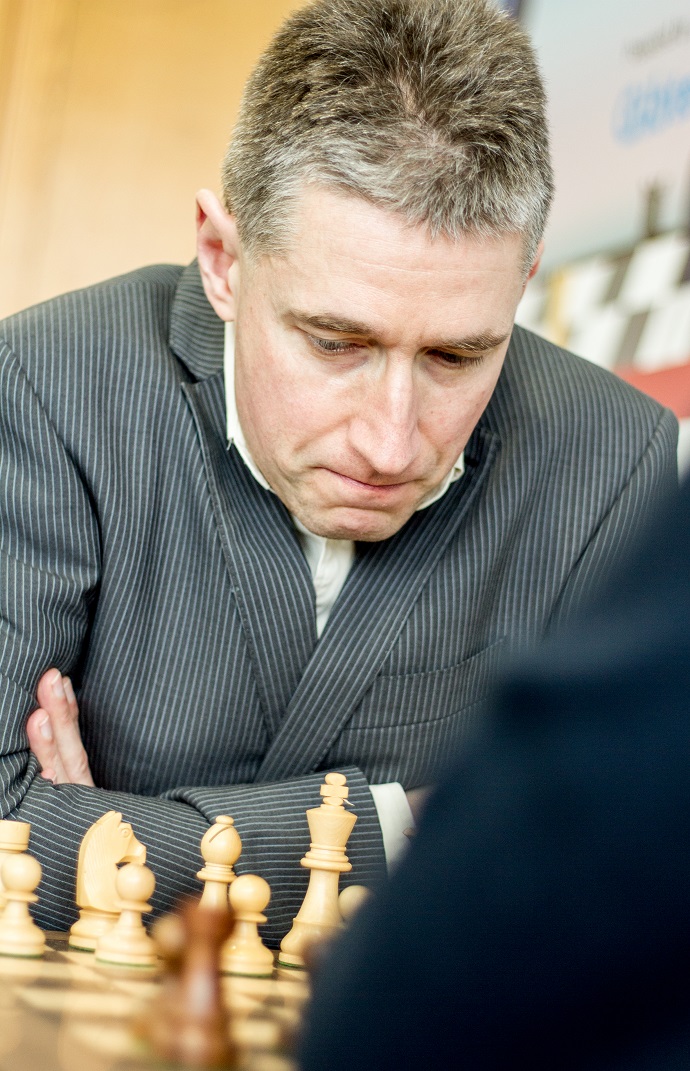 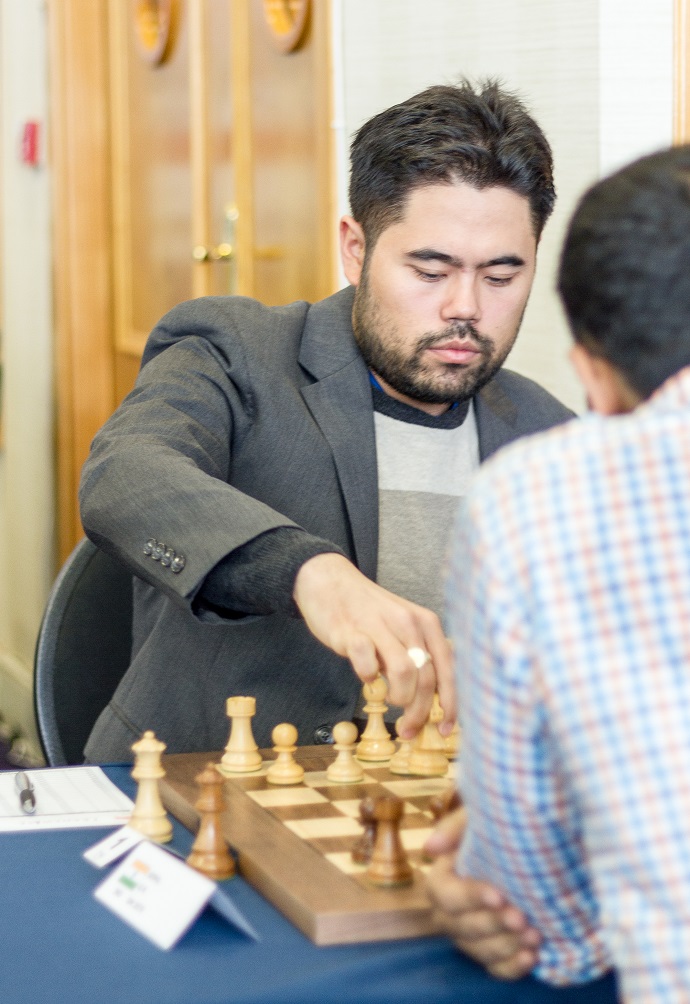 Fabiano Caruana and Maxime Vachier-Lagrave are having to battle to stay towards the top. Both suffered badly in the second round and haven't had things much easier since. The US no. 1 had trouble drawing Vocaturo in Round 4, while in Round 5 he needed to fight hard to break down Antipov's fortress in a game where he always seemed to have an edge but in which his play wasn't entirely convincing. In Round 6 he'll play Nigel Short, who he beat in an earlier blitz game... 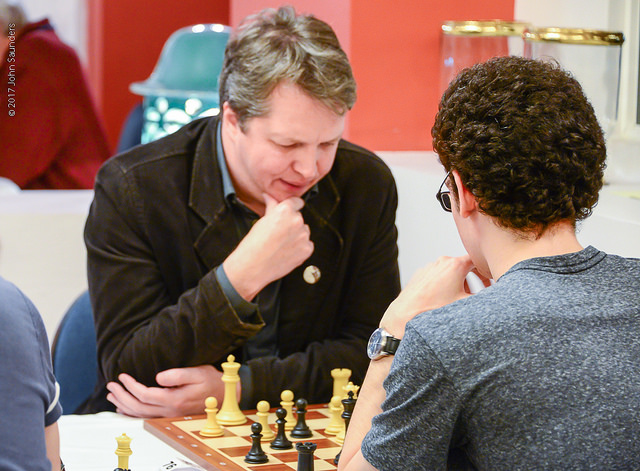 Short and Caruana met a couple of days ago in the team blitz event... | photo: John Saunders, official Flickr account

Nigel's win against Grigoriants is an early contender for the £1,000 prize for the best game of the tournament.

Maxime Vachier-Lagrave, for his part, had a rollercoaster Round 4 against Piorun, while in Round 5 David Howell surprised him with an interesting novelty involving a positional pawn sacrifice that posed Black problems. Maxime failed to respond in the best manner and soon had to return his extra pawn...

There doesn't seem to have been anything wrong with 19.Rxc6, regaining the pawn and maintaining the pressure on the black position due to superior piece coordination. Instead he went for 19.Rd3?!, allowing the French no. 1 an original defence 19...Re8! 20.Bxe5 Bf6 21.Bxf6 Rxe4+! which enabled him to equalise - that's precision for you! 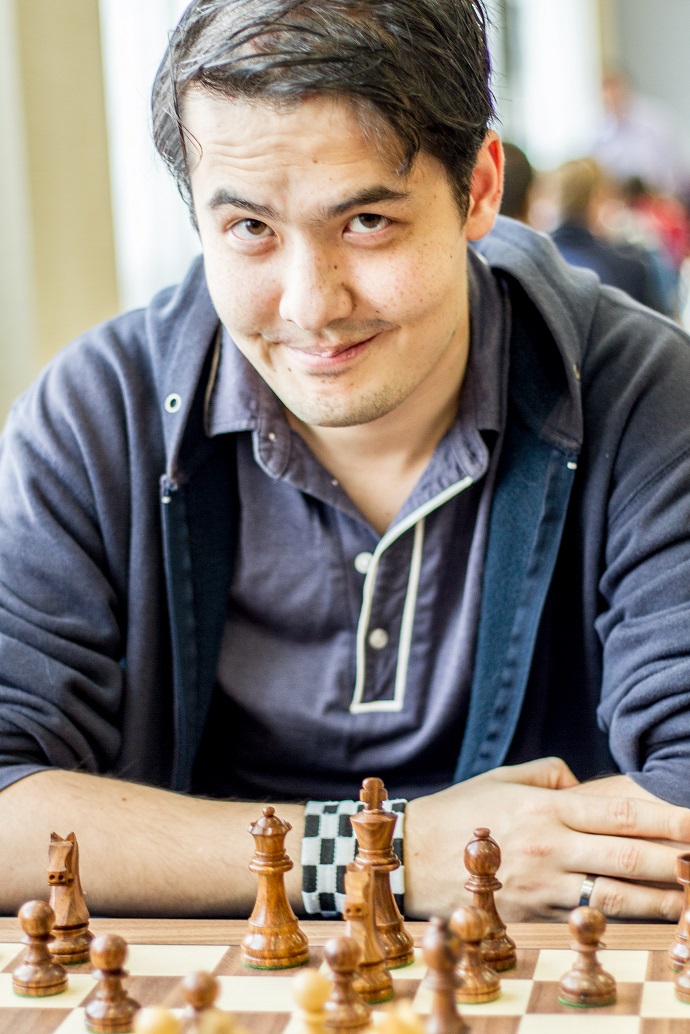 Of course the Gibraltar Chess Festival isn't only about the chess, with the social programme including the famous Battle of the Sexes, which you can watch below: