The second round of the 2017 Tradewise Gibraltar Masters came packed with surprises. Only two of the seven theoretical favourites managed to win their games on the top boards, and it could have been worse! The greatest drama was the loss on time for Vassily Ivanchuk, who turned out to have written down his moves badly... 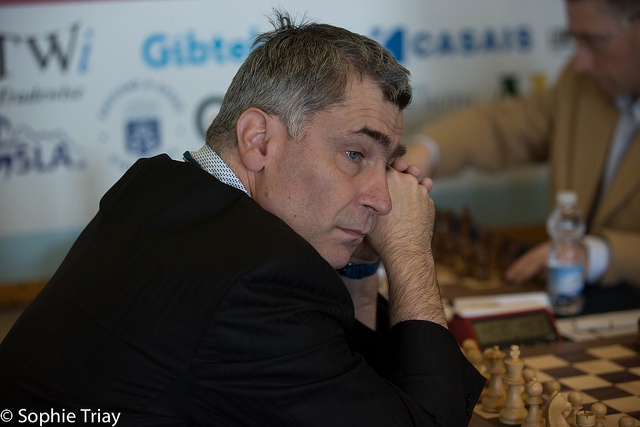 It's only in an open like Gibraltar that you can see the world's best players suffer so much only in the second round. Almost right from the beginning we got to witness the ratings favourites suffer against a series of strong masters who had them on the ropes. Let's took a look at some of the encounters.

The young Argentinian International Master had Caruana under pressure almost from the start. A Chebanenko Variation led to a lack of space for the world's no. 2, which Krysa immediately took advantage of to launch his f-pawn up the board and open lines, while the black pieces remained rooted to the back rank! White committed only one mistake... which cost half a point!

Krysa wanted to finish in style with 21.f6?, cutting the bishop out of the defence. It certainly seems as though there's no way to save the black king, but Fabiano immediately responded with 21...Rd3!, forcing White to give a perpetual check, since the threat is that the black queen will come to h3. A great saving blow! No doubt Krysa saw that after 21.Rg1+ Kh8 22.Qxf7 Rg8 Black could hang on, but instead the quiet 21.Rf2!! would decide the game with the threat of bringing the other rook to g1 and then breaking through on f7... The difference this time is that the f5-pawn always remains defended by the f2-rook. Black, passive and uncoordinated, would be able to do nothing to prevent White's plan. As so often the advice is "to invite everyone to the party!" The a1-rook would have been glad to take part in beating the world no. 2...

An extremely complicated game that started as a Sicilian with a check on b5 only to become a position more typical of the Ruy Lopez. Maxime Vachier-Lagrave allowed one of Steinberg's knights to take control of the c4-square, which stifled his own play. When that was combined with an f5-break and precise play the French no. 1 was left on the ropes. Perhaps Steinberg's worst move was to accept a draw in the following position...

Playing Black and having the chance to repeat moves with Nb2-N2c4 it's difficult to resist! But the capture of the central pawn with 29...Nxd5 would have posed MVL grave problems. 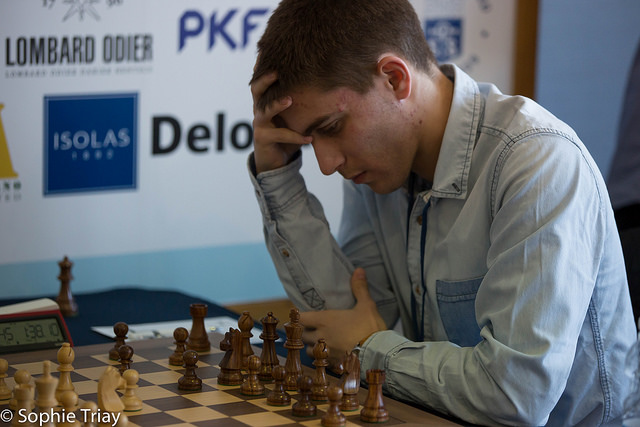 The young Seville player has been making great strides. Against a Classical Sicilian played by Hikaru Nakamura he showed good preparation and positional understanding and also had Hikaru on the ropes. The key moment came in the following position...

Miguel chose 18.hxg7 which allowed the position to be simplified after 18...Nxe4 and Nakamura finally went on to win an equal ending. Better was 18.f3 and after the normal 18...g6 White would continue with g4-Bd4-g5 and pushing the f-pawn. Although there would of course still have been a lot of play ahead the white attack looks very dangerous! In any case, a fine game by Miguel Santos, for whom this won't be the only time in his career he faces off against a world top 10 player. 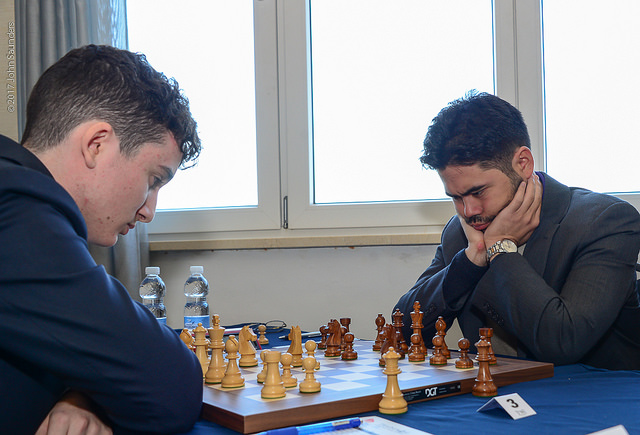 The misfortune of the day was suffered by the brilliant Vassily Ivanchuk, who achieved a clearly superior ending after displaying fine technique. When he just needed to make one more move to cross the time control he let his clock run down, thinking he'd already reached move 40... The explanation: while noting down the moves on his scoresheet he'd skipped move 24! 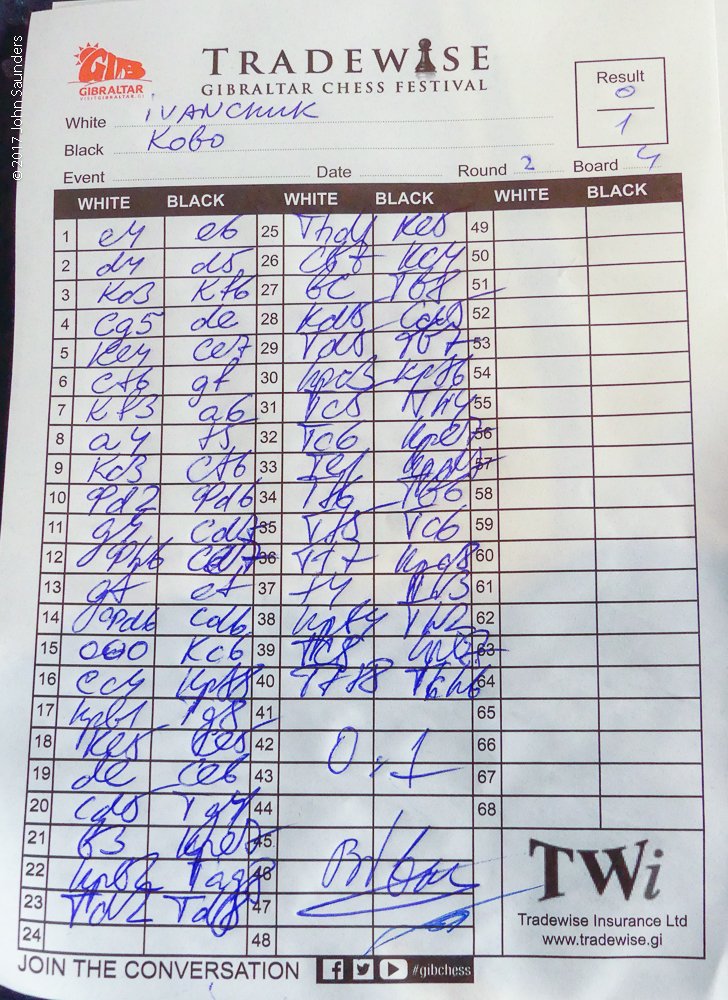 At the bottom of the column on the left you can see the error that was to cost Ivanchuk a point... | photo: John Saunders

An unfortunate incident that we hope won't affect Ivanchuk's play in the upcoming rounds. His opponent was apologetic:

Those weren't the only surprises... Svidler and Topalov also conceded half a point, while Vitiugov managed to defeat Elisabeth Paehtz in a game that could very easily have gone the other way!

The Russian player was trying to rustle up an attack on the kingside, but with the simple 22.Nxg3 that would have been thwarted. It's not clear how the game would have continued, but with the black attack gone the white attack would have grown! Instead Paehtz played 22.Bg5, which also retained an advantage, but after 22...h4 23.h3 Qd7 complications arose in which Vitiugov ultimately emerged victorious.

In summary, a very surprising day, that was rounded off with a Masterclass with Veselin Topalov:

Round 3 sees all-GM clashes on the top nine boards and many Round 2 heroes getting another chance to face the world's very best: