The Ukrainian Championship started yesterday, with Women’s World Champion Mariya Muzychuk choosing to compete against eleven strong male grandmasters. That promised to be fascinating to watch, but then a shock – the games were not only not being broadcast live, but the plan was not to publish them at all! One explanation given, as a Ukrainian chess24 user confirmed after talking to the tournament director, is to hide Mariya Muzychuk’s games from her World Championship rival, Hou Yifan. 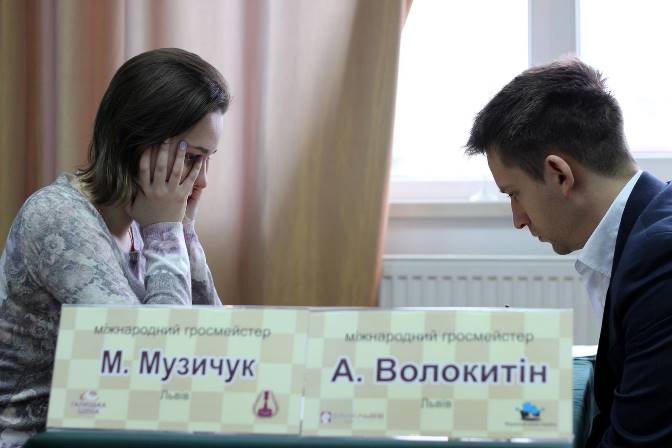 World Champion Mariya Muzychuk drew against Andrei Volokitin in the first round of the 2015 Ukrainian Championship, though the moves of her game were a carefully guarded secret | photo: Ukrainian Chess Federation Facebook

Everything was set for the tournament to start. The attractive official website was only missing the live games link to appear, and then we could show the games here on chess24. Well, we got the pairings, and eventually the results…

…but, as you’ll see if you click on the games, there are no moves. It may be that we'll have to hide the tournament as a live option on our site.

UPDATE: Although there's still no live broadcast, the games of all the players except Mariya Muzychuk have now been published. 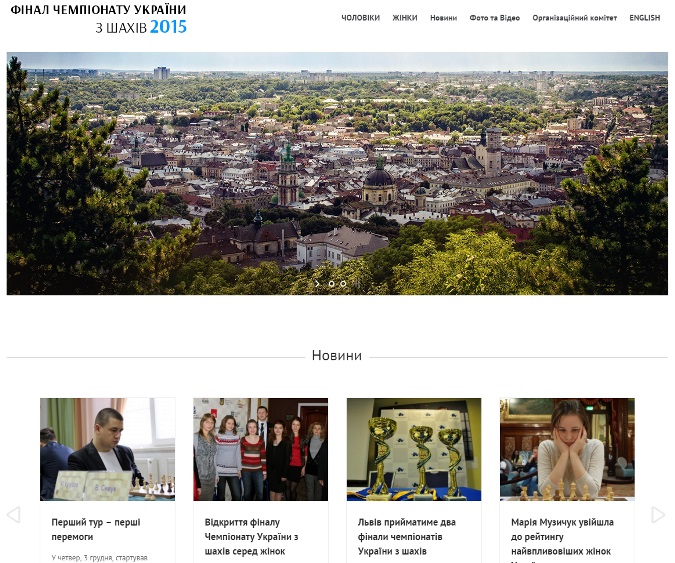 The Ukrainian Championship is a very strong event, even if this year’s version is missing some of the top players, with Vassily Ivanchuk and Pavel Eljanov playing in the ACP Masters in Israel from 7-10 December and Ruslan Ponomariov also absent. 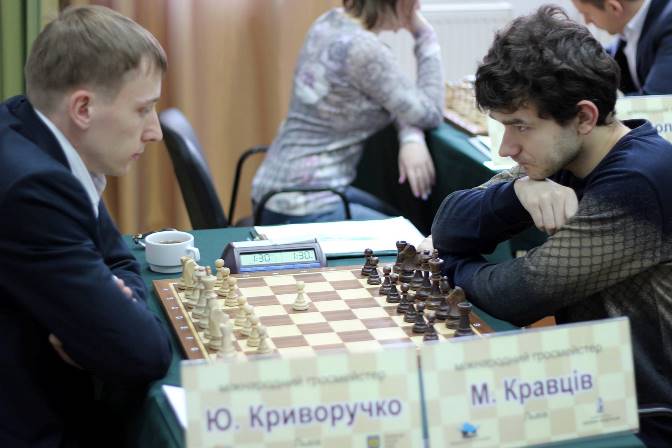 Eljanov nevertheless tuned in to watch, writing on Facebook:

And where are the games of the Ukrainian Championship? Are they really playing on rubber boards? I’d like to joke with the well-known anecdote: it’s better to watch than to play; it’s even better to watch those watching

But for now it’s not possible to watch anything at all.

That situation didn’t change, and we were left with two ways to learn about what happened in Lviv: photographs (on Facebook some asked for the photographer to capture the boards, ideally after every move!) and a description published in Ivan Yaremko’s first round report:

On Thursday, 3rd December, the first round of the 84th Ukrainian Championship started with 12 grandmasters taking part: eleven men and one women, but who?! – Women’s World Champion Mariya Muzychuk. Her game against fellow countryman Andrei Volokitin of course attracted the most attention. The players created a really interesting picture on the board, where Mariya had the white pieces. As often in the Sicilian Defence, the players prepared to attack on opposite flanks. The first to undertake active measures was White, who tried to conduct an attack on the black monarch. At some point it seemed as though White would crash through, but Volokitin calmly found the precise responses and his king felt safer and safer. Black ultimately decided to give up both knights for a rook and pawn. It wasn’t clear how the game would develop further, but after some thought both players decided to share the point. The position was too risky to play on…

So what was the explanation? Ukrainian chess24 user and journalist Bohdan Kovalchuk got in touch with Tournament Director Nazar Firman, who explained that the main issue was financial:

USD 14.28 was allocated by the Ukrainian Ministry of Youth and Sport for accommodation and food for the players – and that was the end of financial support from the state. The remaining sum had to be covered by the Lviv Regional Chess Federation. Therefore if anyone has the desire to help organise such a tournament there’s a wonderful chance next year.

That wasn’t the only reason, though. Mariya Muzychuk will defend her World Championship title against Hou Yifan in the same city, Lviv, in March next year. Firman explained:

At first we decided only to hide the games of Muzychuk, in order to complicate the work of the Chinese player’s coaching team. However, the remaining players, learning of that step by the organising committee, also decided that their games should get into the world’s chess databases as late as possible.

One player stood out from the crowd before the Ukrainian Championship! | photo: Ukrainian Chess Federation Facebook

So far that information embargo seems to be holding, although it’s almost unprecedented to hide normal tournament games played by grandmasters of this stature. Ukrainian Grandmaster Mikhail Golubev was initially sympathetic on his Russian Twitter account:

To everyone demanding the broadcast of the Ukrainian Championship games: are you sure you paid for that service? I didn’t pay, so I can’t demand anything.

Later he added, though:

When it comes to the broadcast, let it be, but not publishing the games even after the round – crazy.

We’ll keep an eye on the tournament and start including the games if they turn up. For now, though, Hou Yifan’s team know they should be ready for Mariya Muzychuk to play variations of the Sicilian with opposite-side castling