Chess superstar Peter Svidler gives a running commentary as he plays blitz for an hour and a half, the Top 10 blunders in World Championship history and the minute that could have changed chess history during the second Carlsen-Anand match! We take a look at the five most popular videos on the chess24 YouTube channel.

In a little over a year the chess24 YouTube channel has grown to over 600 videos and acquired a following of nearly 9,000 subscribers, so we thought this might be a good time to take a look at the videos that currently top the popularity list:

They say videos should ideally be short and feature animals doing ridiculous, or ridiculously cute, things… so it’s great to see this video leading the way on sheer merit! It’s hard to imagine anything much better than Peter Svidler – one of the most engaging personalities in world chess and the king of post-game press conferences – commentating live on his moves while he plays. This March he did it for 96 minutes in a video that’s currently been watched by chess fans for more than 1 million minutes! 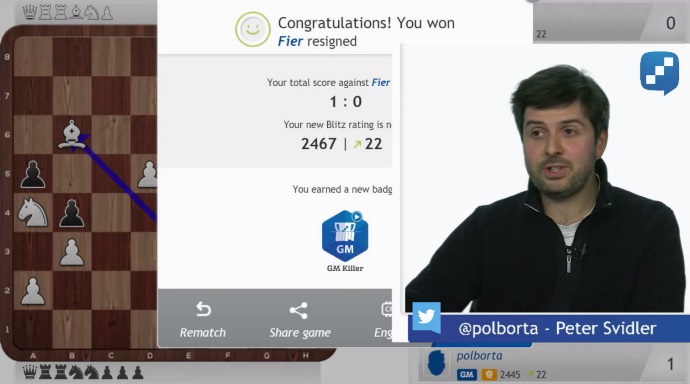 The video is full of great chess but also some hilarious moments, including at 19:35, when Peter beats Brazilian GM Alexandr Fier: "And I’ve earned a new badge, apparently – GM Killer! How proud I am. Words cannot describe"

If you want more Svidler check out:

Blitz is often tough to follow live, but when you add a chessboard to the video to show exactly what’s happening, including even the swings in computer evaluation, then it becomes compelling viewing. Of course it helps if you have two star players and the game ends in a surprise mate!

If we chess fans search deep inside our souls it’s possible we prefer blunders to brilliancies, since they’re so much easier to identify with! Grandmaster Jan Gustafsson takes a look at famous blunders made when the stakes couldn’t have been any higher.

Of course this is one video that invites controversy – do you agree with Jan’s choices?

4. The minute that could have changed chess history

Game 6 of the Carlsen-Anand rematch. Magnus was in complete command of the game, until he made a blunder that left him with a lost position. After a minute of enormous tension Vishy failed to spot the blunder and went on to lose a tragicomic game.

The English and Russian live broadcasts on the game picked that precise moment to take the worst-timed commercial break in modern sporting history, but our Spanish commentary team was still live. The reaction by Spanish no. 1 GM Francisco Vallejo and IMs Lawrence Trent and David Martínez was priceless. Knowing Spanish is a bonus, but completely unnecessary to grasp the drama:

When Garry Kasparov appeared alongside Jan Gustafsson and Lawrence Trent on the live broadcast from the 2014 Chess Olympiad in Tromsø he was in the middle of an acrimonious campaign to be elected FIDE President. You might have thought, therefore, that it would be all politics, but instead arguably the greatest player in the history of chess provided great commentary on the chess action in Round 5, which including Kramnik beating Topalov and Ivanchuk imploding against Kasimdzhanov.

And finally, one bonus track:

This video just missed out in terms of the number of views, but if you sort instead by likes it’s up in third place. Jan Gustafsson provides a 32-minute masterclass on how World Champion Magnus Carlsen beat his closest rival, Fabiano Caruana, in the 2015 Tata Steel Chess Tournament in Wijk aan Zee.

Jan is producing daily videos on the FIDE Grand Prix for chess24, while other recent highlights include Banter Blitz with Miss Tactics (Sopiko Guramishvili) and Miss Strategy (Anna Rudolf) and a Q&A with Sopiko and Anna hosted by Lawrence Trent. Keep up-to-date with it all by subscribing to our channel: